All Is Not Lost

It’s always easy to moan about “how it used to be” and “what’s been lost,” particularly because that attitude validates nostalgia as An Excellent Filter Through Which to Assess the World.

Nostalgia’s whole modus operandi is one of superiority. Nostalgia, that sly vixen, slides into our psyches and whispers, “Aren’t I preferable to what you have now? Don’t you wish we could be together again? Wasn’t I the best thing you ever had?”

Perhaps it’s Nostalgia’s ability to sow discontent that can make me impatient with her. When I listen to someone recount tales of youth, back when kids actually went out of doors, back when kids weren’t in front of screens all day, back when people were nicer, back when times were simpler, my internal monologue goes something like:

When I was young, I went outside sometimes. Other times I stayed inside and read, made cookies, or watched television. This business about “We went out at sunrise and didn’t head back inside until sunset, and the only thing we put into our bodies during that time was a few hot sips of water right out of the garden hose” sounds suspect to me. Really with the 14 hours a day of madcap romping with the neighborhood kids? You found snake skins and collected rocks and made forts, every day, all day, for, um, 90 days straight? If we’d followed you around with a video camera every day, all day, for 90 days straight, I’ll bet a more complicated story would emerge. I’ll bet sometimes you were inside, and you were listless and annoying, and sometimes, when you weren’t out scaling 200 foot cliffs, you were crabby–and if you spent all day outside, it’s because your poor mother was screaming inside her skull and pushed you out the front door and locked it, lest she sharpen the kitchen knives on your shinbone. I’ll wager you drove your parents up the wall with your constant “I’m hungry. There’s nothing to eat” and “I’m bored” and picking fights with your siblings. You know what else? Of course everything was sunlit and fun in your memories of being six BECAUSE YOU WERE SIX and that’s the nature of a six-year-old’s brain. Of course life was better when you were six…YOU WERE SIX. It was a simpler time BECAUSE YOU WERE SIX and hell if you had a job or bills to pay or relationships to manage or forms to fill out or meals to cook.

As Nostalgia continues to pour out of the speaker’s mouth, I muse:

When I think of my childhood, I have lots of memories of playing with the neighborhood gang of kids–roaming the neighborhood on our bikes and climbing around those fabled 200-foot cliffs by our houses and whooping down the Slip ‘N Slide and going crazy with joy when a huge rain would fall, after which the streets would be flooded. I have all that. At the same time, Nostalgia, I refuse to accept, part and parcel, your version of events. Because our parents often weren’t home, or if they were, they were inside, all those hours of playing outside were ripe for bullying. Some of the meanest moments in my life occurred during the hours you’re trying to pass off as “Better.” In fact, because you are an unreliable narrator, Dear Nostalgia, I have to break it to you: I’m okay with the present. I don’t need to moan about how kids these days are missing out. Truth be told, my kids spend more time outside than I ever did; they have limits on their screen time–and I would argue that their screen time brings them many rich rewards and developments; they are addicted readers; they are kind; they are thinkers; their lives are not diminished by technology. In fact, when the grousing voices start harping on how social media is ruining our lives, I object. Social media has created many new relationships, has rekindled friendships that had virtually died off, has given me insight into the daily existence of people I care about, has made writers out of people who otherwise never would have taken words from their heads and expressed them. Yes, I realize the messages being written generally don’t adhere to the rules of Standard Written English; for me, whose job it is to be a standard bearer of the rules, this can be troublesome. On the other hand, I also glory in the dynamism of language and can’t fault a new world of communication that has made writers of us all. When I get bogged down in the lack of rule following that happens, I become guilty of something that has been beautifully coined as “vigilante peeving.” Truly, to follow that popular line of griping and sighing about The World Today and How Good It Used to Be is too pat for me. I’m not willing to believe that things used to be better. If I fall into you, Nostalgia, then I’m denying my abilities as a critical thinker. Honey, I just can’t let you win that battle.

Every time I get faintly ranty and the tiniest bit breathless, we know a BUT is coming, right?

I do think something lovely is being lost with the death of traditional letter writing. Right now, I’m reading Book of Ages, which focuses on the letters exchanged between Benjamin Franklin and his sister Jane. Their letters reveal a relationship that would otherwise have been lost to history, and they reveal many new realities about both a famous man and the lives of 17th Century women. As we know, to write a letter on paper is dramatically different from composing an email. Thought, feel, texture, reflection, mood–all are diminished in an email or online communication. Putting the pen or pencil onto paper creates an atmosphere between author and recipient that can’t be replicated in other formats.

Trust me: I’ll get over it. The present isn’t bereft of memory storage. It’s just that their personal archives will take different shapes, and those shapes will be full of richness that we don’t yet know how to see.

My nostalgia for letters had a happy moment–clap hands, Nostalgia!–the other day, though, when my cousin sent an email containing an attached .jpg. It turns out Paco had been given an assignment at school, to “write a friendly letter to a friend,” and then the teacher mailed those letters to the intended recipients.

We had no idea about this assignment, which surprised me, as Paco generally likes to relate his goings-on. Thus, it was an unexpected delight to read his missive to his cousin, Elijah. These boys are technically second cousins, but beyond lineage, they’re quite simply very good friends.

Here’s the image my cousin, who enjoyed the letter a great deal himself, shared with us: 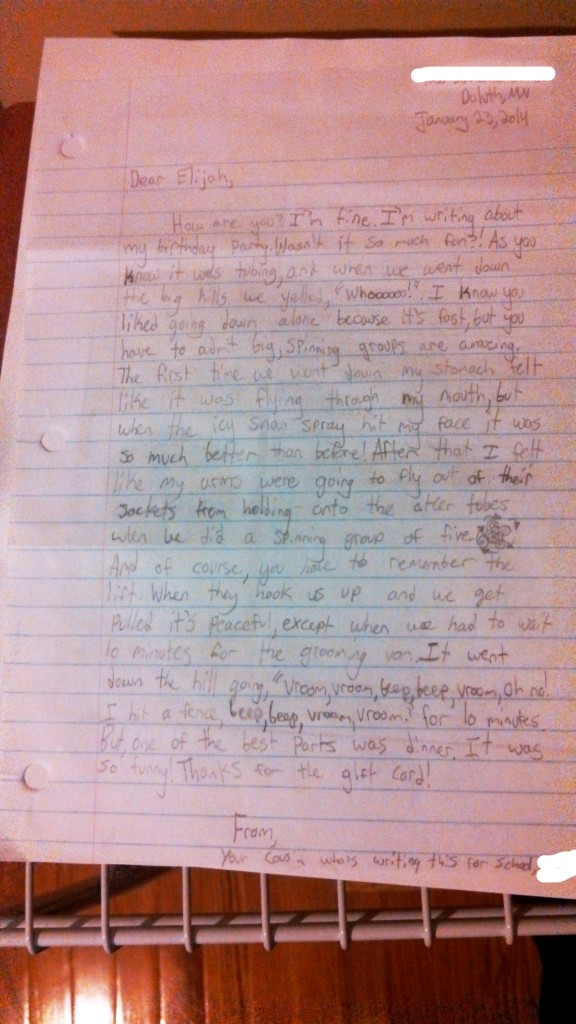 I know the image is hard to read, so here’s what Paco wrote:

How are you? I’m fine. I’m writing about my birthday party. Wasn’t it so much fun? As you know, it was tubing, and when we went down the big hills we yelled, “Whoooooo!” I know you liked going down alone because it’s fast, but you have to admit big, spinning groups are amazing. The first time we went down my stomach felt like it was flying through my mouth, but when the icy snow spray hit my face, it was so much better than before! After that, I felt like my arms were going to fly out of their sockets from holding onto the other tubes when we did a spinning group of five. [hand-drawn picture] And of course, you have to remember the lift. When they hook us up and we get pulled it’s peaceful, except when we had to wait 10 minutes for the grooming van. It went down the hill going, “Vroom, vroom, beep, beep, vroom, oh no! I hit a fence, beep beep, vroom, vroom” for 10 minutes. But, one of the best parts was dinner. It was so funny! Thanks for the gift card!

Your cousin, who’s writing this for school

So, yes, Nostalgia, you wily minx, you got me. I read this letter, and it made me so happy. Now we have a very special record of our fifth grader’s writing, and we have a recap of his 11th birthday party, and we have the softie warm hearts that come when parents get a glimpse into their children’s heads.

no one ever personifies a snow groomer.