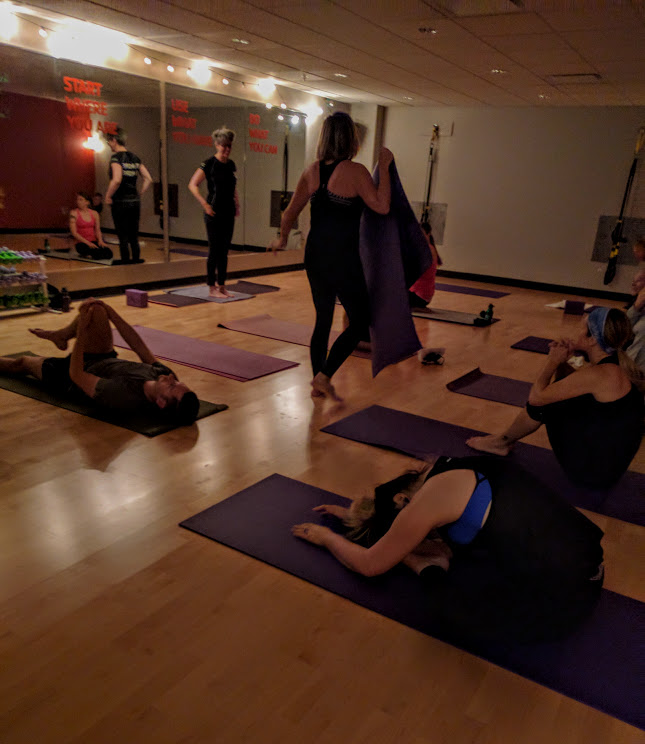 And I’d been sleeping so deeply, too.

But then came the moment when my bladder was so full my brain started to surface, and my body’s first impulse, a sort of readying itself to stand, was to roll over.

Holy mother of lightning in the fascia.

Pain radiated from seven different places in my right shoulder — the shoulder I had NOT been sleeping on all night. If I put my arm to my side, pain. If I curled my elbow, pain. If I tried reaching above my head, pain. If I pushed upright to seated, pain. When I reached for toilet paper, pain.

The location of the pain was familiar. Infrequently but regularly throughout my lifetime, I’ve suffered from a pinched nerve in my shoulder and clavicle. Usually, it lasts for a few hours, rates about a 2 on the pain scale, and then recedes. Always, I have dismissed it as a side effect of boob poundage being harnessed through straps cutting into my shoulders. So, y’know, the pinched nerve has always been a thing that’s not a thing.

But the other morning, with that roaring wake-up, that holy mother of lightning in my fascia at dawn, I experienced that familiar pain magnified by a thousand, a 6 or 7 out of 10 on the pain scale, if a 10 is a baby’s head crowning.

I took some ibuprofen. I tried to stretch and move to loosen up. But no, no, no. It hurt too much.

Twenty minutes later, the pills took the edge off enough for me to fall back asleep, but when I awoke again a few hours later, the gnashing heat beast in my shoulder and arm was raging. I took two more ibuprofen, texted Byron that, no, I didn’t need a ride to the doctor or anything but that I wouldn’t be meeting him at yoga over the noon hour.

Fuck me, but this was dumb. Thanks to the ibuprofen, my shoulder felt okay, but I figured I shouldn’t tax it with Downward Dogs and slow eases to the floor. As I went for a run later that afternoon, I tried to riddle out what might have triggered such a bizarre “Hello, this is Jocelyn’s shoulder, and I hate you” episode. Nothing. I had done nothing hard or unusual that might have caused such pain. Naturally, it took about three leaps of thought before I decided maybe I was developing a “frozen shoulder,” and I didn’t even have to visit WebMD for that diagnosis. The same way I often become convinced I have colon cancer the morning after eating beets, I was well able to self-diagnose myself into misplaced hysteria without the aid of technology.

Fortunately, in the happiest story I’d lived since the time my cousin set me up with a tall blonde guy, once the ibuprofen took over, it pretty much solved the problem. The next day and the day after, I had only residual soreness — kind of like I’d been in a car crash, had my head jerked back dramatically, and then felt that trauma bone-deep for a few days afterwards.

By Thursday, yoga actually seemed recommended, as a means of getting the soreness to dissipate. Body perked, “Let’s toss out a few warriors, Jocey, and show that shoulder who’s in charge of the ligaments!

Yoga. was. great. It was the perfect remedy to the stunned soreness that lingered — because yoga does that full-body stuff so many other activities neglect. Fifty minutes on a mat puts the body through its full range of motion, which is the only way to take stock of what’s really going on in there. For me, it was shortly after the teacher made some nominal announcements, did an easy warm-up, and started moving us slowly through Sun Saluation A that my body sent a shouted message: HEY, LADY IN CHARGE OF THE LIGAMENTS, ARE YOU NOTICING HOW EVERY TIME YOU DO CHATURANGA AND EVERY TIME YOU STEP BACK INTO WARRIOR ONE, YOUR EXACT SORE SPOTS LIGHT UP AND CREATE A LINE FROM YOUR NECK, THROUGH YOUR SHOULDER, DOWN YOUR BACK, PAUSING IN THE HIP FLEXOR BEFORE OOMPHING INTO YOUR SCIATICA? DID YOU NOTICE HOW YOUR SHOULDER PAIN IS ACTUALLY LIVING IN YOUR BUTT? HUD, DIDJA?”

Body has a terrible indoor voice, but Body was right. What I had perceived to be localized shoulder pain was, in fact, a long line of connected pain running through the right side of my body. Yet. Each time I moved through another Sun Salutation, each time I stretched and held and focused, some of the soreness released — oozing out of me to the corner where it slid around the floor lamp in a slow-motion ring-around-the-rosy.

This has been the case for the past twelve years, ever since Byron and I started attending yoga classes at the Y together. The kids were finally old enough to tolerate the Kids’ Club sometimes, so we would toss them towards the toys and dash upstairs to sit in a darkened room and slow our breathing. Over the years, I’ve gotten stronger — despite the set-back at one point of, yeah, shoulder surgery — and I’ve gotten better at balance, which is essential to graceful aging, and I’ve learned that all the woo-woo talk about “the breath” isn’t bullshit at all but is some powerful woo-woo ju-ju that has gotten me through root canals without slapping the endodontist like he deserved.

Yoga is alive for me because it changes as I change; it mirrors my life back to me in unexpected ways; it challenges me to challenge myself; it provides me a safe place — that mat the same length as my body — in a mean, mean world.

Along the way, I’ve had five yoga teachers, each of whom has had a different impact (MY DUDES: LOOK AT ME GETTING TO FIVE THINGS IN THIS “FIVE IN FIVE” EXERCISE):

1. There was Julie, with cascading red hair and a silver bell voice, young, newly married, deeply into the Yoga Fit training she’d recently completed. Julie was our first, and Byron and I shared a glorious crush on her. Julie’s class was one of the few spaces just for me during those years when the kids were small and dominated my body as their own. She taught us the “Breath of Fire,” she took time to make us relax our jaw muscles, and her teaching nurtured me into accepting the clear weaknesses in my abilities.

2. After Julie moved away, there was Laura, sister-in-law to a kinda-famous musician guy. Her husband was in the Coast Guard, which usually means “passing through,” but still, her whole being felt rooted. Did I like Laura? I’m not sure. But I respected her knowledge and serious focus in the studio. And one day, when she audibly passed gas while we were doing Wind Release pose, I felt we could be friends.

3. Once Laura’s husband was assigned a new post, we started going to classes offered by Amy, teacher at the charter high school, sister to a renowned snowshoe runner, and yes, I realize it’s a very specific place in the world where snowshoe runners can be renowned. Amy’s classes were hard, and while she tuned into many of her students, I didn’t register with her at all. During this time, I was particularly dumpy and big, just trying to get through days with little kids without crying, and so it felt okay to remain in Amy’s shadows. Eventually, she got pregnant and stopped teaching at the Y. Nowadays, I see her in group fitness classes or running around the track with her now-elementary-school-aged daughter, and I know her exactly while she recognizes me not at all.

4. Then we moved into attending classes with Kristin, a wonderfully trained and detailed master teacher, but someone who intimidated me terribly for a years because I initially perceived her classes as cliquey; all my adolescent demons cackled during Kristin’s classes, jeering that I couldn’t touch the floor in Half Moon Pose, thumbing their warty noses at my lack of the classic “lean” yoga body. But then this thing happened where I just kept going to Kristin’s classes, and I just kept being okay with me, and even when Byron broke his wrist and stepped away from yoga for a few years, I just kept going and getting okayer and okayer with looking at my strong, capable body in front of that mirror, and eventually I realized Kristin had been awesome all along; the problem was me. When I had that shoulder surgery a couple years ago, my physical therapist asked me to articulate some benchmarks that would help us decide when I was “done.” Easily, emphatically, I told him, “When I can start going to yoga class again, I’ll know I’m back.”

About a week before I was ready to try yoga again, I ran into Kristin outside the locker room at the Y — certain she didn’t know me, despite my years in her classes — and, bless, bless, bless her, she stopped and said, “You ARE still around! I thought maybe you were one of those people who disappeared because she got a job somewhere else and had to move.” Nope. Shoulder surgery. And getting back to her classes was a kind of finish line for me. After I filled her in, she smiled and said, “I love having people in class who are recovering from something. They teach me so much.”

5. Alternating with Kristin is a newer teacher, Kerry, a man who was a student in Kristin’s classes alongside me for years. At some point, he disappeared — turns out he’d gone to Sweden to eat candy fish, study yoga, and complete teacher training. Now he’s back, and it was this week as I entered the yoga studio with worry about my zappy shoulder in my head that I was able to experience Kerry as a teacher for the first time. He’s earnest and connected to the people in the room, sometimes miscuing, laughing when he catches himself, and I enjoyed the ease in the room.

In that dim studio with Christmas lights dotting the dusky corners, Kerry, my fifth yoga teacher, is learning teaching at the same time I’m learning to face myself in the mirror without flinching, to tuck my shoulder blades into my back pockets, to come to yoga as I can, to get from it what it gives, to nod as I realize the power of this thing is the slow burn, where I walk into the studio again and again, year after year, my children small to grown, my husband next to me or not, my self-esteem increasingly intact, my aches and pains flaring and fading, the stresses of family and students and money all set aside for that hallowed hour when the only thing I can control, the only thing I have power over, is myself on the mat.