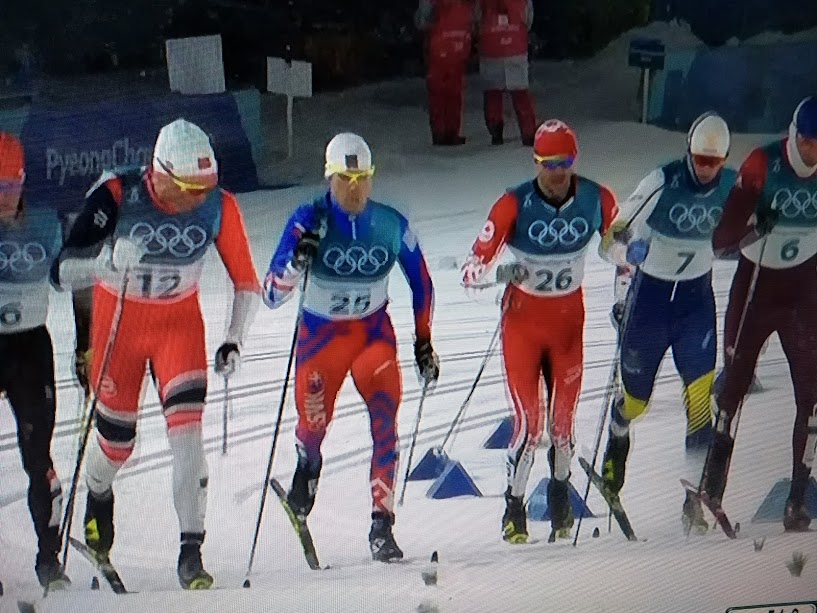 Things that Peeved Me about the Cross-Country Skiing Men’s Classic Sprint Race on the Olympics Last Night:

1. I’ll never be the sprint specialist from Switzerland.

2. There was no outlier competitor from Jamaica with Coke-bottle thick glasses for the world to get sentimental about.

3. No one took the opportunity at the starting line to enact a dramatic pantomime in which he couldn’t break through the flexible bar that blocked his legs, using overstated gestures and mock cry face as he pretended he was — oh, woe! — sthuck at the thtart.

4. The Norwegian skier Johannes Klaebo did his thing he does and literally ran up the hills propelled by an ugly, no-technique motor — when he does this, his skis are incidental to his movement, not a part of any sort of stride or kick or leg extension, and apparently it makes his coaches wince — and here’s the thing: there’s nothing wrong, necessarily, with him running up the hills instead of using actual technique like his competitors; he’s not breaking any rules, and what he does serves him extremely well because — SPOILER ALERT — he won the whole thing masterfully, and passionate (Duluth) commentator Chad Salmela, while pointing out his unique approach up the hills, noted repeatedly that Klaebo is the most-talented men’s Nordic skier in the world, so I definitely am kind of into Johannes Klaebo at the same time I am peeved at him on the hills, and really, if I’m honest, my reaction to him is very personal because there’s this guy in our area who does all these walking races, as in official walking races with prizes and awards and such, and he makes the motions of speed walking so that 99.5% of onlookers think he’s walking, but for those of us in the know, like one certain cranky faded strawberry blonde hammering on this keyboard, we can see that what he does fits the technical definition of running, and I happen to know from the man who taught my Community Ed power walking class a bunch of years ago that this guy is notorious in the race walking community for running and letting people think it’s walking, even after he’s had official judges talk to him about his form and explain how he always has to have one foot on the ground and such, but this cheater guy just shucks off their counsel and enters the next walking race he can find with a prize and no official judges, and sometimes a certain cranky faded strawberry blonde who is hammering on this keyboard has entered those same races, and even though her body is not slim and her pelvis was, according to reports from her mother, out of alignment at birth which may be responsible for her knock-kneed-ness, this cranky lady is really strong and is a very good walker and could, potentially, win a prize with some legitimate walking except for the fact that cheater dude is in the race doing his fake-walk-that’s-actually-a-run, and so he beats her BECAUSE HE’S RUNNING, and boy did it make her feel good one time when her cousin’s wife (a physical therapist) who was watching a race they were both in congratulated her at the finish for being the first female walker (NOT THE FIRST OVERALL WALKER BECAUSE THE AFOREMENTIONED CHEATING PRIZE SNATCHER EDGED HER OUT) and then had to shout, “But he was running! What he was doing wasn’t walking!” — after which the cranky lady hugged her cousin’s wife really hard because at least one person saw that guy for what he was, and this is why I get peeved with Johannes Klaebo because I’ll bet at least one of his competitor’s wives is shouting in Estonia about how he’s running up the hills and not skiing, all of which is to say You go, Klaebo; you look like a four-year-old on roller skates climbing a staircase, but keep it up!

5. In every heat, the frontrunners did that thing near the finish line where, if they had a good lead, they stopped hustling, stopped trying, stopped racing during the race, so that they could cruise across the finish line without effort, all leisurely guy in a smoking jacket looking for his snifter of brandy instead of Olympian hauling relentlessly ass to the very end to get the best possible time. Listen, Cedric, this behavior is unnecessarily cocky. You’re in a race. Finish that fucker out like you’re lucky to be there.