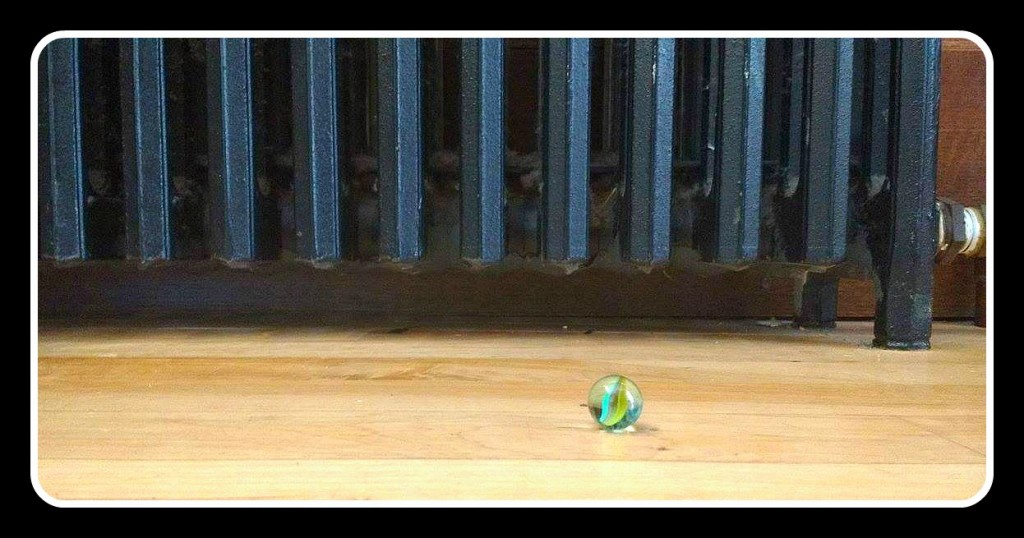 For the past couple of years, every time I’ve swept the kitchen floor–so, like, five times–I’ve dislodged that damn marble from its hiding place under the radiator.

After warming up with gentle strokes around the stove, near the fridge, over by the bathroom, I close in on the radiator. It’s time to get real. Running the broom sideways under the accordion of black pipes, turning a finely tuned ear to the nuanced sounds of crap scraping floor, I predict the detritus that will emerge.

Fttttttttttt. All the lively dust bunnies amalgamating into a single, dull, dead hare.

Busting out first, ahead of the Chex, Belly, hare, and skewer,

Neither kid has played with marbles for, hmmmm, carrying the two and rounding up, six years. We do still have a marble-based toy involving wooden tiers and the deceptive sense of a race, a game that we often pull out when a member of the younger set comes to visit. And, admittedly, the marble in question does have an appealing green glow to it, like an alien eyeball if the alien were from Planet Envy. It’s not too far a stretch to imagine that one time a four-year-old stopped by for an afternoon, and in the hopes of amusing her while her parents sipped peppermint tea, we pulled out the wooden tiers and marbles. During the chatting and marble racing, Paco’s tactile self might have needed to grab and clutch that alien eyeball for a few hours, later rolling it absent-mindedly next to his bowl as he sat at the kitchen counter eating chicken noodle soup, each slurp of broth being imagined into space shuttle food on an important mission to return eyeball DNA to Planet Envy.

Around here, we call that Sunday.

As is the case with all housework, I sigh deeply as I face the magnitude of my neglect. When I vacuum, the floors are again littered with lint, mud, maps of Asia woven out of hair–before I have gotten to all the rooms; by the time I am done vacuuming the entire house, I’m three days overdue for doing the vacuuming, from the looks of things. Behind the idle vacuum cleaner, the laundry glares accusingly at me from its overflowing perch in the basket. Smirking meanly down the hall, the bathroom sink uses spit and toothpaste to spell out “Have a Lick of Mercy. Clean Me.”

By and large, I thrive on the neglect. Every time I don’t clean something, every time I don’t care that the floors crunch under my every footstep, every time I practice my cursive in the dust on the bookshelf, it means something. It means I’ve read a book. It means I went out in the sunshine and turned my face to the sky. It means my hands were busy making a braid in my daughter’s hair. It means I’m lucky enough to be alive in an era where the cleanliness of a woman’s home is in no way tied to her worth.

Eventually, though, I tire of wiping popcorn remnants off the soles of my feet every time I walk to the kitchen to refill my wine glass. I accept that the house has hit a tipping point, that hazy spot between benign neglect and pigsty. Feeling the tip, walking through the haze, I concede that it’s time to wipe, fold, vacuum, or sweep something, lest Child Protective Services find itself making a case against us. Abuse through mold is a thing, right?

Not at all sane, my reaction has required significantly more energy and yielded a Groundhog Day-like scenario, wherein the marble will assuredly be back under the radiator before I sweep again.

What I do is this: I wait until I feel Martha Stewart groaning all the way from Maine because her radar has detected my kitchen. When I hear her groans, I take out the broom and sweep. When I get to the radiator and start pushing the accumulated trash heap out into the light, I find myself frozen with wonder. Look at all that. Would you look at all that? As I stand, transfixed, marveling at the pyramid of cereal, rubberbands, Lego parts, and granola bar wrappers, the marble bolts.

Because I am strong like bull, my sweeping has vigor. Marble has momentum. Making a break for the dining room, the thing whizzes towards the sideboard, sensing somehow that a whole new tribe awaits, if only it can get to the nearest low-lying structure. Playing cat to the marble’s mouse, I slap at it with my broom, trapping it in the bristles.

Let us not speak of the gunk that lives in the bristles.

Bravely, I reach into the bristles and extract the damn marble. Standing, again transfixed because marbles are hypnotic, I am caught by its glowing beauty. Hell if the little orb isn’t clearly an alien’s eyeball. Maybe the alien lost it in a sword fight with a pirate because aliens are all about lasers and telekinesis, not swords, and maybe the pirate picked up the alien’s eyeball after he poked it out with a sword but then, because he had a peg-leg (gangrene set in post shipwreck), his balance was off, and so the pirate felt himself toppling off the high mast where he and the alien had been fighting. Not wanting the alien eyeball to become a sunken treasure, the pirate tossed it over his shoulder while yelling “I always loved ye, Mama!” before his words were drowned out by the sound of a large splash and the Jaws theme. Fortuitously, the alien eye hit the deck of the ship, which was actually my house, whereupon–choppy seas–it promptly rolled under the radiator. This is probably exactly what happened.

I have to make sure Paco gets this amazing marble back in his softie paws. Thoughtfully, because if he ever falls overboard, I desperately want Paco’s final words to be “I always loved ye, Mama!”, I place the glowing green marble onto the kitchen counter, in front of his eating stool, where he will find it when next he makes a soup-slurping pit stop.

When he does, the marble holds his interest for a few seconds before his fingers move on to the clay figures, the books, the earbuds, the molding compound, the chopsticks, the pencils, the paper notes–all the things that constitute Paco State Park. Forgotten, the marble rolls away, dejected, tossing itself to the floor, seeking shelter under the radiator.

And there it lives, a blip on no one’s radar except Martha Stewart’s, until I sweep again.

Last week, it was time. I heard Martha’s groaning. I got the broom out.

When the marble moment came–it never fails yet always surprises–I was not. in. the. mood.

Lacking the energy to grab the marble and march to the basement to put it into a box, I simply held it in my hand for a minute before declaring, “No more, Marble. I just can’t with this. You have to go.”

Easily, happily even, I walked to the trash and tossed that damn thing into the bin.

A week later, as the kitchen floor became overwhelmed with rice and grit from the ice outside and toast crumbs, I heard Martha groaning, all the way from Maine. All right. ALL RIGHT.

I got the broom out.

Warmed up with gentle strokes around the stove, near the fridge, over by the bathroom.

Closed in on the radiator.

Before I ran the broom sideways under the accordion of black pipes, I hesitated, found myself in the grips of an emotion.

I was a little sad.

Sighing deeply, as is not only my way when I’m doing housework and facing the magnitude of my neglect

but which is also my way when I’m regretting a hasty action,

I lectured myself. Be a grown-up. Finish your task, woman, so you can go read a book or turn your face to the sky.

Pushing back against child-like melancholy, I tucked the broom under the black pipes and gave a swipe.

Bursting from beneath the pipes, making a break for the dining room, it was a marble.

Like the eye of a heroine living on a dusty planet, an orphan eking out a life for herself by collecting and selling scrap metal.

Watching it disappear beneath the sideboard, I tucked the broom into my elbow–my hands needed to break into delighted clapping, my body needed to bounce with elation, my lungs needed to bark with joyful surprise.

Smiling hugely, I leaned the broom against the counter (it promptly fell to the floor with a satisfying smack), dropped to my belly, and reached my arm under the sideboard.

There. Gotcha, you little fink.

Cradling the hazel eye in my hand, I walked to the radiator in the kitchen, bent down, and gently rolled the thing back into its home.

See you next week.

4 responses to “Found My Marbles”