Nicki Hilton got married a few months ago to James Rothschild at Kensington Palace.

Bewilderingly, my invitation went missing in the mail. The USPS, she flounders.

It’s a shame my invite never plopped through the slot onto our front porch. Unquestionably, I would’ve gone.

And if I’d attended, not only would I have kept a strict eye on Paris during the reception (champagne + Paris = public boobs), I’d have been a hero of the day when Nicki’s cathedral veil got caught under the tire of a Bentley (Kanye’s) while en route to the ceremony. 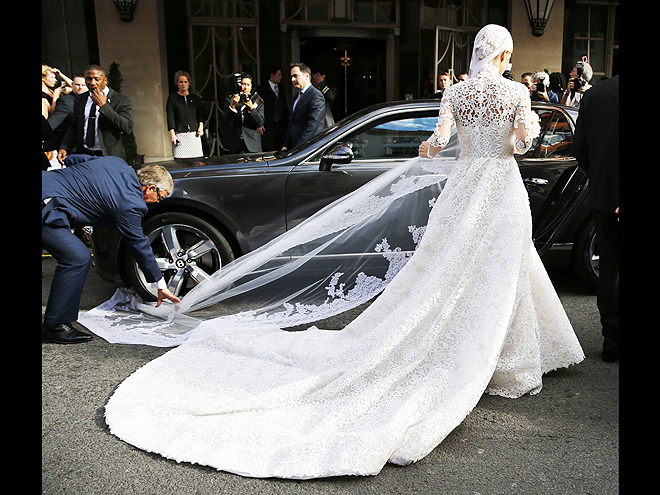 Seeing the lace trapped under the tire, I’d have sprung into action, lifting the car with one hand while freeing the fabric with the other. With my third hand, I’d have waved at the paparazzi. Helpful life advice: always toss a saucy wave to the paps.

Freeing Nicki’s veil would have compensated for my near miss the day Isadora Duncan died.

I don’t like to talk about it–too soon–so let me leave the story here: sometimes I still have silk-scarf-rear-axle nightmares after which I jerk awake, only to discover I’m wearing my husband’s underwear around my neck. Wildly, I grope around the bed, trying to get my bearings, and before you know it, I’m clutching a handful of his fully exposed rear axle.

There are worse endings to a nightmare.

At any rate, had I been there, I would have been highly motivated to save Nicki’s veil from further molestation under that Bentley.

If only my invitation had been delivered.

To be honest, I’m starting to doubt the Hilton family’s affection. Things got really muddy between us in 2013 when Paris and Nicki’s younger brother Barron bad-mouthed former Parent Trap uber-star Lindsay Lohan, after which Lohan purportedly ordered an attack on Barron. Sweet seeping pores, but his face was bloodied. By thugs. Which I know nothing about. No matter what Paris said on Instagram. I couldn’t have been part of Barron’s beating. I was shoe shopping with Cher that night (nothing like new thigh-high boots to turn back time!!).

Given The Hiltons’ checkered history with The Jocelyn, I shouldn’t have been surprised a few months ago when I applied to become a blogger for the family’s hotels–yet, in response, received only the deafening sound of crickets sawing their legs together.

I wanted to be a Hilton blogger. The compensation would have been 15 days of free accommodations at Hilton Resorts. And I think we all know how I feel about a hotel because cable because someone else washes the towels because key card because ice machines!!!

When I wrote responses to the questions presented on the application, I truly tried. I stayed within the strict word limits. I attempted to convey an original voice while taming the loony. I played up Travels with Children. I aimed for adultish.

Yet: insect legs sawing together.

So. The Hiltons have rejected me despite my near rescue of Nicki’s veil.

The great thing about having a personal blog is that I can go ahead and like myself even when no one else does. I can share my little travel stories in this space, and screw them Hiltons, especially Barron and his Lohan-bashing mouth.

Here, then, is everything the Hiltons don’t want (I mean, in addition to my presence at Nicki’s wedding. Which is why Paris’ boobs ended up in the punch bowl. The rest of her was still attached to them.):

A few years ago, our family vacationed in Çirali, on Turkey’s Mediterranean coast. Çirali is a remote village that has family-owned businesses lining a single long road. Other than that, there is only the sea. Every morning, we enjoyed breakfast in the pension’s courtyard while watching chickens cluck around beneath the quince trees. After finishing our tea, the four of us would meander to the beach. During the next few hours, we’d cover our legs in sand, play games in the water, and enjoy complete peace. For lunch, we’d wander down the road and find seats at our favorite restaurant; there, a teenage son would take our order while his mother cooked in the back. Fueled by gözleme (stuffed pancake), we would head back to the beach for more swimming, reading, and lounging. As the sun started to dip, we made our way into the ruins of an ancient Greek city, Olympos. One night, we had an after-dark adventure and hiked to see the Chimera; vents in the hillside allow small fires to pop up and then disappear–the stuff of legend! Ultimately, our family agreed: Çirali was the most relaxing, fascinating place we’d ever visited.

Most fundamentally, we travel with our children because we want them to learn that material things come and go, but experiences belong to them forever. With every trip, our kids are exposed to culture, diversity, and history. From these exposures, they have learned appreciation of differences, rather than judgment. Travel has taught them to say “yes” to opportunities; they are willing to try new foods, hop on trams, or climb myriad staircases to the top of monuments. In addition, they understand the power a person has when in command of a language; at the same time, they know that amazing amounts of communication can take place without a common language. Yet another benefit of travel is that the long hours of waiting—at airports, for shuttles, for the next tour—help kids develop patience and coping. Ours know how to pull out books, play games, and people watch until the call of “It’s time. Let’s go!” Finally, they learn resiliency. I was never more proud of my daughter than when she was six and, nauseous from a winding road in Guatemala, vomited in the van. As she wiped her face, she asked, “When we get there, will there be monkeys?”

When traveling, I try to release expectations and be flexible, open to whatever each day offers. If I have rigid notions of how things should be, then I will be frustrated, stressed, and disappointed when reality hits. Because I am also a dedicated traveler who wants to make the hours count, I sometimes have to be deliberate about conceding, “Okay, so this is how it is.” For example, when my kids were eight and ten, we were in Florence, Italy, having set the afternoon aside to explore the renowned Uffizi art gallery. When we got there, they were completely uninterested in looking at a single thing. In particular, my son announced he was done with museums and didn’t want to walk through any of the rooms, not a single one, nope, none at all. This attitude could have ruined the day. However, I looked at it from his point of view and understood. We had gone to many museums. He’d done his time. So long as he would wait on a bench while we explored, that was fine. Thus, my main memory of the Uffizi (and it makes me laugh) is of my children sitting slumped on a bench.

Tell us about a time when something unexpected happened on your family vacation.

One summer, we took a road trip across the American West. At a campground in Casper, Wyoming, the romance of camping was quickly squashed when my husband was brushing his teeth near the fire pit, and a moth flew into his ear. Quickly, the moth worked its way deep into the ear canal; my husband could hear it fluttering inside his skull. First, we tried pouring some water into the ear, but all that gave him was a sloshy head. Then we tried pouring in some olive oil, hoping to convince the moth that there were better homes to be had elsewhere. No luck. Eventually, we shrugged, decided the moth had to sort itself out, and went on with our day. We drove to Thermopolis and took the kids to the dinosaur museum, but by late afternoon, the moth—still fluttering—was causing my husband pain. He ended up going to the clinic where an unflappable doctor inserted a long, thin tweezer into his ear, extracted the agitated moth, and plopped it into a jar while saying, “Happens all the time around here. Nice souvenir for you.” That night we opted to stay in a hotel.

Give us the best travel tips for a family like yours.

So those are the responses that left the Hiltons unimpressed. For a long time, I wasn’t sure what they’d been looking for that I didn’t have.

But then I clicked over to look at their roster of bloggers.

A bunch of them are named Amy.