After visiting the Great Sand Dunes, we continued to drive through Colorado, towards Wyoming. Before we could really gun the car and head north, however, we needed to pull over for gas. And Jocelyn might have needed a bag of beef jerky. As is her way.

As soon as we turned off the engine, we glanced out the window–and saw this: 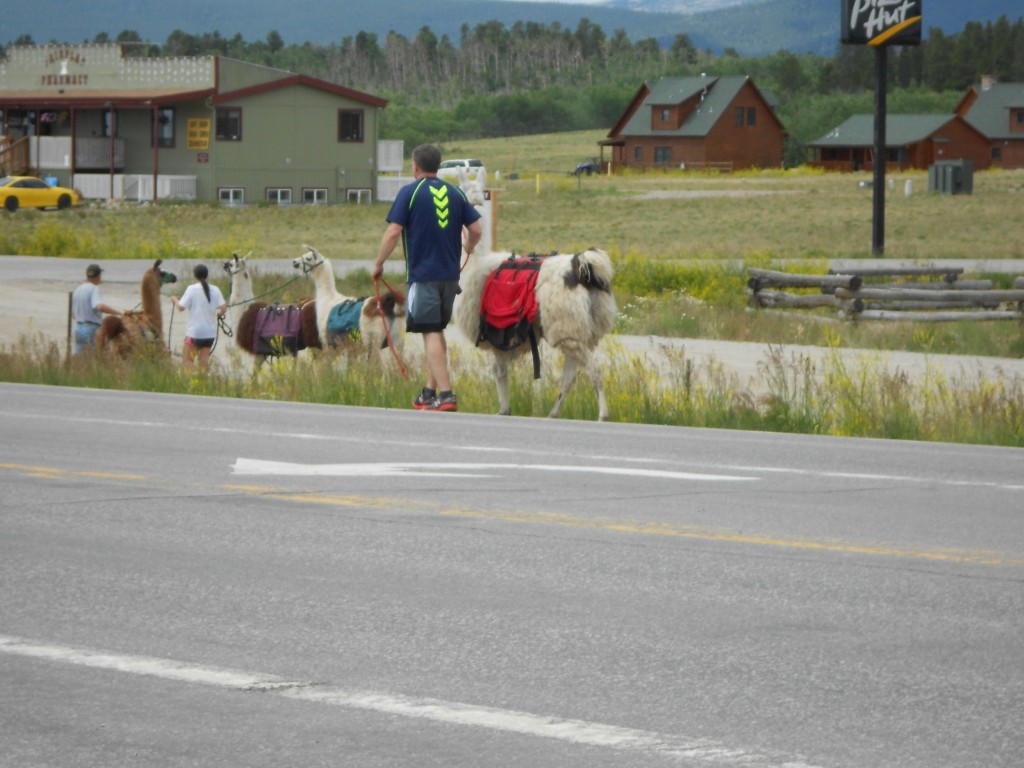 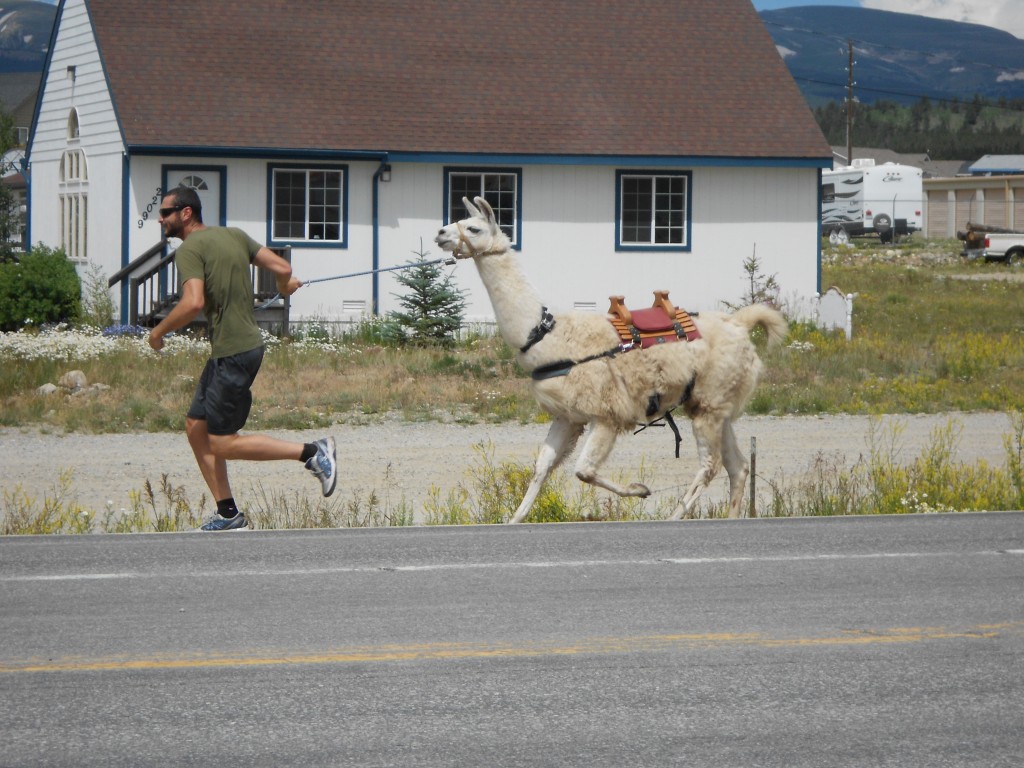 Plus, a bunch of other runners dragging llamas went by. Part of me wanted to shrug and act nonchalant, like this was the stuff of every Saturday. Most of me wanted to shout “What in the holy mother of pack animals is going on here?”

Turns out it was “Burro Days.” Which apparently means “Llama Races.” Of course.

Well fueled by fossils and jerky, we continued to drive. Getting around Denver took insanely long. My overriding impression of the population centers of Colorado, both from living there and from traveling through, is that there are too many people, and all those people are driving cars around, and it is just frustrating and blech. I just don’t want to spend that much of my life sitting in a car, watching the same light turn from red to green to yellow to red to green to yellow to red to you get it.

Providing the perfect counterpoint to the traffic of Colorado is the wide openness that is Wyoming. As we neared our destination for the evening, Guernsey State Park, the terrain began to look more and more like Home to this Montana girl.

Dear The West: You can give me all the browns and beiges and taupes in the spectrum, and I’ll find them dazzling. 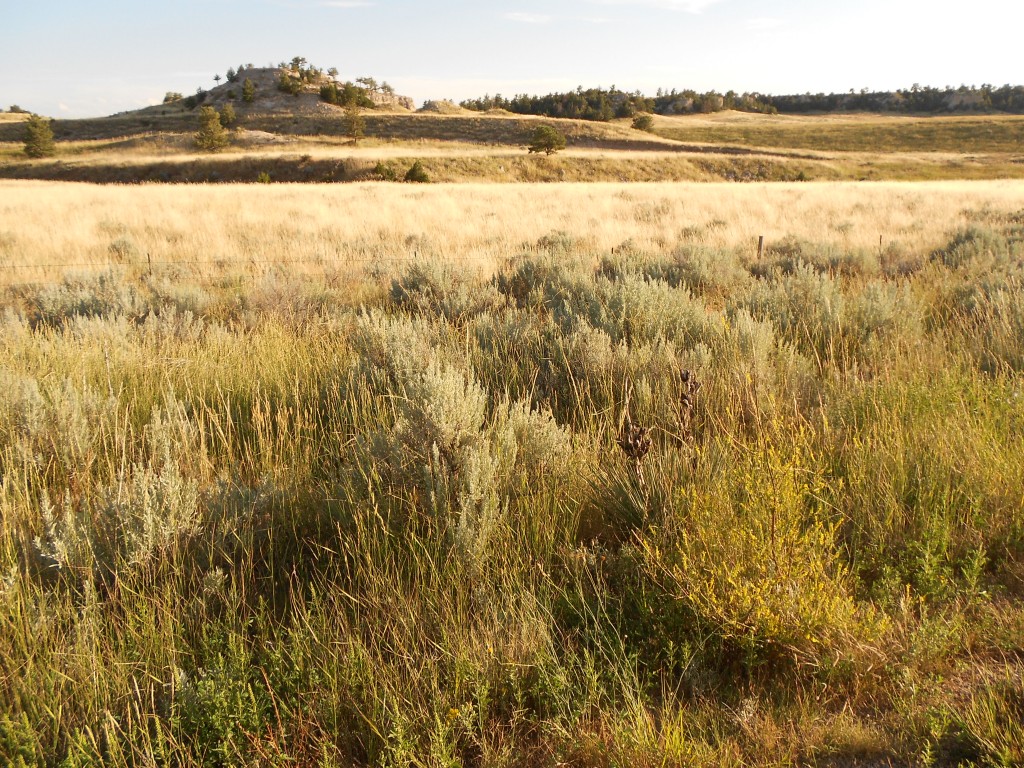 Dear The West Some More: You can also keep painting the sky with pastels every night. 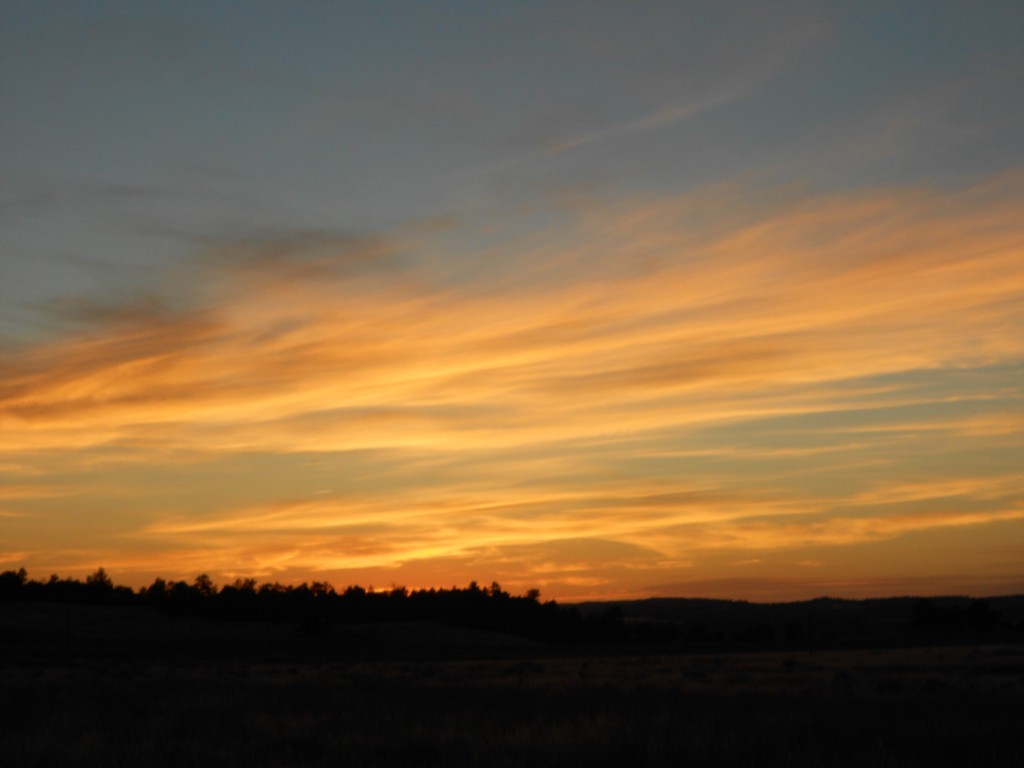 Because we were doomed on this trip to have terrible nights’ sleep in campgrounds, the lovely Guernsey tent site offered up eleventy kajillion bugs, rampant cow manure smell, and coal trains running along nearby tracks from, um, Sleep O’Clock to Wake A.M.

Fortunately, our tired selves were restored the next day in South Dakota–a state with plenty of its own natural beauty but which, inexplicably, has tried to up its appeal by schlockifying every possible pull-over. 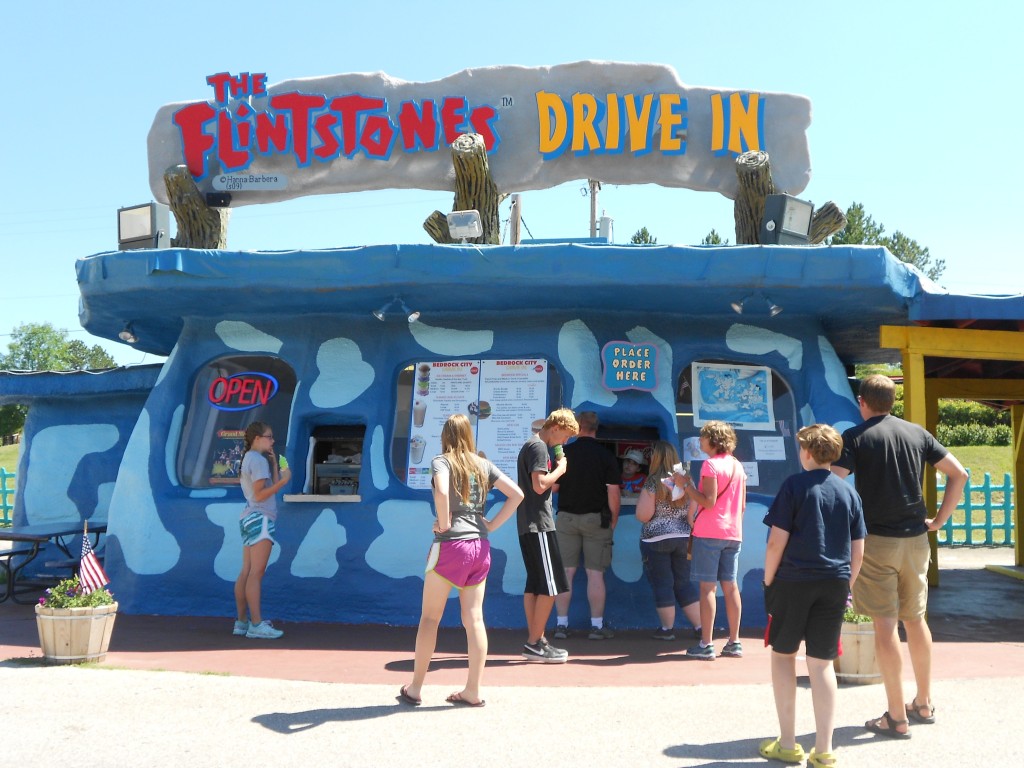 Fortunately, as much as I thrill to a beautiful landscape, I also lurves me some schlock.

And twist cone soft serve featuring half vanilla ice cream and half lemon-lime sherbert. You know, as ice cream occurs in nature. 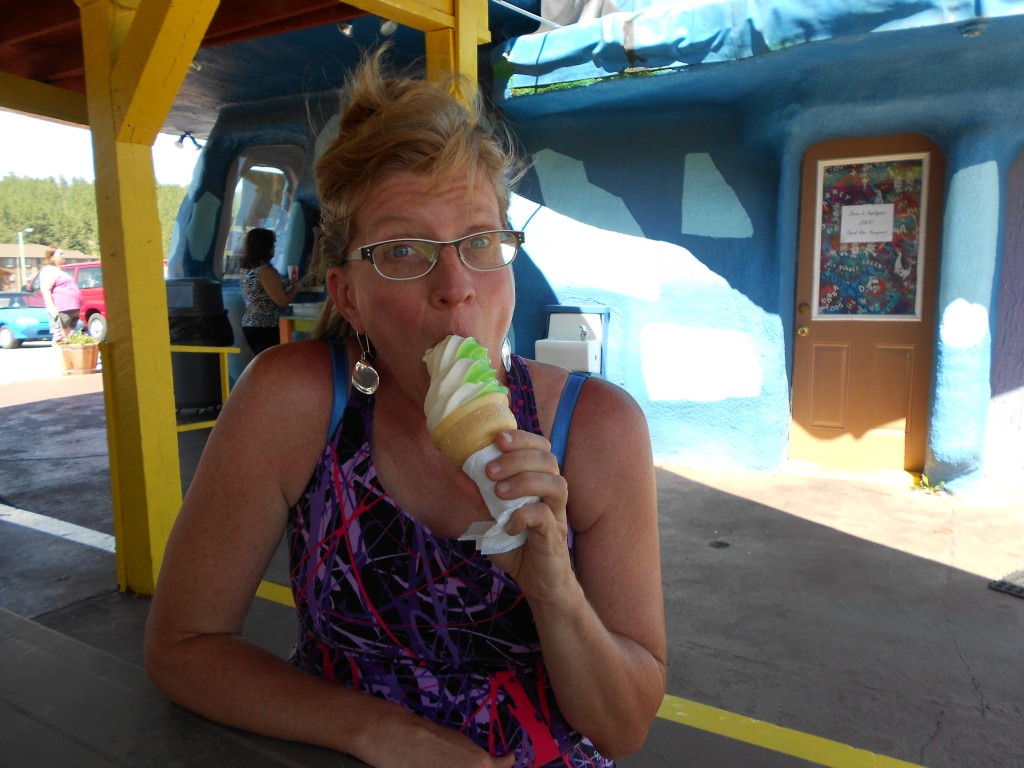 We needed a sugar infusion so that we could be at the top of our energies whilst viewing a major American attraction. See it, off in the distance? 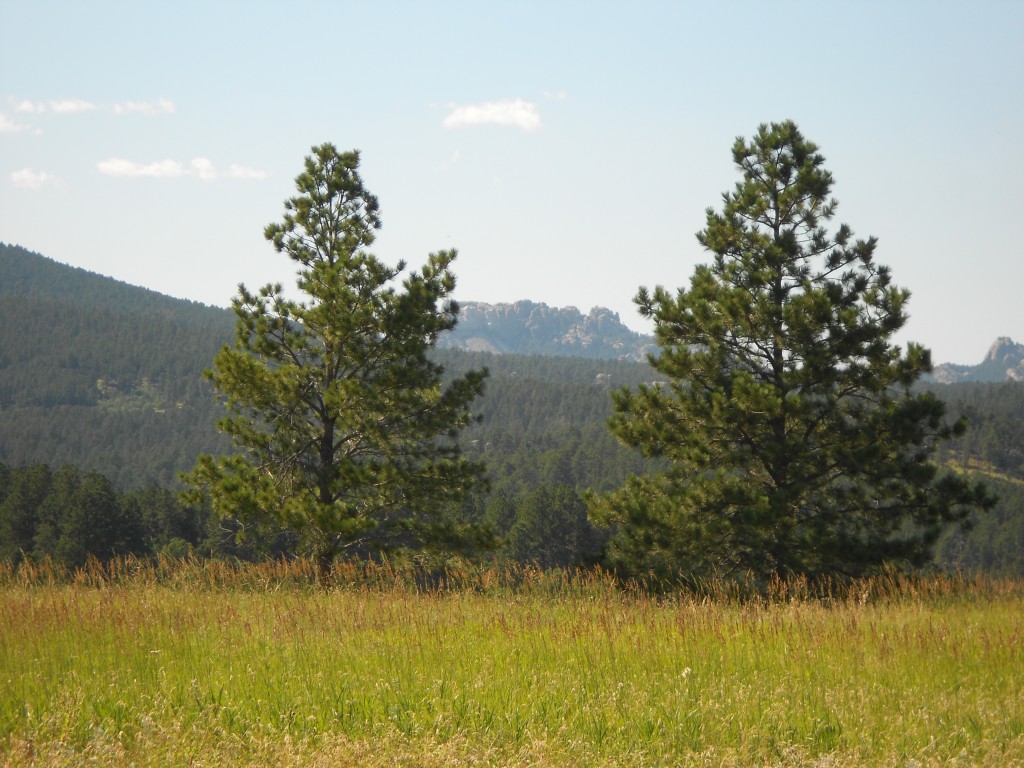 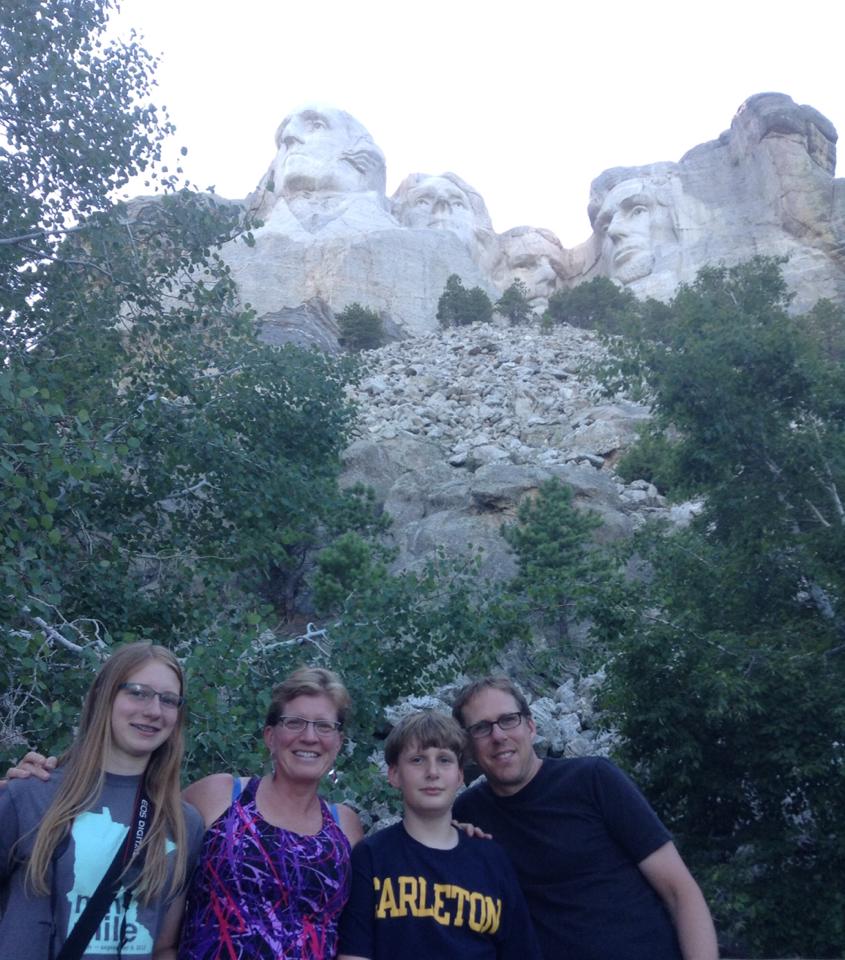 I’ve seen Mt. Rushmore at least a handful of times, if not more, and every time it’s moving and majestic, and I’m not one to get soppy over presidents, except for the first time I saw Barack Obama on Jay Leno, way back before the presidency was on his radar. Watching Obama work the interview, I turned to Byron and said, “I would date that man. You are invited to come along.”

After a night’s rest in a real room with real walls, our whirl across South Dakota continued to fluctuate from fake crap to majesty and back to fake crap again. That is to say, we stopped at the legendary Wall Drug. While I’ve probably been there at least fifteen times, the kids didn’t remember our last time through, as they were too young. Paco was very excited to try Wall Drug’s famed “free ice water”; gulping down his first swallow, he clutched at his throat and cast about for a place to spit dramatically while yelling, “YUCK. That water is terrible! There is no water like Lake Superior water!”

The only way I could calm him down was to pose him and his new l’il-cutie-fluffy stuffed bison in front of its inspiration. 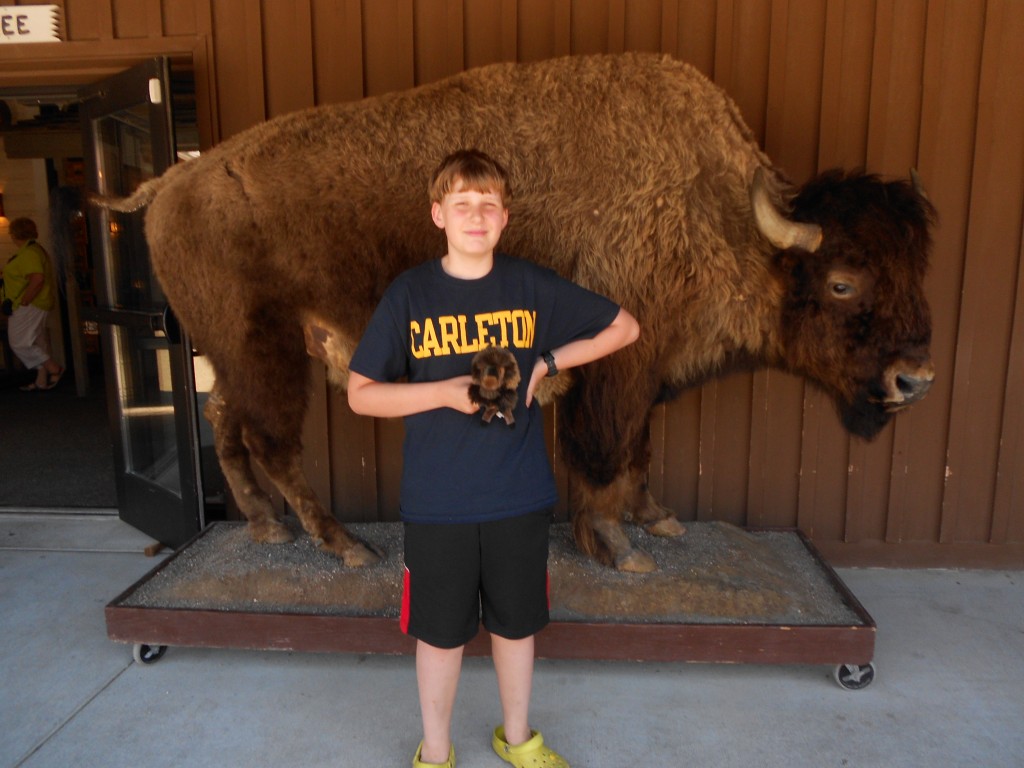 In the meantime, Allegra had found a girlfriend. She’s a quiet girl, our Allegra, but I got the sense these two could sit side by side on the porch for decades, exchanging only the occasional, “You cold? You need sleeves yet?” 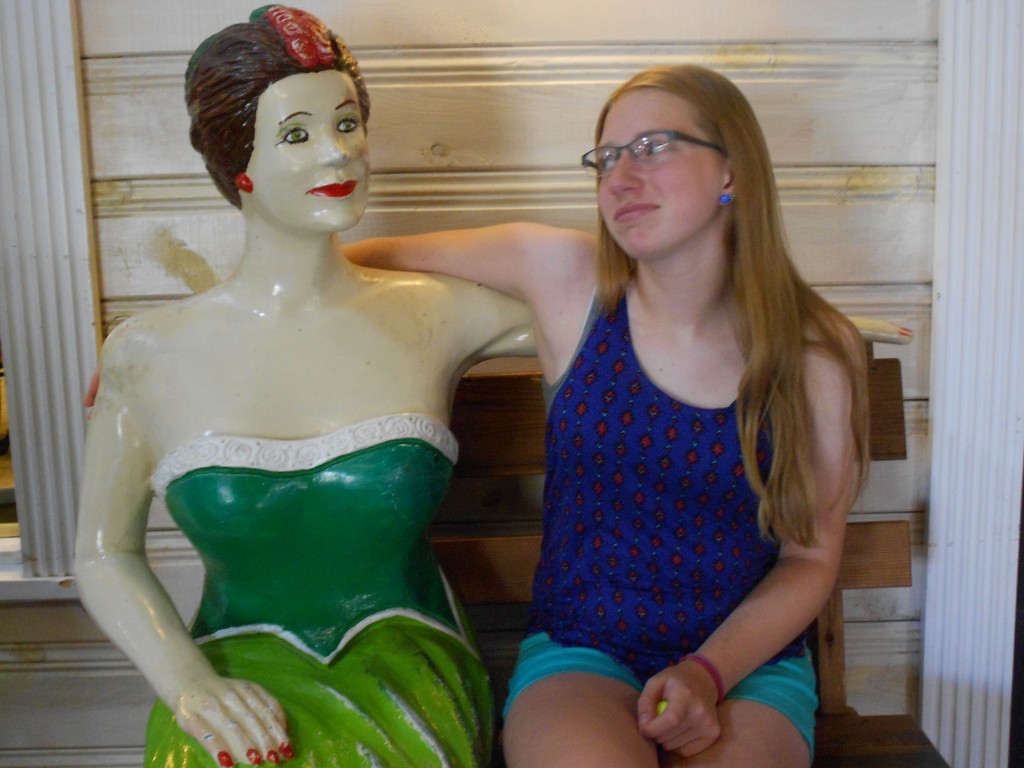 After bolting from Wall Drug, we headed into the Badlands, a place where one can stare at the earth and think about them fancy striated Fourth of July Jell-O dishes that Aunt Mabel likes to bring to the family gathering. 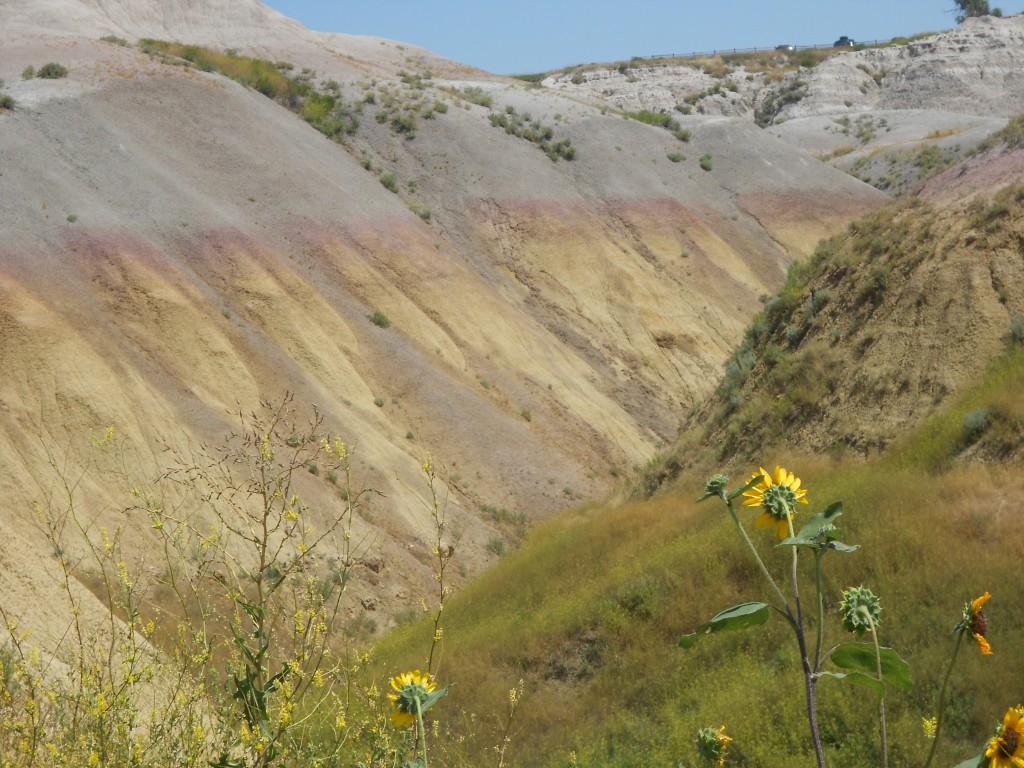 We pulled over multiple times in the Badlands; after about the first five stops, the kids lost interest and energy for getting out of the car and staring at beautiful erosions. By the end, we were hard pressed to peel them out of the back seat, away from their books (Allegra ended up reading almost ten books on the trip).

There are worse problems to have. 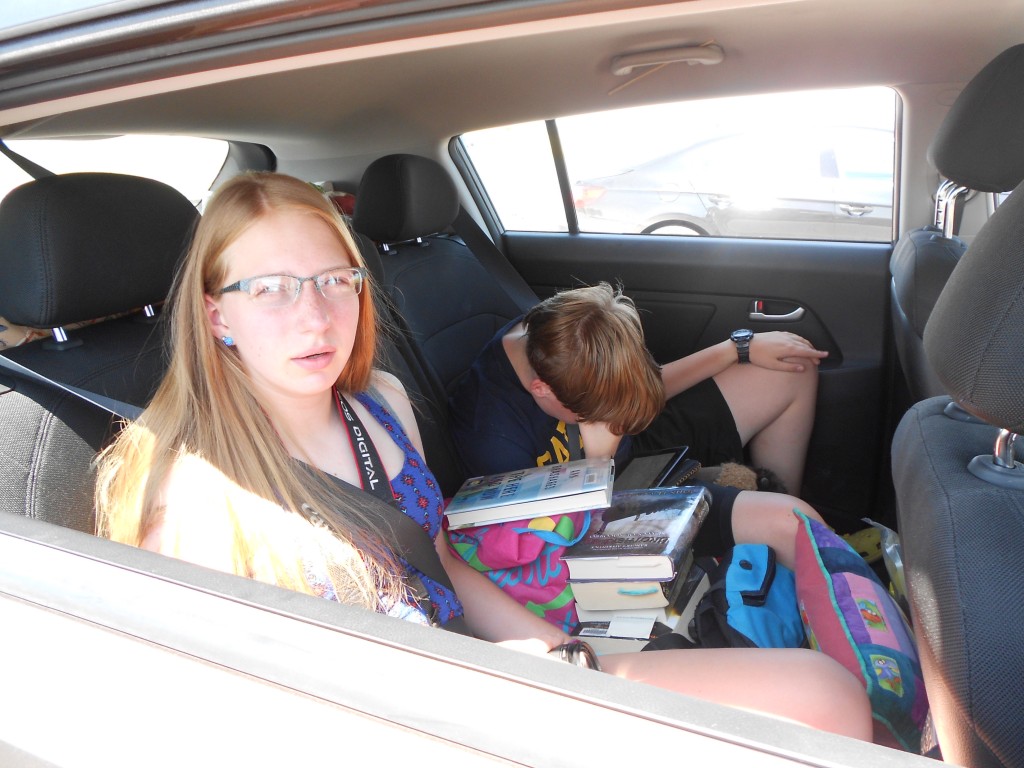 So those of us with the will got out of the car repeatedly and applied our best oooohs and ahhhhs to the landscape. 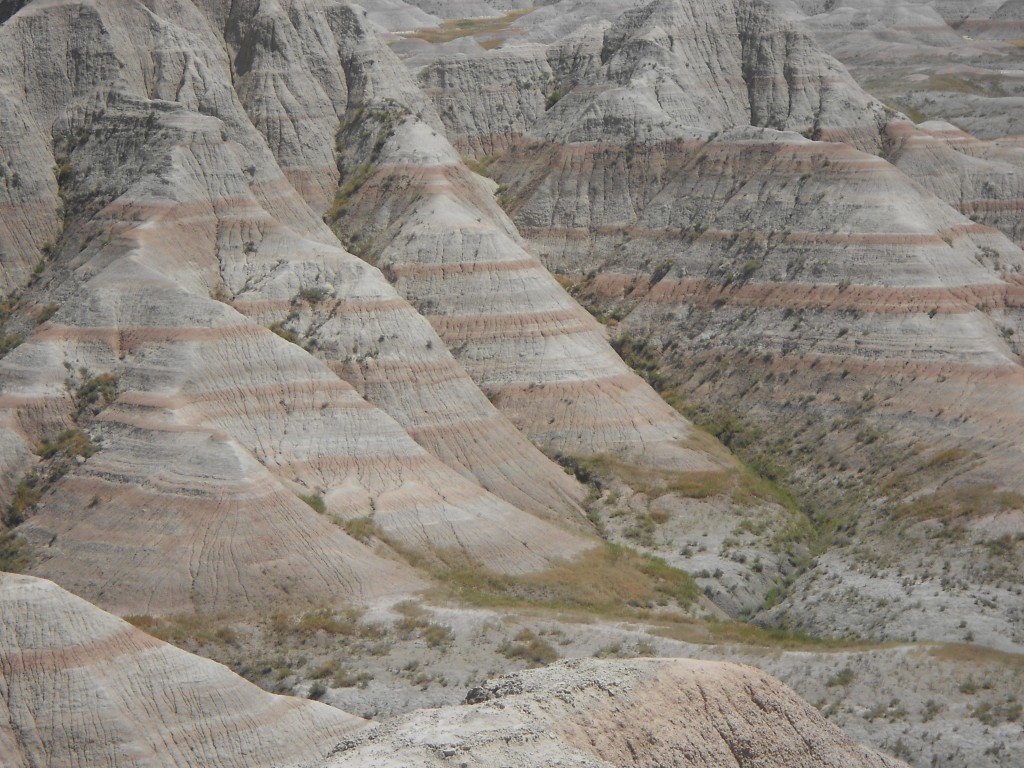 After exiting the Badlands, we pulled over at a sod house that has been restored. I really wanted our family to stop here because my grandma Dorothy was born in a sod house on the family ranch in Montana. When I was in junior high, I had an assignment in biology to collect as many wildflower specimens as possible and compile them into a labeled collection. One Sunday afternoon, we walked around the ranch with Grandma, picking wildflowers. She saw flowers I didn’t even know how to notice, and she knew the lay person’s name for almost every one of them. At one point, casually, she gestured across an open expanse at a caved-in-looking hill and said, “That’s the sod house where I was born.”

So, yea, I wanted the kids to get a feel for their great-grandmother’s beginnings. Plus, I always like a chance to bring history to life. 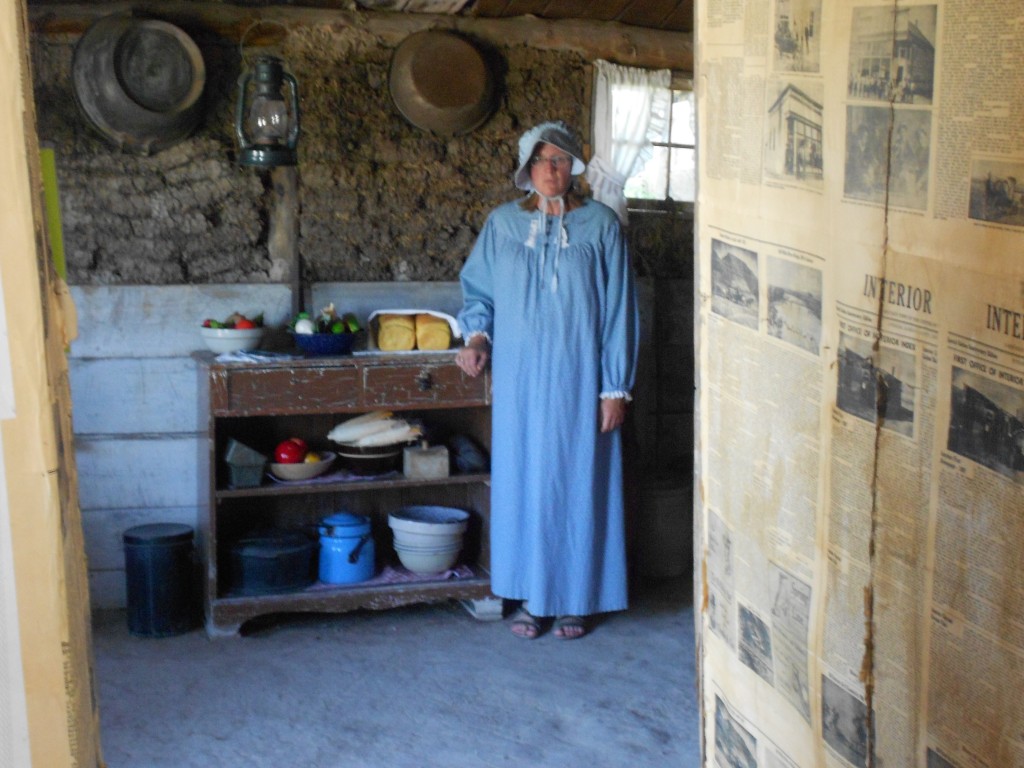 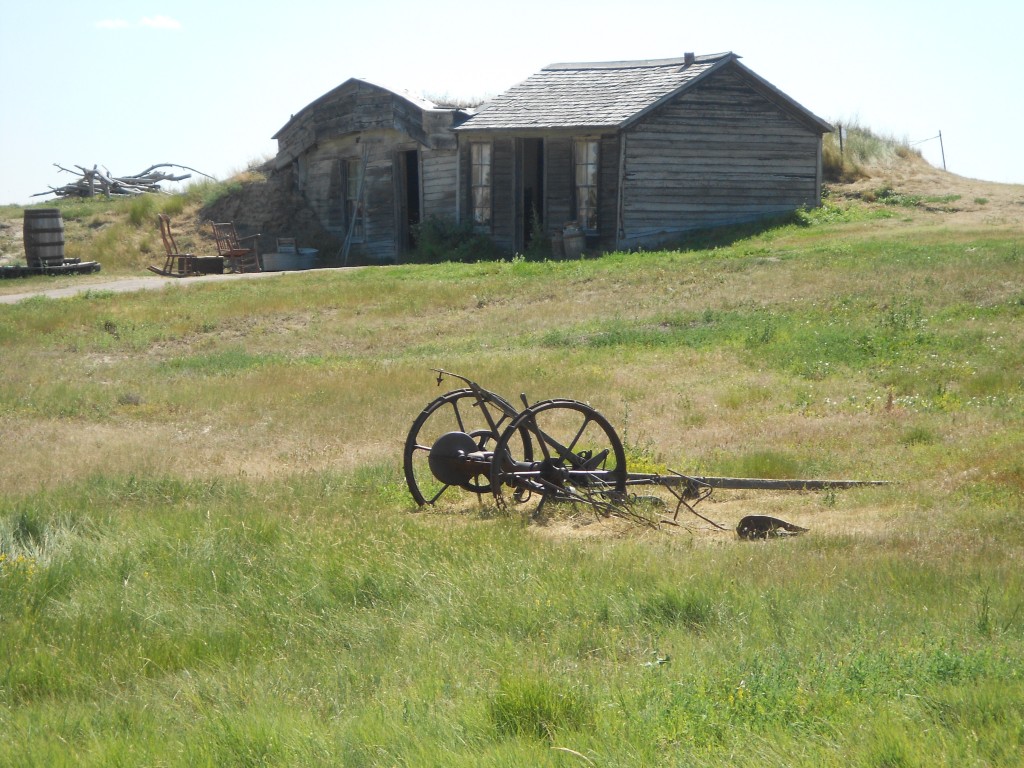 On our last evening of the road trip, before our last long day of driving, we stopped in Mitchell, South Dakota, to meet up with my aunt Geri and uncle Gale. It was fitting that we stopped at Culver’s on the last night of our trip since we had spent the first evening of our trip (in Austin, MN) having Culver’s with a loved one as well. Thanks to Culver’s and its amazing frozen custard, we were given the sense of coming full circle. 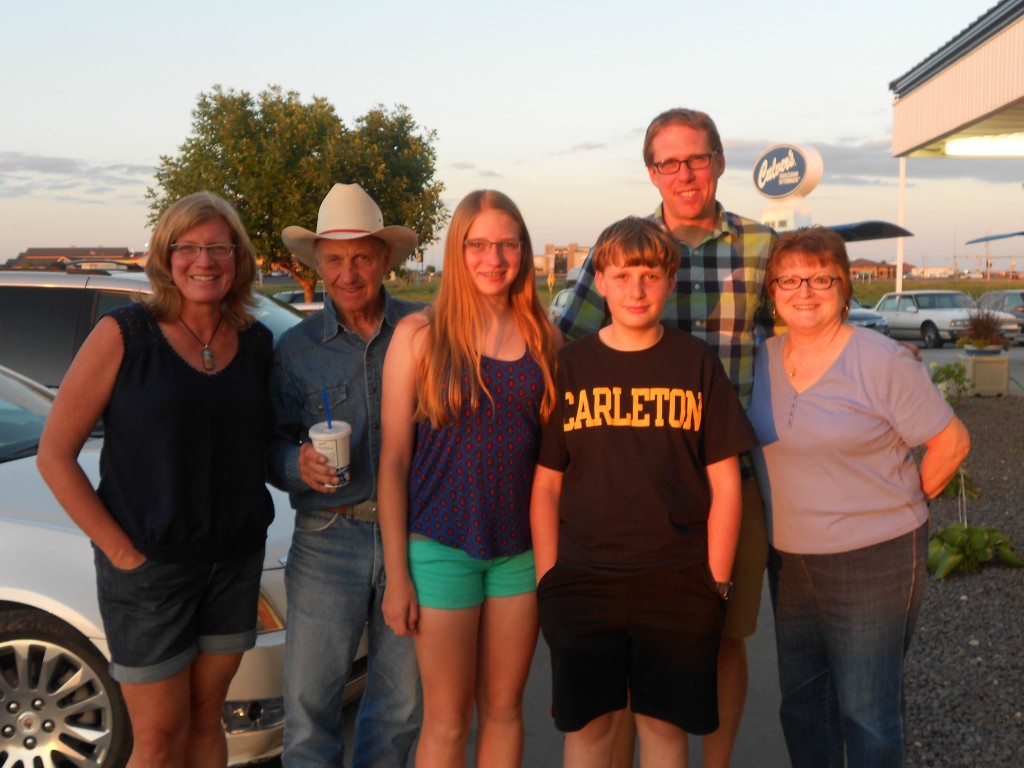 After a night’s sleep in Sioux Falls, we pushed our way to Duluth the following day. One of my favorite moments of any trip away is when we pull up to our house and crack open the doors of the car, for the smells of pine and water are distinct markers that we are Home.

A few days after our return home, Byron finally finished the blackwork embroidery (his first) that he’d been experimenting with throughout our journey. 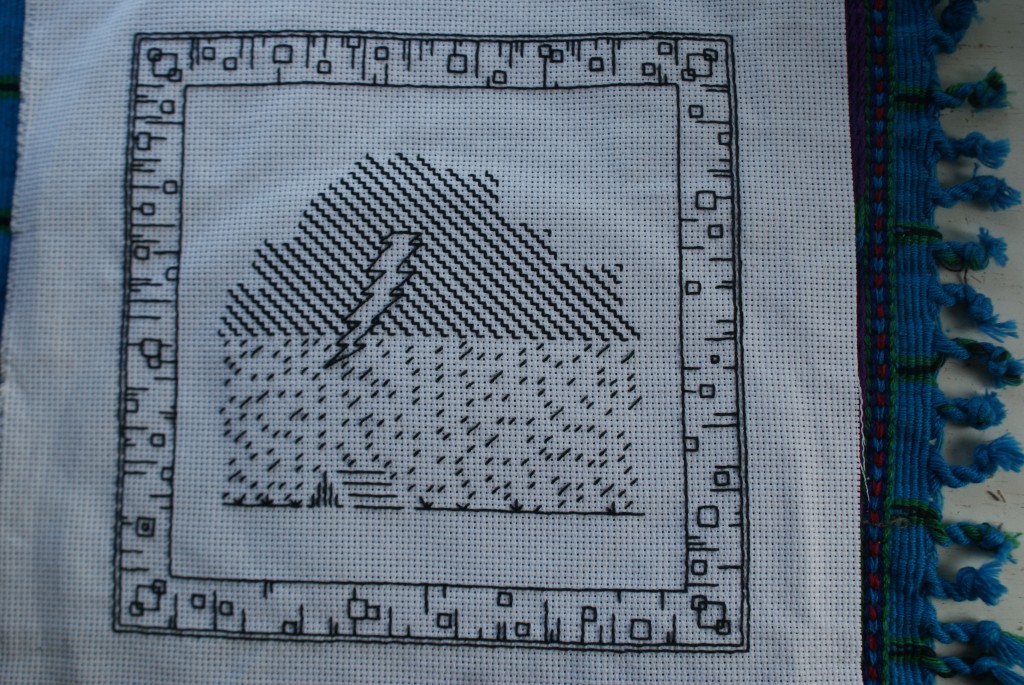 He’d stitched a picture of the second night of our trip, when we’d camped in Nebraska. Plagued by a fearful thunderstorm, we’d all huddled in the blacked-out campground bathrooms for a couple of hours in the middle of the night. Look at our little tent there, getting battered by the elements!

Ultimately, our weeks on the road confirmed what my heart already knew:

If I have to huddle anywhere for an extended period of time,

my husband, son, and daughter are the people I want to be leaning against in the darkness.

11 responses to “Scrapbookin’ the Road Trip: Page the Final”