By Day 6 of our road trip, we were ensconced in my brother’s two-bedroom apartment, our home for the next week. My brother, Geoff, was exceedingly gracious and made us feel relaxed and at home. In other words, he handed us locally made beers and showed us how to use the remote control so that we could watch Property Brothers. Additionally, he had taken a few days off of work so that we could do some exploring together, and he had arranged with his wife (they are separated) to have their younger daughter, the one with free summertime hours (the older daughter, Cres, works as a lifeguard), to stay at his place during our visit.

Our first day trip all together was to Bandelier National Monument. Even though Geoff lived in Albuquerque some years back and now has been living there for the last year, he had never visited Bandelier. His interest, coupled with the fact that our dentist in Duluth recommended the place heartily as she probed my gums with a sharp instrument, made it a must-see. A bonus was that Cres had the day off from work and was able to accompany our meandering group.

Here’s how the Wikipoodle summarizes Bandelier:

“Bandelier National Monument is a 33,677-acre (13,629 ha) United States National Monument in New Mexico preserving the homes and territory of the Ancestral Pueblo People. Most of the pueblo structures date to two eras, in total from 1150 to 1600 CE.”

The subtext to this description is that Bandelier is a place of: 1) ancient homes accessed by ladders; 2) dust; 3) heat; 4) prickly plants. Thank you, Bandelier, for bringing together four of my favorite things all in one place! 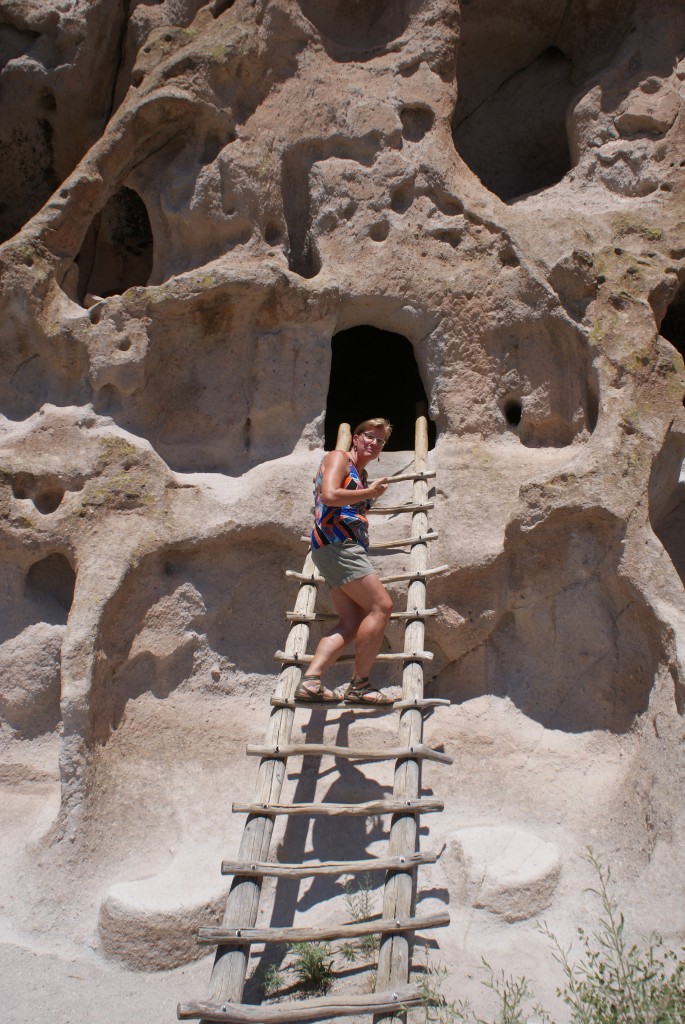 This business of climbing ladders all day? Seriously hard work. That’s why I’m going to enjoy revisiting these photos when I’m 80-something: so I can marvel at what I once was able to do. 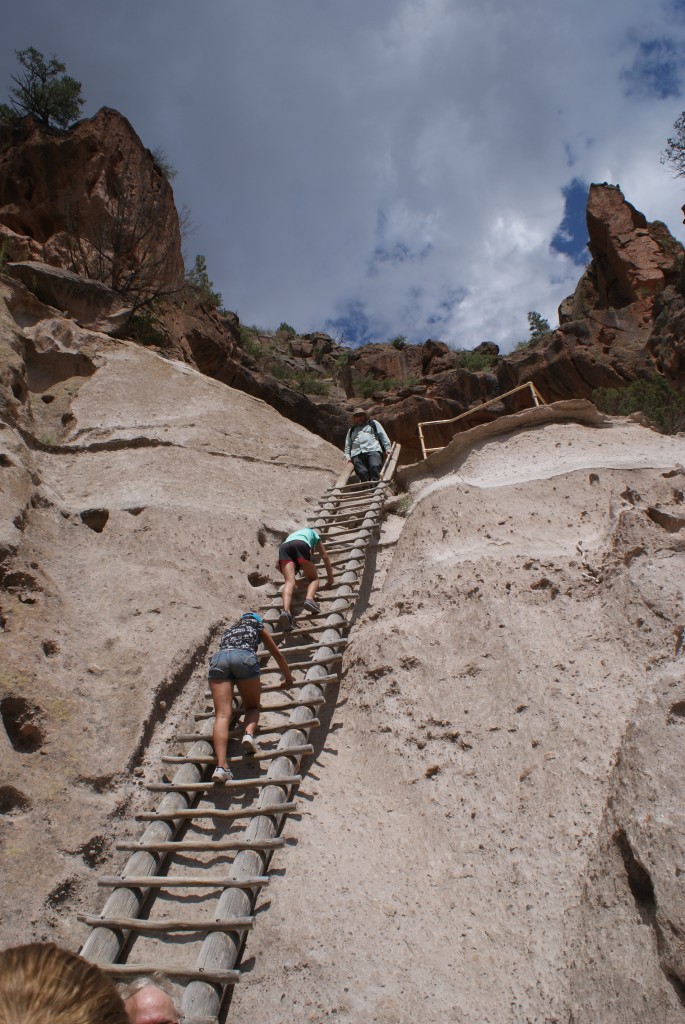 Even more interestingly, my niece, Cres (age 16), was giving herself exactly the same pep talks.

Between that commonality and the hours of chit-chatting we had as we wandered around the place, I felt like she and I would’ve been happy friends, even in Ye Old Pueblo Tymes. 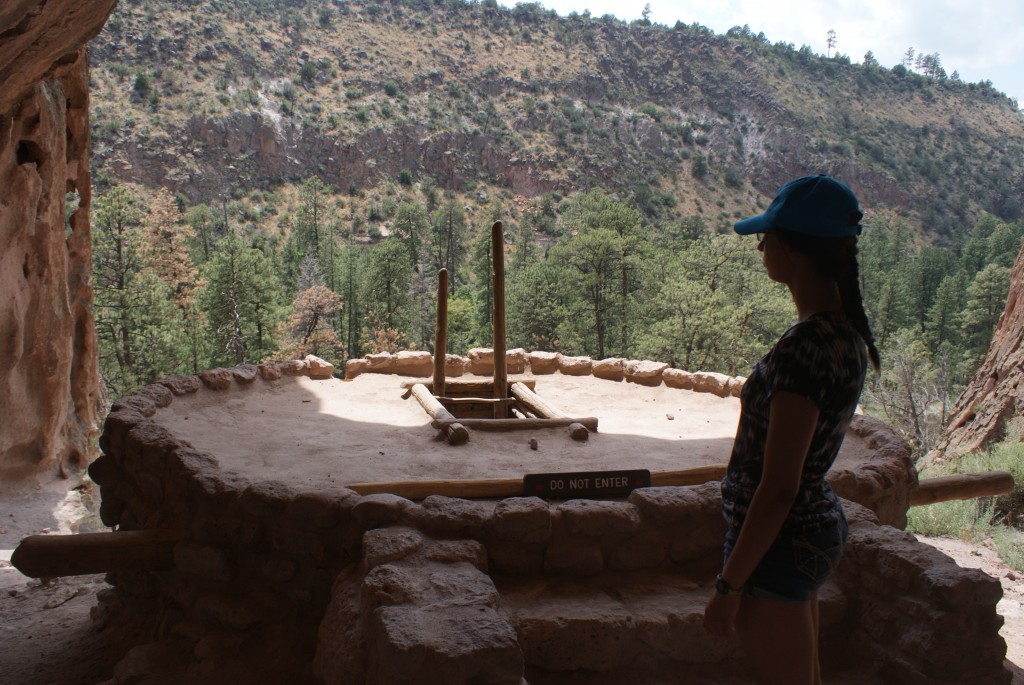 I daresay all we womenfolk in the family would have been easy with each other in any era. Need to borrow a cup of maize? No problem, chum. 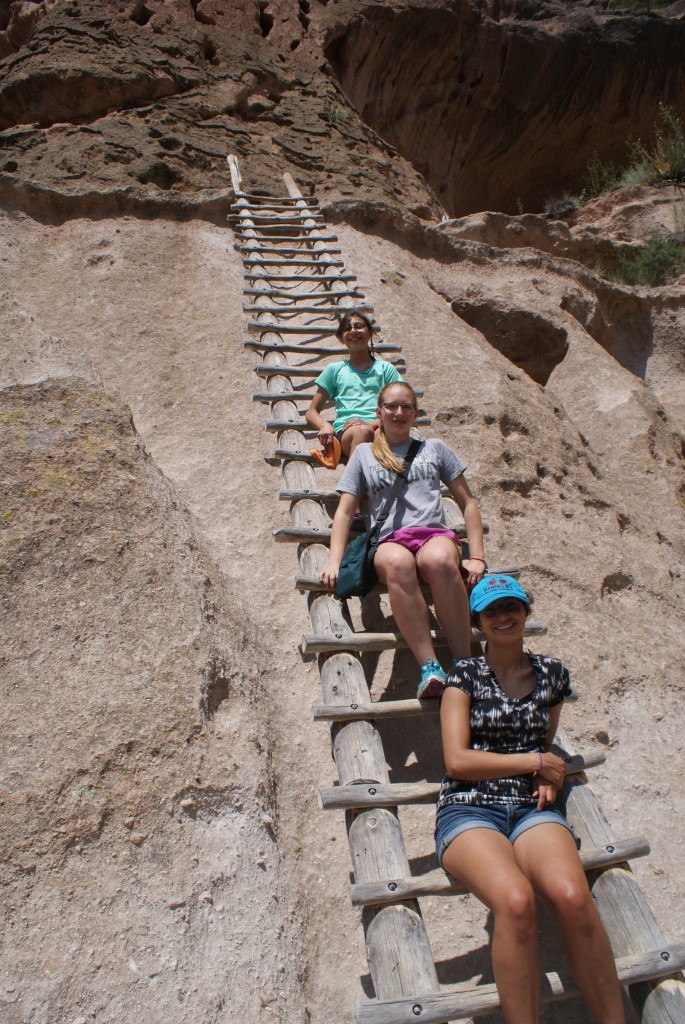 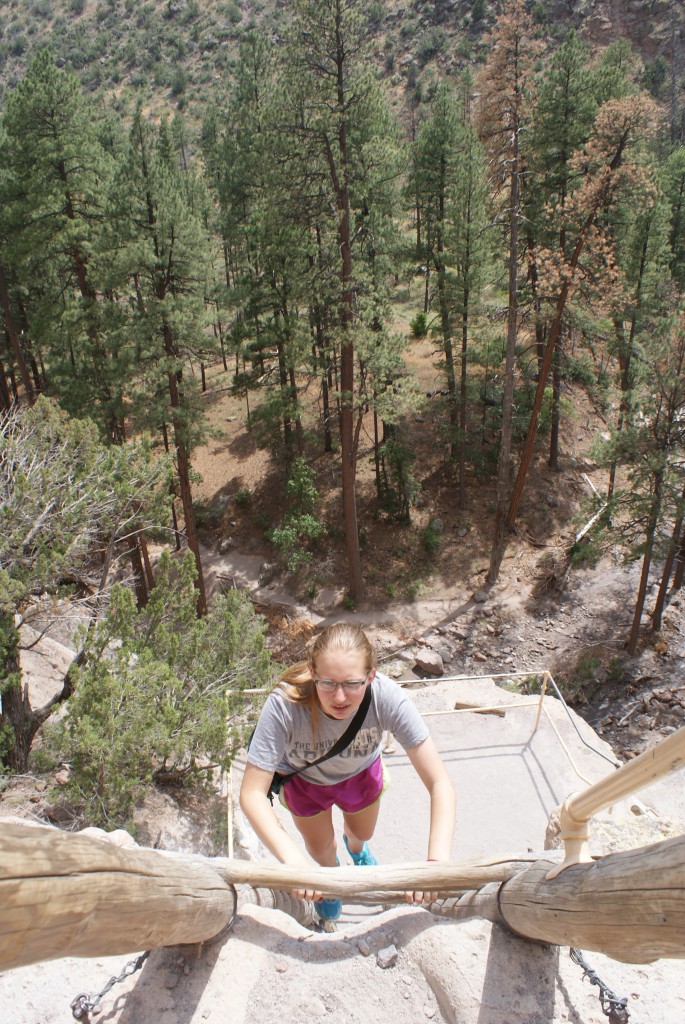 I was struck by how much the cave homes and cliff decorations were like what we had seen while living in Cappadocia (in Turkey). No matter where people were on the planet thousands of years ago, they were making the best possible use out of the resources they had at hand–and I really like being reminded that cultures continents of miles apart were essentially using the same tactics to survive. 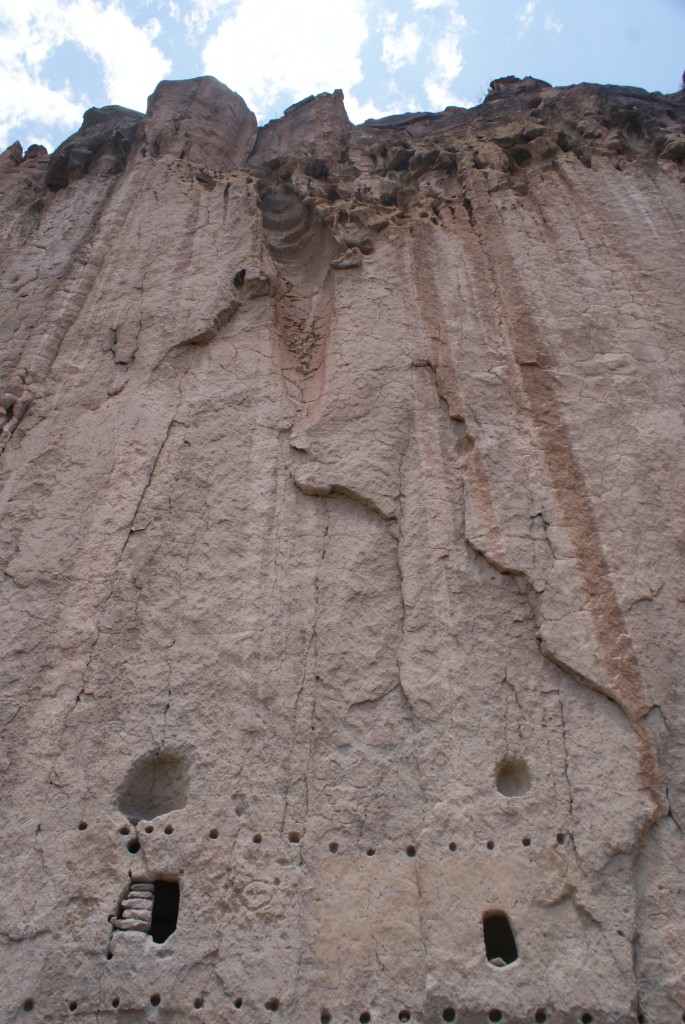 After climbing the first ladder or two, Paco was done. Fair enough. He doesn’t like heat, and he doesn’t like heights, and if I get to be scared of squirrels and chipmunks, he’s entitled to his sensitivities, too. Thus, we took turns when it came time to do the longest climb–four ladders, each taking us higher and higher. While Byron and Geoff went off to do that climb, the rest of us took a break on a log.

During the break, everyone’s personality had a chance to shine through. 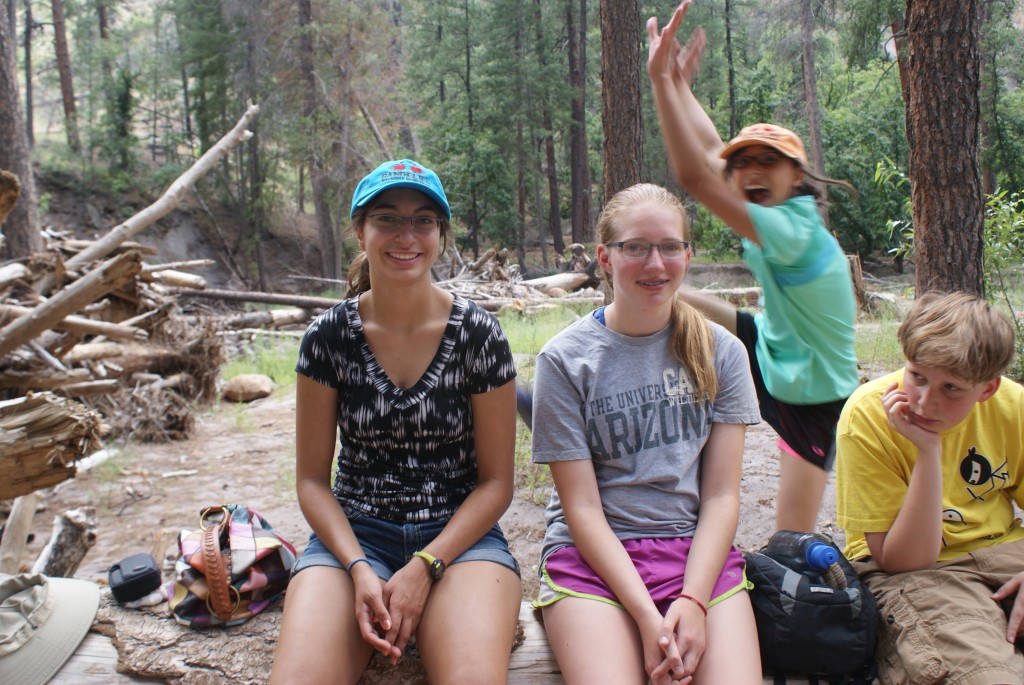 While Paco recovered from the heat, niece Sofia took the chance to play with her sister and cousin Allegra’s hair. 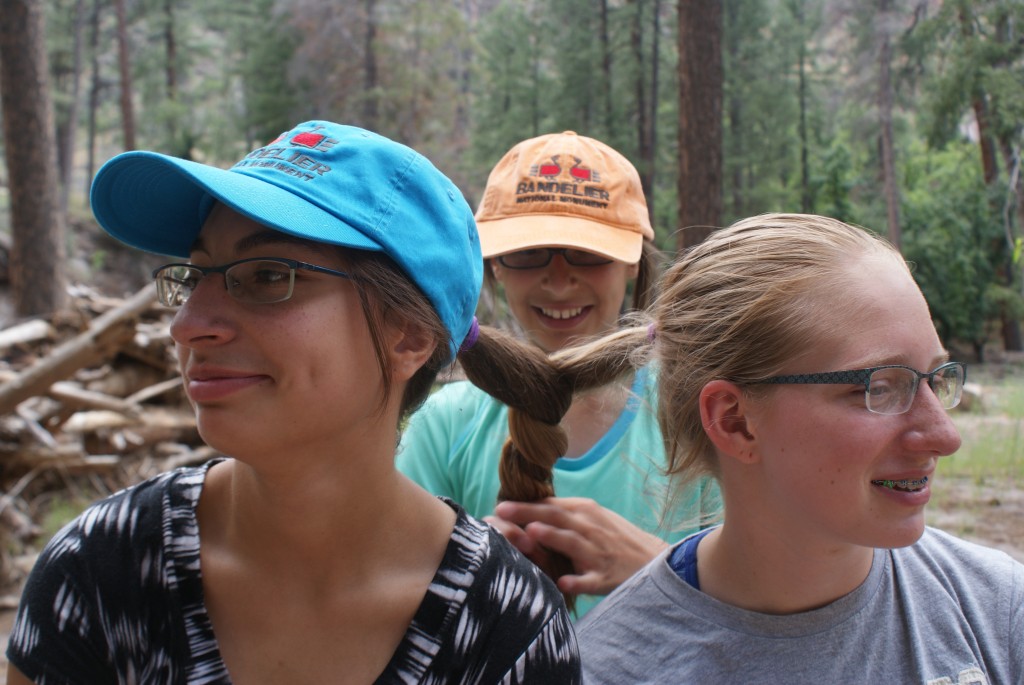 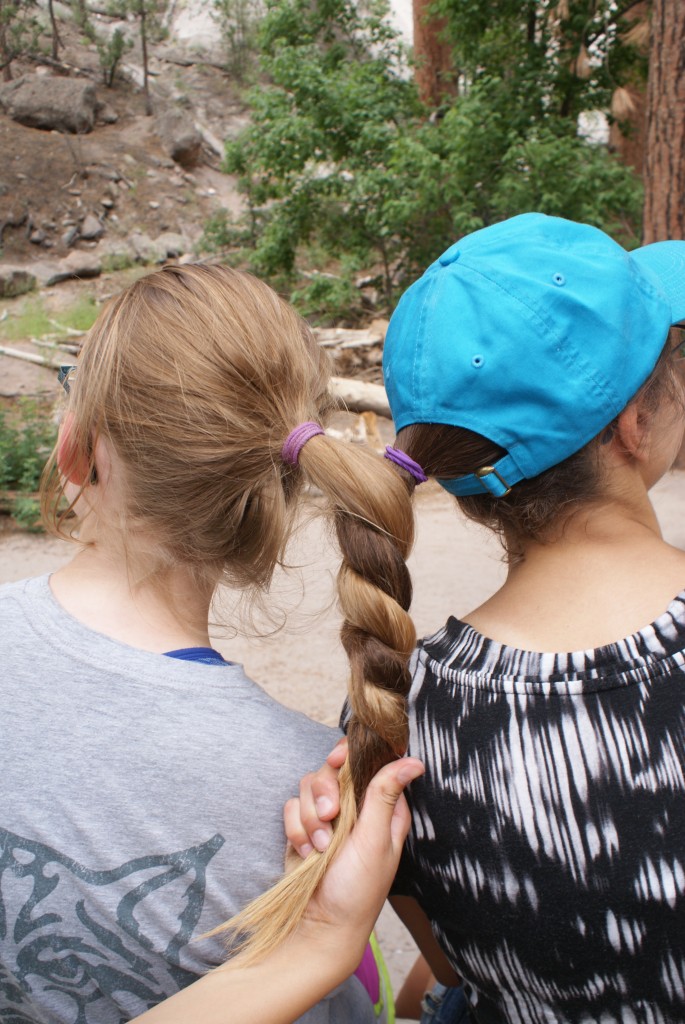 I also find that a log in the woods is an excellent place to open a beauty shop. 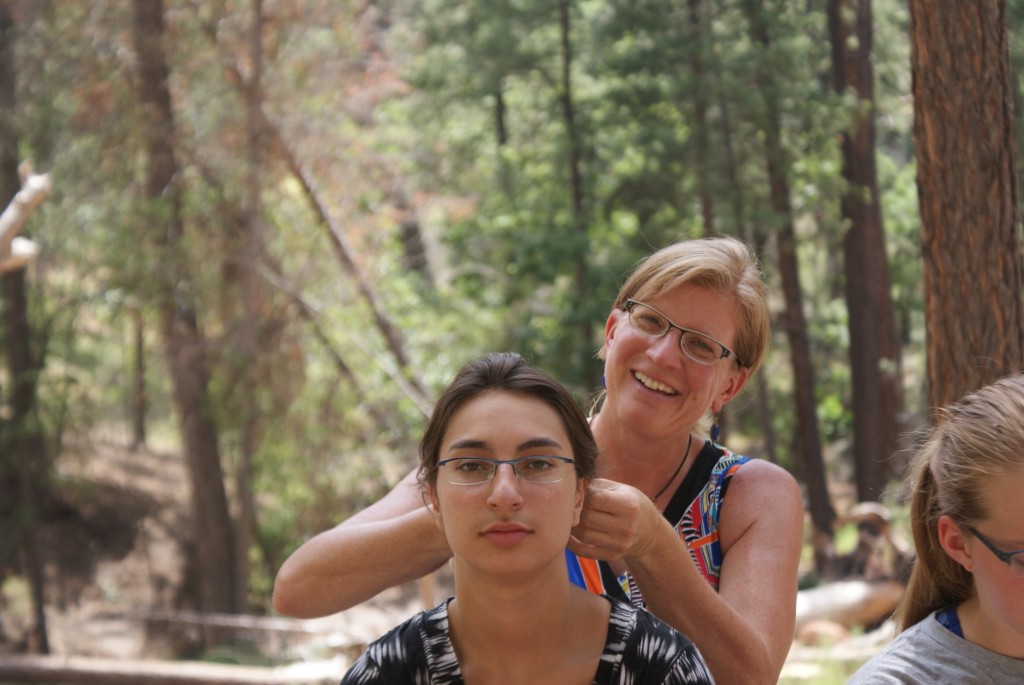 Sometimes my customers are skeptical about my work–but then they see the final product (a herringbone braid!) and book their next appointment before leaving the salon. 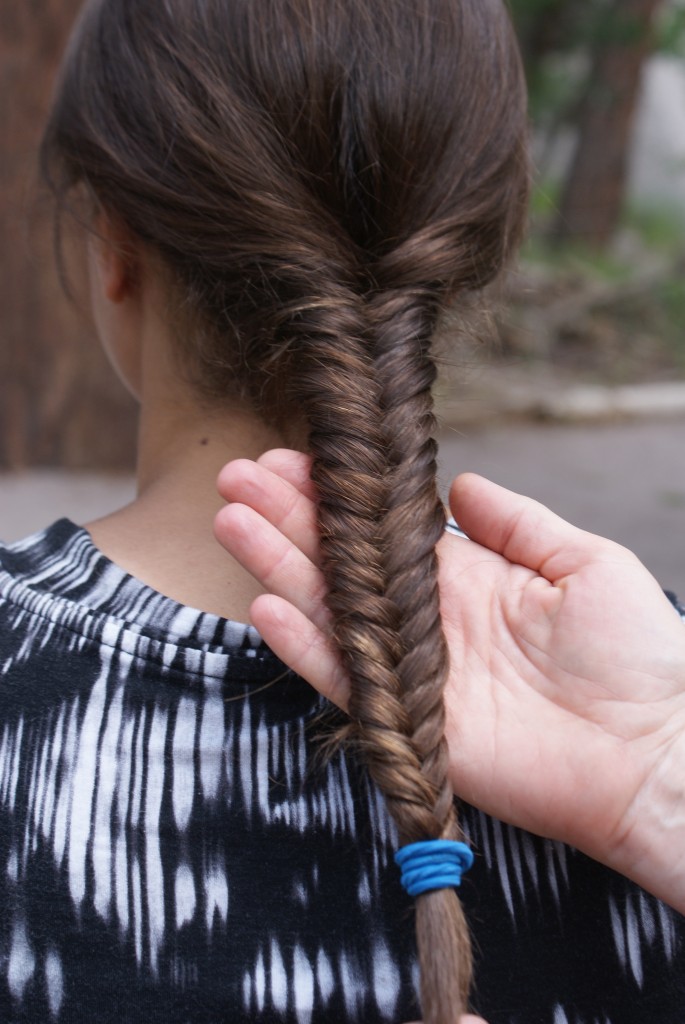 When finally the female contingent (plus my brother, doing the massive four-ladder climb for a second time) had its chance to ascend, we just kept going until we reached Heaven. There, we met God. She gave us a few messages to bring back to Earth. First, She would like everyone to stop insisting that it’s only the threat of Her judgment and the promise of Heaven that make people behave. She would like to emphasize that even without Her existence, human beings have it within themselves to Do the Right Thing simply by virtue of their own ethical natures and innate moral compasses. Finally, she would like humanity to know she’s relaxed considerably on that Graven Image policy, so go ahead and engage in idolatry, guilt-free. Get a stick; do some whittlin’. Fashion a wooden Simon Cowell for yourself. God doesn’t care.

In addition to God, you know who else I saw that day? A really strident park ranger. 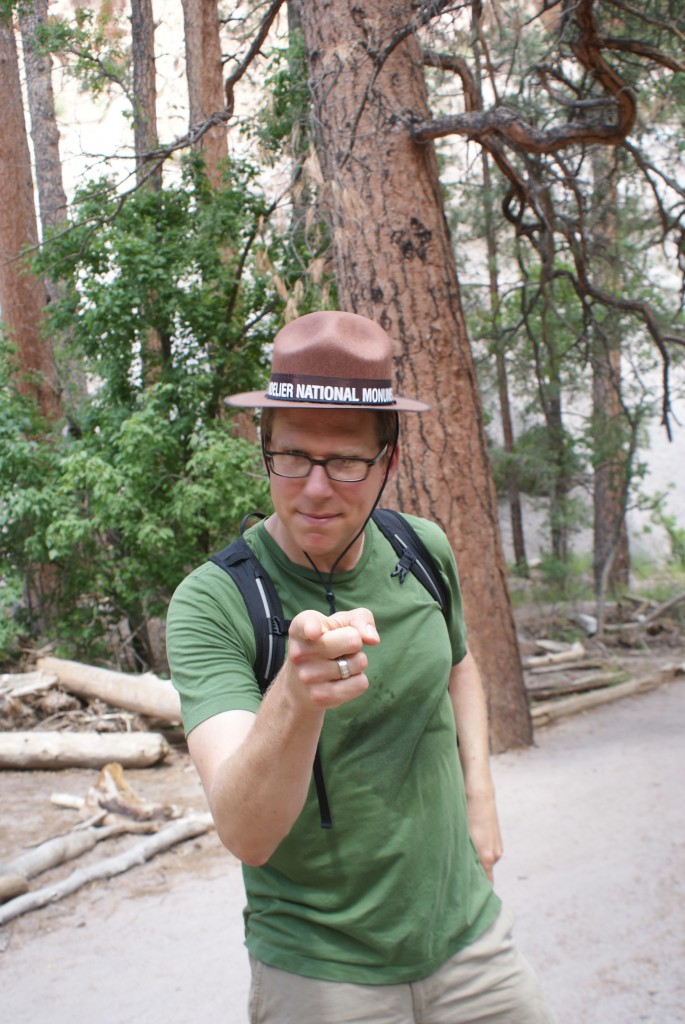 The funny thing is that Byron really was a park ranger, back in the ’90s, at Mesa Verde in Colorado. His ranger hat is protected and coveted, as is the copy of National Geographic that he appeared in, when that magazine came to take photos.

Look at Himself, twenty-one years ago, back when he was a Fresh-Faced Young Thing not yet aged by life with children and Jocelyn! 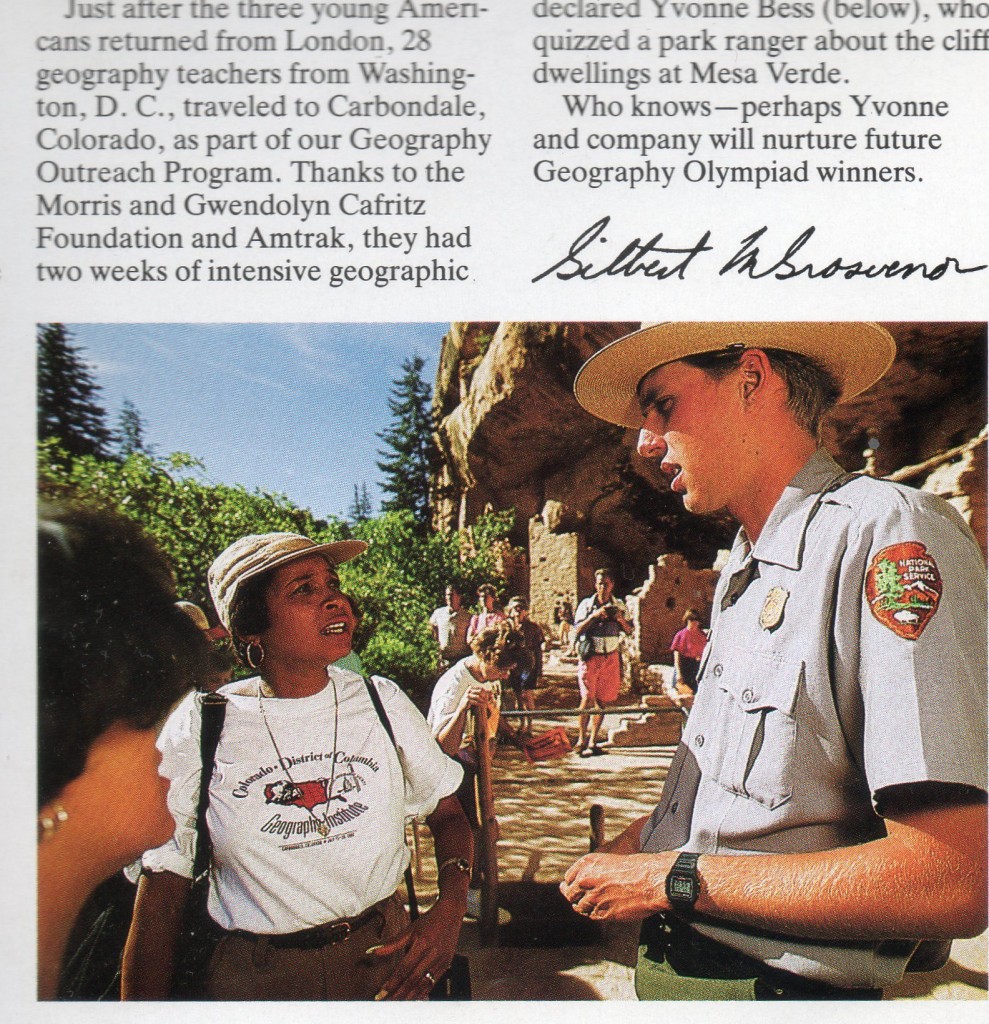 Although kids age a person, they also are damn cute when they’re no longer hot, and the threat of climbing ladders to great heights has gone away. In other words, Paco was much restored that evening, back at my brother’s apartment complex… 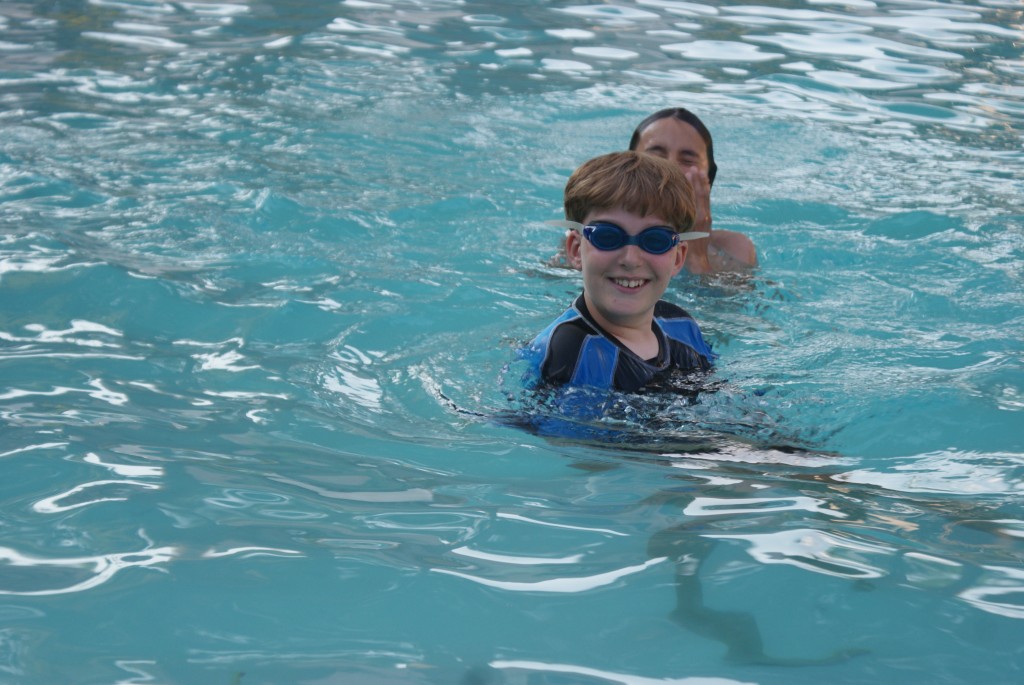 Call me perverse, but I like to end a hot, dusty day with a run in the desert. Not too far from my brother’s place is the John B. Roberts Dam, a spillway built to deal with the flooding that might occur every hundred years or so in Albuquerque. More importantly, the dam is famous as a shooting location for the television show Breaking Bad; it’s where the characters of Walt and Jesse both stand as they await pick-up by “The Extractor.” Fans of the show might, therefore, find this image familiar: 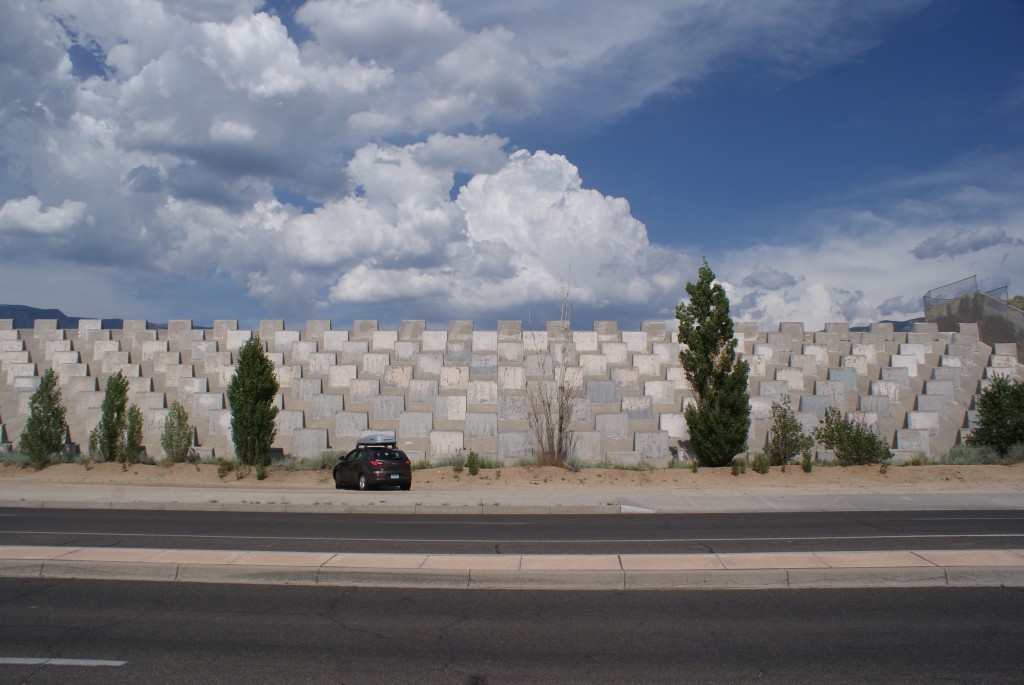 Beyond the famous wall of the dam, there is the dam itself, which comprises a warren of looping trails that work their way up to the Sandia Mountains. It’s a magnificent place to go for a run. Although signs warn of rattlesnakes, I was raised in a rattlesnake neighborhood, so I’m well able to convince myself them stomach-sliders are more afraid of me than I of them.

Yet I squawk when I see a chipmunk. Go figure. I am Ridiculousness stuffed into a sack of skin. 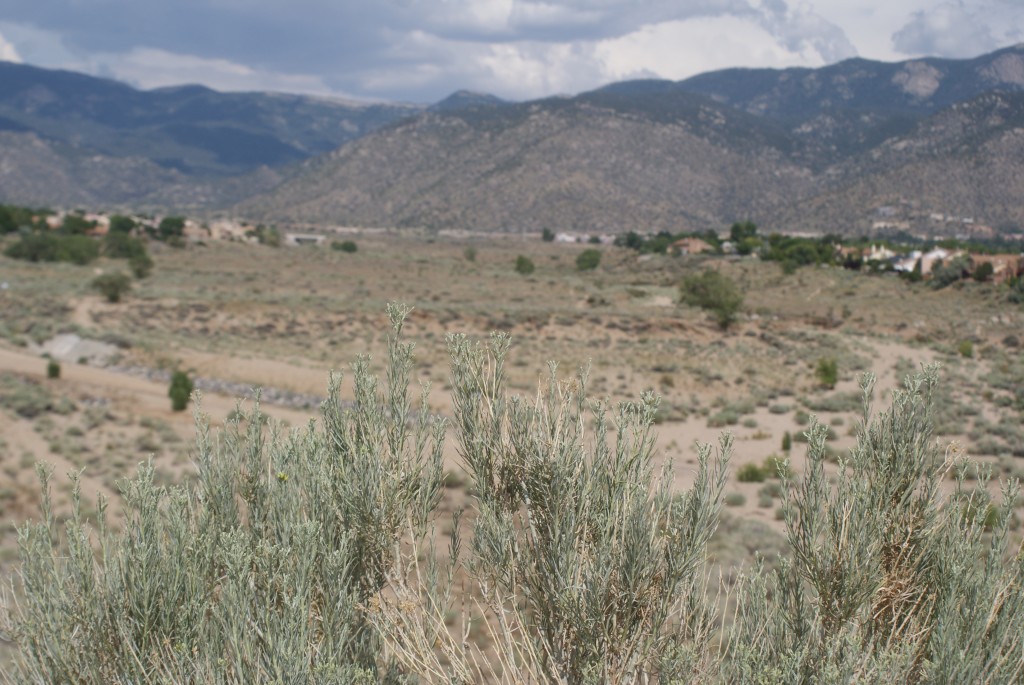 There could not have a been a better way to end a fun day at a national monument with all-too-little-seen relatives than to go for a run in a dusty dam. I padded through the cactus, toward the mountains, under the softening sun. A tumbleweed rolled across my path. Then a roadrunner zipped by.

And I remembered: the very best travel is accomplished on foot.