Twelve Days of Summer with My Twelve-Year-Old: DAY TWO 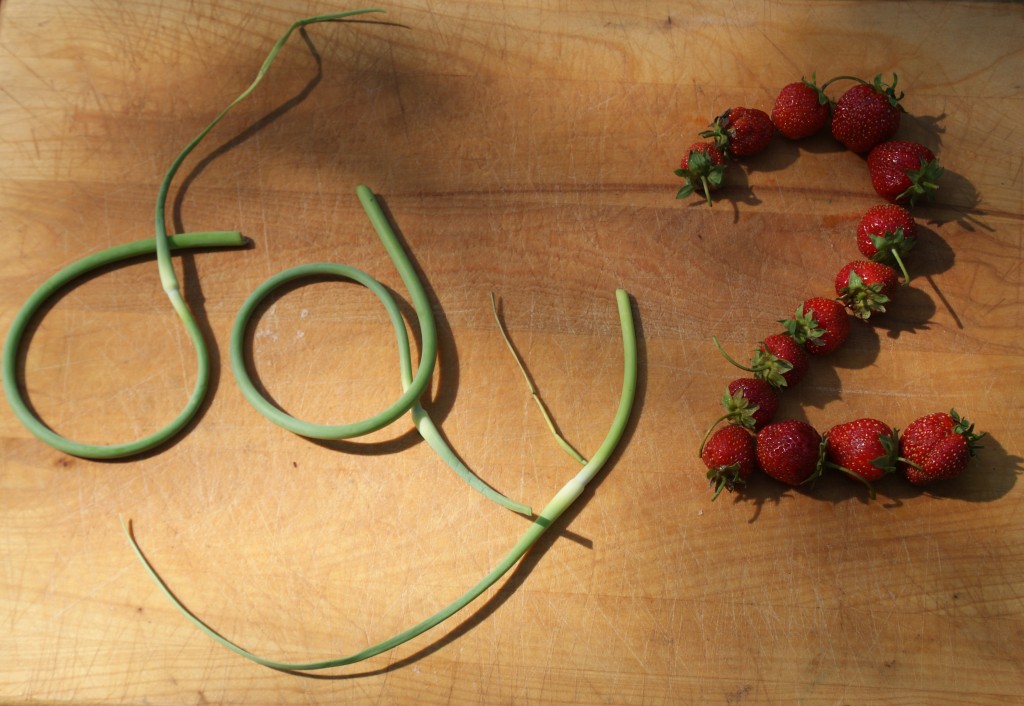 On the second day of Summer(mas), my middle schooler gave to me: commentary on two purple gloves

There’s always laundry to do.

At least in the summer, there’s less washing of fleece and wool and more washing of clothing lacking sleeves or full legs of fabric. Then again, there are more visitors during the summer, which means more sheets and towels being used. No matter the season, each week’s mound of dirties is bigger than a breadbox, smaller than a house.

My Method of Operation with dirty clothes is to wash and dry a bunch of loads over the weekend and then set aside some time on Monday evenings to stand in our bedroom and fold for an hour or so.

I rather enjoy it, to be honest.

Some years ago, when I was kvetching about how much I hate washing dishes, my mother-in-law noted, “So it’s not a zen experience for you, huh? I find dish washing calming.” Folding laundry is my dish washing–the household chore with deliberate rhythms and practices that makes me feel lighter by the time I’m done.

Don’t get me wrong: I still hate laundry on a fundamental level. As a rule, I’m better at the things in life that require getting on an airplane and winging off into New Vistas than I am at facing a predictable task repeatedly. I like Different. I like Unknown. I like Variety. I like Someone Else To Do The Dirty Work. I like someone else to show up and make life pretty while I hide under the deck, earbuds in, listening to Starlee Kine host the Mystery Show podcast.

So, yea, laundry sucks–but each week when I’m in the grips of purposive adulting, carrying six loads up from the basement dryer, readying myself to separate the chaotic jumble into orderly stacks, thinking to myself, “Here’s another hour of my life I’ll never get back,” I am able to relax into the task.

It helps that I often drag out the small television set, usually tucked away on a wooden stand in a corner of the master bedroom, and do the almost-unheard-of thing called “watching shows in real time as they are broadcast.”

You might want to brace yourself. I’m about to make a shocking, even painful, revelation. My face reddens as I prepare to type these next sentences.

During certain parts of the year, on Monday nights, Dancing with the Stars is on.

My dudes: I watch it.

Some time ago, my mom came to visit, and it was important to her to keep up with Her Show, not to lose the thread of the competition. So I watched celebrities doing the cha-cha-cha with her. IT WAS A BONDING THING I’LL HAVE YOU KNOW.

Then it kind of stuck.

In my defense, I don’t always watch it. I mean, sometimes I can’t take another shirtless dip from a soap opera bemoaning how difficult he finds the sharp angles of the tango. Sometimes I want to hurl a handful of my necklaces at the screen when yet another weeping starlet recounts, in the weekly “wring-the-audience’s emotions package,” the most difficult year of her life–you know, when she had acne and went on audition after audition but kept being called Crater Face by insensitive casting agents.

But then there are seasons when Kirstie Alley’s going to bring her Crazy to the mambo, and I’m there. With it. Agape as the fringe shakes, hoping for a wild nip slip.

During seasons when I can’t tolerate the D-list celebrities who have been drafted to wear modest heels on a too-small rectangle of flooring while dancing to today’s hits sung by professional back-up singers and being judged by barely-corralled variations of Has Been, I make a smarter choice. I turn on PBS.

Specifically, I turn on Antiques Roadshow.

As it turns out, Antiques Roadshow is to Paco what an open compost pile is to a black bear in November: a buffet of delights.

The other week, when the mountain of freshly washed clothes seemed particularly huge–bigger than both a breadbox and one of them Thai stilt houses–I sighed tragically while plugging in the tv. What sad lot had befallen me! Having to face a dome of laundry! Which meant our lives are blessed with an abundance of stuff! Which we are able to clean easily with a machine in our lovely home! And dump onto a soft bed covered with pillows! While being entertained by technology and intelligent talking heads! All while using my strong arms!

Feel for me, Reader. Feel the feels a middle-class white lady in a relatively safe country deserves when she is healthy, overly well fed, has and excess of stuff, and is entirely too lucky.

Yea, I feel you: you got Zero Feels for me.

Don’t expect me to feel sorry for you, then, when your mini-van breaks down in the Dairy Queen drive-thru.

Like your Salted Caramel Truffle Blizzard won’t tide you over until AAA brings a tow-truck.

Now tuck into that Blizzard, shhhhhh, and let me continue.

We were comparing Paco to a black bear, ‘member?

And Antiques Roadshow to compost.

Maybe don’t tell the producers their show has been likened to garbage. They’re sensitive types, those PBS-ers. (*I just typed BS-ers*)

Paco certainly doesn’t think it’s garbage. That lad is nuts for appraisers and “found in the attic” baseball cards and craftsy folk art (do. not. get. him. started. on. slave. quilts.).

On the night in question, I had no sooner plugged in the tv than the kid, five feet away, whipped off his gaming headphones, pushed the rolling chair away from the computer, and asked, “Wait, is Antiques Roadshow on? Let me get out of my game, and then I can watch with you!”

Thinking through the logistics of his very important next half hour, he added, “And I’m going to pull in that black softie chair from my room and run downstairs to grab my dinner–Dad said it’ll be ready soon–so I don’t have to be disturbed once they start trotting out rotting sideboards and pre-Columbian pottery. Be right back!”

Four minutes later, as my piles on the bed grew from Husband’s Exercise Clothes to Husband’s Hoodies to Son’s Pajamas to Jocelyn’s Underwear (a suspiciously small pile, considering seven days had passed since the last folding), Paco settled in.

Spooning chicken curry into his mouth, he stared at the lively Japanese sculpture being examined on the screen and yelled excitedly, “It looks like the Cat Bus from Totoro!”

Next up? A wooden secretary purportedly from 1760.

“I don’t feel good about this one, Mom,” the middle school critic announced. “It looks too shiny. I think this lady’s going to get skunked.”

I’ve said it before, and I’ll say it again: the kid’s taste is impeccable. He knows a fake when he spots one. Indeed, the secretary was a poor replica of the original. Also, if he ever meets someone and then later counsels, “I don’t think this is someone you’d enjoy, like, for a longer time, in real life,” then do the wise thing and abandon all designs on friendship. It won’t end well.

As the disappointed secretary owner dejectedly stared at the faux antique she’d been proudly showing off to visitors for the past two decades, Paco set down his dinner bowl and slid slowly off his smushy chair to the floor. With half his body on the chair and half draped over the rug, he snagged the now-empty silver mesh laundry bag with his feet. Picking it up, he jammed it over his head and announced, stiffly, “I. am. a. robot.”

Moving as though his hinges needed oiling, he reached for his bowl of curry and–in a move so smooth only a twelve-year-old robot could have pulled it off–he maneuvered it under and inside his robot helmet.

Happily and literally enmeshed from scalp to hip inside a laundry basket, a smudge of sauce on his cheek, he lay at my feet, half on the chair, half off, alternating bites with comments:

“I love how that appraiser’s bow tie is crooked! Whenever he leans over those purple gloves to get a better look at them, it seems like it’s going to start twirling ’round and ’round. Between that tie and his slicked-back hair, doesn’t he look like The Penguin in Batman, Mom?”

As I added a pair of shorts to my husband’s line of piles, I took my eyes off the screen, looked at what was in the room with me, and realized: there’s no such thing as drudgery or an unwelcome chore when my buddy is nearby.

I would fold laundry forever, if it meant I got to watch The Penguin while a curry-eating robot pointed out the subtleties of lost treasures.

2 responses to “Twelve Days of Summer with My Twelve-Year-Old: DAY TWO”