When I was sixteen, I made a difficult phone call.

Having started ballet and modern dance lessons at age seven, I, as a teenager, was ready to be done. Once high school hit, I got a job at the mall, joined a variety of extracurricular activities, and craved All-Important and Enriching Time with My Friends Which Usually Entailed Us Doing Nothing While Hoping for a More Interesting Future. Thus, I found it difficult to turn over my late afternoon hours to dance classes twice a week.

The secret hope was that my mom would convey to my dance teacher the decision to quit. I’d seen this happen a couple of times during ballet class, when a parent would stop in to announce, “Chris made the cheerleading squad, so she won’t be taking lessons any more.” Bailing through parental effort seemed easy enough.

However, when I told my parents I wanted to stop with ballet and modern, they understood, were sorry to see a good thing go, and told me the next step would be for me to call Miss June and tell her of my decision.

Somehow, having say the words out loud to Miss June made me feel guilty, like I’d been bad, like I was doing something wrong in deciding to move on. She and I had a history that stretched all way back to when I was learning to read chapter books, back to when her face lift was fresh. She’d been something in my life, so un-tethering myself from her orbit–jettisoning myself from it, in fact–created a fair bit of cognitive dissonance in my brain.

Fortunately, the dial on a rotary phone took forever to spin around. Even the number six–midway on the wheel–dragged. And wouldn’t you know Miss June’s number had a zero in it? My pointer finger scraped that zero from the right, down to the bottom, to the left, all the way to the top of the circle. In slow motion, the dial spun back to its resting place.

In between each number, I stretched out the process by fiddling with the copper magnets that hung notes onto the old-fashioned washboard next to the phone. 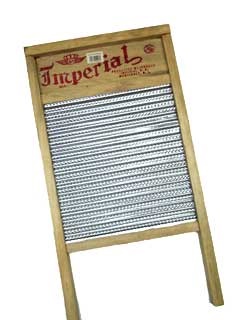 If it meant I didn’t have to have that conversation, I could have played with those magnets all day. I wanted to wish my way past saying the words out loud and get to the end point of not having to go to dance class anymore. Dealing with the in-between, the part where I took responsibility for communicating my choice, made my stomach hurt.

When Miss June answered the phone, I tried to make it quick and painless by staying away from specifics and simply explaining “I’m really busy these days, so it’s not going to work for me to take lessons any more.” While she seemed a little taken aback, Miss June wasn’t stunned. She’d taught enough years to understand the rhythms of girls-becoming-women. What surprised me was her closing comment, one that left the conversation on a note of faint regret.

“What’s a shame is that you do have the potential to become a fine modern dancer. I did think you might pursue that.”

REALLY? In all the years of hearing that I needed to suck in my tummy, all those years of having micro-adjustments made to my posture and stance, all those years during which my sole source of dancing pride was that I was a natural jumper (watch yourselves, ceiling tiles: I’m comin’ fer ya), I had never gotten the message that any part of my bulk should consider pursuing a future in modern dance.

That’s the nature of teachers and students, of course. The teacher gives helpful words of correction; the student hears the words but not the positive intention, and sometimes the larger message is lost. In the moment, I felt a combination of “Well, whaddya know?” coupled with the relief of “Okay, can I hang up the phone now?”

We had the conversation, and it was over. Inasmuch as possible, the relationship between Miss June and me remained “clean”–that is, free of the confusing, hurtful smudges that blur things when direct conversation is avoided.

Didn’t wanna do it. Did it. All good.

If you have the conversation, there’s a chance for a fair airing, and even if you don’t agree with each other, you’ve treated each other with the dignity and respect that go missing when the conversation is avoided. Don’t diminish each other: strap yourself into your Big Girl undies and have the damn conversation.

Misunderstand me not: I’m not waving my flag of superiority from on top of The Hummock of Morality. There have been countless times I’ve sidestepped having a direct conversation, simply because I couldn’t be bothered to dig deep for the energy and courage to face something head-on. Here’s an innocuous example: in college, at my work study job, I would sometimes decide I was ready to leave, and then I’d just kip out without ever notifying my supervisor. When I’d show up the next time, he’d ask, “So where did you go the other day?” My response should have been, “I didn’t feel like finding you so as to announce that I wanted to cease my data entry and, instead, sit under a tree and listen to someone play the guitar in the sunshine, so I just left.” However, all that came out of my mouth was, “Um, huh? I guess I had to…like…go. There was a thing.” Then I tried to use body language to communicate that it was somehow his fault that he had to ask this question.

That’s some crazy tough body language. It would have been easier to shape the hell up than to shift blame through pronounced slouching.

As the years have ticked by, and I’ve gotten older–along the way wondering when I’ll ever truly feel like an adult–I’ve gotten better at dealing with things I don’t want to, and if that’s not Adulthood, I don’t know what is. More and more, I am convinced that having the conversation is an essential part of keeping my emotional life clean. When I can’t say what clearly needs to be said, I feel dark and sick inside. When I know people aren’t saying what they really want to say, that, too, sticks in my guts.

Thus, last week when I was hit by two significant non-conversations, my mood plummeted. Because individuals in my sphere opted not to step up and have the conversation, I felt kicked in the gut. If they’d just gotten over their interpersonal cowardice, it would have been fine. The issues weren’t huge, but somehow these individuals’ defaulting on their responsibilities and channeling their choices sideways made me sad (in one case, I was informed through email by a third party of someone’s decision; in another case, I was asked to take charge of a conversation that I had no business being involved in. In both work-related cases, I was left without recourse–situationally stymied from the redress of further conversation).

I was in a right funk, and there was no thinking my way out of it. I even shouted to my empty office, “WHY CAN THEY NOT HAVE THE CONVERSATION? THEY CAN MAKE WHATEVER CHOICE THEY WANT TO, BUT THEN THEY GOTTA HAVE THE CONVERSATION.” My office, always a good listener, offered me a shot of vodka. Apparently, it keeps a bottle in the filing cabinet.

Woefully, it was too early to start bending my elbow.

Trying a different tactic, I hurled bad names at those involved. Then I hollered a bit more about “INTERPERSONAL COWARDICE.” Swearing didn’t help diminish how heavy and clouded my insides felt. Even running hard and breaking a sweat some hours later didn’t clean it out.

In fact, the only thing that helped restore my equilibrium that day was the counterbalance of a wonderfully pure moment.

I’ll tell you all about it in Part II.

I leave you now to consider a world in which Jocelyn Became a Modern Dancer. Apparently, I also became black in this alternate world.