Tomorrow, North America’s largest cross-country ski race, The American Birkebeiner, will be held, despite–as I may have mentioned once or twice–a general lack of snow in the region. Race organizers have abbreviated the course, and only the elite athletes will actually be skiing a competitive, timed race, but, heck, such decisions have salvaged the thing.

Meteorological word has it, too, that The Big One is on the way, so all skiiers tomorrow, whether timed or not, may benefit from a dumpage of new snow.

For this big weekend, I’m going to recycle a post from some months back, when only one person read my blog instead of the large masses of seventeen who now do; it features my favorite Birkie story. 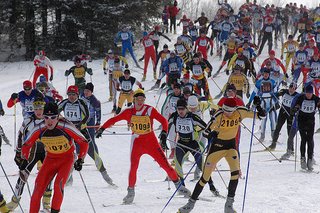 He, well…He…how shall I say it discreetly? He felt a sudden, undeniable, overwhelming need to void his intestinal regions.And, naturally, with 9,999 other jittery and nervous racers feeling the same way, the line at the port-a-johns was not short. Suffice it to say, by the time Joe-O got back to the start line, his wave–the last wave–had already started. He could still begin the race, but his shot at a stellar time, one that would move him up in future years, had gone down the drain with his intestinal evacuation.