I’m an Irisher by heritage (that, combined with being a quarter Finnish, makes me strangely silent yet talkative, somber yet jovial, staid yet merry), so in honor of yet another mass-media-manufactured holiday, St. Patrick’s Day, I’m resurrecting a post containing one of my favorite Irish adventures. And it doesn’t involve green beer or a dumb green hat because those aren’t actually things Irish people drink or wear, for the love of Jigging Leprechauns.

Sorry, Choochoo, you’ve already read this one–you, and two of my students who were hoping to suck up by commenting on my blog a few months back. 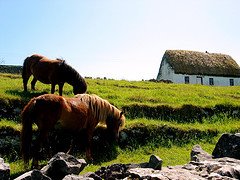 “I am yours and you are mine”–Peter Shaffer, Equus

When I set foot on the West coast of Ireland, at the age of 20, I believed for the first time in reincarnation. Nothing had ever before felt so familiar and right.

Thus was launched a long-distance love affair, played out during my infrequent visits across the ocean.

However, that dewy, 40-shades-of-green country and I very nearly went into couples counseling when I made the mistake, some years later, of trying out an equine adventure on its misty shores. Those “lovely Irish ponies” that The Rough Guide raves about? Not so much. Nowadays, I won’t even say the word “saddle”at the same time that I look at the color green, lest the two come together in some freaky synergy and cast me again onto the back of a pony in Ireland.

But I’m getting ahead of myself. Here’s the tale:

About seven years ago I was in Ireland (as we’ve established: the home of my heart), on the West Coast, staying in a little hamlet called Cleggan in the region of Connemara for a week, exploring the countryside, mostly on foot. I explored old dolmens (big rock gravesites), the ruins of abbeys, the local pubs. After a few days, I started hitch-hiking around the county and taking bus trips to nearby cities. But eventually, it was time to turn to a different form of transport: the renowned Irish pony.

Off I went, whistling and wide-eyed, to the the Cleggan Beach Riding Centre ; there I discovered that there were afternoon tour groups, wherein I and 15 other unsuspecting sods could rent horses and be taken on a jaunt around the area, particularly across the beach and out to a small island that is accessible by foot–or horse–only at low tide. Okay, cool. I was in.

Each client was then outfitted with his/her own horse. Why, I wondered, did the teenage workers snicker when they saddled up and mounted me on a horse called “Dino”? Was he really old and out-of-date like a dinosaur? No, the workers assured me, he was more like a camel than a dinosaur.

With that cryptic information given, they left me to figure out the reins. A camel, eh? I started musing about how he must have humps on his back or like to walk in rolling fashion across the sand, or maybe he’d deposit me at a rustic Bedouin campsite at the end of the day, where the natives would teach me how to make exotic bread that I would bake in the remnant heat of the desert sand. Little did I know he was a camel in that he had no need for or desire to be around water.

After a short training session (during which only one woman was thrown from her horse into a muddy corral at full gallop), we headed for the sea. That’s right, my water-hating steed and I were heading for the sea. The SEA.

For the first hour, it was all tra-la-la-do-re-me-fa-so-la-ti-do on my part. “Hey, look at that shrub! I’m in Ireland looking at a shrub! Ooh, and that cottage has a very picturesque thatched roof, doesn’t it? I can notice such things, even though my glutes are seizing up, because I’m in Ireland, and the sun is shining!”

Why, there, off in the distance, was Omey Island, our goal. The tide was low, so the sea had receded, laying bare a clear band of wet sand that we could saunter across to explore the island.

But the timing was off that day. As soon as we got out to the island, the tide began returning water to the shoreline. Bit by bit, the band of wet sand shrank down to nothingness, replaced by churning water. “Ah, pish posh,” said our guide. “The water isn’t so very high! We can just turn the horses into it and wade back over to the beach.”

It was at this juncture that I discovered hard-hooved horses are, in fact, good climbers. At my first attempt to get Dino to turn and wade into the water, he reared and clambered straight up a ten-foot mound of slippery rock, with my carcass dangling off his back. My strangled yelps brought over one, then two, then three guides, all with panic in their eyes. They could smell the lawsuit.

When the three of them couldn’t get him down or anywhere near the water, they bailed on me. As they scampered back to their own horses, they tossed out, over their shoulders, “Just keep trying. Really dig your heels into him.” And by Jehosephat, I did. Spurs were not necessary that day, as my London Underground hiking boots did the job. I felt up Dino’s internal organs with my treads and forced him into the water.

While the rest of the touring group tried to line up back on the island and make some sort of organized queue that could be led across to dry land, I gave Dino his head and made him keep trudging through the tide, now up to my knees, as I huddled on his back. My jaw was aching from being clenched, and I was ready to leap from his back and swim at the slightest provocation, leaving him to his fate with the mermaids and fishies. Have a happy life with Ariel and Flounder, you big dumb bruiser. 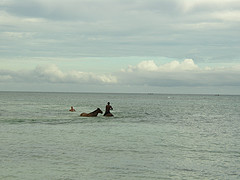 After what seemed like three hours–it was more like 8 minutes–I reached land. There, on the beach, was the owner of the Riding Centre, in his little van. Some of the panic he’d had on his face as he watched me subsided. When I announced, “Okay, someone else can ride this nag back to the stable. I’m getting in your van, and you can drive me back,” he was composed enough to say, “Ah, lass, it’s all right now. You’ve got the luck of the faeries on your side. Just think of pink stars and green clovers while you ride him back” before pulling out a bar of Irish Spring soap and rubbing it all over himself while humming “Frosted Lucky Charms: They’re Magically Delicious.”

I wanted to resist further, but then he pulled out a harp and started crooning “Danny Boy” in a lovely tenor as he drank a Guiness and ate a heap of potatoes; in the face of his Irish charm, I was defenseless. I stayed on Dino’s back to the bloody end. And that night, I assuaged my nerves and my glutes at the pub with, *cough cough*, several pints of hard cider.