The Day of Your Life

Patriotism tires me; xenophobia makes my eyes cross. Doping is poop on a Triscuit.

So I should be able to bypass them Olympiciacites that are being broadcast on the talking box, right?

Every night of late, the fam has been gathering on our full-sized bed in the master bedroom and watching the images being thrown through the air from Beijing. As much as I don’t really care who wins what, the media coverage does manage to scoop me up and dangle me from its pinch . As a result, I find myself a fan of much-decorated American swimmer Michael Phelps. So does Girl, who asserted the other night that someone in our family needs to marry him, the man with the most gold–since Mommy clearly didn’t when she was choosing a mate.

Ever the giver, Wee Niblet piped up immediately and offered to marry the swim master, stipulating that his willingness rested on getting permission to call his new husband “Michael Phelpicannia” during their duration of their relationship. This being less demanding than a vow to “honor and obey,” I fully anticipate a poolside ceremony in 20 years, an occasion that will certainly merit the purchase of a spectacular mother-of-the-groom bespangled tankini. 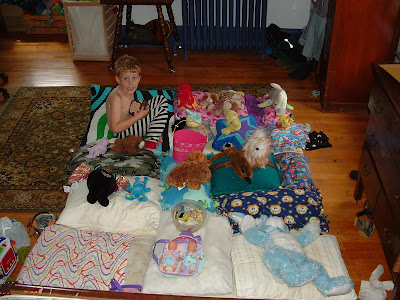 The kids built an Airplane to Beijing, which they have been flying to various sporting events this week. All of the stuffed animals pictured here are currently residing in The Olympic Village. The big blue bunny in the front (Snurkle) is rooming with French swimmer Alain Bernard; Snurkle begins each day by yanking Alain’s Speedo to his ears and giving him an atomic wedgie.

Indeed, our household finds itself carried away with enthusiasm for certain of the athletes, those who seem awed and moved by their exceptional fortune. In addition to lapping up His Phelpicannia, I didn’t hate the U.S. men’s gymnastics team for fighting its way to a bronze medal–and then being delighted and humbled to have achieved that “mere” third place.

Yup, in the face of these public triumphs, I prickle up with goosebumps, despite myself.

As I ponder why that is, I’ve realized that it feels a privilege to witness another human being’s best day of life, someone’s perfect moment of realizing potential, a person’s cresting the arc of training and talent. Cynicism drops away, and I am affected as I watch an athlete’s heart skip a beat from sheer joy.

All of this got me thinking, of course, about what the “day of my life” has been so far. Sure, I dropped out of the U.S. Junior Olympic archery team’s training program at age 5, just before I actually took up the sport or ever picked up a bow, so my day of life is less than Olympic in scope. However, I’ve still relished my own moments of primal excitement, of serendipitious vicissitude. Sifting through the candidates has proven, too, that I am Phelpicannian, for I have a host of golden moments to draw from.

There was, for example:

**The day in preschool when Mrs. Ungafu took us, her widdle midgies, on a field trip to the local potato chip factory, and we each got a free bag of chips at the end. Yea, you read me right: free chips.

**The day in kindergarten when Mrs. Jacobsen, my teacher, forced me to use scissors with my right hand, even though I’m a leftie; tearing the scissors from my left paw and shoving them into my right, she instructed, “Only the Devil’s Children use their left hands.” Salvaging the day, I promptly called upon my winged minions and fast-tracked her to the bowels of my daddy’s crib. Good times in Hell that night, feasting upon the scrawny flesh of a biddy with a beehive.

**The day in second grade when I graduated from being a Brownie Scout to a full-fledged Girl Scout. There, in the cafeteria of Rocky Elementary, I took several joyous steps over the cardboard bridge that symbolized my journey. While that sounds really cool and has undoubtedly created veomous envy in you, Gentle Reader, I haven’t yet sprung the big part: the bridge was covered with tinfoil and looked like real, live, breathing silver. And my feet touched that glamourous stuff.

**The day my sister and I had to go to Boulder Elementary and get some vaccinations, and she cried and gnashed and wailed the whole time, from the car to the nurse’s office and back into the car again, while I welded my mouth shut, grittily sucked up the dosages, and calmly stroked the welt on my arm during the ride home. My bravery was such that Clint Eastwood was tempted to call me that afternoon to pass on his hearty congratulations.

Except he was too busy filming Thunderbolt and Lightfoot.

But otherwise, he would have called, and that made for a killer great day.

**At this point in my memory-mining, things go silent for a few years. It was junior high, after all. There were no unexpected moments of glory. Oh, wait, there was the time my Earth Science teacher put my name on the board and announced to all his classes that I had the highest score that semester of any of his students. Then big, dumb David Zimdars came back from being sick (should’ve gotten his vaccinations) and took a make-up test, which meant the Earth Science teacher had to find his eraser. Ultimately, these were the medal-free years.

**In high school, though, I had a few zingy days, particularly the first time I entered a forensics competition (that’s “speech” to the non-oratorial, unextemporaneous layperson), and, as a complete novice, I won the thing. I believe I was wearing clogs. Yet my words overcame all questionable sartorial choices, and I won the thing. I still thrill at the memory. But whenever I mentally review that day, I always shod my feet in these Betsey Johnson heels, instead, thus upping the frisson. 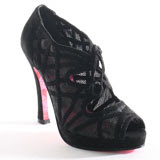 **I felt more than a frisson when, during my senior year of high school, I tromped to the mailbox one day in December and discovered there a thick envelope of admission from my first-choice college, a fairly competitive place. With great clarity, I recall ripping through the white paper, heart in throat, and reading the hoped-for words. Even with a second-place score in 8th grade Earth Science, I had made the cut! (big, dumb rat bastard David Zimdars went on to Stanford, where I’m pretty sure he failed their freshman-level Earth Science course).

**More great days in life came during college, days full of reggae and Russian lit and martini shakers and frisbees and The Cure and “Physics for Poets” (during which a solid foundation in Earth Science provided not one whit of aid) and sledding on cafeteria trays and watching the sun rise before bed. Those four years were sheer Phelpicannia.

**Beyond college came life in Minneapolis and Thursday evenings dancing at a The Saloon, just me, my galpal, and 45 of our favorite gay couples. Each Thursday’s sweat session ended with a 1 a.m. trip through the Wendy’s drive-thru for excessively good chicken nuggets (appeal enhanced by the coating of vodka on our tongues).

**Life Olympics went marathon during graduate school, years when my spine wasn’t tingling but rather slumped over books and papers. There was, however, a solo road trip during that time where my car’s alternator died, and a kind, bearded samaritan with bare feet managed–at 7 o’clock on a Sunday night, when all other mechanics were off duty–to jerry-rig a solution for the waning battery by using the pop top from a soda can. His MacGuyverish efforts caused in me whole-body jubilation.

**For the rest of my twenties and into my early thirties, pedantic days were uplifted by travel (particularly a warm chocolate croissant I licked dry in a train station in Budapest on an impossibly early morning), by hiking up mountainsides, and by unexpected pick-up lines (one man claimed himself “smitten,” which caused even my toes to flush; another–a musician–simply stopped by my table between sets and casusally tossed off a “Don’t go anywhere now”).

**Some of you might remind me, right about here, that I’ve had children, and wouldn’t the days of their birth qualify as unusually stellar? Hell no. You are twelve kinds a fool if you think I’m going to claim that passing a tetherball, including its rope and pole, out of my body in one ripping bowel movement was an instance of delectation. I will concede, however, that a visit to the Hemherroid Doctor a year after my daughter’s birth, during which he and I became intimately acquainted, and I looked up at him with beseeching eyes, silently begging him just to lance the goiter that grew from me as a tail, resulted in a moment of exuberance. The large Jamaican physician gave me a good probe and then said, to our collective relief, “Why, it had gotten so bad on its own that it went ahead and burst! What you have here is already completely deflated.” That, my cringeing friends, is what I call an unexpected bonanza.

Admittedly, though, each of these moments of remarkability pales in comparison to one twinkle that sparkled above all others.

Once a-pime, newly into dating a fella, I lay in his bed, leafing through a book, rubbing my foot over my calf, feeling content. The fella had hopped across the hall for a quick trip to the bathroom.

As he re-entered the room, he announced, “Brrrr. My feet are cold.”

Absently, I responded, “Why’s that?”

Some time later, when I recovered from my swoon,

Naturally, I had to marry someone so capable of turning my dross into gold.

23 responses to “The Day of Your Life”