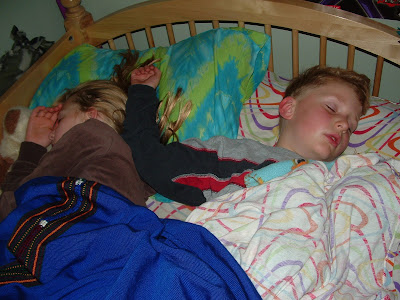 Every time they want an increase in their allowance, the kids pull this kind of emotional blackmail.

Niblet’s all, “But I’m scawwed at night and need someone to sleep wif me.”

Damn that Zoey 101 episode the kids watched, where the dorm was haunted by a malicious and creeping slimy green mist. Niblet knew there was no way the show-making people could have pretend made that kind of ooze. Clearly, it was real, and, therefore, such a thing could be spritzing around and lurking under his vewwy own bed.

He proved the legitimacy of his fear by waking up, crying, four times the other night, with a final tally of 3 hours of wakefulness between 2 and 5 a.m. (fellow passengers on this tearful journey: long-suffering Ma and Pa). Finally, after a big fight, he gave his pappy a firm embrace in the bed, and they slept in a sweaty headlock until the sun finished rising. During this time, the mother figure crept off to the guest room, where she wound herself in a fleece blanket and a smidgeon of regret that she’d had a second child.

However. The next day, as the parents dipped their heads to the scalp into a steaming pot of coffee,

Girl was all, “Okay, brudder, I’ll sleep with you tonight, so you don’t have to be scared.”

Thus, at 8:30 p.m., the two of them snuggled into his twin bed and slept, without waking, for 11 hours. And again with it tonight. 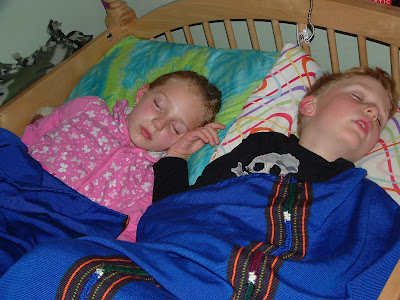 And now–*dramatic sigh*–since I’m rather a puddle on the floor when faced with their soft, seraphic dewiness, I just might have to up their allowances to one dollar AND twenty-five large American cents per week.

What a couple of manipulators.