For almost nine years, Groom has been our stay-at-home parent (I married him because he was the closest thing to a woman I could find in a man’s body). He is an example of walking Zen, so his temperament has been perfectly suited to taking the kids to storytime at the library, playing soccer in the yard, building a pirate ship out of cardboard boxes, making Mommy a latte, and cooking up spicy pork bits for dinner. It’s been a good ride.

But now Girl is in third grade, and Niblet is in half-day kindergarten, and Groom is thinking about what he wants to be when he grows up. Certainly, he’s held some part-time jobs (newspaper boy, coffee shop barista, cross-country running coach, adjunct anthropology and world geography instructor) during our marriage. And before I yanked him away from it, he was working as a naturalist at an environmental learning center. In sum, he can throw paper, grind beans, run 50K, lecture on the Yanomamo, and teach Voyageur canoeing to a group of 4th graders.

Looking at his resume, then, it would seem he can do anything but may be qualified for nothing.

To get past that little issue, Groomeo is, this semester, taking advantage of one of my job perks: free credits at the college where I teach. While he’s already got a degree from one of them spendy private liberal arts institutions, he’s now experiencing the rich and diverse pageant of humanity known as the community college classroom as he takes ceramics, drawing, and 2-D digital design courses this semester, with an aim, ultimately, to earning a second degree in graphic design or art education. While he’s heard my stories for years about how agonizing it can be to teach students how to be college students while they’re in college, the reality of being in courses where he’s the only person to turn in an assignment when it’s due has been occasionally startling. Equally startling for me has been the inside glimpse I’m getting into my colleagues as they instruct my husband. Since Groom and I have different last names (he’s “Smothers” and I’m “Brothers”), the instructors of his classes don’t know that they’re teaching my husband.

Even better is the fact that one of his courses is taught online (the 2-D digital design), so I can read the teaching and look right at the class.

While I think most of my colleagues are crazy-ass talented rock stars, not everyone is turning in a performance worthy of Ozzy biting the head off a bat. In fact, I’m discovering that sometimes students do terrible work or no work at all, and still they get big points. And sometimes instructors send out messages to their classes that are so undecipherable and riddled with errors that I have to read it out loud seven times before throwing up my hands and saying, “I have no idea what she’s trying to tell you. I don’t think she’s ever written a sentence before.”

But since I’m merely a fascinated onlooker, I can only read and blush and apologize and try to urge Groom to set the standard, and maybe everyone in the class, from the other students–to the teacher herself–will realize that the work can be better.

In the 2-D design class, the students are asked to post their assignments to a class blog, so everyone can view the image that’s been created, along with an explanation of what the student is trying to achieve and how he/she went about making the final image. Here are a few copy and pastes from Groom’s classmates, as they elucidate the subtleties of their pieces, on that blog:

“For my abstraction, i chose pieces of fruit. I tried to get a real close up image so you weren’t exactly able to see what it was. I wish it flowed more than it does because I don’t think the art work is very balanced.”

“I think the pictures here speak for themselves. I did not use any computer programs to maniulate the images because the images are cool on their own.”

“I used mostly images and shapes that appeal to me and tell who I am. Sorry It’s so small but I had to resize it that small to get it to fit.”

Clearly, these students have taken chisels and pounded little holes into their hearts which allow love and passion and emotion to flow out of their chests and into their art. On top of all that, their critical thinking is staggering.

When I see the larger context of the entire class’s explanations, I find myself appreciating, on behalf of the, em, challenged instructor, that she gets to have Groom in her class. He’s generally a person of few words, but at least he’s willing to take the time to explicate his process. So, here, for your reading enjoyment, is one of the Groom’s posts for class**: 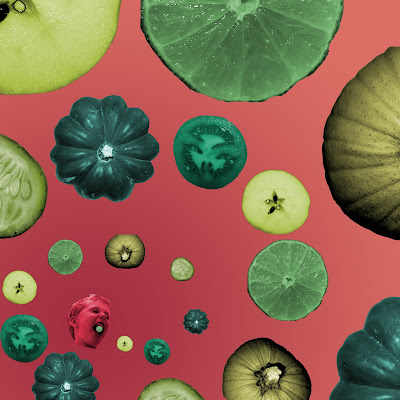 I am glad that we have about a week to complete these assignments. My brain doesn’t create the best designs on a short time frame. I need to get into the class, read the assignment, and then just let it sit and ferment in my brain for a few days. If anyone has ever made beer, this will make more sense. After an initial fermentation, you rack the liquid (transfer it to another container to remove sediments and jump start the fermentation process) and let it sit some more. After my initial processing of ideas, I sit down and “rack” my ideas into a design. It usually isn’t that exciting–just like your imaginary beer or wine at the racking stage of the process. I let the ideas ferment (usually on bike rides, runs, or when I wake up in the morning) some more and come back to them at the bottling stage. Some more tweaking and changes occur, just like the process of moving my brew from carboy to bottle. Then I need to go away and come back later. My imaginary brew needs me to do the same. It sits and mellows. So does my design. The results end much better at the end of this long process than when they were a jumble of ingredients. Enjoy my latest homebrew. It is posted above.Part of my problem in the early fermentation stage is the Internet. In this assignment, we had to find six items with a radial balance. Sounds easy. But when I do a search in Google, like for “bicycle wheel image”, and then 100s of search pages appear, I start to hyperventilate. I just don’t have the patience to sift throught them all and find what I truly want. I find it much easier to make my own images, from my own life, and work from there. So I photographed six different fruits and vegetables with radial balance on a white background (making it easier to cut them out in Photoshop later). I loaded these into Photoshop and began altering them. First I changed them to black and white by switching from RGB color mode to Grayscale. Then I messed with the contrast and brightness. Once I had an image I liked I cut the fruit or veg from the background and pasted it into a new document. Here I switched back to RGB color mode and created a new layer in which I selected the image, airbrushed a green color over the image, and then selected overlay so the color and black and white image below merged. I did the same thing with my son’s head.

Then I created the master document and began to copy and paste the images. First, I created a layout by creating a gradient layer with the red color. I put the darkest color in the lower left corner, creating the radial focus point of the design. The color fades out from here, empahsizing the design’s radial direction. My son’s head went over the focal point, and I began to arrange the food in a spiral pattern from his mouth, resizing the images to get larger the farther they got from his mouth.

I hope you’ve enjoyed this brew. It has left me mellow and hungry for some squash.

—————————————
**I’m the kind of sick this week where I have to wince, cringe, groan, and clench my fists every time I swallow. My tonsils have a lifelong history of kicking all other tonsils’ asses when it comes to swelling and pain. When I’m sick like this, and the docs tell me to open my mouth and say “ahhhh,” they generally jump back and hold themselves for a minute before gasping out, “Well. Now. That’s impressive.” At any rate, that’s why I didn’t have a whole lot of sass to pour into this post. Since I literally can’t talk right now, Groom’s words have pitched in.

24 responses to “Decapitating the Child”