Back in the 1980s, I did the college gig all traditional-like. Squirming and chafing in Montana, I hit eighteen and began the countdown to flight. When the time came to start college, I viewed the 1,000 miles separating my new campus and my hometown as “a headstart on a life where I don’t work in a bowling alley.”

1,000 miles away from my high school, I learned to wear scarves and listen to REM and dance to Soul Asylum and subsist on the salad bar and listen to convocations featuring distinguished speakers like that old curmudgeon Garrison Keiller and stalk physics study group sessions in the hope that the word “torque” would ever mean more to me than being the last name of a member of the 1960’s faux-musical group The Monkees (Peter Tork) and attend a production of Sam Shepard’s True West and climb the water tower about an hour after putting the keg’s tap directly into my mouth and,

I think you get the picture.

So I have that experience in my life that represents “college.”

However, now I teach at a community college, which often feels more like a move of social justice than a career choice.

Because, you know, there are reasons why students are attending the community college. Certainly, there’s convenience; there’s affordability; there’s the personal touch. Additionally, though, students often find that the community college is a place to go after–or while in the midst of–personal crisis: divorce, job loss, rape, rehab, mental illness. Our students, in short, aren’t living their educations. They are tucking their educations in and around their lives, flitting to campus for class and then booking away again the minute the Anatomy & Physiology lab is done, tearing to daycare to pick up the twins.

Thus, community colleges often lack the traditional “college culture.” They are commuter campuses, by and large, so our students miss out on the experience of checking their mail for care packages from home or riffling through their roommate’s drawers while she’s at Abnormal Psych, looking for weepy journals, sex toys, dime bags, packages of Pork Ramen. They pop in to “learn” and jet away to “live.” Rarely is there a marriage of the two.

All of this explains why I so love the end-of-term student art show on our campus. For three quick days, the place almost feels like–has the vibe of–a college. When the art show is hung, I feel like shouting to the students, “If you think this is good, you should know places exist where professors take you outside for class in the Spring, and you all sit and lean against trees–YES, there are trees!–and talk about Kierkegaard. And sometimes after class you go play frisbee, and after that someone will play a guitar and sing Cat Stevens off-key. During all of this, you feel more comfortable than you ever have before and simultaneously kind of queerly alone–yet certain that your life will never be more vivid. This, dear community college students, is what you should extrapolate from the art show. Scurry now. Do that. Extrapolate.” (then, being where we are, I define “extrapolate”)

This semester, the art show was particularly fun because Groomeo has been cashing in on my free credits and taking some art classes, so his work was displayed, too, AND he got to pour glasses of Pepsi at the opening night reception. Me? I got to skip around and clap my happy hands in front of any piece signed “Jocelyn’s Husband.” 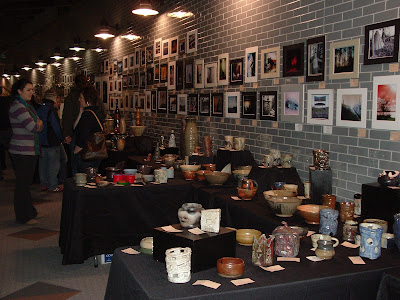 I also got to warm up my snarky sotto voce comments for the dreck that festooned the place. As it turns out, I possess happy hands and sotto voce comments in equal measure, so I went skipping and bitching and mocking and twirling until I was finally forced to collapse back at Groom’s Pepsi table and order a double.

Much revived by the carbonation, I headed back out to witness more of “the learning curve made incarnate” that decorated the walls and tables. Of course, personally, my best artistic abilities involve stick figures, sock monkeys, and my own urine, so I couldn’t be too condescending. 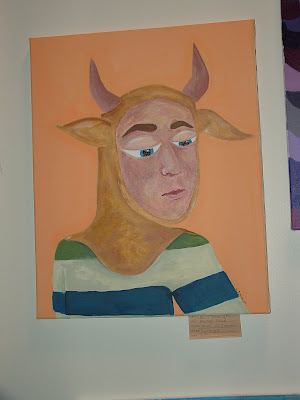 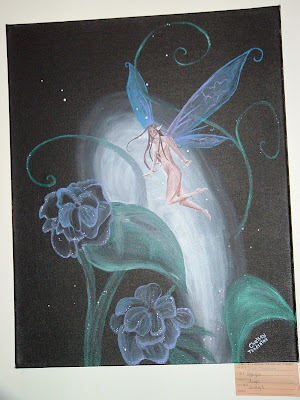 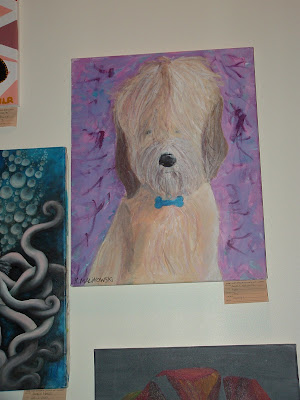 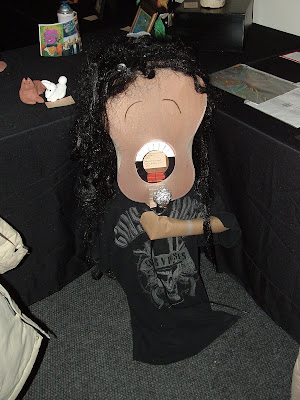 And I haven’t even included photos of the myriad works featuring Tinkerbells or clay seals playing basketball.

What I learned from my art trolling with the kids was this: five-year-old boys rewy, rewy think paintings of Captain Hook and cigarette-smoking chimpanzees wearing visors are soooooooo cool. I also learned that my husband does a damn good job–so good, even, that when his first assignment in Drawing class this term was to create something on a scratchboard, as a way of learning technique, and the teacher recommended animals as a good subject for this medium, he was able make that untenable assignment sing. Initially, when he came home from class and told me that there might be kitties involved, I recoiled and gasped out, “You mean…create an animal? Like, on purpose? Must you?” Cringing right along with me, Groom said, “Well, textured subjects work well on scratchboard; there’s no way to erase, and there’s nothing but black and white, and so fluff translates well. But never fear: I’m going to think on it.”

For one wild day, he considered doing a picture of a dandelion gone to seed. I was able to get behind him on that notion. I knew the alternative.

But then he decided to listen to his teacher and take this basic assignment and do, yup, something basic. He announced he was going to scratch out a sheep.

Greeting his declaration with more than a minute of silence, I eventually left the room to re-group before returning, resolved, able to tell him my love would withstand this one test, but if he ever painted a unicorn, it would be over, and he’d need to be out by Monday.

Crikey, though, look what he did with the Baa-Baa: 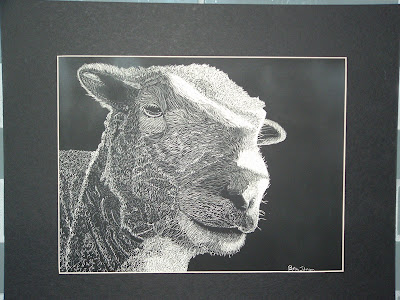 Dude made my jaw drop at a sheep’s head. Previously, the closest I had come to this was dropping my trousers in the loo at a pub called The Boar’s Head. 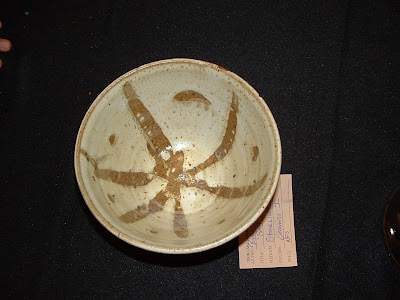 With this bowl he threw in Ceramics class, my years of muttering about “this pain-in-the-arse piece-of-crap-we-serve-beets-in” came to an end. 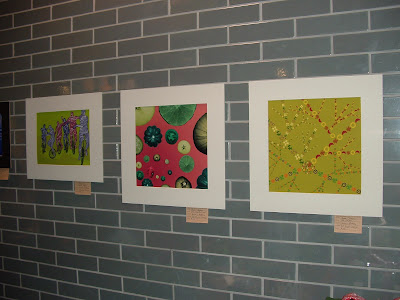 This wall displays three of his 2-D digital designs, one for movement (him on a unicycle), one for radial balance, and one for rhythm. Maybe you all should send me gifts now, so I can send you a little thank-you card, featuring one of these on the front. I like books, espresso, and dangly earrings. 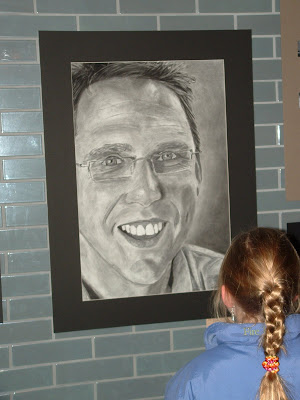 Here’s Girl, viewing her pappy’s self-portrait. The instructor took his photo, off of which this drawing was based, on a particularly greasy-headed hat-hair day, which means I now get to tell him all the time that he has a seriously ginormous forehead. I’m tempted to get him all steamed up and fry an egg on it. 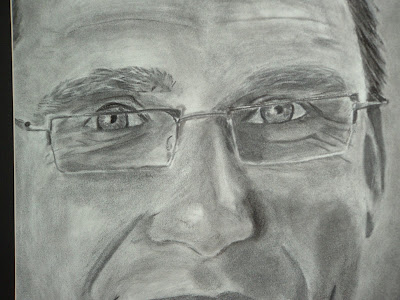 Cutting in closer to that portrait, I find my happy clapping hands coming out again.

I mean, look. He’s just nice (…even though I’m not quite sure where his eyelashes went; did they never grow back after the bacon grease fire of 2005?).

Seventeen years ago, His Groomishness graduated from a pricey place that offered up the traditional campus experience. Now he’s mixing it up a little and making me all shivery.

Indeed. Every night, I get to hop into bed with those peepers–those kind eyes that have staked out residual territory just below the ginormous forehead of a community college student.

art show, college students, crap, Groom, where do you hang that stuff after the show?