And He Hasn’t Even Heard Ethel Merman Yet

Generally, unless our orange-jumpsuited kids are off using pikes to stab at garbage in highway ditches, we don’t turn on the tv during the daytime hours. Really, there’s just dummm stuff on all day, and their little developing brains need to be applying themselves to more important work than watching Thomas the Tank Engine, work like learning to use the espresso machine to make Mama a mocha. So the screen remains dark until dark.

Or longer. Than until dark.

Which I know makes no sense, but I wanted to see your brain swell up and then pop as you try to parse it out.

This last week and a half, however, what with having a really big, really tragic invalid in the house, the tv has been on a lot, at all hours. And since Groom is nothing if not an over-educated white liberal, his viewing habits revolve around the PBS line-up.

What an awakening this has caused in Paco, the Wee Niblet, who has often been glued to Pappy’s side, there in the bed, in front of the tv (Girl, never much attracted to moving images, retires to The Reading Corner in her room, where she pours over Volume 221 of The Babysitters’ Club and twirls the end of her braid absentmindedly as she gasps over the trauma of Dawn moving back to California when clearly all her friends still need her there in Connecticut!!!!!).

But Niblet? Has been transported.

He nevewww knew before that the waves bouncing through the air from the television could contain such stuff. He nevewww knew that people actually used hot glue guns on real shows and not just at our kitchen table; he nevewww knew how fast onions could be chopped; he nevewww knew that some people find junk in their attics and bring it to a special place and find out that it’s worth $50,000, which is, like, enough to buy even the Millenium Falcon Lego set.

In particular, Paco has gotten excited about

America’s Test Kitchen (“Dad! Dad! That guy with the glasses and the bow tie who seems kind of cranky is on! Come on! Dad! You’re missing it! They’re taste-testing ketchups!”),

the understated charm of Bob Ross (“He was painting, and he talked vewwy quietly, and then–suddenly, out of nowhere–there was a waterfall. A waterfall! I’m not kidding. How did he do that?”),

and Antiques Road Show (I came in the other night to find Niblet in full recline across his pops’ legs as a Tiffany lamp was being examined on the screen; he only stirred to say, “Mom, I love everything on this show. First they had a Native-American pemmican pouch. Then they looked at a hutchie thing with lots of wood–and it opened and had a latch and was from before Little House on the Prairie times. And now they have this glowing thing, which is made from beautiful and shiny stained glass. Can you even believe that some people get to own a lamp like that?”)

It’s not for nothing, of course, that I sometimes refer to him as My Fine Gay Son.

What could be more fun than a Fine Gay Son, I ask you? (okay, we could make a pretty srong argument here for a third-grade girl who twirls the end of her braid while bent over a book, but she’s in the other room right now, so let’s give her some peace)

Not only does a Fine Gay Son love him some PBS, but he also needs help painting on “rainbow fingernails with lots of glitter” and getting into a little pink gymnastics leotard, something that shows off his itty Boy Package to great effect.

Even better, some days when I come home from work, he takes one look at me and points out, covetously, “Mom, that shirt looks silky. I like that shirt.”

When I ask, “Do you need to wear it for awhile?”, he responds with “Let me just get nudie first; I need to feel the silky on my chest.” Then, trying not to over-step, looking a little nervous, he asks, “And can I try on some of your boots now?”

Twenty minutes of shoes later, and he’s dancing, twirling, glorying in silkitude and bootdom and textures and heels that click. 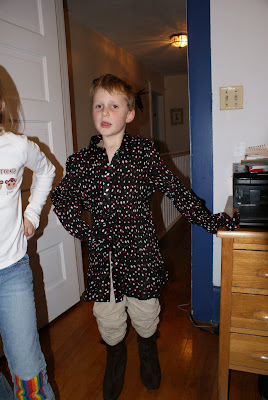 On the sidelines, I, the doting mother, just want to squeeze him up, as I envision his future on the stage, perhaps–if I’m really lucky–as a drag queen.

Yum. Aging stage mother of a drag queen. Suddenly, everything clicks into place. Sure, to complete the image, I’ll need to take up chain-smoking. Plus, I’ll need a wig. And maybe a few polyester pantsuits. I envision myself as a cross between Carol Channing, Shelly Winters (in her later years), and Lucille Ball (post-post-post Desi).

There I’ll be, in a dark corner of the venue, inhaling deeply, taking a swig of my highball, and then exhaling in admiration at my son as he presents his spangled interpretation of “When Sunny Gets Blue.”

As I fluff my wig with manicured claws, I’ll silently thank Bob Ross, Christopher Kimball, and the antiquarians on the road show for opening up his world.

I’ll also cackle a little, before breaking into an extended coughing fit, at the fact that he not only has devoted parents in the audience,

but he also has a manager he can trust. When he bombs, and the crowd yells, “Give him the hook,”

The Manager, backstage, will stop twirling the end of her braid and set down her book

just long enough to usher him to the safety of his dressing room. 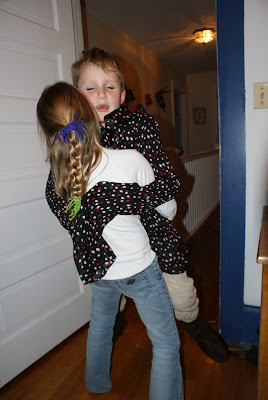