Shouldn’t I Get An ‘A’ Just for Enrolling?

Every semester, I am asked by students–with increasing frequency as the term chugs along–if I have any extra credit activities for them.

When they ask this, it’s very hard for me not to start the hollerin’.

Here’s what I have discovered over the years:

1) the students who will actually complete and submit the extra credit activity are those who are already earning an “A”;

2) coming up with, answering questions about, and grading an extra credit activity will require more time on my part than the sum total of all the students’ efforts;

3) I find the idea of “extra credit” in college to be antithetical to everything the place is supposed to be about (exercising personal choice and motivation to apply oneself to attaining the gem that is higher education–not that I did this myself so much during my time at The Ivory Tower, but at least I accepted the basic premise and placed no blame on anyone but Chuck Woolery and his damned unfailing charisma when I was unable to attend class due to an all-consuming need to watch “Love Connection” instead of attending my 18th Century Novels class).

Of course, realistically, I know college, particularly for many community college students, is often fueled by the sentiment of “I didn’t have anything else going on, so I came here for awhile”–and I mean this in both the “…so that’s why I’m going for my A.A. degree” and the “…so that’s why I came to your class today” ways–than a diligent tread toward knowledge.

But still. Extra credit in college grates on me. I have, thus, developed a little speech over the years that I toss into the faces of those unsuspecting students who wander up to the lecturn after class and ask, with bewildering innocence, “I know I didn’t come to class for about eight weeks, and I didn’t turn in two of the four papers, and I know the semester ends in two days, but what I really want to know is if you offer any extra credit because I really, really need this class to graduate, and so I’d like to pull my ‘F’ up to a ‘B’ by Friday. How can we make that happen?”

Surprisingly, my speech of response does not start with the words, “I swear I could shake you silly right now, Gomer.” Rather, I give Wide-Eyed Absentee a few pat sentences about how the successful college career is built upon a premise of thoughtful work turned in consistently, on the date it is due.

Then, only in my head and never, not ever, in real life (except one time with a frat boy named Calvin who was drunk anyways), I slap their porcelain cheeks ’til blood flows into their Trapper Keepers.

At least, for more than a decade, the Extra Credit minuet played out in this way, semester after semester. They bowed; I curtsied; they dipped; I beheaded.

Finally, though, a few years ago, I caved.

In such fashion, the “Extra Credit for Wearing Kleenex Boxes on Your Feet When You Come to Class” assignment was born.

As random as this seems, the idea does grow–extremely tangentially–out of some classroom material. See, the first paper of the semester is a Division/Classification essay, in which students are asked to examine “types of something” or “parts of something.” They get to choose their own topic, and then they need to come up with an “organizing principle” from which they then define their categories or components. To get things started, I do a little example up on the projector: 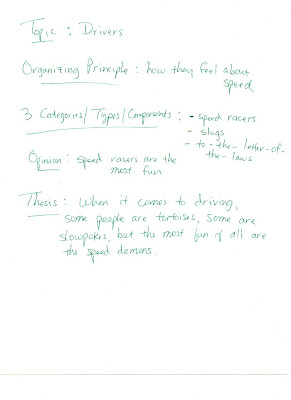 First, I show them a possible topic; then I express the organizing principle, come up with three types of drivers based on that principle, and, with a flourish and a spin, finish by tossing out a thesis for them. 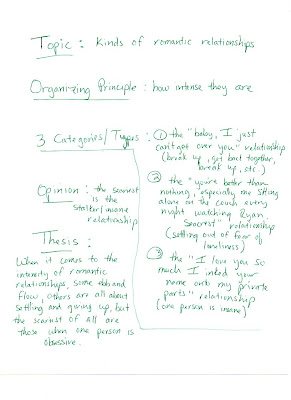 Just in case the first example didn’t stick, I give them another. (sidenote: they like this topic quite a bit, as, all too often, it ties into their own lives; invariably, there are knowing glances exchanged in the third row when I read aloud the various types of dysfunctional romances. This semester, one female student even put her head in her hands and muttered, “Oh, Kevin. You were so wrong for me.”)

Of course, two examples rarely do the trick. A third, more-official breakdown of the assignment caps things off. Actually handing them a copy to take home and not just presuming they’ve copied my examples off the projector, I can feel assured that they have the information firmly tucked away…someplace, in some folder, somewhere (“maybe it’s under my bed?”) where they’ll never find it again or reference it when writing their own essay. But I have xeroxed; I have tried. 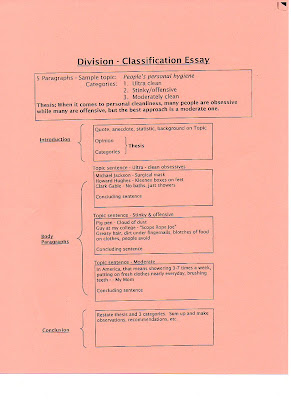 It is out of this printed example that the Kleenex Box Assignment grew. First, I explain the introduction and placement of the thesis, and then I launch into the body paragraphs and how to provide specific examples to back up each point. For the case of “obsessive wack-jobs” in terms of bodily perceptions, I trot out the fabled, perhaps apocryphal, example of Howard Hughes in his later years, when, lost in lunacy, reluctant to be dirtied by the touch of others, feeling it was cleaner for his person to remain untouched, he refused to cut his hair, fingernails…and toenails.

Naturally, if one doesn’t cut one’s toenails for years and years, and they extend for two inches or more,

one might need to get creative about footwear, right?

One might, in fact, need the wide open spaces offered by forgiving Kleenex boxes, right? You feel me?

From thence it came, my sole extra credit assignment: Before the end of the semester, if you come shuffling into class wearing Kleenex boxes on your feet a la Howard Hughes, I will give you five points.

A startling number of students come sliding into the classroom on final exam day, hoping those five points will compensate for a 500 point deficit. For those who protest their feet are too big, I direct them to the open-toed sandal box option. A few years ago, one particularly creative lass not only had the boxes on her feet, but she also made herself a dress out of all the tissues. She looked like Tinkerbell on acid, and it delighted me no end.

Thus, every semester, as desperate Kleenex box wearers sit for two hours and type their final exams, hoping that five extra points might hike their grade up to passing, I kick back,

and blow my nose with great gusto.

college cushions, extra credit, Kleenex boxes, the “dance for me, tiny dancer” perk of having students

20 responses to “Shouldn’t I Get An ‘A’ Just for Enrolling?”