“(Mis)Adventures for Pyramid Man and For You, Too, Gentle Reader

Many commenters on my previous Pyramid Man post were correct that “Pyramid Man” was inspired by the They Might Be Giants song “Particle Man.” When Groom started playing around with the idea of the Adventures of Triangle Man, however, he quickly realized that a triangle is hard to confound, as it can just turn sideways and slide through most any situation. Once a triangle becomes multi-dimensional, that’s when things get sticky.

And more interesting. Misadaventurous, if you will. Thus, Pyramid Man was born.

In recent days, Paco has decided that Pyramid Man must always have a door on his belly, through which a bandage-hurling mummy can exit the building and wreak havoc. (As I type those last words, I realize how much I want to use them in the past tense, for I have a random but compelling desire to type “wrought havoc.” HEY, now I’ve just typed it, and as I continue this aside here, I realize the longer this tangent goes on, the more havoc I’m wreaking with this bit of writing overall, to the point where you might finish reading and be left thinking, “Wow, that post really wrought havoc with my will to live.”).

So, as I was noting before my wilting synapses wrought havoc with the direction of my thoughts, Pyramid Man sometimes may have a door in his tummy (which I believe is the correct Egyptian word for that part of a pyramid), and there might be a mummy, and any long strings you see in Pyramid Man ‘toons are the mummy’s bandages. Except, sometimes, long strings might also be x-ray vision at work. Paco has lots of ideas, and he really likes adding strings into his dad’s panels.

Adding strings into his dad’s panels? That sounds like a euphemism for something and as though it might express being really torked, like, “Remember when Margot was reaching onto the floor of the car, trying to find her sunglasses, and she crashed my canary-colored Corvette into the back wall of the zoo? That really put strings into my panels.”

Er, anyhoodle: Paco also thinks Pyramid Man is a bad guy who always should be carrying a bag on his back–you know, to hold the loot he’s just heisted.

Loot he’s just heisted? I’ll be tarred and feathered, but that sounds like another euphemism, kind of like “chaps my hide.” Imagine if Margot not only crashed through the back wall of the zoo in your Corvette but also killed a gorilla in the process. As you looked at the carnage with disgust, you’d be all, “That really heists my loot.”

Seriously, I’ll stop with the tangents now. Pyramid Man must make me giddy or something, kind of like when a Bob Mould song comes on the Itunes, and I have to crank it to seventy, and then I have to dance and sing a little and think back to how seeing him play at First Avenue back in the ’90s was the best show I ever went to, and not just because he was a punk god who was wearing a cardigan but also because I was with my best girlfriend and her date who was actually the live-in boyfriend of her boss–talk about grounds. for. dismissal. Yet somehow it was all good fun, and our eyes got shiny as we listened to Bob sing, and to this day I just want to build him a little house out back and make Bob some snickerdoodles.

Like, um, yea, so Paco says Pyramid Man always has to have a loot bag on his back (remember how Julia Child had that hump on her back, and it managed to be charming?).

I present to you, now, the latest Groom/Paco collaborations on the easel in our bathroom, which is actually a pretty nice room in our house, as it’s bigger than you’d expect and has both hard wood and tile on the floor, which gives users tactile options for their feet and, I suppose, for their hands, too, if they were to bend down and touch it with their fingers. But older people might find the bending down hard and should probably stick to feeling the flooring with their feet alone, lest they have to call for an assist.

What I mean to say is, here’s Pyramid Man: 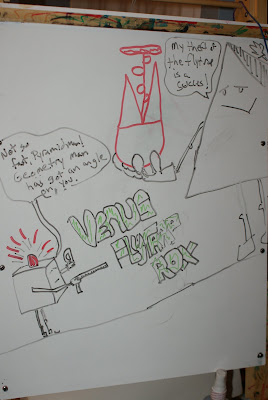 First, Paco drew the red plant in the middle of the frame and announced it was a Venus Flytrap. Groom built from there, depositing the flytrap into Pyramid Man’s hand and entitling this episode “Venus Flytrap Rox.” In this panel, Pyramid Man announces, “My theft of the flytrap is a success” (although Groom wrote it as “sucess,” which made me think, as I added another ‘c” to that word, “Honey, you may be cute, but leave the Englishing up to me and concentrate on drawing your little pictures and looking pretty”).

In response to Pyramid Man’s pronouncement of his theft, a new character, clearly a law enforcer (see the flashing light on his head?), shows up on the lefthand side and says, “Not so fast, Pyramid Man! Geometry Man has got an angle on you.”

And, punkies? Look: Geometry Man is holding a protractor as a weapon, and if that’s not the humor of a private liberal arts college graduate, I don’t know what is. Your parents’ hard-earned money was well spent on that killer tuition, Groom!

Of course, Paco insists there’s no such thing as a protractor, and it’s just a gun there in Geometry Man’s hand.

I fully expect to see Paco at the community college in 12 years’ time. 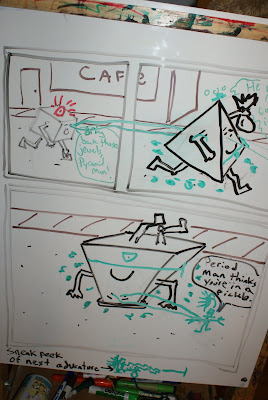 A few days later, Pyramid Man’s adventure continued. You can see, in these panels in green ink, Paco’s additions. Geometry Man yells, “Bring back those jewels, Pyramid Man” and then shoots at the culprit with x-ray heat vision. Pyramid Man then thinks, “He’ll never find me in the sewer.”

In the last panel, you can see what happens when a pyramid tries to jump through a manhole. Essentially, he becomes Plug Man.

Finishing out this story is the appearance of a new character, which Paco added. Check this out, though: my six-year-old named his new character Period Man because he’s a piece of punctuation, and when he told me that, I hugged him so hard and with such jubilation that his eyes popped out. We picked them up off the bathroom floor, though (one eye was on the hard wood part, and the other eye was on the tile), and stuck them back into his sockets, which was fortunate, as he then could read the caption of “Period Man thinks you’re in a pickle.”

At the very bottom, there’s a line about a sneak peak at the next adventure. All I know so far is that it involves the x-ray heat vision melting a lot of things into puddles of goo. Beyond that, I just step aside and hand over the marker.

Whew. Despite the fact that I merely posted a couple Pyramid Man adventures, that sure wore me out. And now I’m dwelling on the word “manhole” and am really afraid of the tangent that I’m about to go off on,

before I type the word

12 responses to ““(Mis)Adventures for Pyramid Man and For You, Too, Gentle Reader”