Nothing Can to Nothing Fall (Part I of III)

Even as it was happening, I didn’t realize we were breaking up.

This time, I missed it because I was too busy cataloguing evidence that we were “together.”

Certainly, I had acted the part. I drove once, twice, each week the two hours to his place. Once there, I shared his bed, made meals, answered his phone, painted his house. I was energetically—unrelentingly—devoted to providing what I perceived he wanted.

Certainly, I had been crazy for him, and if he’d suddenly blurted out, “Let’s get married,” my answer would have been a rushed and hearty “YES!” I would have been planning how to stuff Siberian Iris into every centerpiece before he’d had the thought to learn my middle name.

Curious, then, that I was never completely certain of where I stood…or if I was even welcome to stack up each of my vertebra into the tower of my full self. A posture of anticipative crouching typified those six months.

Easy psychology might conjecture that I hunched into the crouch after my previous six-year relationship with a man who had never wanted what I wanted, with a man who rarely made me feel prized or desired, with a man so wounded that I finally had to refuse to be his healer, lest I start dropping limbs myself. It could have been posited that the remnant damage from that relationship of my twenties—a mere nine months behind me when I launched into Hope with this new man—readied me for New Man’s confounding treatment, an approach that careened from blood-rushing attentiveness to perplexing inscrutability.

Of course, the workings of the psyche are never easy.

In truth, ending the relationship of my twenties ultimately felt right and good, like a release from middle school lunch hour—something I craved for the opportunities but, more deeply, mourned for the daily disappointments. Once the redheaded man and I had parted ways, I had turned my face, beaming, towards the future; I was both unfettered and gleeful. Within months of his moving away, I’d retrieved cached pieces of self, lost 40 pounds, reinvigorated friendships, found a new recipe for cashew chicken, gone bowling, seen movies requiring Deep Thought, shopped for new sweaters, and planned a summer trip to Ireland with several Women of My Heart.

Then again, there was also the loneliness. Without the definition of a relationship, life seemed aimless, without purpose or momentum. So, what?—I was to get up every day, eat some Raisin Bran, and—then what?—try to figure out where in the world Matt Lauer was? And I was to repeat this ritual until when? And why was I doing any of it anyhow? At least in a relationship, the yoke to Other nudged me when it was time to turn back to the barn at the end of the day.

Unyoked from my former love, I felt free to sprint across a sun-dappled meadow, yet part of me wondered if I weren’t also dashing toward the edge of a long, flat world, galloping into a pre-Columbian void of darkness.

Caught between dapple and dark, I engaged in a deliberate Creation of Meaning for my days, no simple feat in a town of 23,000 people, two-thirds of whom were over the age of 65. Mostly, Meaning Creation entailed fine-tuning my personal profile, trying out activities that might ripen me for presentation to A Different Kind of Man: A New Man. In this quest, I rented inline skates; I made a pair of snowshoes; I cooked a cauliflower pie in a hash brown crust. Each of these—undertaken solo–filled hours and gave me material for conversation.

And that’s what loneliness is: deliberately filling the hours, warding off potential silence in the face of a welcome inquiry.

After being single for a handful of months, recovering from the six-year relationship, listening to countless hours of books on tape while walking paved paths that encircled ponds, shooing the geese when they waddled up to hiss and peck at my feet, some friends came to visit.

I didn’t realize at the time that they were on a reconnaissance mission, that they were checking the walls of my house to be sure I’d removed all pictures of Redheaded Long-Term Man before beginning to orchestrate a series of “introductions” to the single men in their lives.

Apparently, I passed their covert tests and, subsequently, began to get invitations to come visit them in their city. And so long as I was there, I was welcome to accompany them to whatever they were doing that weekend–even and especially if it involved opportunities for me to stand in the same room with single men. This I realized only after the fact, as seems to be the case with most anything that might potentially change my life.

The second guy noticed me in the room with him, registered that I was single, and found me appealing. Oblivious, I asked him a lot of questions about his previous girlfriend and counseled him as to how to get back together with her.

The third guy was hosting a dinner party, so I was one of many in the room; he was making a Thai meal from scratch, showcasing skills he’d picked up in the Peace Corps. While he was convivial, he also spent three hours sweating over the food. Most of that time saw him sitting upon a wooden construction he’d hammered together, a little wooden bench called “The Rabbit.” The purpose of The Rabbit was to allow the sitter to shred, pummel, and juice a whole coconut until it yielded enough coconut milk for the meal. Terrifically hungry by 9 p.m., I still grasped these points: there was actually very little food put out on the table for all that effort; my idea of a dinner party involves more than 2 ounces of food per guest; I was going to need a burger on the way home; sometimes it’s okay to take the shortcut called cracking open a can of coconut milk, particularly if doing so allows you to talk to the people who have come to your home; and, finally, at least the host had enjoyed a vigorous and gratifying date with The Rabbit. 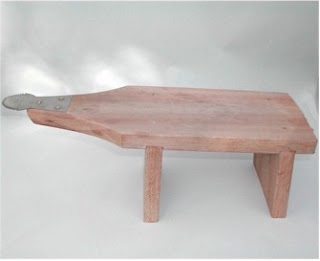 The fourth guy was jokingly called a Norwegian Bachelor Farmer, for he was tall, lanky, laconic, nearly 43, never married. I met him at a ski weekend at a friend’s cabin in Wisconsin—the type of weekend for which my parched soul had been thirsting: there were people, food, talk, laughter. Because I had no notion that my participation in the weekend was actually an audition for affection, I was relaxed and easy. Beneath the joking around, though, some part of me observed that The Bachelor was charming in his quiet way; some part of me discerned that a place in his affections would also grant me continued access to this group of friends. He was a package deal.

Thus, a squeal escaped my lips a few days after the cabin weekend when I opened my email to find a message from him. True to his form, there were few words, simply a brief “I believe I’m smitten.”

Reading those words still qualifies as one of the most heart-poundingly-satisfying moments of my life. I checked quickly over my shoulder to see if a television camera hovered there, recording my reaction as part of that week’s episode of The Jocelyn Chronicles, an episode entitled “Life: There’s Payoff After All.” Unfortunately, all I spotted was a withered house plant, its own parched self crying out for a little attention.

I replied to that email with excitement only loosely harnessed. Fairly quickly, we arranged an actual date, and when we shared asparagus off the same plate during that meeting, I was further convinced of our potential.

He also tempered the residual backlash from Redhaired Man of My Twenties. Still reacting to that previous relationship, I saw The Bachelor satisfying my desire to have children, for he felt his own clock ticking and was more than ready for fatherhood. We wanted the same things. We liked each other. What more did there need to be?

Naturally, The Bachelor had dated before me. One of his ex-girlfriends was part of the “cabin weekend” group. She and The Bachelor seemed fine friends, which spoke well of his character, I thought. Later, I did hear that, after he had broken up with her, she had not participated in the “friend weekends” for quite some time, absenting herself for a few years. He had also brought an unfortunate woman to one of the cabin weekends; she was quickly tagged with the name La Nerviosa due to her evident feelings of unrest, anxiety, and confusion throughout the weekend. The rest of the cabin group was taken aback by her questions about why The Bachelor seemed to distance himself from her presence; they were incredulous that she cried; they still told stories of how La Nerviosa, after that cabin weekend, followed The Bachelor around plaintively, unable to make sense of what was going on between them.

Chortling at the “craziness” of La Nerviosa is one of my greatest regrets.

It would take ten months for me to be rendered La Segunda Nerviosa.