Forgive the Lack of Originality, But One Feels Compelled to Toss Out the Title of ‘Ice, Ice, Baby’

“Forgive the Lack of Originality, But One Feels Compelled to Toss Out the Title of ‘Ice, Ice, Baby’”

There is no clearer evidence that Groom and I are adrift in a new place, casting about for moorings, than the fact that we’ve become The World’s Cheapest Dates. Seriously, it takes nothing to delight us.

Case in point: we are tickled-Ottoman by the way many Turks–if they have any desire to do so–make ice. For the most part, ice isn’t seen, isn’t done, isn’t a thing. If a drink is “cold,” it’s been refrigerated. The idea of “take that cold and up it a tidge, please, ’til my teeth hurt” is purely a foreign, Western, touristic concept.

For business owners whose livelihood depends on making foreigners’ wallets pry open, ice, then, is a thing. And, well, yes, reusable ice trays do exist. I saw them in a shop last week. Mind you, I’ve been in 73 shops in the last few weeks. Apparently, though, the preferred method of Those Who Need to Make Ice is

For sale, in many stores, is a box of ice bags, wherein small bits of each are sectioned off to make the cubes.

Once I’d heard about this method, I told His Groomishness, “I know this is one of those things that is crazily impractical, and it will make you nuts to even think we paid out money for, but, Toots, I’m charmed by the notion. So if you see these bags, grab a box, will ya?”

Even better: he was the one to make the cubes.

Even, even better: making the cubes was the best time he’d had since ingesting his first Efes Pilsen a few weeks before. He opened the box. Chuckled. Chortled. Whirled like a dervish. Filled the bags, one compartment at a time, sealing the whole thing off with an optimistic, “Freeze up now, My Lovelies!”

The next day, with no work, school, friends, or schedule to disrupt our thinking, we opened the freezer carefully. Yes. Yes.

As you might imagine, we’re now faking heat exhaustion and spritzing our torsos with mock sweat in private, just to make the case for Ice Need.

Because then we get to dive into the freezer, take out the bag of smooth eggs, and tear them out of the plastic…

thus proving that, in a time when we don’t speak the language, when we have virtually nothing to give us direction, it all comes down to the odd Holy Moment,

and looking forward, in the near future, to doing some cracking with a friend. 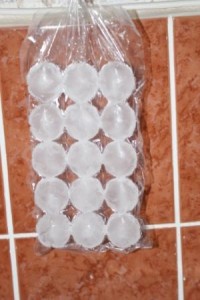 How to say, “on the rocks” in Turkish?

it’s the little things, won’t you come have a gin and tonic?

16 responses to “Forgive the Lack of Originality, But One Feels Compelled to Toss Out the Title of ‘Ice, Ice, Baby’”