A Message for the White People 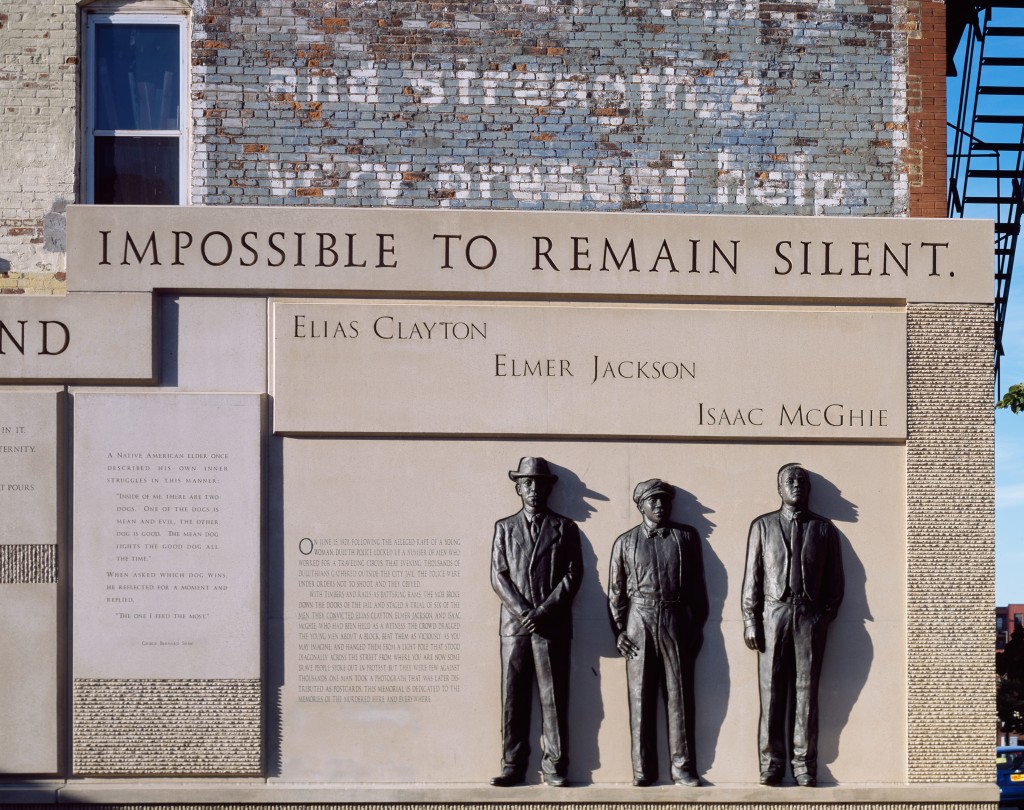 The teens found a photo of their classmate and made some changes to it.

The classmate is a young black man.

They drew a noose around his neck and added the words “Gotta hang ‘em all” and shared the edited photo on social media.

When this story hit the news in Duluth, Minnesota, last week, our city of 86,000 reeled. The act itself was hateful—but for it to happen in a city that is still coming to terms with the day in 1920 when six black circus workers were wrongly accused of raping a white girl, a day when a mob lynched three of those innocent men on a corner downtown, well, it made people wince. In an effort to acknowledge that terrible day, to publicly commemorate the city’s darkest moment, a memorial was erected on that corner in 2003. Since then, citizens have been able to point to the memorial with a feeling of “That’s how it was. But never again. We aren’t like that now.”

Heartbreakingly, as the altered photo of a high school boy demonstrates, that’s not how it was. From fraternity members at the University of Oklahoma using a racist chant to the police shootings of unarmed black men, we are like that now.

In response to the photo circulating on social media, the school district issued a statement that it was “taking appropriate action.”

Is there such a thing? Can any action in response to this bald, awful hatred be considered appropriate? Shock, maybe. Tears. Nausea. Anger. But those are reactions, not actions. Those are emotional responses to something horrible; in contrast, action implies intent, reason, forward movement.

So the school district will take action by applying policy. Consequences are one way to effect change. However, because what happened in our small city last week grew out of matters of the heart and mind—because racism is an infinitely human problem—we also need to engage in grassroots, person-to-person education. Particularly with our children, we need to convey our values not just through policy and not simply through parental example. We need to talk to them, explicitly and clearly.

To be honest, I hadn’t fully realized how necessary such talks are before last week when our good friends, Anne and Jenna*, sent out a plea from their family to their larger community. Anne and Jenna have been together for more than fifteen years, having moved from dating to falling in love to a commitment ceremony to a legal marriage a few years ago, when the state of Minnesota changed its laws. During the course of their relationship, they have bought houses, taken trips, become godmothers to my kids, changed careers, and adopted two children of their own. While Anne and Jenna are white, their ten-year-old son, Robbie, is black. The birth mother of their daughter, four-year-old Sadie, is Native-American.

Due to the realities of their family, these beloved friends have to wade through the world very deliberately. While all parents want to raise their children to greet life with open hearts, Robbie and Sadie—and all children of color in the United States—also have to learn to live defensively.

Spurred on by the altered photo of the boy (at the high school where Anne teaches), Jenna sent out the following message—a call for action:

I am sending this email to you because we care about you and your family, and we hope that feeling is mutual on some level. Know that as I write this, I don’t mean to offend or presume (tho’ to be honest I am getting beyond caring about that because this is too too important.). My request: please teach or talk to your kids about what it’s like for kids like ours to grow up in this world–what it’s like for kids of color to grow up in this world. In the United States, skin color does matter. You may feel or say that “I don’t see color.” But much of American society does.

Please teach them that we walk around stores now with Robbie and watch OTHER people stare at him and wonder if they are thinking he will do something wrong. Teach them that Robbie, at 10 years old, feels these stares too, and that shakes a person’s confidence and sense of self. Please talk to your kids about the fact that we teach Robbie he has to be MORE polite and MORE respectful than any of his white peers because he could get hurt, badly, if he’s not. Teach them that we talk to Robbie every few weeks about the police. Right now, Robbie doesn’t like police and he says “Police shoot black people.” At age 10, he knows this is unfair and unjust. Ten-year-old white kids don’t have to carry this burden; no child should. Please tell your kids that we teach Robbie not to wear his hoody and to act polite and happy even if he doesn’t feel that way.

Please talk to your kids about Native American history and the stereotypes of Indians. Teach your kids what white people in this country did with the boarding schools, almost destroying a culture and how those stereotypes are so prevalent still today.

Please teach your kids or help them recognize that while they don’t HAVE to think about any of this, many other kids have to deal with it every single day. What a privilege for white kids not to have to carry this burden.

Please know I am not being overly sensitive or trying to be overly dramatic. You may already have these conversations in your household and if so, thank you. If not, please do or call us or talk to us. We are doing our damnedest to make this world feel less difficult for our kiddos, but gosh would it be great to know there are other white kids, peers, friends that will stand by their sides and have our kids’ and other kids’ backs.

Beverly Tatum “Why Are All the Black Kids Sitting Together in the Cafeteria?”
Anton Treuer “Everything You Wanted to Know about Indians but Were
Afraid to Ask”
Peggy Macintosh https://www.isr.umich.edu/home/diversity/resources/white-privilege.pdf

*Names have been changed

**I did have a conversation with my fourteen-year-old about all of this last night. That’ll be in my next blog post.

8 responses to “A Message for the White People”