As the Catholic priest with multiple boyfriends can tell you:

However, despite evidence that the romantic ideal of meeting The One and living happily ever after is a crock, we are trained from birth to believe in it. Perhaps we’d do better to widen the scope of our relationship discourse, to make room for the legitimacy of bisexuality; fluid, changing sexuality; polyamory; extra-relationship affairs as a means of strengthening the relationship; asexuality. Perhaps we’d do better if we stopped trying to shape everyone with the same cutter.

I also think we would do well to put less weight on that ideal of “one relationship, for life, equals happiness.” Rather, Dan Savage‘s notion of relationships seems more pragmatic; quite simply, he asserts that “every relationship you are in will fail, until one doesn’t.” Somehow, that way of phrasing it eases the pressure to Arrive At One’s Destiny.

Even further, I appreciate thinking that redefines “successful” when it comes to relationships. “Successful” doesn’t mean sticking to each other until you’re dropped into a pit six-feet deep. “Successful” is a word that can be ascribed to any relationship, so long as you take something away from it when it’s over. Every failed relationship can be a success. For me, I dated a gay guy in high school, not that I knew he was gay until much later, and although I wished for so much more in terms of feeling desirable, I also gained great things from that relationship: I gained confidence, openness, the ability to look someone in the face and not crack when receiving bad news; I learned the power that comes from being stronger than expected. Just as importantly, I learned how to keep dancing all the way to the end of the extended six-minute remix of Soft Cell’s “Tainted Love.” Later in life, I had a taxing and joyful relationship with a troubled man; being with him taught me negotiation, self-protection, and how to appreciate my own zest and ease with regards to change and adventure. A bit after we broke up, I entered a relationship with someone who kept me in constant doubt–yet I also learned endurance and how to package my strengths and how necessary it is to listen to instincts. Beyond that break-up, I dated a quiet man, and from that relationship I became aware of my spark and convinced that zingy is as valuable as steady; as well, I got lessons in living without resentment and an ability to recognize how un-needy I actually am.

Each of those relationships, save for the last, played itself out. They failed. Ultimately, in terms of getting me to who and where I am today, they were extremely successful.

The last relationship, the one with the quiet man, continues not to fail. All predictors point towards us confounding everything I’ve just typed, in fact, as we continue to feel complete and satisfied within the confines of a monogamous commitment. A big part of why we’re so happy together is our agreement that what works for us needn’t work for everybody. Another big part of our mutual satisfaction is that we like each other better than anything.

It doesn’t hurt that he’s a good cook, and I’m a good eater.

Anyhow, I don’t entirely believe in the traditional romantic ideal, and yet I’m 100% living out the traditional romantic ideal–which grew out of thousands of years of patriarchy and out of the women’s movement of the 1970s. Men liked the idea of one man plus however many women he desired; women seeking equality then piped up and said, “We actually like the one man with one woman thing.” If nothing else, these frameworks help track parentage. For Byron and me, our traditional dynamic means we’re pretty sure both kids are his.

We had a particularly attractive milk delivery person about ten years ago, however. She was cute enough that Byron has just cause to suspect she may actually be the father.

Can I just say that any time I crack a stupid joke like that, I know Byron will enjoy it?

I also know he’ll enjoy my rants about people who refuse to be reflective.

Plus, he can’t stand a martyr, nor can I.

He’s down with a deep debriefing in the kitchen after social gatherings.

When I’m stewing and tangled inside, he’ll stroll into the room with a glass of scotch and say, “Here. You need this.”

He explains to Allegra the choices a scientist can make when designing her experiment. He can support the rationale of including cranberries and sunflowers, if the scientist thinks those are necessary materials.

He loves logistics. He loves maps. These are felicitous counterbalances to a partner who prefers a plunge followed by a freefall.

He teaches cooking classes at the local Co-op. They are so wildly successful that I cannot bemoan the lack of leftovers.

When I tell him I’ve created a situation in one of my online classes where I could really use an image of a four-armed Cyclops (long story), but I don’t want to deal with the copyright issues attendant to finding the necessary image online, he takes ten minutes to draw me what I need.

We are married. We are monogamous (although, in the last year alone, when I’ve spoken to others about the self-awareness of couples who choose open marriages because that feeds the needs of the involved individuals, I’ve received in return gasps and questions of, “So…is…that…something…you…and…Byron…???” OH, please. Simply because a person accepts something doesn’t mean she lives it. JEEEEEEBUS, JOANIE. I also think all drugs should be legalized. Does that mean I’m on heroin right now?). We prove that a good match on paper doesn’t necessarily deliver a good match in real life. On paper, his love of chickpeas and my love of the Arby’s drive-thru would never predict an easy compatibility.

We also prove that most long-term relationships are a matter of luck more than anything. As the years tick by, and various life circumstances come ’round, I am able to see new beauties in Byron–things I wouldn’t have even known to vet for when we were courting. Everything I thought I wanted when I was looking for a beau? Well, not much of it had anything to do with getting through daily life or periods of crisis with that person. The questions in my mind were more “Does he want children?” than “Will he actively seek ways for me to be away from the children so that I can be happier when with them?”

Moreover, when we were dating, I might have thought, “I’d like to be with someone who will go to the party with me when a friend turns 40.” As it turns out, I got that. Not that it matters; I’m perfectly capable of going to a party by myself, if I want to go, and he doesn’t.

I would not have known, back when I was on the look-out for love, to include a criterion that read, “The person you choose does not need to be able to play the guitar. However, if you one day have a child together who wants to play an instrument, say, saxophone, and he’s feeling kind of nervous about putting it up to his lips for the first time, this person you’re looking for should know enough to wander into the room and pick up a guitar and talk out loud, randomly, while trying to strum it. With Daddy doing this casual sidebar music, the nerves of the over-thinking child will be distracted and defused, thus allowing him to relax and squeeze a huge BWWWHAP noise out of his saxophone.” Nope, I wasn’t looking for that one at all when I was dating.

When I was dating around, I knew I didn’t care if the potential partner could dance, but I did care that I could go out and dance when and how I wanted. I knew that much. What I didn’t know how to test for, during the dating period, was a partner who could handle this situation: “If you ever get together and then have a daughter who becomes a middle schooler and who knows she’s not a natural at dancing, and one night you take her to a dance and notice her looking longingly at the participants from the sidelines, try to get her to dance with you. When she refuses–GAWD, DAD–go ahead and open the door on the dancing by grabbing a friend and hurling your terrible-dancing self out onto the floor, so as to show the middle schooler that having fun takes precedence over looking perfect. All the better if the friend you’ve grabbed to make this point is a guy.”

When I was out trolling the world for love, I was used to traveling and getting myself from place to place. Hence, it wouldn’t have been on my radar to want a partner who would one day be in charge of the guide book, who would love to plan our movements, who would want to think through the time tables. Little did I know, if I hooked up with someone like that, I’d be free to stand around and chat and laugh instead of squinting my eyes down real tight-like and trying to figure out which direction is north.

Without yet knowing everything about myself way back when, I couldn’t have known one day a Must Have for me would be this: when we go to a museum, and there’s a display of Roman jewelry, I’d like a partner who glances at it and says, “This stuff looks like you.” When, in response, I get all clappy and shout, “YES! I am nuts for every last thing in this case,” my best life partner should then take a few minutes to play the game called If There Were A Gift Shop Here That Had Replicas of Some of This Jewelry, Which Pieces Would Jocelyn Buy?

I had no idea how to look for that, back when I was dating, because I wasn’t yet aware I cared about Hellenistic fashion.

Really, there was no way our younger selves could have predicted that discussions of oils and jams would one day be fascinating and that we could serve as support staff to each other when deciding which small container would best fit into a suitcase. All I knew, when we were courting, was that I liked his hair.

When we head to the bowels of the earth,
when I’m feeling down, down, down,
he’s the one I want next to me. 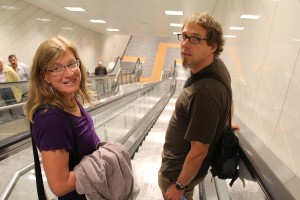 It delights me that he closes his eyes when I suck his face off. 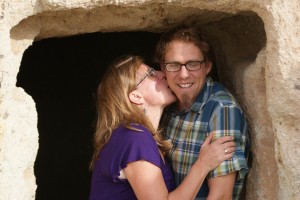 It delights me that his cheek is very soft, moreso when his eyes are closed. 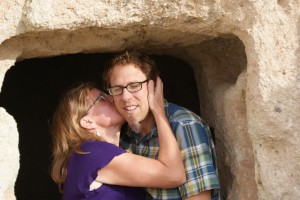 It delights me that everything ends with a laugh. 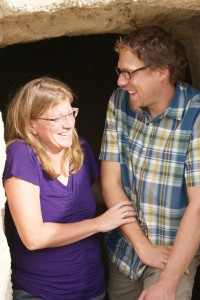 It delights me that somehow, without planning it, I stumbled into a life with someone who’s as big a cheeseball as I. 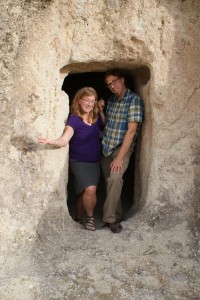 It delights me that I was fortunate enough to clod-hop my way into this relationship that is the one that didn’t fail.

Thirteen years after we married each other, thinking we knew each other–yet how could we know anything at all when nothing had happened to us yet?–we can only thank luck, affection, and jollity for carrying us through. 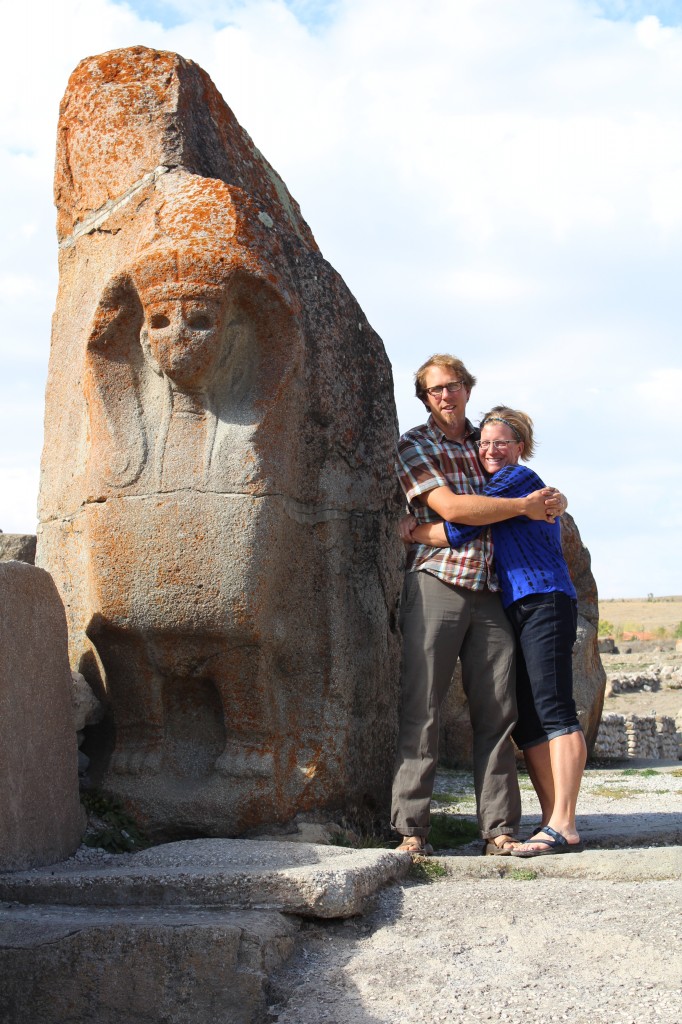 A shared enthusiasm for dark beer hasn’t hindered our sustained devotion, either.

We plan to crack a few tonight on this, our anniversary,

and raise our glasses

in all its many forms.