Someone had a very good morning. 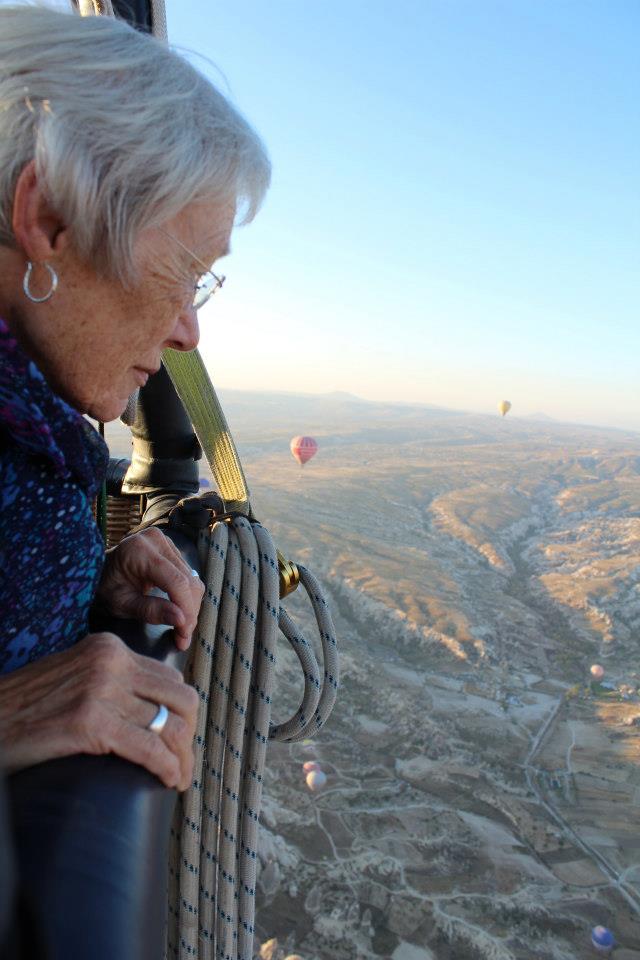 How could she not? 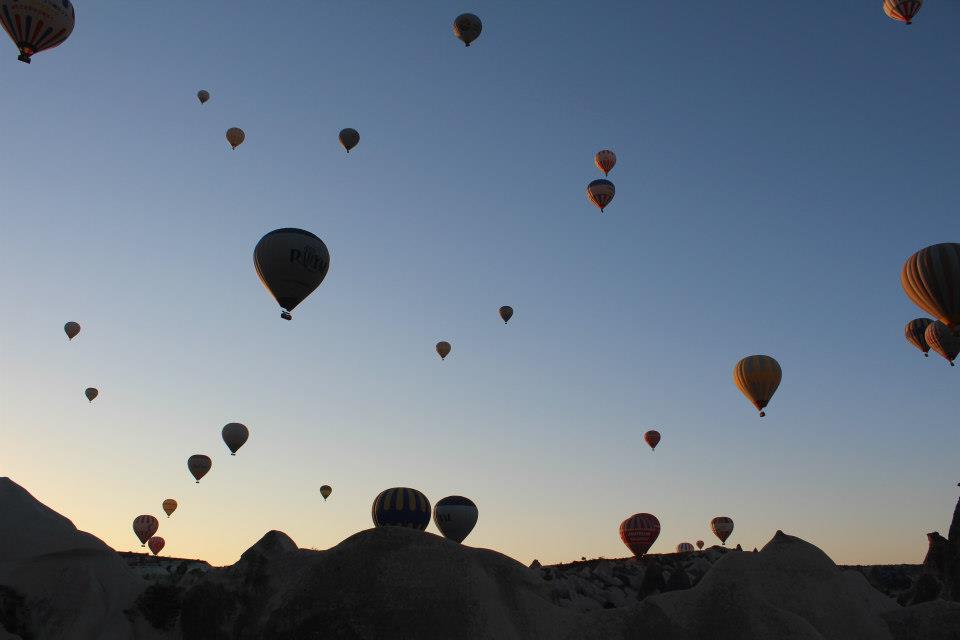 Virginia and Kirsten loved their balloon ride, made even better by having gotten a discounted rate thanks to Laura’s clout and by the presence of a journalist in their basket celebrating her birthday. What better way to end a balloon ride than with a piece of birthday cake and a mimosa, all before 9 a.m.?

As they recovered from their flight, I went out to run some more of my favorite country roads with this Nicest of Doggies Ever: 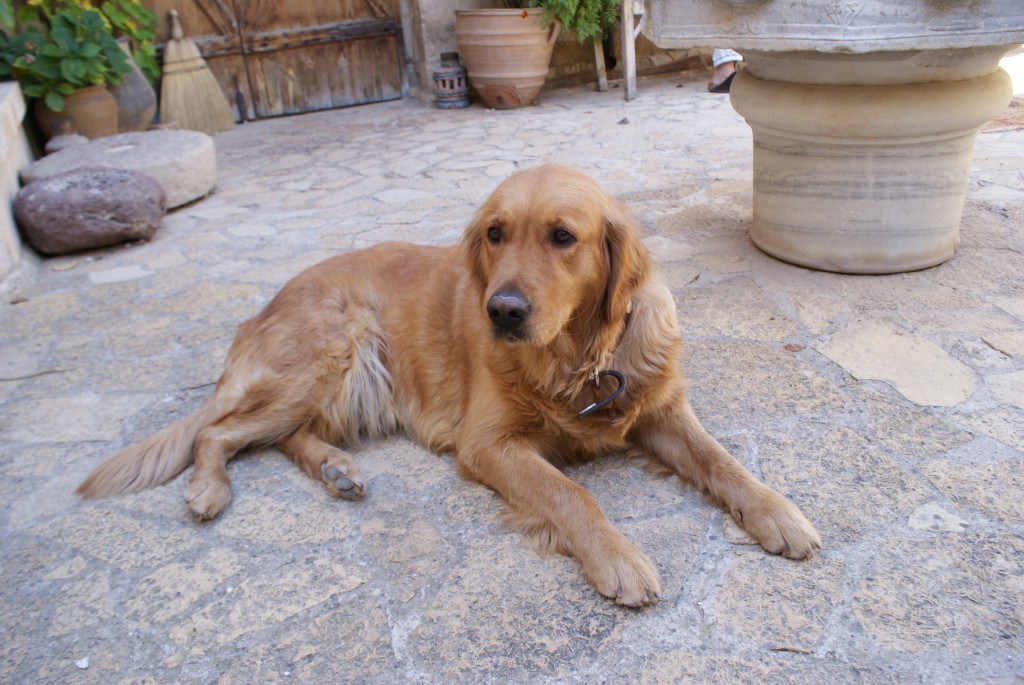 Later, back at Laura’s, our hostess took us on a quick walk to see “her” church. She bought it 17 years ago for $2,500, back when she was buying up property and buying it at scandalously low cost. For roughly the price of an airline ticket from Indianapolis to Toronto (I looked it up), she got a church dating somewhere between the 6th and the 9th Centuries. I’d rather save the money, drive to Toronto, see all the stuff in between, and get me a church, frankly. 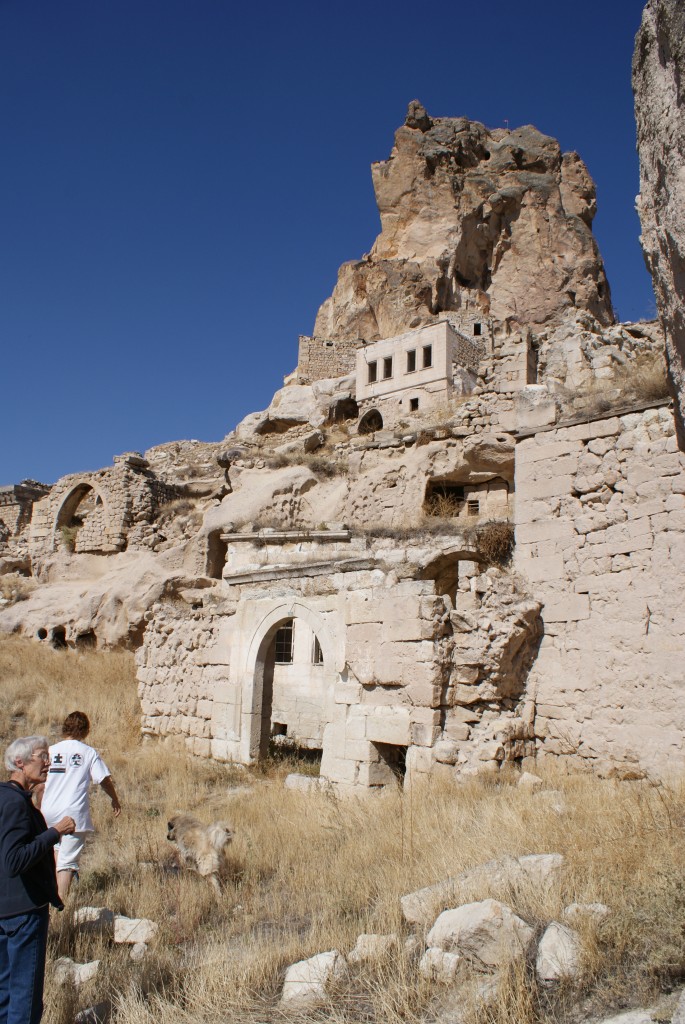 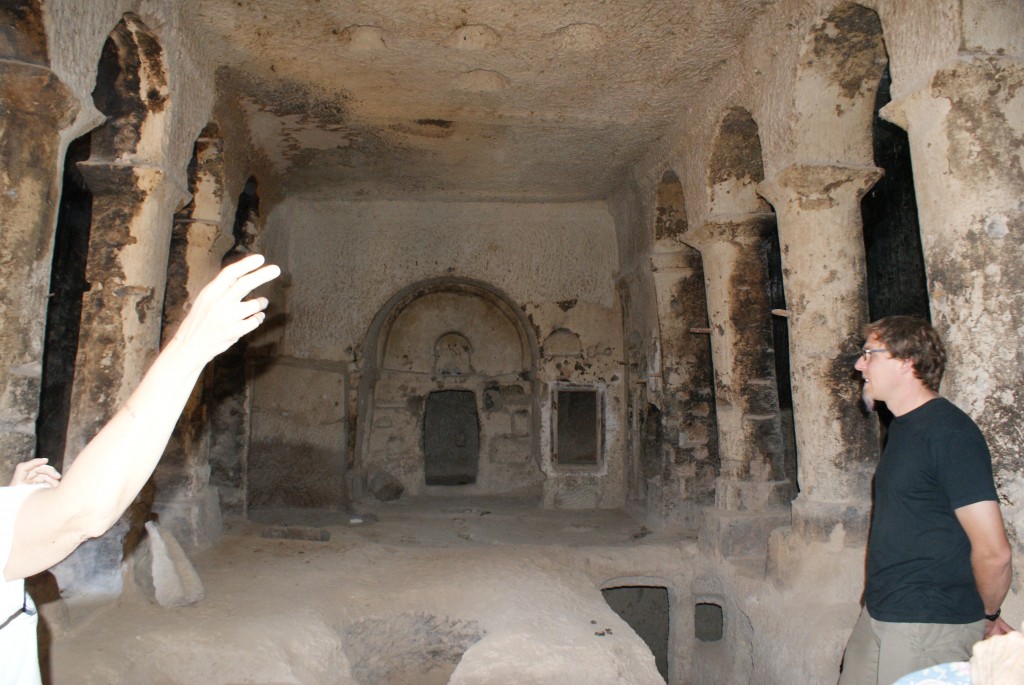 Here’s the view of Laura’s house from her church: 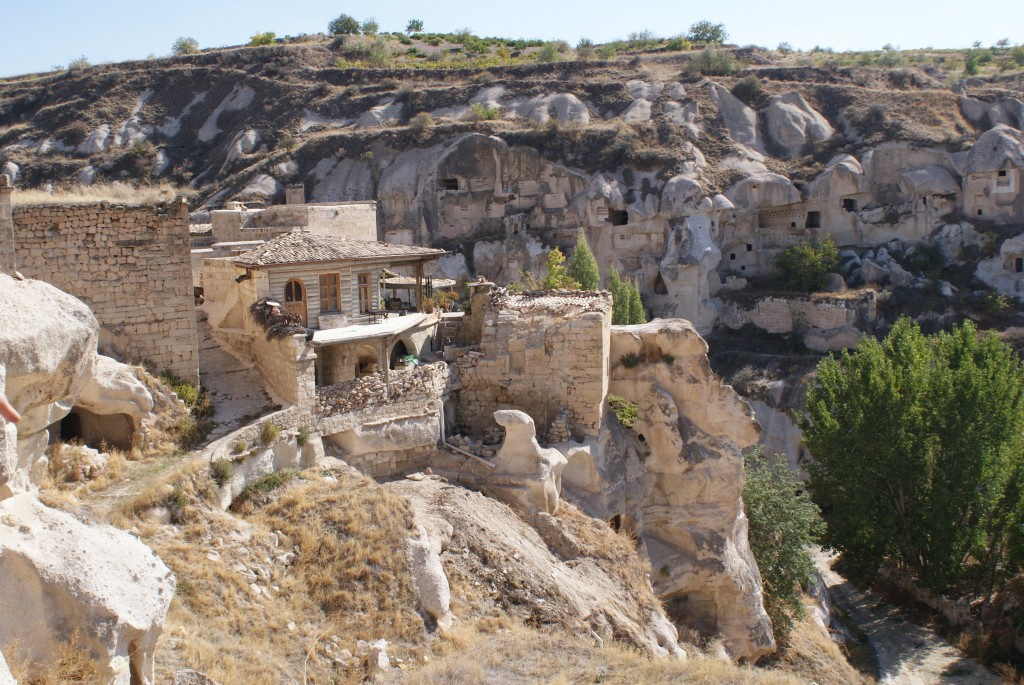 Having been to church, it seemed only fitting to hop in the car and tear away at high speed towards darker places. We started the afternoon’s tour in the town of Mazi, which features one of Cappadocia’s twenty-some underground cities. There are a couple other underground cities open to tourists, but they’ve been all slicked up and safe-ified. Mazi is just starting to think about doing that. They’ve hired an architect and are building an exterior. They’re doing excavations. But so far? It’s still rustic and raw. Our guide sized up our collective physical condition and decided we could handle the Rough ‘N Ready tour (not that he told us this), which meant we climbed up thousands-of-years-old tunnels and chutes, tunnels that have little footholds carved into the tufa rock, so the climber puts one foot on one side of the tunnel and one foot on the other side of the tunnel and scrabbles up. Where the rock is quite worn, small panels of wood have been hammered in. On the longest ascents, the guide put a harness around our waists and held onto the rope from above.

Best of all is this: he carried Virginia on his shoulders up every single passageway. He’d get her up into the hole, and then he’d scoot underneath her and nestle her onto his shoulders. Then he’d climb her up. The city is so dark that, even with our flashlights as help, I could only snap a couple of photos; my camera resisted the rest of my attempts. Here’s what I got: 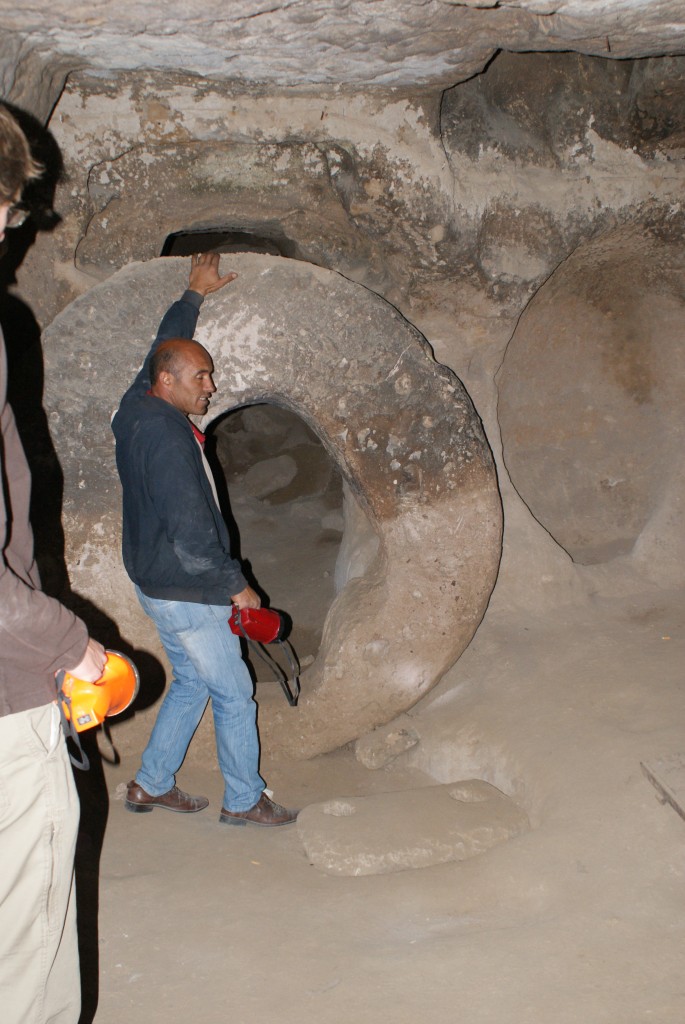 The next stop in our circle tour was at the Roman ruins (also undergoing serious excavation; Turkey has kicked itself into high gear when it comes to readying the place for more and more and more tourism) near the village of Sahinefendi: 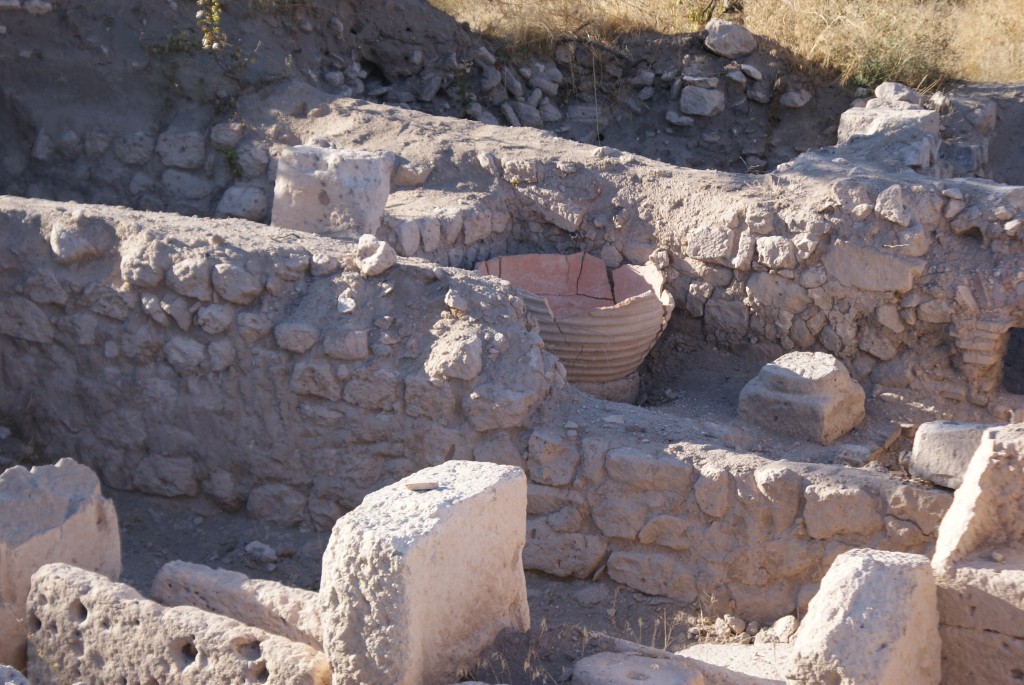 After the Roman ruins, we zipped over to the peaceful and bucolic Keslik Monastery. I’ve taken so many photos of all these places before that I’m finding the random “small” shots more interesting. For example, hidden behind a piece of the monastery was a stack of brooms. Just the right weeds have been growing, drying, and getting tied up. Where better for a family to store a year’s worth of brooms than behind the monastery? 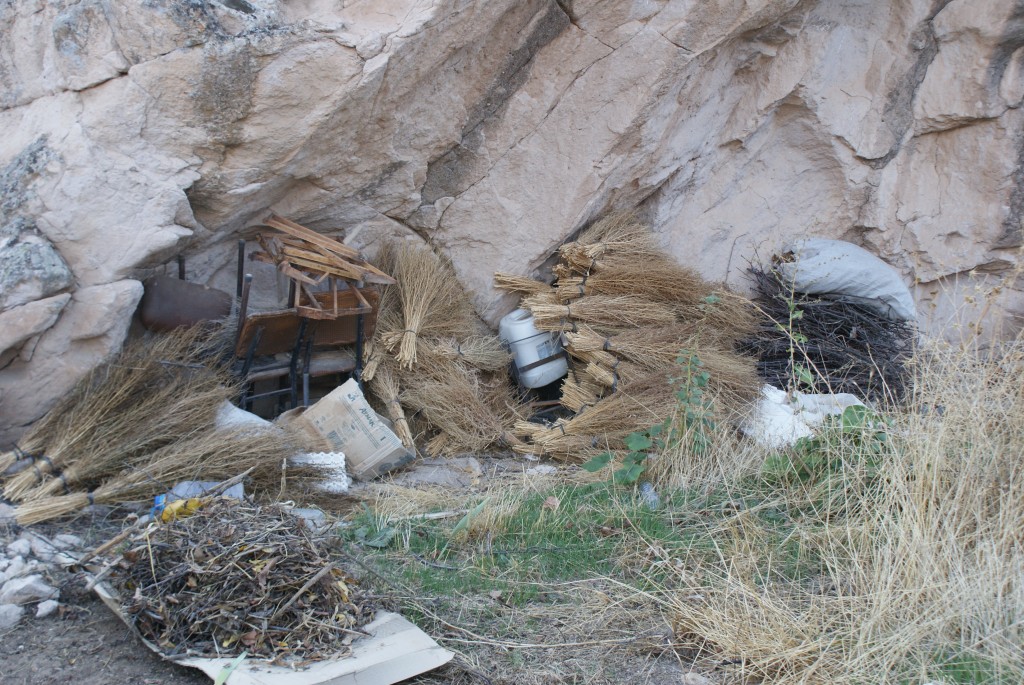 By late afternoon, we were back and Laura and Nurettin’s house, where we brushed the sand and dirt off our clothes (Mazi stuck with us) and prepared to take our hosts out to the hole-in-the-wall shish house of their choosing. One of my favorite things about Turkish food is the mezzes (appetizers). A various assortment of all kinds of everything is laid out across the table in dishes. Then everyone dives in. 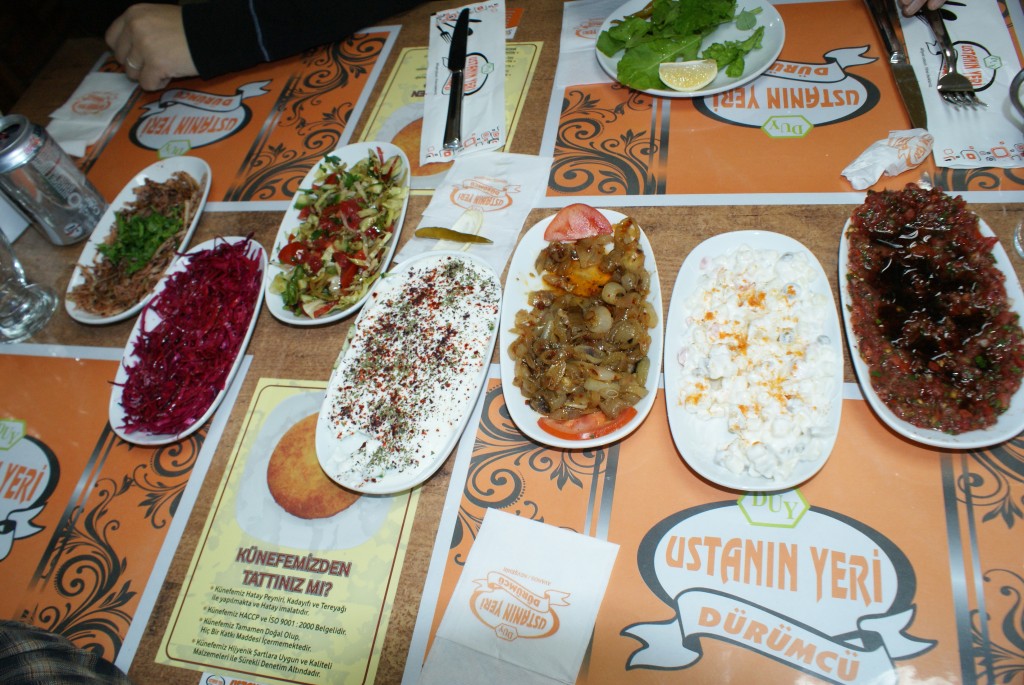 Hey, guess what? Byron’s teaching a mezze class in Duluth in November! Sign up now, before it fills!

Dessert was kunife, which is essentially Shredded Wheat soaked in syrup and featuring cheese in the middle. This is a dessert that pains me not at all to pass up. This is not the case for Nurettin. 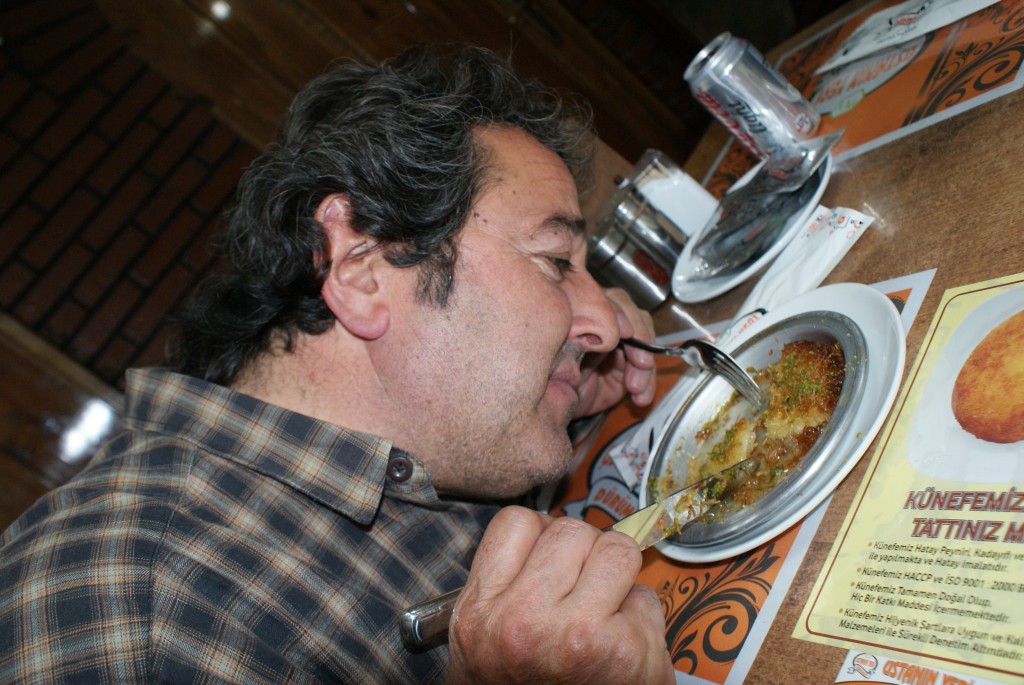 Virginia and Kirsten discovered a great Like of the stuff, too. 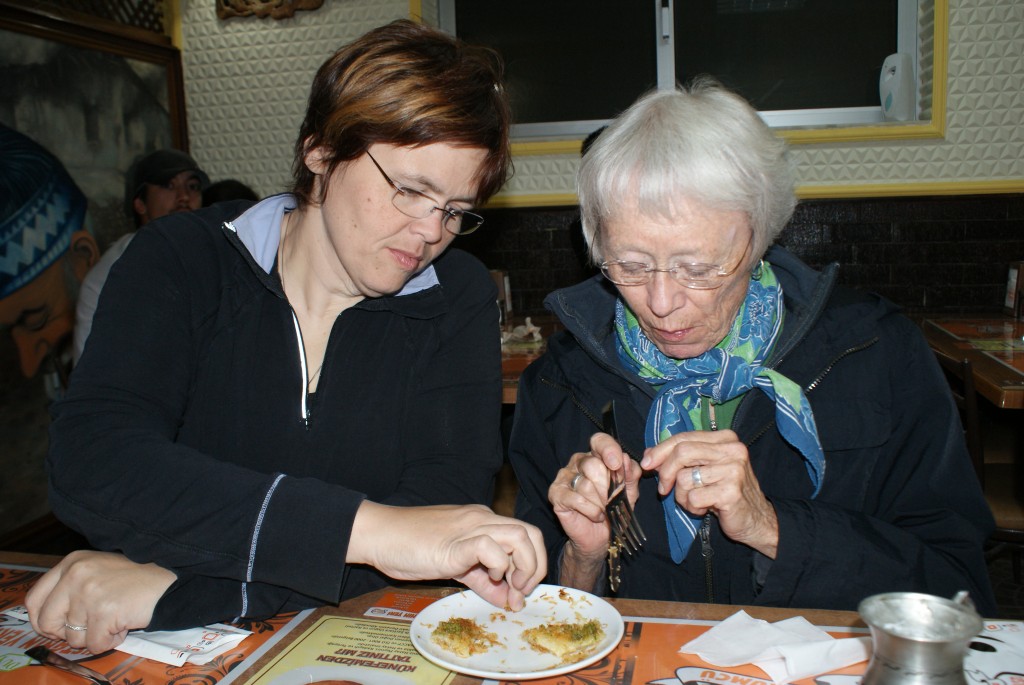 Incidentally, Nurettin has no gaydar for women and is completely unable to hold the thought in his head that Virginia and Kirsten–yes, their age difference can run interference on perceptions–are a couple. He has spent the last three days joshing Virginia about how he’s going to find her a husband. She has taken it well and deflected his every joke.

But, um, then he brought a geezer over tonight and attempted to facilitate an introduction.

I am eternally grateful that Virginia used to teach communication classes and is well able to negotiate her way through any potentially-tough situation. If that fails, feigning a complete inability to understand what’s being said and proposed also works.

So we gathered together tonight, as we have the last few, and tomorrow we’ll head out on the next leg of our trip and once again plaster Turkish kisses on the cheeks of our Cappadocian friends as we bid them a gratitude-laced adieu. 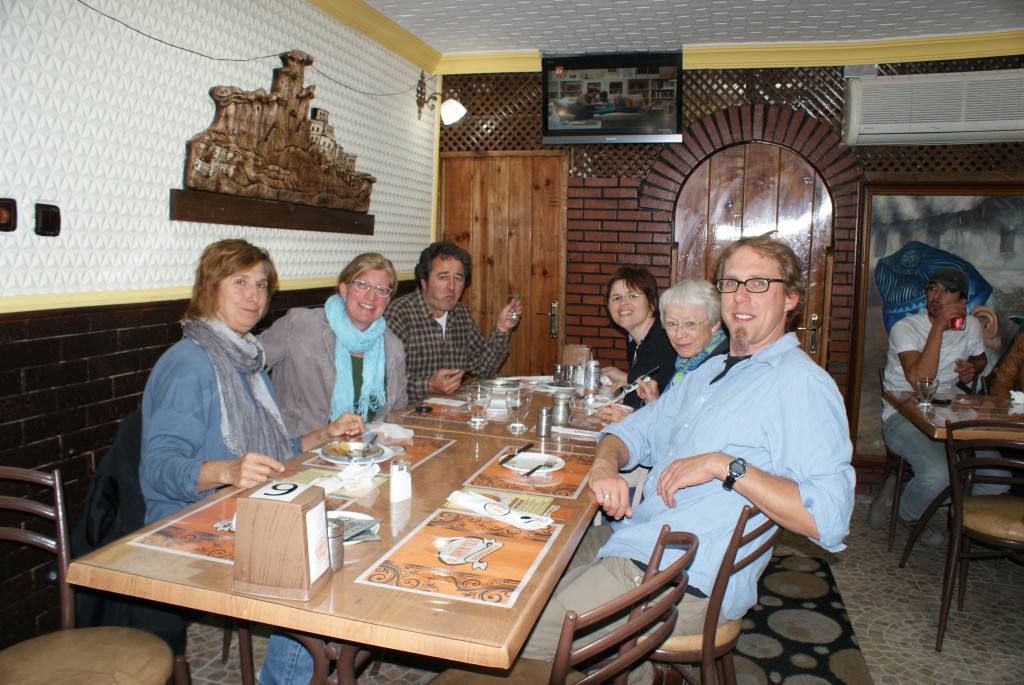 Ah, but before we zip off to see the sunset of the Hittites, we’re spending tomorrow morning at a carpet shop (a good one, run by a friend), having coffee with a different friend, and switching out our cruddy rental car for one with tires that can actually drive on loose rock. All the better if the tires have been aligned in the last decade.

In sum, it’s been yet another full day, during which we–seriously–accepted and declined no fewer than ten offers of tea.