Nothing highlights what a picky eater I am more than a table full of 800 bowls, from which I eat two things. 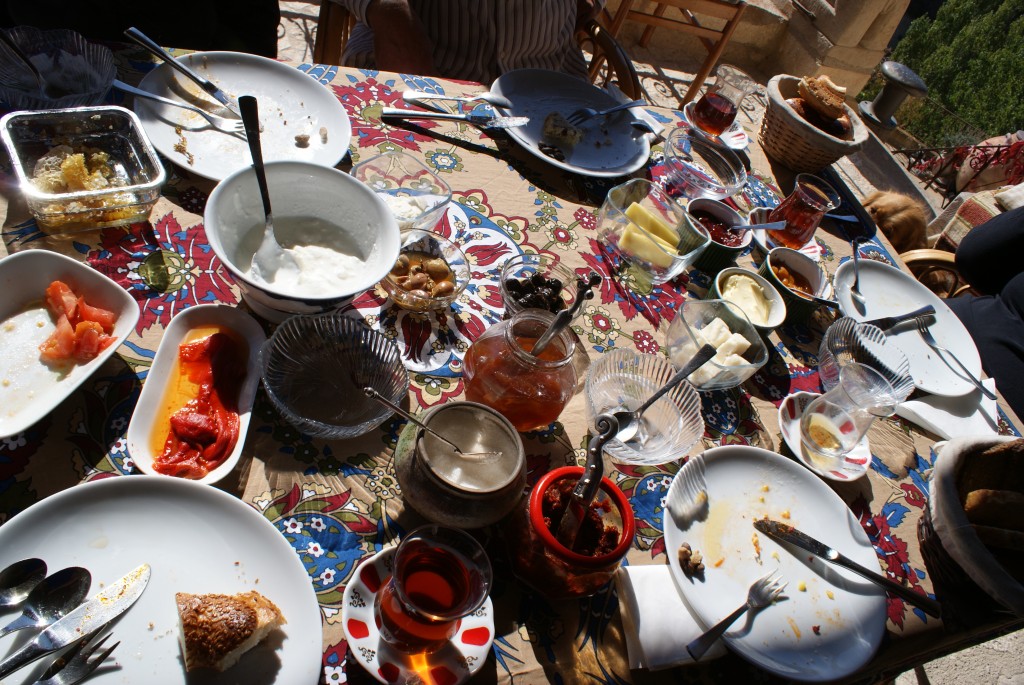 I do like honey. And cucumbers. And the red pepper paste on the frittata. All the other stuff? Right up Byron and Virginia’s alley. More accurately, “down their gullets.”

Indeed, those two share a palate for savory, even slightly sour. The earlier in the day these tastes can be shoveled into the mouth, the better.

For me, not so much. I’ve never liked olives or tomatoes, and my aversion to something fundamental in Turkish dairy products remains.

In more positive news, I’m coming along swimmingly on the lokum-liking front. Previous to this trip, I could look at a box of lokum and never consider cracking it. Now, wellllll, if it’s fresh from the dried fruit & nut store, I’m all over the pomegranate gel encrusted with pistachios. Please, Bey Efendi, may I have another?

After that final warm and chat-filled breakfast on Laura and Nurettin’s terrace, we readied ourselves for goodbyes, a process lubricated by the requisite group photo just before hugs and tears (mine). Because Nurettin was at his workshop, we found a stand-in (hmmm, but is it the dog or the photo?). 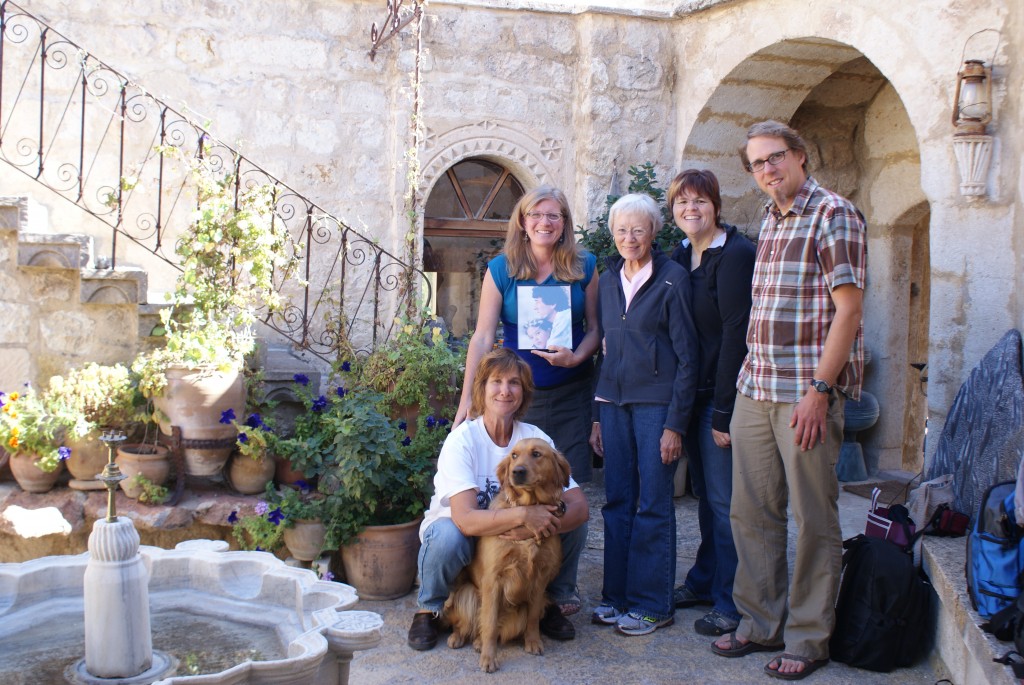 Not only will we miss our Ortahisar friends, we’ll also miss their “maid,” Senay, whose dignity, discretion, and gentle smile are appreciated by everyone in her orbit. 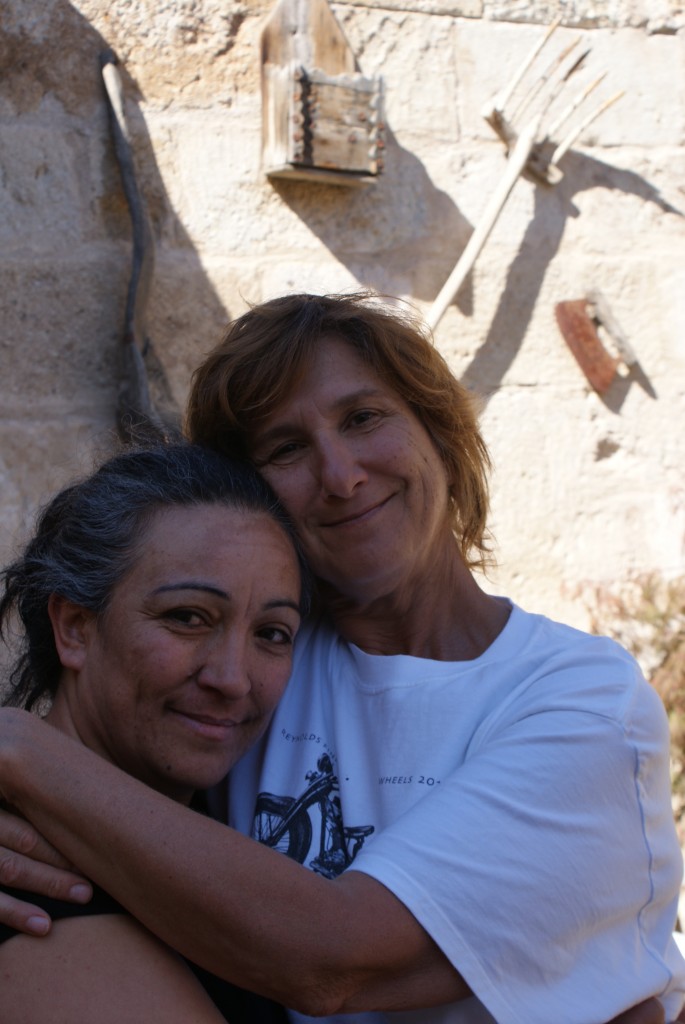 Having checked out of Laura’s hotel (her place actually is a hotel, so if you’re up for it, I can give you her contact information), it was time to head to Goreme to visit friend Ruth’s carpet shop once again. After some mulling, Virginia and Kirsten had decided to make a purchase. Outside Ruth’s shop is the carpet crew’s baby donkey. Its diminutiveness compensates for its general state of scraggle. 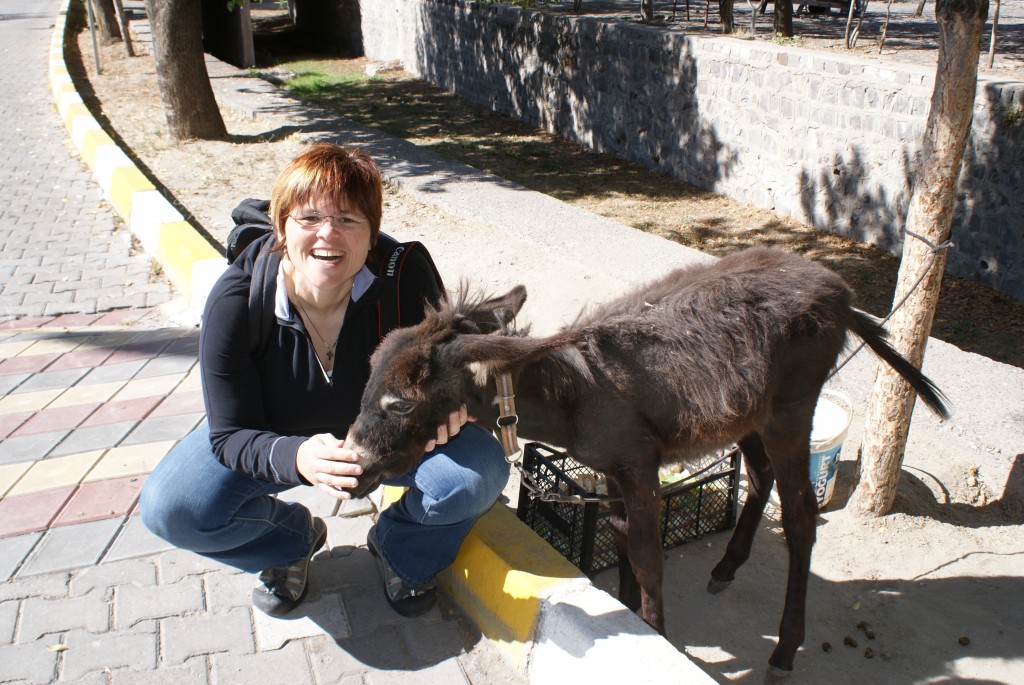 The great thing about Ruth’s shop is the feeling of invitation. Sit. Have tea. Chat. Listen. Learn. Have more tea. 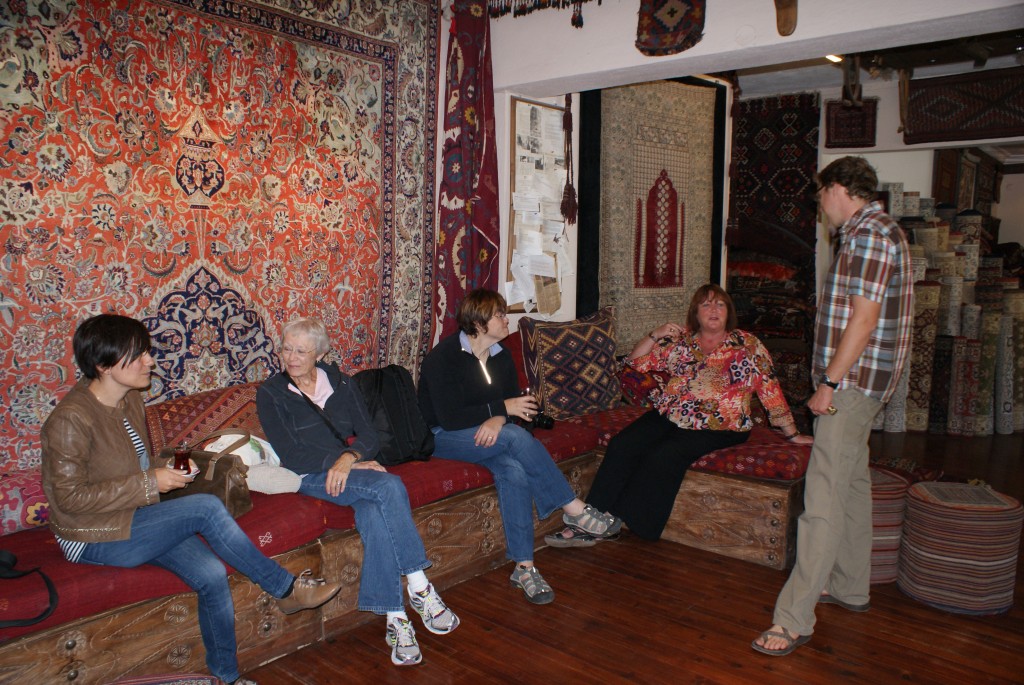 Our Turkish friend, Deniz, came to Ruth’s shop so that we could have an hour of catching up. She’s a pathologist at a hospital in a nearby town, and she’s someone for whom I developed a true affection during our year in Cappadocia. It doesn’t hurt that she’s so itty I could eat her for lunch, were I so disposed. So long as she’s not savory or sour, of course. 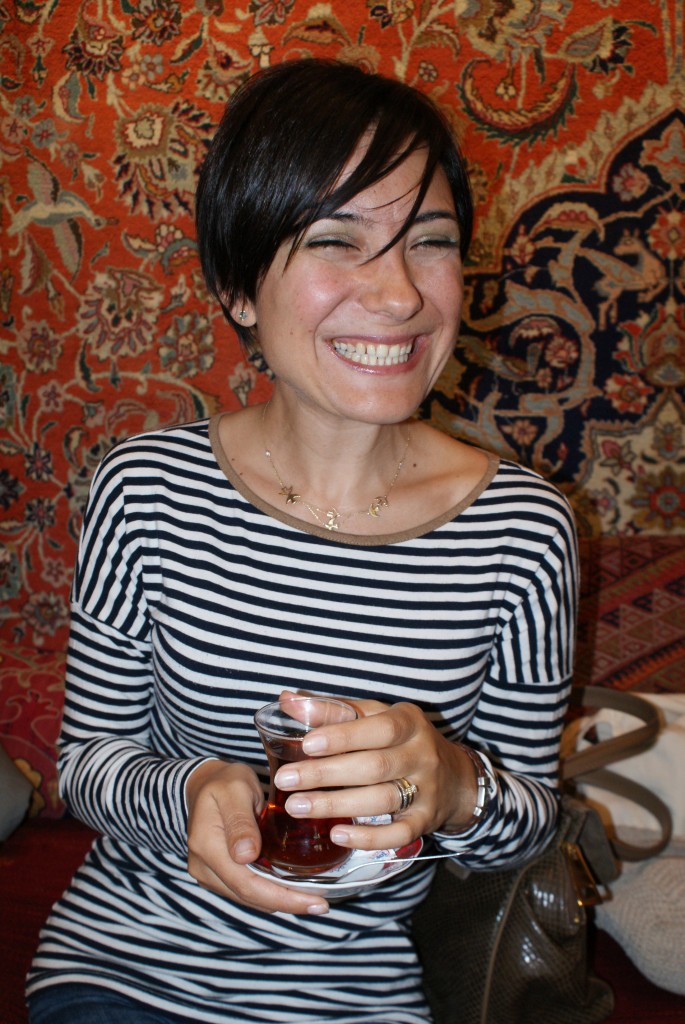 When I entered the store, Ruth called me over to ask if her shirt were so sheer as to be TOO sheer. I assured her that the heavy patterning camouflaged all her best bits quite properly and that all I could make out were her dessert-plate-sized nipples.

Then I asked her to toss out a nip for easy viewing. Happily, tossing back her hair, she obliged. 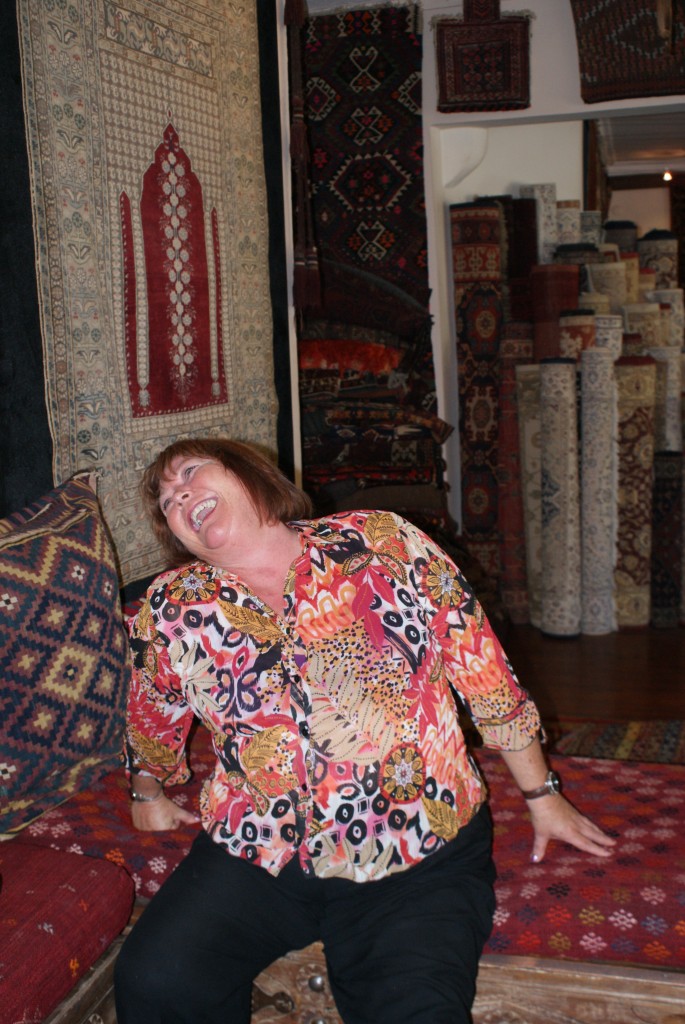 As conversation and tea continued to flow, Kirsten and Virginia got down to making a decision. 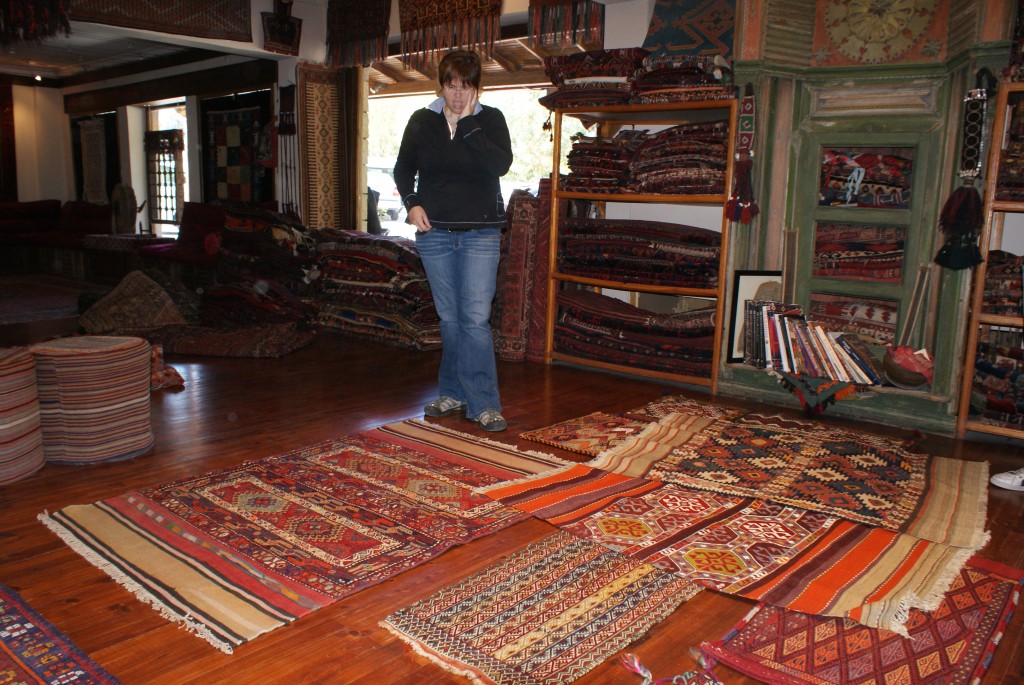 Ultimately, they bought a cradle bag kilim. Formerly, the rug had rope loops around its edges, so that the loops could be threaded through and the resultant bag hung from a couple poles. Then a string was tied from the cradle bag to the mother’s toe; while Mama sat and did her knitting, she could tap her foot and rock the baby.

When it was time for Deniz to head back to work–lots of biopsy slides to read–we again lubricated the goodbyes with a group photo.

Please admire what a beastmaster Byron is compared to Deniz. She tried to explain to us that she’s of Turkmen stock, which is apparent from her triangle-shaped eyes, but I maintain she’s descended from elves.

It would help her case if she’d stop snatching a handful of fairy dust from her purse every five minutes and scattering it everywhere she goes. 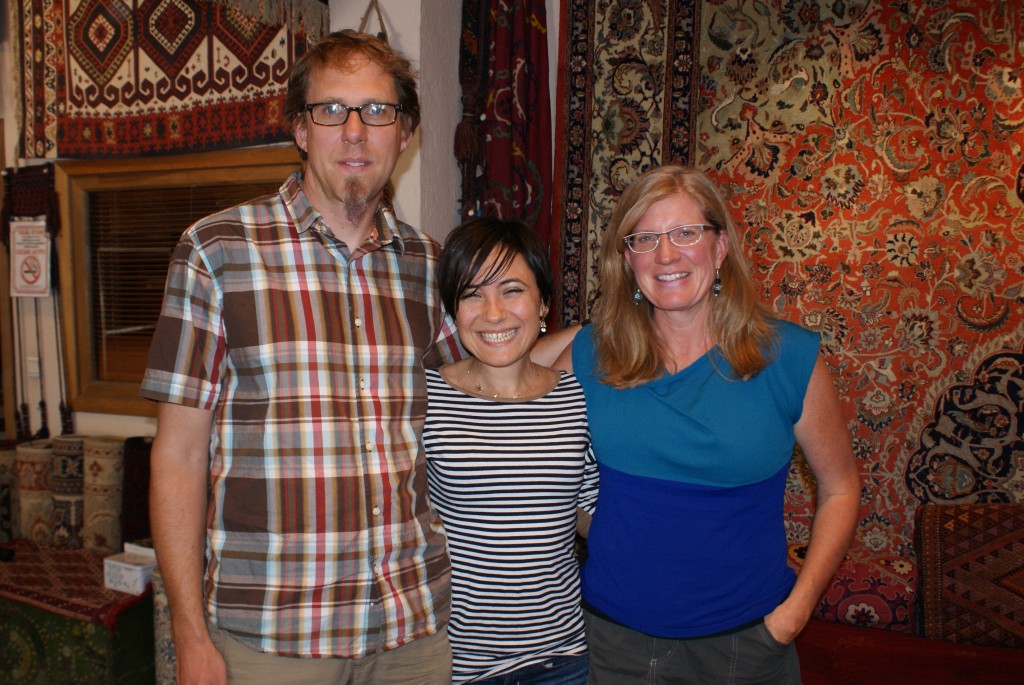 After a lovely lunch of gozleme (village food: kind of like huge soft tortillas stuffed with spinach, cheese, or potatoes) with Ruth, we hit a couple more shops and then hopped into our newly-repaired rental car. The tires had been replaced; the alignment, erm, aligned; and the scary noise from the transmission quelled. It was time to leave Cappadocia and head towards Hattusa, the ancient capital of the Hittites.

Arriving near the village of Bogazkale just at sunset, we pulled off to view a Hittite rock sanctuary–used for ceremonial purposes (a phrase just vague enough that no one actually has to admit she has no earthly idea what actually took place on the site; whatever it was, from sacrifice to coronation to funeral, I’m sure there was pomp). Personally, I don’t care what they did there, so long as someone carved figures in the rocks. I firmly believe that, without carved rock figures, one shouldn’t even bother with a ceremony. Just ask my wedding planner. He still crumples into tears when you mention my name in his presence, whimpering, “I thought she said ice sculptures,” his sobs subsiding only when his boyfriend hums a few bars of Elton John’s “Can You Feel the Love Tonight” softly into his ear. 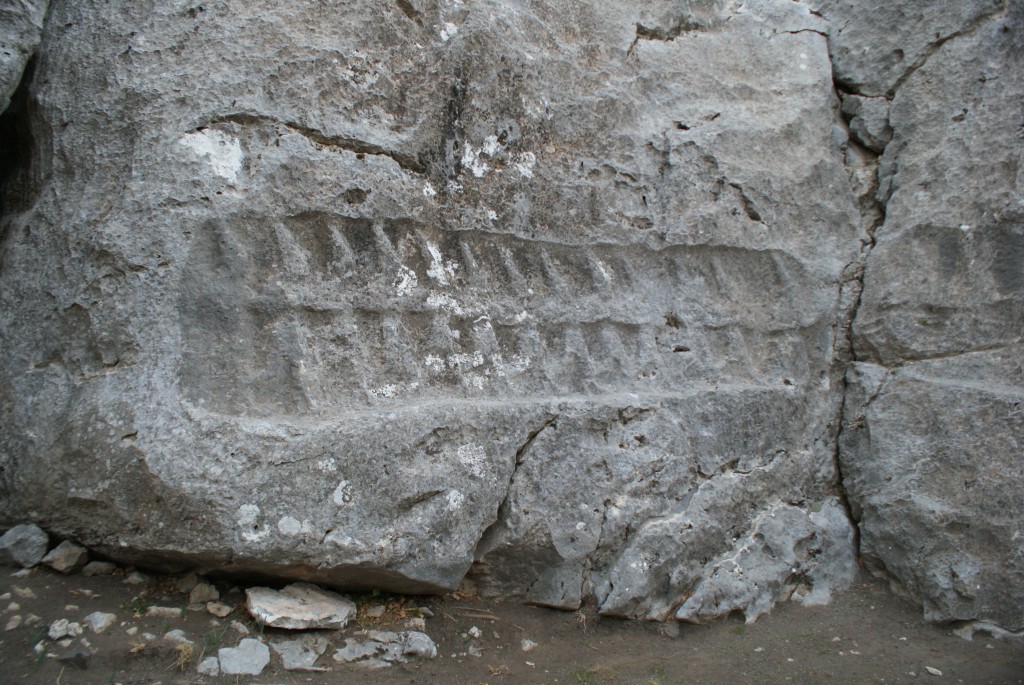 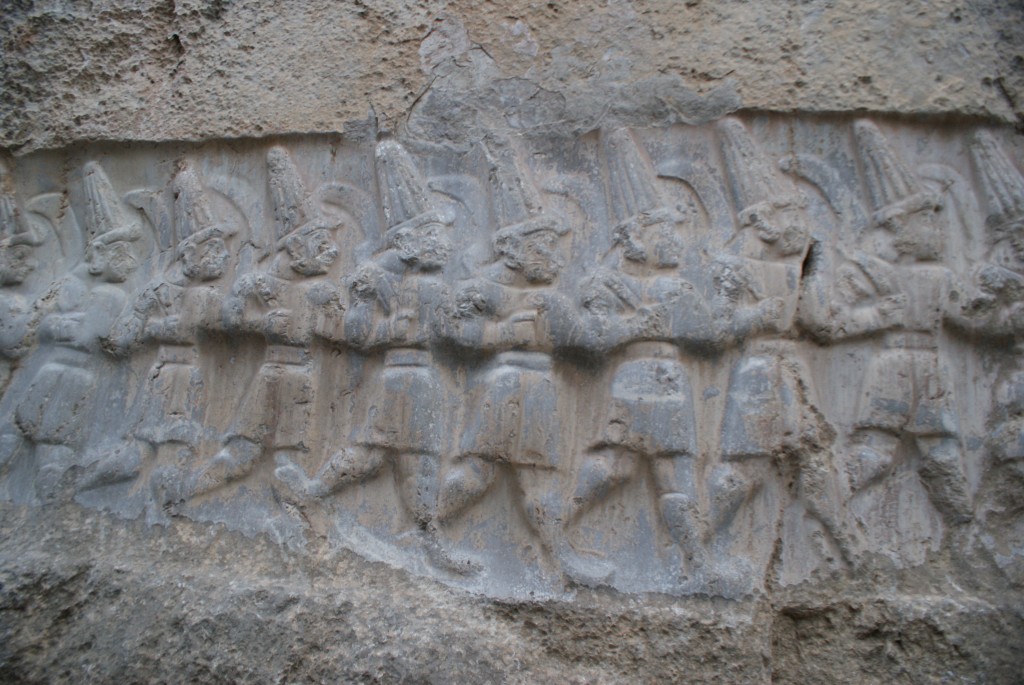 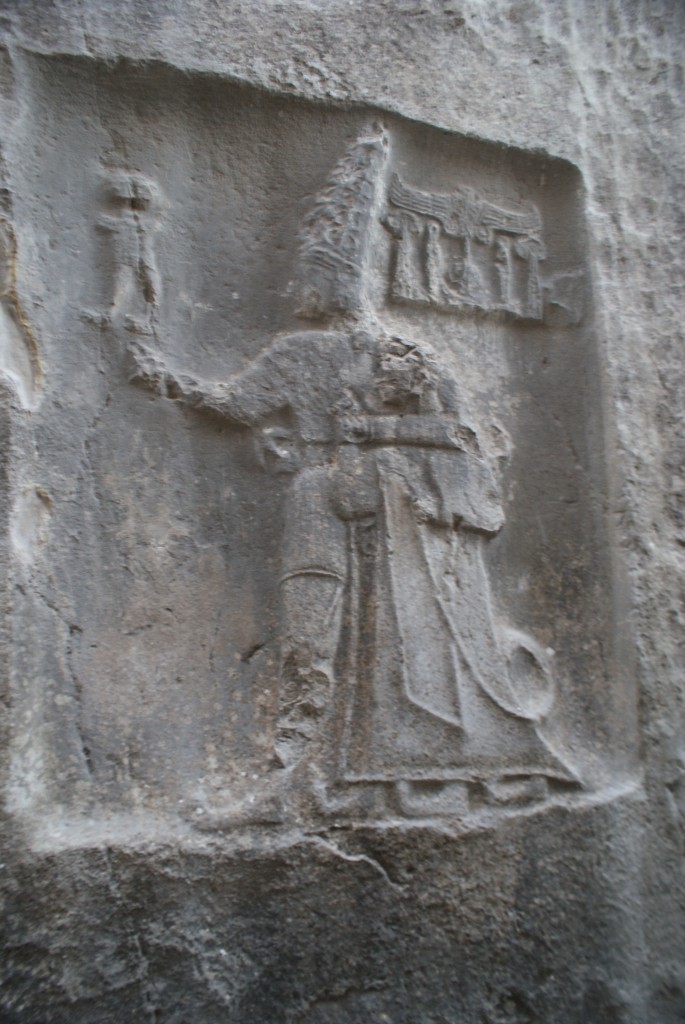 Then there’s my rock guy. I like this picture because it shows how very soon all the purple will have grown out of Byron’s facial Statement Hair: 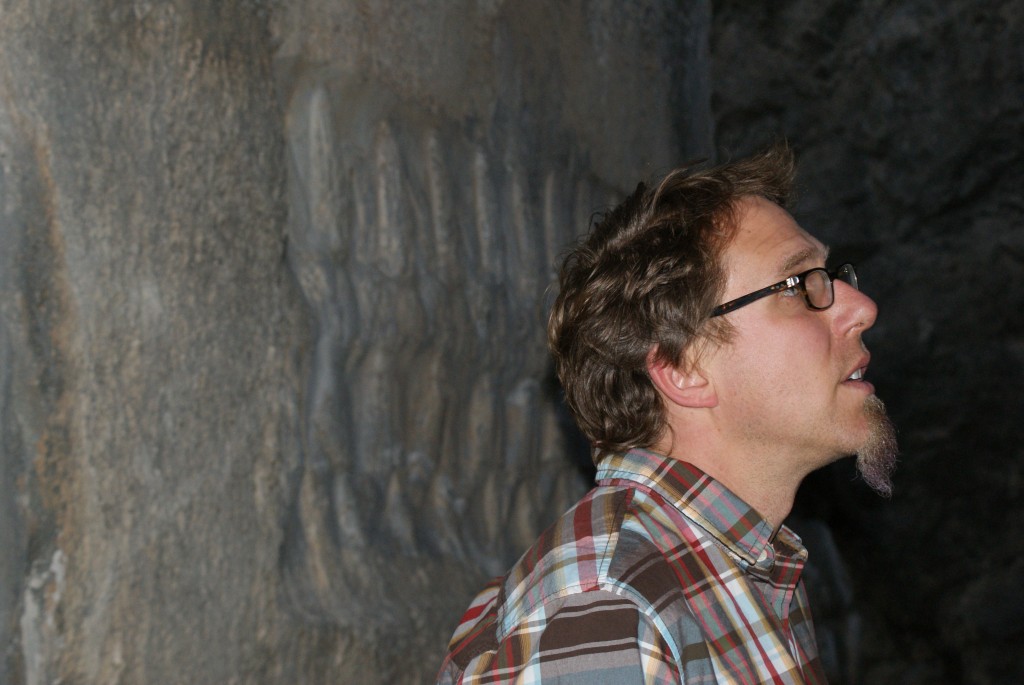 With darkness setting in, we stopped at the Kale Otel, which is where we stayed with the kids a year and a half ago when we visited this area. As was the case then, we enjoyed the feeling of being the only guests in a well-prepared establishment. 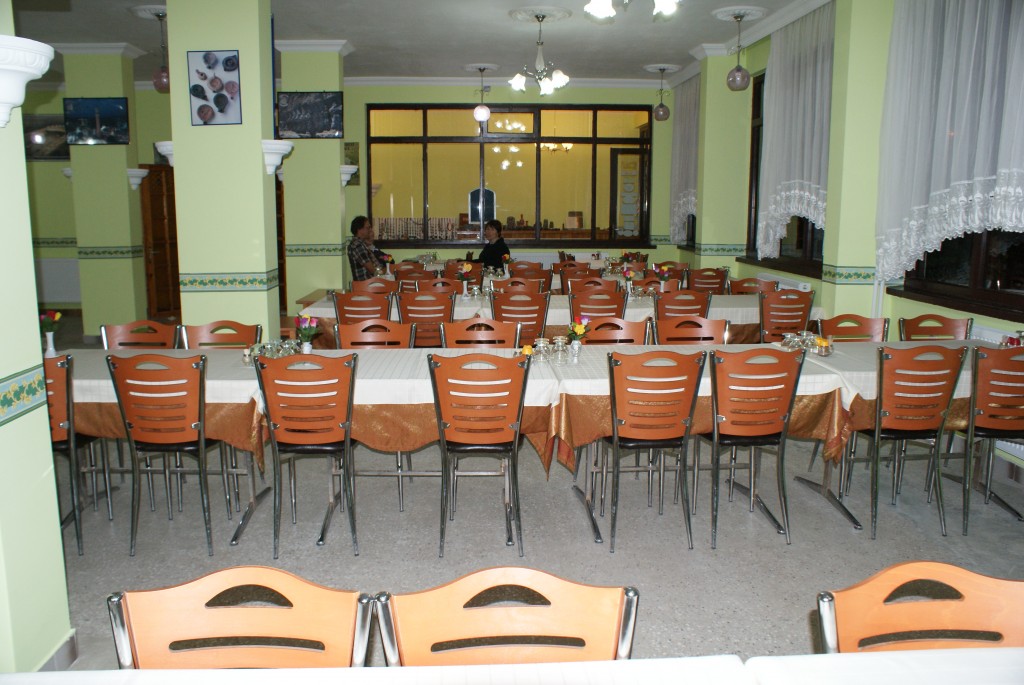 Tomorrow, we visit the Hittite city of Hattusa. Then we drive up to Amasya.

I know. I KNOW. You’re excited about Amasya’s cliff tombs and wooden Ottoman houses, too!

carpet sellers of the good variety, driving The Anatolian Plain, gozleme, old friends who are young