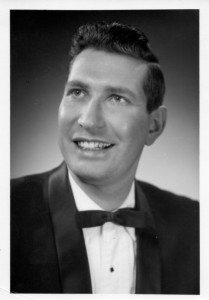 One year, when my dad’s birthday rolled around, my mom didn’t know what to buy him for a gift–he already lived under Montana’s Big Sky and possessed a lovely tenor voice, both of which made the case for him as A Man Who Had Everything. So she did as many a clever gift giver had in the past: she made his present.

She made him a baby, and that baby was me.

I was wrapped in a soft blanket and presented to my dad on March 25th, 1967. That day, I was zero; he was thirty-two. The day before, his own mother–born in a dugout sod house forty miles away from the hospital where I was delivered–had celebrated turning fifty-two. Thirty-three years and six days later, Baby Jocelyn would give birth to her first child, a Girl. From March 24th to March 25th to March 31st, the last week of March has always been loaded with birthdays in my family.

One of the many beauties of my life has been my status as Baby of the Family. As the third of three kids, I enjoyed the best of everybody: I was Mamma’s Girl, Sister’s Girl, Brother’s Girl…and, of course, as his special present in 1967, Daddy’s Girl. 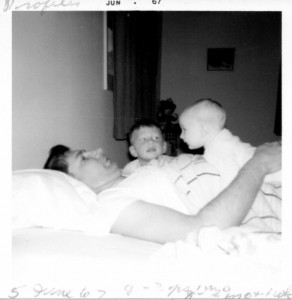 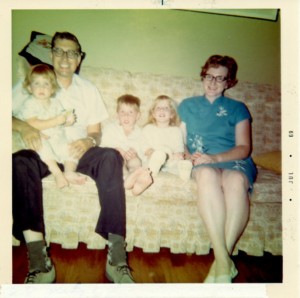 As the years passed, we always enjoyed sharing a birthday. Naturally, Dad didn’t get feted the same way I, a kid, did. For me, there were party hats and friends gathered ’round and much-observed blowing out of candles. 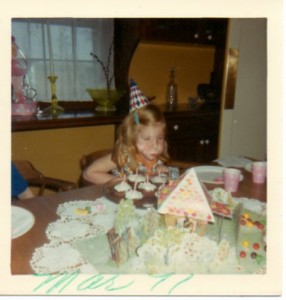 Mixed in to every year were the birthdays of others, such as my sister below, turning twelve, much to my delight (CAKE!). 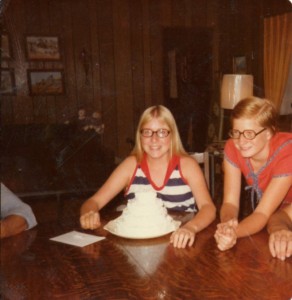 Then the summer would end, school would begin, and it would be fall, then winter, then a new year, more holidays, more birthdays, more life. 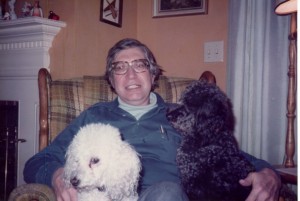 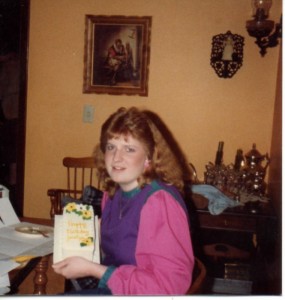 All words–all possible apologies–fail me as I try to make amends for the hair on that sixteenth birthday. Chalk it up to 1983 and the exuberance of youth.

I blew out the candles. I opened gifts. I wished my dad a mutual happy, happy day.

Cake demolished, we carried on. Back to life. Back to studying and practicing and visiting. Always back to music. 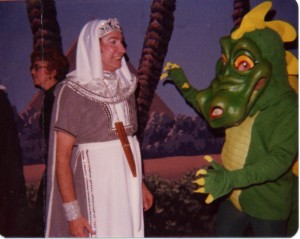 Here, Dad is all tarted up for his role in The Magic Flute. Is there really a dinosaur-lizard creature in Mozart? I was too busy frizzing up the back of my hair to pay proper attention.

A few more years passed, and I went off to college, where I was surrounded by new friends, foregoing even silverware on my 19th birthday. 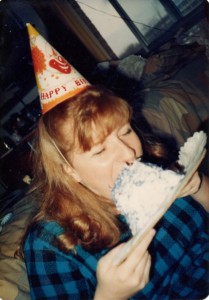 As ever, March 25th was followed by March 26th, which then spun back into studying and dancing and lolling.

At home, in Montana, the music continued. 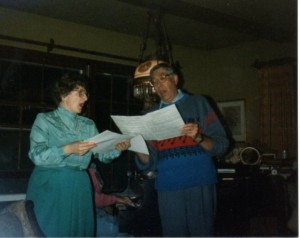 At some point during college, I became enough of an adult that Dad and I could share a cake on our shared day. I’d started from him, gone off onto my own, and come back to rejoin him with more deliberation. 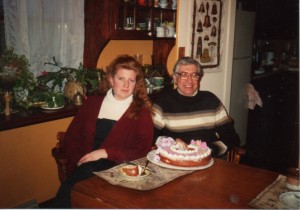 Of course, as children do, I then hopped back in my car and drove away. For Dad, there was gardening, music, tv. Life. 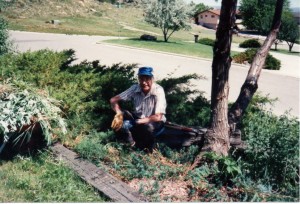 I graduated and began my own career. And then my grandma, born on March 24th in that sod dugout on the prairie, died.

I sat next to my dad at the memorial service and pressed my leg against his, absorbing the shudders of his body as he wept. Later, in both the hollowest and most meaningful of gestures, I put my hand on his knee. 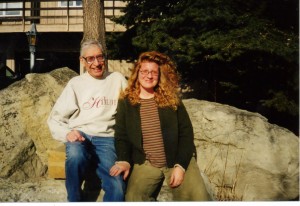 Then I got in my car and drove away. He taught. Gardened. Sang. Observed.

As the seasons went ’round and ’round, my brother got married and became a father. I became an aunt. My dad became–most joyful of things!–a grandfather. 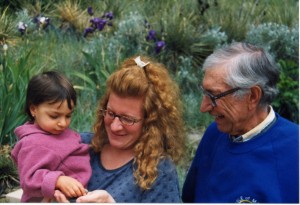 With a few more spins of Earth’s axis, I, too, married and had a child. My parents’ joy grew. 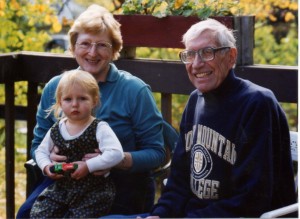 But then we all would get in the car and drive away. He would dig in the dirt, watch his shows, look for coupons. Always and ever, there was music. 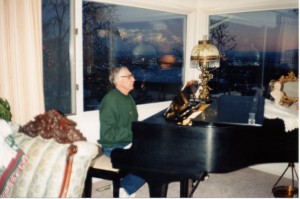 Sometimes, he and my mom would get in the car and come to us. His thousand-watt smile never beamed more brightly than when we was with his grandchildren. 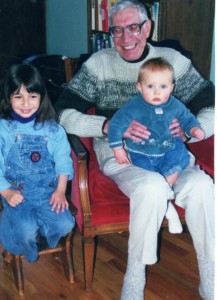 My father has four grandchildren, but he only ever met two of them. He was in his final decline in the hospital as I gave birth to Paco. Fifteen days after that emergency C-section, Dad died, alone, still hopeful of a recovery, his heart and lungs finally giving out after years of chronic ailment. Two months later, his fourth grandchild was born.

It’s his not knowing his grandchildren as they grow up that slices me most. Now, a decade later, they are, to a one, intelligent and creative and funny and poised. His death at age sixty-seven means his most amazing legacy will never know what they missed.

Now it’s March 25th again, and he would be seventy-seven. This is my tenth birthday without my father. I am not maudlin or overly-sentimental about his passing. His death means he was alive.

That he was alive means I’m alive

and Paco can ask to play baseball at dusk.

Birthdays are, of course, our way of marking time, of slowing down long enough to take stock, of noting where we are in the arc of our lives, of taking a guess as to how much more we might still have in front of us.

Dad and I won’t share a cake this year. We won’t wish each other “insider” birthday greetings. I won’t put my hand on his knee ever again, nor will he ever again slide into the driver’s seat, snap into his seat belt, and put me at the center of everything by asking, “Where do you want to go?”

I was his most-original birthday present.

He was my gift of a lifetime. 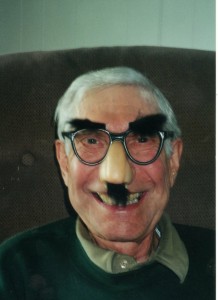