I walk into the locker room at the Y, glad that the hour for reading Us Weekly while fiddling with the controls of a Stairmaster is upon me.

How lucky a gal am I, I muse, to be able to bring my toys to a place where I pay money to manufacture difficulty for myself?

Wondering if it will be Bruno Mars, Kansas, Ida Maria, Cloud Cult, or Bob Mould wailing in my earbuds while my forearms pop with sweat–because who can predict the whimsical ways of the iPod on “Shuffle”?–I plop my gym bag onto a bench.

Pulling on the zipper, readying to plunge my arm into the pungent depths of the bag and start yanking out towels and magazines, I glance up at the locker in front of me. 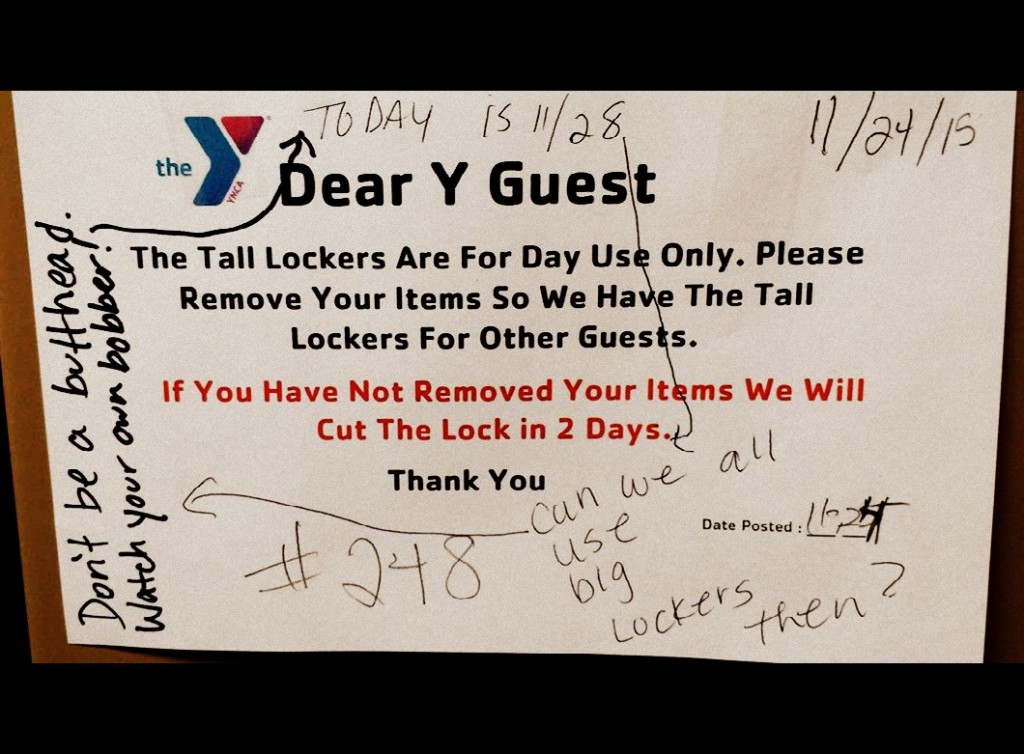 The sign hanging on the tall locker in front of my gaze resembles a flow chart. What to the huh?

After staring at the sign for a minute, I decipher the situation. As is usually the case when it comes to human beings interacting, I am grateful to find myself a couple removes outside the fray. Because–botheration!–PEOPLE.

The situation is this:

Eventually, with a Motherly Wisdom journal plan in place, I stuff all my bobbers into my workout clothes, grab the US Weekly from my bag, and head upstairs to the Stairmaster.

Twenty minutes later, when I get bored, I take a little break to wipe the sweat off my forearms and look around the cardio center for pinched women with disappointed, angry faces and the outline of ballpoint pens in their bras.