My brain is asleep. So is my body. The noise doesn’t fully register.

After a quick blip of “Huh?” I drop back into the blackness of sleep.

Hell and damn it. My brain pushes to consciousness like it’s swimming up from the bottom of a murky lake, half panicked, gasping for air. As it surfaces and draws in a shuddering breath of wakefulness, the only thing to pierce my confusion is this: there’s a chirping in the hallway. I lie there in the dark, discombobulated, trying to figure out what day it is, what time it is, what my name is, who’s the president, why Kanye’s a genius, why creme brulee isn’t the new kale, and how in the glottis my husband can still be snoring when there’s a robin or a katydid or a Kristin Chenoweth periodically pipping mere feet from his head.

I spend a few minutes engaged in magical thinking, during which I dreamily muse that the noises might simply have been the house settling, or something toppling off a shelf in the closet, or the sound of a ghost sharpening knives, lulling myself with assurances that the chirps won’t necessarily contin–

This time, I’m awake enough to understand: it’s the smoke detector remonstrating us for letting Daylight Savings pass without changing its batteries.

As I sort out what’s happening, I rue the law of batteries that decrees they must die when it sucks the most. Commiseratively, my husband, Byron, exhales a steady zzzzzzz. This takes me back to the early years of our marriage; he slept, while I felt around in the dimness for babies and boobies. Sometimes, with the first kid, he’d wake up, too, and we’d turn on a bedside lamp and spend precious Hallmark-sponsored moments together staring at our daughter’s soft, tiny fingernails while she nursed.

A few weeks into that, we realized that middle-of-the-night communal marveling resulted in a completely non-functional household the next day. If we hoped to eat good food and pay bills on time, then at least one of us should get some sleep. During the next handful of years, as my breasts and I continued to work the black hours, Byron applied himself wholeheartedly to the task of getting reasonable sleep, The result of this was a household wherein Daddy made delicious homemade pesto that Mommy loved to eat–that is, once she lifted her head off the steering wheel, wiped the tears off her cheeks, and trudged into the house for dinner.

In the intervening years, the zzzzzzzzzs have continued, but nowadays I sleep (or read or fret) rather than nurse. Instead of tag teaming our days, as we did when the kids were new, Byron and I now share a common purpose at night: resetting for the next day.

Unfortunately, that smoke detector is putting a serious crimp in my reset.

Shivering in anticipation of the cold air, I try to convince myself to throw open the covers and stand up. I try to make myself be the adult in the room. I try to fool my brain and body into thinking the chirp is actually a hungry baby.

Brain and Body are no patsies. They know I’m messing with them. In desperation, Brain argues that the definition of “adult” is actually, simply, clearly “the tallest person.” Then Brain points out that Byron fits that definition. Because Brain is emphatic about making her case, she also notes that the smoke detector is high on the wall, near the ceiling, a place that’s easier for taller people to reach.

The notion of thumping downstairs to get a stepladder convinces me: I’m going to shove the snoring guy and make the chirp his problem.

We’d have to ask Brain to be sure on that one, and she’s currently refusing callers.

With Byron’s next wall-rattling inhale, I slip my knees behind his, trying to pry him to consciousness with a hearty spooning.

He doesn’t stir. Spooning feels too much like clean, direct love, and this endeavor is about hoggish, miserly love. This is about a love that entails him getting up and taking care of things so that I can stay in the bed and be warmly supportive from the island of mattress.

I whack my foot into the back of his calf. Twice. Firm-like.

He rears up, bleary and confused. Poor thing’s a full four minutes behind me that way. Since he’s the one who’s discombobulated, and since he doesn’t know yet that he’s about to get up and handle my problem, he deserves kindness. Softly, I start to talk. In truth, I could just say “Eep, opp, ork, ah-ha” for the first few words, as I’m only moving my mouth because the act will get him to remove his earplug. Once the earplug comes out, I shift into genuine content: “So there’s a noise in the hall…”–

as though it had been scripted, a chirp echoes loudly.

“Wait. What?” he asks, his brain pushing up from the bottom of the same lake that had recently been drowning my consciousness.

“There’s a chirping noise out in the hall from the smoke detector. It’s been bleating every few minutes.” Then I trot out our household’s most terrifying currency: “I’m worried it’s going to wake the kids.”

Although Byron is less scared of wakeful children in the night than I am, he snaps to and gets that this is a pressing matter if we want to avoid a kitchen full of cranky whiners in the morning. Marshaling his forces, he thinks through the situation. “There are actually three smoke detectors on this floor of the house–one in each bedroom–and also a carbon monoxide detector in the hall. It could be any of them. Have you noticed where the chirp is coming from exactly?”

Every single day, my husband teaches me. Abstractly, I knew some nice men had come a few years ago to remodel our kitchen, and while they were here, they also updated the smoke and carbon monoxide detectors throughout the house. Once they took down all the hanging sheets of plastic and drove away in their trucks, though, I got distracted by the new cabinets and forgot to look up and see what they’d done elsewhere. In my defense, if I look toward the ceilings, I see all these cobwebby things that someone should deal with. It’s better to keep my gaze aimed forward, really.

Helpfully, I answer Byron while sweeping an arm wide. “I know the noise is coming exactly from out there. Not in here.”

We decide to listen for the next chirp with an ear to specific location. As I listen, I realize both my pillow and my husband’s back are very soft.

We wait. And wait. Some more.

Because we are wide awake and ready to figure this thing out, there is nothing but silence.

After a few minutes, Byron throws open the covers and wanders into the bathroom to relieve himself, at which point a chirp from Could Have Been Anywhere resounds loudly.

How frustrating. But as long as he’s up…

Coming back into the bedroom, Byron grabs his headlamp. He straps the thing to his head and goes out into the hallway, ready to narrow down the possibilities.

With the stoic patience of a Scandinavian type in his forties, he stands there quietly, leaning against the banister. In his underwear. Wearing a headlamp.

He just stands, quietly, his eyes clapped on a six-inch space high on the wall. Waiting.

Eventually, I hear him yawn, and even though there’s nothing I can do, I can’t take it. I hoist myself from the bed’s warmth and join him in the hallway. I ask if he’s able to reach the detector, should he need to, or if he’d like me to run downstairs and get the step ladder. Thankfully, his legs are step ladders all on their own, so I am safe from the threat of exertion.

There, by the banister, we stand together and stare at the plaster. Come on, you damn thing: chirp so that we know it’s you. If it’s not you, then it’s time to bust this process into the kids’ rooms.

Silence. Obviously, our focused attention has made the thing shy. Trying to fool it, I begin to look around. The only thing worth looking at is Byron, all tall and leaning, shirtless, in his underwear, the headlamp an unexpected accessory to his ensemble. He wraps his arms across his chest, warding off a shiver.

Cripes. He is the cutest.

He stands there in his headlamp and underwear, the perfect foil to an unpredictable, ridiculous thing, and somehow it’s a metaphor for our marriage. All my own unpredictable ridiculousness ever needs is him, standing there unwaveringly, ready to deal with things–all the better if he’s in his underwear and a headlamp as he does it.

After a few minutes, freezing, I return to bed. As I lie there, willing the detector to chirp, the shadowy image of Byron, still leaning against the banister, makes me smile. When we got married, I thought I knew him. Our years together–fifteen!–have schooled me, though. There was no way for me to know that the 28-year-old anthropology-major-turned-naturalist that I married would

teach our sixth grader how to play cribbage so that the kid could feel confident when his new elective class in that game started;

attend cross-country banquets with our ninth grader, willingly spending hours making small talk (which he hates) in the presence of a pasta buffet (which he hates) because he delights in the community she’s found;

become a literacy volunteer at an elementary school for a minuscule monthly stipend because the work matters;

take up blackwork embroidery at age 43 as he continues to explore the various permutations of being an artist;

train our kids’ palates with his excellent cooking, to the point that they’d rather have a dinner of groundnut stew or Thai curry than spaghetti;

tell me every few days, “I like you so much”;

hear my point more than my fumbling words so that I always feel innately understood;

stand in the hallway in his underwear and a headlamp at 4 a.m., hoping to catch a wayward chirp.

Eventually, after silence reigns for a few more minutes, Byron surrenders and returns to bed, but not before checking the supply of batteries. We’re short on the nine-volt version, which he’ll need the next day when he changes out the batteries in all the warning systems. Then he snuggles under the covers, and we chuckle, knowing the offending detector, wherever it is, will be issuing a tweet any second.

As the minutes pass, the house is quiet. Dark. Still.

It sighs a little, as do I, when Byron drops back into sleep and emits a gentle zzzzzzzz.

I lie there for a long time–like a nursing mother listening for her baby’s cry–expecting another chirp. It never comes.

There is only Byron,

the soft skin on his back, 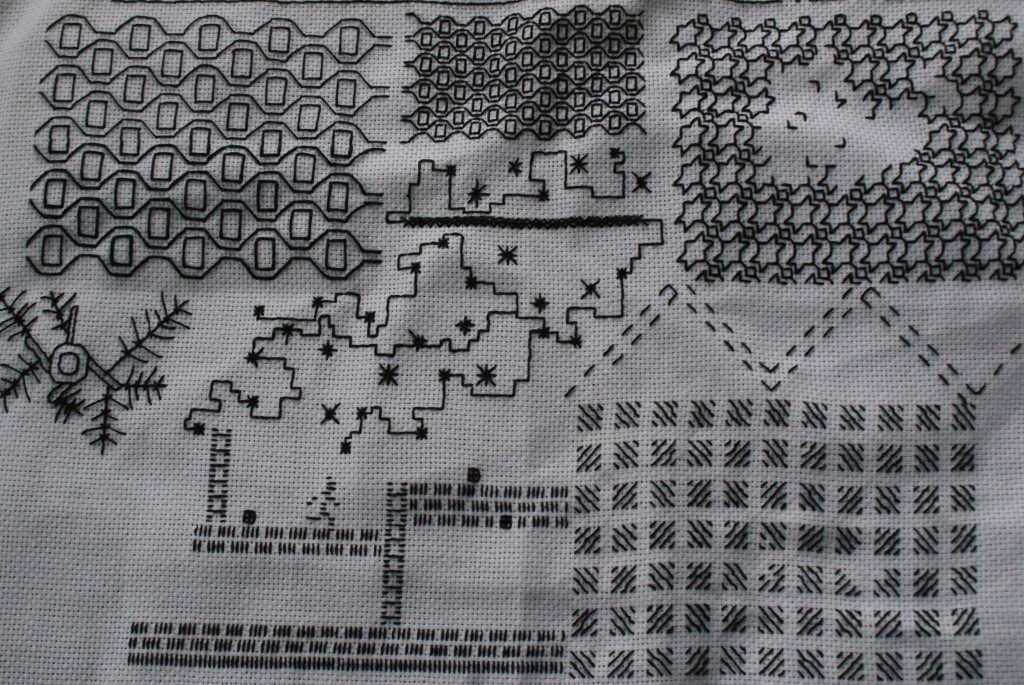 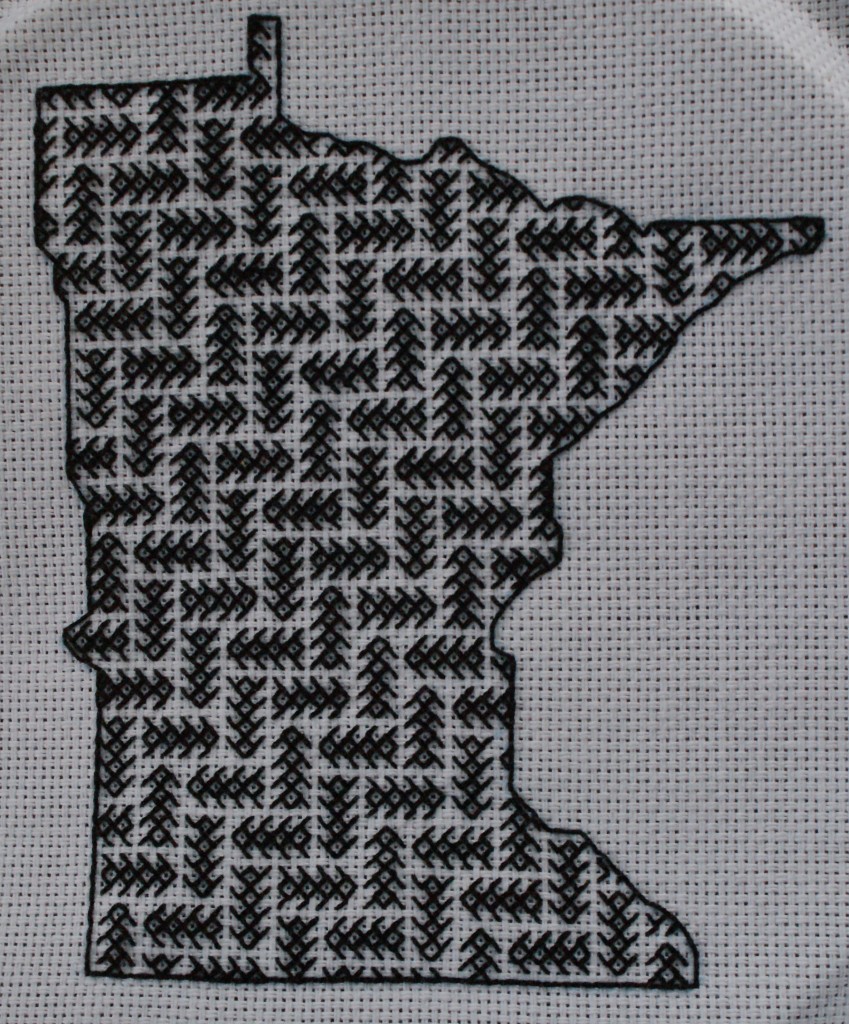