Roughly 30 hours after waking up and hopping onto the shuttle to Istanbul’s Ataturk airport,

we pulled into Duluth.

A delay (we sat on the plane in Paris for 2 1/2 hours before it ever left the ground) caused us to miss our connection in Detroit and ultimately added about 6 hours onto our final travel time.

Fortunately, the plane from Paris to Detroit was a newish one and–Holy Things Unheard Of–actually agreeable. Kirsten had booked us “comfort” seats, which means we had a lovely bit of leg room. For once, Byron’s patellas weren’t rubbed raw, and I was able to cross my legs and occasionally scootch my aching cootch. Just as gratifying were the personal screens (something low-rent Delta doesn’t regularly offer); anyone who remembers that one of the highlights of my year in Turkey was watching the 1980 version of the film Fame on our flight over will understand that I’m a complete kid on Christmas morning when it comes to a personal screen.

What I learned from this most-recent trip to Turkey, thus, is that I like Girls because Lena Dunham looks like a real human being; I like New Girl because Zooey Deschanel is properly charming; and I adore Veep because Julia Louis-Dreyfus has managed to land on yet another show that gains power from the geling of its larger cast. Such is the wisdom of this world traveler. Oh, and also: the Seljuks surely knew how to decorate the hell out of a doorway. I know that, too.

Wait. There’s a third thing, too. I found out that the Turkish phrase for “so-so” is “söyle böyle” (which is pronounced kind of like shooley-booley, and how fun is that? Once I learned that phrase, I was compelled to wend my way through the Spice Market in Istanbul and tell every single vendor in every single stall that his merchandise was söyle böyle. In a dramatic lesson of cause-effect, I fled the Spice Market that day at a speedy clip, chased by a hoard of angry men wielding plastic scimitars and bars of rose oil soap).

In sum, then, what I learned from this trip to Turkey is:

–a thousand years ago, Seljuks were comfortable enough in their lives that they could spare the time and energy to rock an entrance 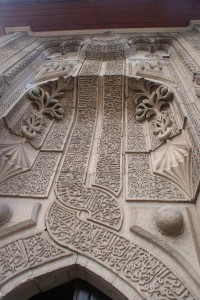 –this man may look innocuous, but he’s more than söyle böyle when it comes to waving a plastic scimitar in a threatening manner 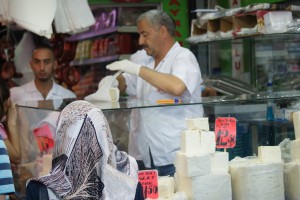 Now, the trip is over, but the memories, the sounds, the smells, the textures, the photos, the things learned–all are still churning through my jet-lagged head. Sitting here in my quiet house, listening to the dishwasher churn, rocking gently in my chair, I also remain incredibly glad that I thought to turn on the video camera a few times. Here are a few examples, a few cross-sections, if you will, of the delights visited upon us:

Our last meal in-country was purchased from a rice pilaf (aka “pilav”) cart on the Galata Bridge. After loading a little plastic tray with pilav, the vendor tops it with shredded chicken. Although there isn’t much talk in this video, my heart gets very happy when the overlapping Calls to Prayer start issuing from all corners of the city:

In addition to buying pilav that last night, Byron and I went on a long after-dark walk around a few of Istanbul’s hills. We planned to walk by the famed Suleymaniye mosque, which we’d not yet seen. When we got there, we realized the doors were open, and people were still visiting, so we wandered in:

And finally, from the Friendship Files, our pal Elaine (who, in a previously-posed video, explained the items on her breakfast table) here analogizes Turkish tea to a family:

my passport’s still out on the dining room table. My underwear has been laundered. I’m a day away from complete jet-lag recovery. I could sell some plasma to earn extra income.

One could make the case

I’m ready to go back.