Zowie, but the kid was a screamer.

First, she had colic, a condition that also made me cry a lot. Poor Byron would desperately knead my hand, pleading, “What can I do? Just tell me what I can do.” That’s what it looked like as I read his lips, anyhow. For all I could hear, he might actually have been saying, “Do you have a hoe? Joe has a nice rainbow.”

Some months later, half-deaf and -dead from the colic, we attempted sleep training.

After an exhausting week, our ears blistered by her all-night crying, having followed all instructions to the letter, we roasted marshmallows over the sleep training books as they disintegrated into ashes. Then we pulled our girl into the bed with us. Instead of teaching her to say prayers before we flipped off the light, we taught her to flip off Dr. Ferber and leave the lights aglow.

Then, a year beyond that, Allegra got her first splinter.

I’m sorry, did you say something? My left ear isn’t back to full functioning yet because of the part where our two-year-old got a splinter. I also have this one knee that has a hitch in it–maybe a floating bone chip–since one of us had to pin her down bodily while the other one dug around for the offending bit of wood. To be frank, our toddler put up such a fuss that we were fine with leaving the thing in and allowing an accrual of pus to work it out, but Sweet Louis Pasteur I can’t tell you the screaming when we announced that option. So, really, I’m sorry if you’ve been talking to me, but you’re going to need to speak up.

Then, when she was four, after an evening of playing with a ball in some tall grasses while we clapped for Daddy Doing a Trail Race, she came home hosting four ticks looking to set up their sleeping bags in her warm, moist crevices. Once I laid my body over top of hers, and Byron started plucking them out with a tweezers, plaster fell from the ceiling. One report had it that the tide in the Bay of Biscay reversed direction for a short time.

When she was seven, something called The Shark Game was being played on loose gravel. She slipped. The skin on her knee was torn open, and the wound filled with dirt and gravel. The clean-up, which I can still tell you occurred on Sunday, April 22nd, 2007, at 1:34 p.m., involved a modicum of drama.

A few years later, her Girl Scout troop took a field trip to the hospital to look at the babies in the newborn unit, and Allegra fainted.

By the time the girl finished elementary school, we were tired, bruised, deeeeeef, and more than a little afraid of her. She possesses immense charms, most certainly, but when it comes to anything “of the body,” the kid has always been a Tasmanian Devil. Or unconscious on the floor.

Thus, although I’d like to think that all possibilities are still open to our now-14-year-old, I can confidently state she’ll never be a doctor, nurse, phlebotomist, EMT, or maintenance worker in a health care facility. If we discuss someone else’s illness in the abstract, her knees get weak. On occasion, she’s half-joked that she’d like to have children but isn’t sure she could ever deal with pregnancy and delivery. We’ve done some initial counseling on the merits of adoption.

Mostly, I accept that “freak out at matters of the flesh” is part of her wiring. She’s so steady and laid back about all other things that this shrieking hand-flapper of a mother can’t begrudge her daughter the right to run a little hot when it comes to skinned knees and blood.

This trait has been such a part of her since birth that my brain struggled to catch up the other night when she walked in to the room carrying a whiteboard upon which she’d written: 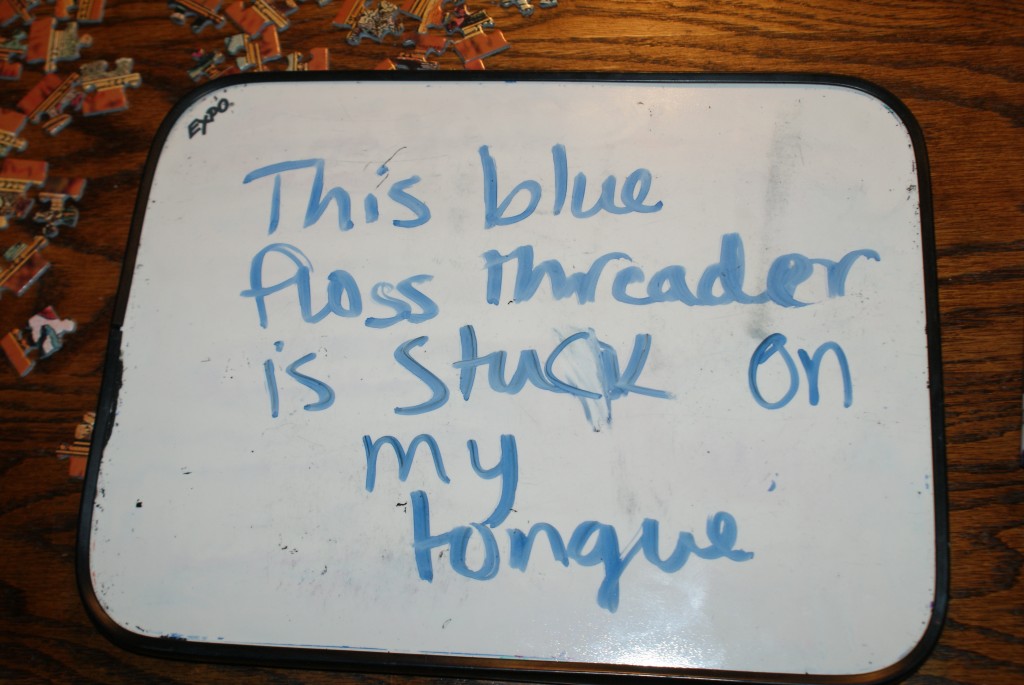 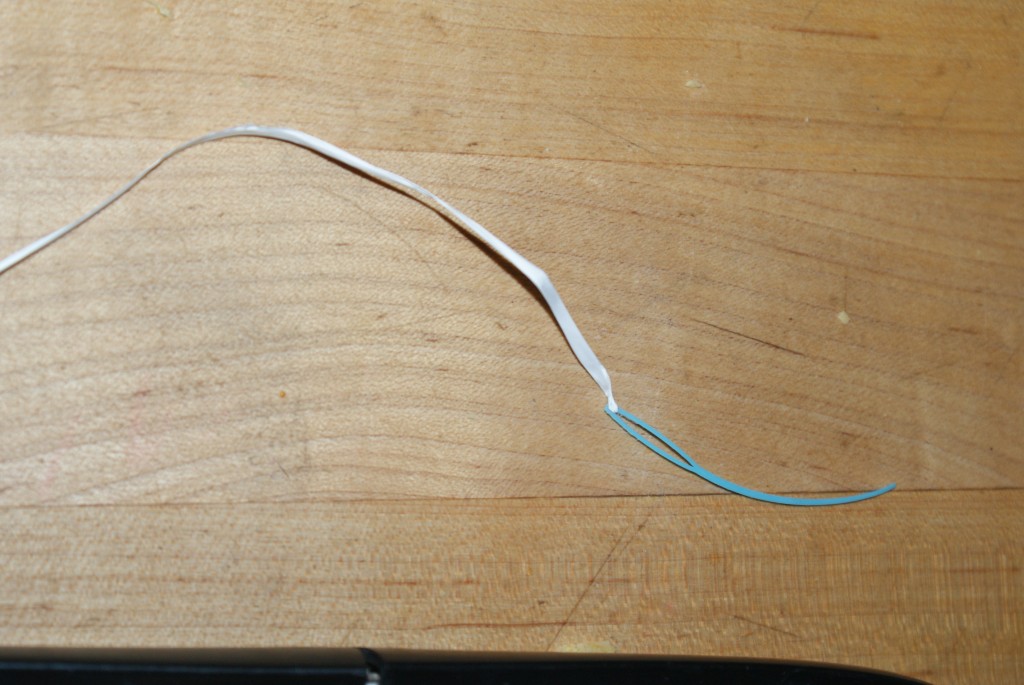 To get a sense of scale, compare the blue floss threader to the whiteboard: 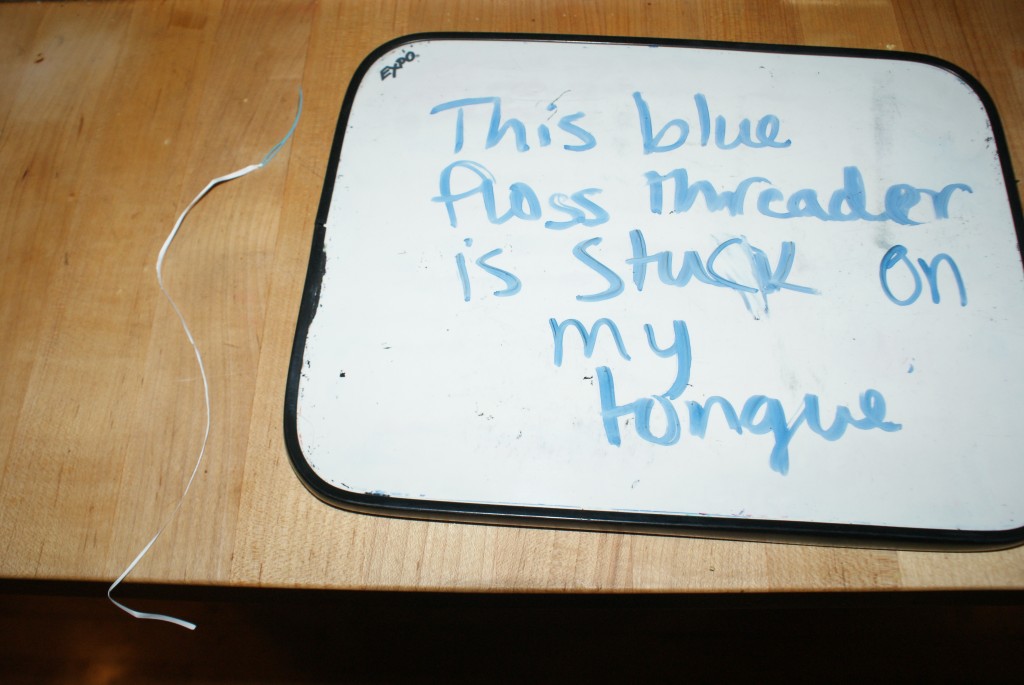 With the same intensity that she’s recoiled from bodily issues, our girl as always loved a whiteboard. So fun! So multi-functional! So capable of sending out an S.O.S when one is unable to speak BECAUSE A BLUE FLOSS THREADER IS JAMMED THROUGH ONE’S TONGUE!

The explanation for how that happened entails one of Jocelyn’s Patented Random Rambles. Bear with me. Okay, so some of you must have watched The Dick Van Dyke Show at some point, right? In one episode, Mary Tyler Moore’s character of Laura Petrie takes a bath; while in the tub, Laura notices that the faucet has a drip hanging from it, so she puts her toe to the faucet to “play” with the drip. Her toe becomes caught in the faucet opening, and classic comedy ensues.

In Allegra’s version of this scenario, the drip was a wily chunk of orange pith, and the toe was a blue floss threader. The faucet opening should have been the space between her teeth but had become, in a huge moment of “whoops,” her tongue.

Adjust this picture so that the nose is a tongue and the bone is a blue floss threader. Yea, like that. 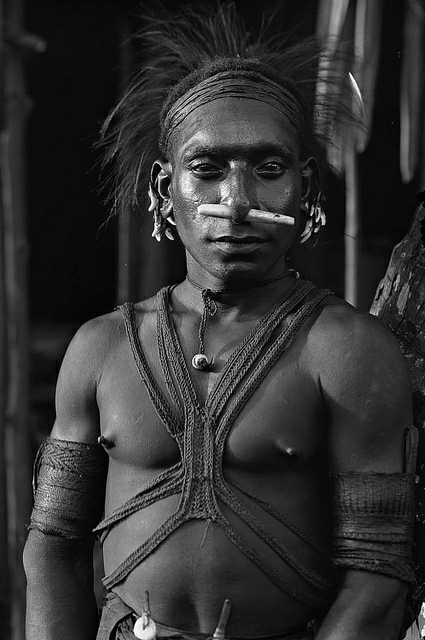 Byron and I read her whiteboard message, but it took a minute to figure out the meaning. Even when we sat, agape, and stared at the end of her tongue where the flosser threaded through her taste buds, it still didn’t quite sink in.

The tears in her eyes helped convey the message, though.

Fortunately, the flosser wasn’t too deeply embedded–more sewn into the tip–so pulling it out could be done at home, by us. I immediately went into Splinter Mode with her, suggesting she sit between my legs and let me hug her while Byron worked the thing out.

I suggested she sit or lie down, and I would work on it, so gently it would be like a unicorn’s sigh floating by on a cloud.

It’s not wrong of me to have had a flash of gratitude that she was virtually unable to speak, is it? ‘Cause by extension: no screaming.

As I tried to get my eyes into her mouth, to see how much flesh would have to be broken, should we have to pull it out forwards instead of easing it out sideways, she stridently waved me off. NO. NO. NO.

Teetering somewhere between hysteria and control, she let me accompany her into the bathroom.

There, I unleashed another one of my patents, something called “Soothy Voice While Imperceptibly Rubbing Lower Back,” as she stared into the mirror and considered the options.

[Full disclosure: patent is still pending. Do not steal my idea, you effers, before it gets approved. We need the money.]

She put her hands into her mouth, withdrew them hastily, and, as a hail of tears fell and bounced off her cheeks, she started working at the thing. Then she stopped, produced some Novacain-sounding speech, looked wild-eyed, and put her hands back in.

This went on for several minutes. The tears were perfect beads, almost plinking as they landed in the sink over which she was leaning. Mixed into the tears were a few moments of laughter. How could we not laugh? Could anything be more ridiculous? Several times, I offered to help. At one point, I noted that we might have to cut a very thin layer of the top flesh off–softly, not aggressively–to free the flosser.

So I rubbed and talked, much the same way I snared my first boyfriend.

Eventually, slowly and painfully, she did something. And it worked. The flosser came out.

No one fainted. No one screamed.

As is always the case when I witness my kids being more than they knew they could be, I fought back emotion. Instead of bawling at how damn proud she should be of herself, because in so many ways she’d just defeated more than a piece of plastic embedded into her soft tissues, I went light.

“Good Lord, my girlie girl. I just had a moment here, watching you cry and laugh and get down to business, all at once. You better believe it: I just had a moment where I realized that if you ever decide you want to, you’ll absolutely be able to deliver a baby. If you can pull a needle out of your tongue, I’m pretty sure you can handle childbirth. You have grit, chicabell.”

Later, Allegra gave me her analysis of why she’s always been such a screamer yet was able to handle this latest. The way she sees it, all the other injuries of her life weren’t actually painful, so her brain was able to go wild and ramp up the drama. But when something genuinely hurt, as did the flosser, she needed to deal with it, all nonsense aside. The pain kept her brain grounded.

Ultimately, after watching her lurch her way through that crisis, I was full of admiration: not only will this young woman one day be able to deliver a baby, should she so desire, she’ll also make one hell of a mother. And if she never has a child, never becomes a mother, that’s great, too–

because she’ll be there for herself.

12 responses to “The Ultimate Splinter”