I sat in the stylist’s chair, getting my mane snipped.  As another tuft of hair floated to the floor, the stylist made conversation, asking, “So what’s it like, parenting a 14-year-old girl?”

It was a nominal question, meant to fill time, to keep us from silence. Even before I responded, the stylist anticipated the tone and content of my answer; she knew it would strike a note of exasperation before veering into a rant and closing with a sentiment of “Thanks for letting me vent. I guess I needed that.” Instinctively, the stylist knew I would roll my eyes while detailing the

Indeed, much has been made of the difficulty of adolescence and adolescents. Stereotypes and lore have it that teenagers are difficult, snotty, full of attitude. With a box of Kleenex and a bottle of vodka at the ready, we treat parents of teens with something like pity, asking about their daily lives with careful concern, anticipating responses of

However, at the risk of sounding smug, this mother of a (nearly) 12-year-old and a full-on-14-year-old had to break it to the stylist that

she’s not feeling the pain.

Unquestionably, I’ve never liked my kids more than I do currently. Some of this has to do with me:

I wasn’t cut out for the quirkiness of infancy;

I didn’t always excel at the unrelenting physical demands of toddlerhood;

I often longed for the hours to pass more quickly when they were preschoolers;

I happily stuffed them onto the school bus during the elementary years;

and somewhere along the way, they became interesting individuals who surprise me with their competency, intelligence, and humor.

Because I like interesting individuals and being surprised, their adolescence thus far has been great fun. As well, perhaps because I’m an arrested juvenile myself–and aren’t we ripe with jokes about “arrested juvenile”?–I gravitate towards teenagers. At family or holiday gatherings, I’d just as soon sit in the corner with the high schoolers as the adults. Maybe it’s that I’ve taught college students for so long, or maybe it’s that teenagers are a flossy batter of bright-eyed possibility stirred with dawning potential coated with a sifting of goofy energy. It also helps that they very much like talking about themselves and I, despite this blog’s massive evidence to the contrary, have very little desire to talk about myself. Every social interaction is blessedly less exhausting if I can ask a question and then settle in to listening to the answer with little threat of equal self-disclosure expected in return. Teenagers are masters of this dynamic, and I love them for their complete lack of interest beyond the toes of their Uggs.

Then again, I’m being unfair. My kids, while appropriately self-absorbed, display significant interest in the world outside of themselves. The girl has always been fascinated by how those in other countries live. She enjoys books because of the people watching they allow her.  Frequently, she asks, “So how was your day?”

Also (because I’ve decided to truly commit to the GIFtravaganza that is this post), here’s evidence of an external awareness. First, she is all teen: playing cute, looking to garner attention while the camera is on. Out of nowhere, she bombs the video:

In performing her elfin leap, however, she manages to whack Byron. A mere nanosecond after she thunks his back, she is sorry. It’s so sweet, so indicative of her true character; I could watch her apologetic hand pat a thousand times.

Similarly, Paco breaks the stereotype of adolescence. Yes, he can be moody, even sullen, but I’m proud to say those traits will always be with him–they are not a phase that will fade away once his body is fully washed with hormones. Primarily, and this too will accompany him throughout life, he is kind. For example, if I mention to him that my back is sore from unaccustomed swimming yesterday, I know he will offer to give me a massage. He is unflaggingly lovely to his peers; we continue to marvel at how safe and secure all kids feel with him. He notes when his teachers have had a tough day and wonders what might have caused that. He is interested to hear about the foibles of my students, mostly because the stories make his jaw drop. Like his sister, he is already aware that people’s lives exist outside his.

It’s an endless source of gratitude for me, being able to like my kids so cleanly and deeply.

In recent weeks, they have given me even more fodder for The Liking of Them.

Allegra currently loooooves Taylor Swift. We’ll not hear a word against T-Swizzle in our household, in fact. Once ticket sales opened for Swift’s upcoming concert (9 months from now), we went through a day-long emotional journey, as tickets sold out immediately but then became available through the racket that is a ticket outlet seller. There are few things our girl wants, but seeing Taylor Swift in concert is one of them. Although the outlet had marked each ticket up by about 50%, Allegra was undeterred in her desire to get. to. that. concert. Ultimately, even though we’re paying for a bit of her ticket as her Christmas present, she is still shelling out the equivalent of 28 hours of babysitting to cover the rest.

In addition to that, there was the matter of Taylor Swift’s birthday. On that day, Swift’s website generously offered up free shipping on all merchandise. Since Allegra lives in a state of perma-fangirl, she could not ignore this opportunity and snapped up another 14 hours of babysitting’s worth of goods.

What’s more, Superfan Allegra also spent the afternoon of Taylor’s birthday baking brownies for her idol. She went through minor agonies when it came time to spell out “Happy Bday” in M & Ms and “Taylor” in sprinkles. 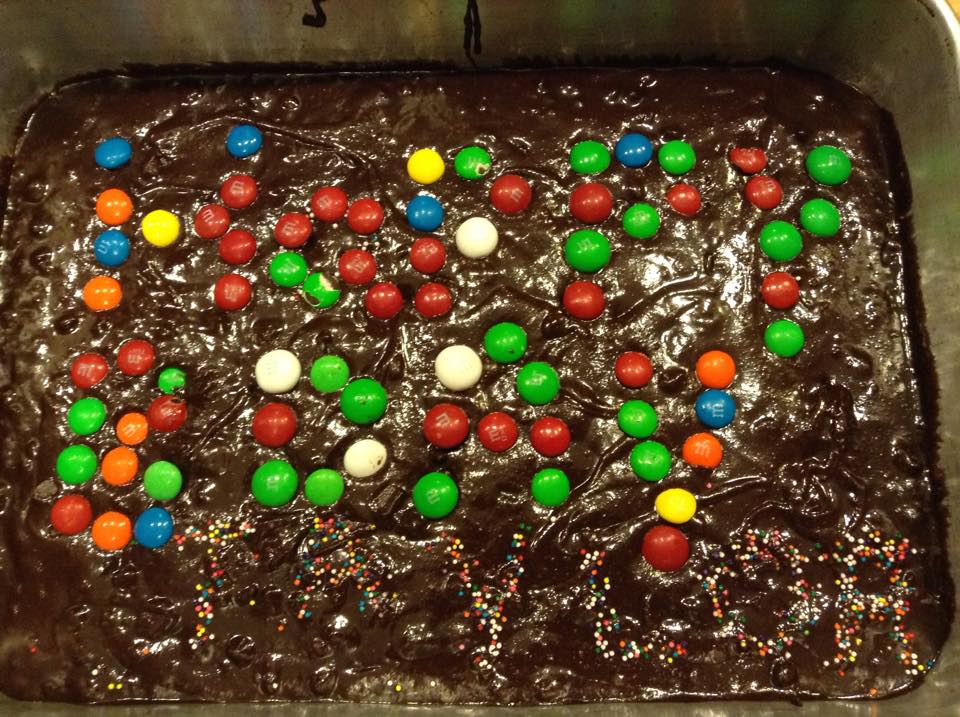 The entire Taylor-based production took me back to my own years of fangirling (Oh, Steve Perry, that replacement front man for Journey is serviceable enough, but his vocals are thin trickles of water compared to your rich creme brulee), years which, to be honest, continue because Jimmy Carter, Willie Nelson, and Ruth Bader Ginsberg already.

At any rate, to have a daughter who baked brownies for Taylor Swift’s birthday is a source of great delight to me.

I am similarly delighted by Paco’s passion for narwhals. They’ve really been a “thing” for him the past year or two, and his love continues to grow.  Appreciating soft buddies, he would respond excitedly to a plush narwhal, but those I’ve found online aren’t worthy. Fortunately, we have a talented friend who is into sewing small creatures, and she allowed me to commission her skills for the narwhal you see at the top of this post. Paco has yet to see it, as it’s tucked away until his birthday next week. With great confidence, I can tell you that this narwhal will have a most-excellent life.

Thanks to  Paco, a real-life narwhal will also benefit from greater protection. You see, before the holidays, the kid got really quiet one day, the sure sign of a brain at work. Then he asked, “Don’t Oma and Grandpa Jay usually make some sort of donation for everyone as a gift, like buying chickens or a goat for a less-fortunate family?”

“How much do they usually donate?”

“Oh, that’s PERFECT. I’ve been doing some research, and for that amount, they could make a donation and adopt a narwhal in my name. Could I ask them to do that?”

“And if I get to name the narwhal they adopt, I was thinking Rutherford sounds perfect.”

And so it happened that on Christmas morning, young Paco’s delightful wish came true. After opening his gifts, he laid them out, proudly displaying photos and cards from the World Wildlife Fund of Rutherford, the planet’s most-beloved narwhal. 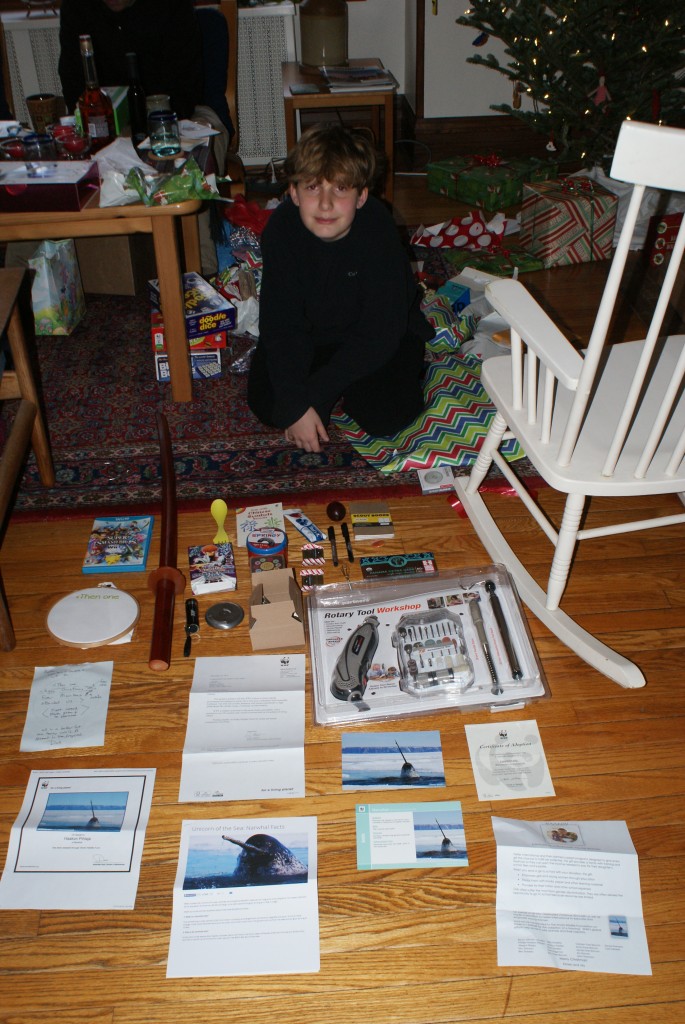 I didn’t tell the stylist about adopted narwhals or birthday brownies for Taylor Swift. Even though she would have heard those stories and thought my kids were “cute,” they are so much more than that.

They are human beings in the midst of one of life’s most difficult stages, yet they are grand. For that, I not only like them; I respect them.

They make me want to sit in the kitchen and watch them forever.

13 responses to “They Delight Me”