Twelve Days of Summer with My Twelve-Year-Old: DAY FIVE 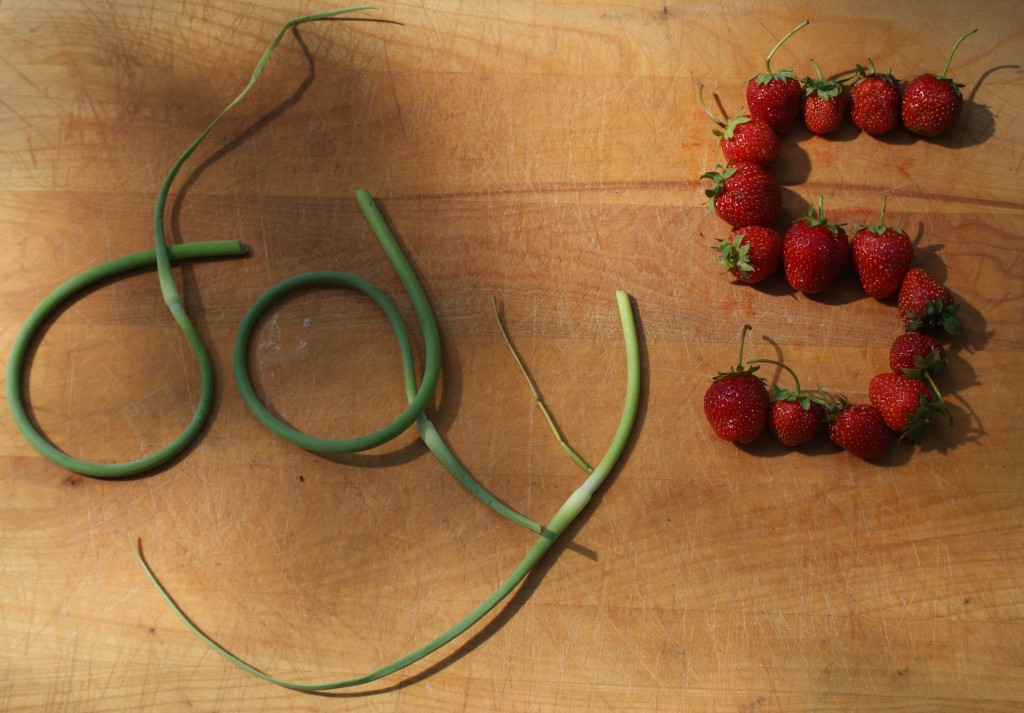 On the fifth day of Summer(mas), my middle schooler gave to me: five bike bell dings

Byron stood in the lobby of the YMCA, trying to get members to sign up as volunteers for a community-outreach event.

He does such things frequently.

I am certain his noble works compensate for my tendency to stay home, speak to no one, and dig through a jumbled kitchen drawer, looking for the corkscrew. The good karma he’s earning extends to the whole family. Of this I am sure.

In fact, it was in our wedding vows: “I, Byron, promise to go into the world and do good things, so you don’t have to.”

Still proving up on his vows some fifteen years later, he stood there in the lobby, an “Approach Me, Please” expression plastered to his face, fielding questions about the upcoming event: cleaning up an abandoned lot in the “tougher” part of the city and then celebrating with a game of kickball.

His duty-bound Saturday morning brightened when an interested woman in her mid-fifties stopped. However, she didn’t put her name on the clipboard; all she volunteered was support: “Oh, I really believe in community service. Everyone should do more. I do my part with the little plastic baggies that are attached to my dog’s leash. I clean it up whenever she makes a Winnie the Poo!”

Using precious language for something gen-u-ine and fearsome is a stock Midwestern trait. When an eighteen-year-old is spotted vomiting into a nice Iowa lady’s hostas, she’s likely to announce apologetically, “Aw, he’s schnookered!” When an idiot licks a pump handle in January and has to rip off a chunk of his tongue to break free, leaving splotches of blood in the snow between the pump and the house–INCIDENTALLY ALL MIDWESTERNERS HAVE PUMPS AND YOU WOULDN’T BELIEVE THE LICKING–the standard assessment of such lunatic carnage goes, “Well, bless his heart.” When Grandpa has a heart attack and, on his way to the floor, grabs at the stove and inadvertently turns on the gas burner, and then an hour later his grandson, Thor, walks into the house and lights a cigarette, and the entire house explodes, scattering limbs and scrapbooks all the way from the wood pile to Lake Wobegon, a Midwestern mother will later park her four-wheel-drive in the garage out back, grab her shopping out of the trunk (new liners for her Sorels), and then, on her way up the walk to what used to be the house, realize that she’s staring only at air and a chaotic scattering of moose tchotchkes made out of birch bark. Surveying the empty expanse where her home used to stand, this Midwestern mother, Pauline, will simply squeak a limp, “Uff da!”

By now, after almost half a lifetime in the Midwest, I should be inured to these linguistic habits. Yet. Whenever I’m watching the local nightly news, I still wince as the meteorologist forecasts high winds, heavy rains, and severe weather while using the term “thunderboomers.”

That’s what a toddler does in his Pull-Ups while screwing up his face and turning red, right? He makes thunderboomers?

Thunderboomers can only be thunderstorms, no feces about it.

We’ve had a lot of thunderboomers this summer; the skies have been unstable, unleashing pounding rain every couple of days, soaking the earth, muddying the trails, overworking the sump pump in the basement. On the positive side, this means fire danger is low. Surrounded by lush greenery, our only hint of dry crackles is the haze that has hung over the region, floating down from wild fires in Saskatchewan. On the negative side, these summer storms, alternating with sunny days, have resulted in a thriving lawn.

Also thriving is my hatred of lawns. While I particularly object to them in places where green grass isn’t natural (HELLO, THE WESTERN HALF OF MY COUNTRY!), I pretty much dislike them everywhere. The basis of my gripe is this: lawns want my attention. I want to read books. And the twain shall never meet.

Due to the consistent rain, every few days I look out the window or walk to the car and cast my gaze towards the yard, at which point my name changes, and something straight out of Thomas Hardy happens: “Ethelberta breathed a sort of exclamation, not right out, but stealthily, like a parson’s damn.”

I stare at that shaggy lawn I mowed a mere four days before, and every (*parson’s damn*) blade of grass waggles at me, mockingly. Really? Again with the mowing?

Does Grass not realize that if it would agree to stop growing, I would have time to read more Thomas Hardy? Or, to put a finer point on it, any Thomas Hardy at all, beyond what a quick web search yields when I’m writing a blog post? Does Grass not realize that we here in the house not only hate lawns–we also hate gas, and therefore we use Ye Olde Fashioned push mowers, powered only by our rounded biceps and smoldering rage?

Cagey Grass realizes all and cares exactly zero; deaf to our grumbling–almost as though it has no ears–Grass sucks up the moisture, applies its chlorophyll to the mission, and channels some badass Jack and the Beanstalk mojo. Ten million green buggers reach for the clouds and a goose’s golden egg. Every four days, Lawn is so tall it can no longer hear my wails of protest, even when I take out a megaphone and use my best teacher’s voice to command “Stop it the frick right now.”

(Note to self: maybe, come fall semester, try out that command with the yahoos who populate the back row of the classroom whenever they wander in late, ask loudly if they missed anything, and then spend the next 42 minutes texting under their desks.)

(Follow-up note to self: No. Do not use that command. If you do, the yahoos–those students who struggle to get their bodies to a classroom–will buzz a startlingly quick straight line to the dean’s office so as to lodge a complaint about their hurty feelings. Rather, tamp down your desire to tell them to “Stop it the frick right now” and, instead, let them hang themselves with their own behaviors. Also: begin giving pop quizzes that last exactly two minutes, from the tick on the clock when class begins and lasting precisely 120 seconds. When Tweedles Dee and Dum mosey in eight minutes later, those quizzes will already be collected and registered in the grade book. Sample question from one of Jocelyn’s First Two Minutes of Class Pop Quizzes: “What did you have for dinner last night?” True story.)

So all these thunderstorms are raining on my reading parade.

They don’t do Paco any favors, either.

Loaded with sensitivity, the lad dreads a storm. So many frightful flashes piercing even closed curtains. Too many loud BOOMS rattling the window frames. As it happens, most of the storms blast across the big lake during the nighttime hours, when sleep-disrupting cracks and rumbles stop the heart, spur the nightmares, cause the somnolent to sit up straight and yell, “Whozzitnowbumblebee?”

Thus, just before bedtime every night, Paco asks, in his endearingly respectful way, “Could I go online and check the forecast?” Yes, honey, of course. And while you’re clicking around, could you swing through Zappos and order Mommy a pair of Danskos?

If foul weather threatens, Paco sleeps in the basement. As he readies for bed, he turns into Steve Martin in The Jerk:

Feeling nervous, a bit anxious about the storms heading our way, wearing his new bathrobe, he gathers unto him Many Important Items of Comfort before hunkering down for the duration. There’s a book. Or two. A book light. Ear plugs. His complete diva of a stuffed cat, Star (pronounced “Stawww”). Maybe a special pillow. Possibly a pair of minion glasses. Potentially a little gewgaw found in a geocache box. 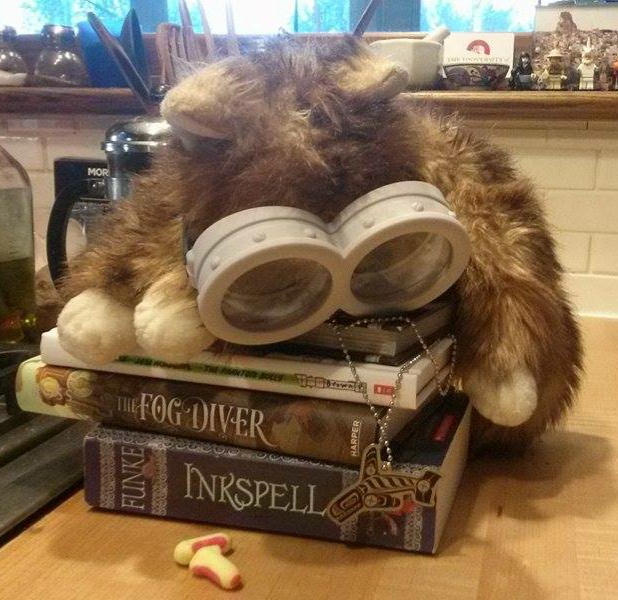 Then, well equipped to ride out the loud noises in the sky, Paco heads downstairs to bed.

After reading for awhile, he falls asleep. When, some hours later, I descend the stairs to join him–carrying my own pillows, a glass of water, a book, and earplugs–I stop mid-way down. Standing there on the stairs, clutching my Many Important Items of Comfort, I gaze at my sleeping kid.

Sleep softens him, removes all traces of his deepening voice, his legs that ache with growth, the worry about his hair. Sleep makes him three again. His stuffed kitty has fallen onto the floor. His arm above the covers is plump, the elbow dimpled. His cheeks, whisker free, look like cream; I know if I stroked them, they’d feel like velvet.

I don’t stroke them, though, lest he wake and lurch upright with a fearful “Whozzitnowbumblebee?”

Instead, I continue down the stairs, grab Star from the floor, and set him on top of my three-year-old-who-will-be-twelve-again at sunrise.

The next morning, Paco wakes, refreshed, and creeps out of the basement so as to not disturb his sleeping mother. He makes himself some breakfast, dons his beloved bathrobe despite the July heat, and settles in front of the computer he made at “Build Your Own Computer” camp. There, completely oblivious to the mess that is his room, he will play, fight, maraud, troubleshoot, contemplate, and become lost in imagination. Although daylight makes Paco twelve again, the three-year-old lives inside. 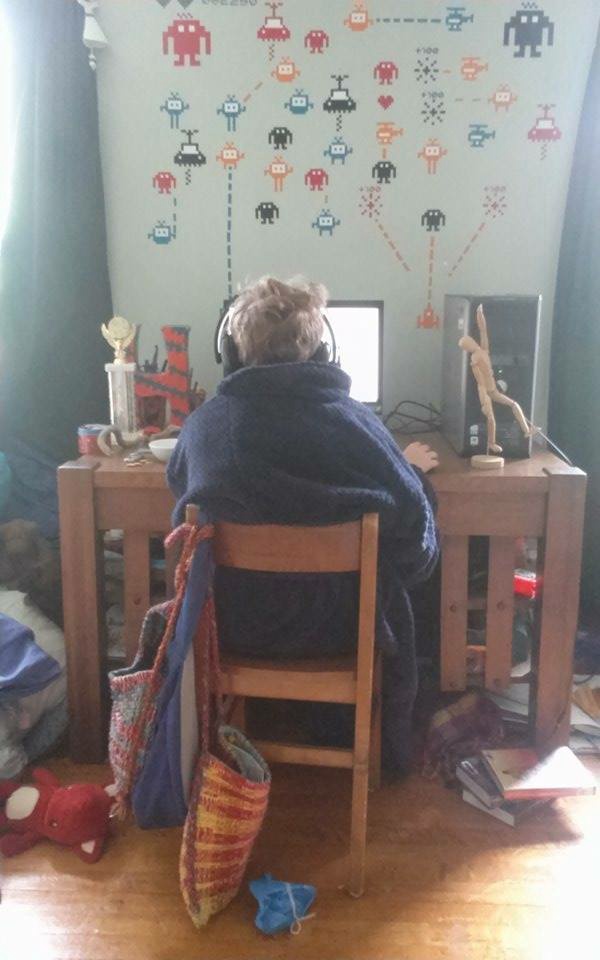 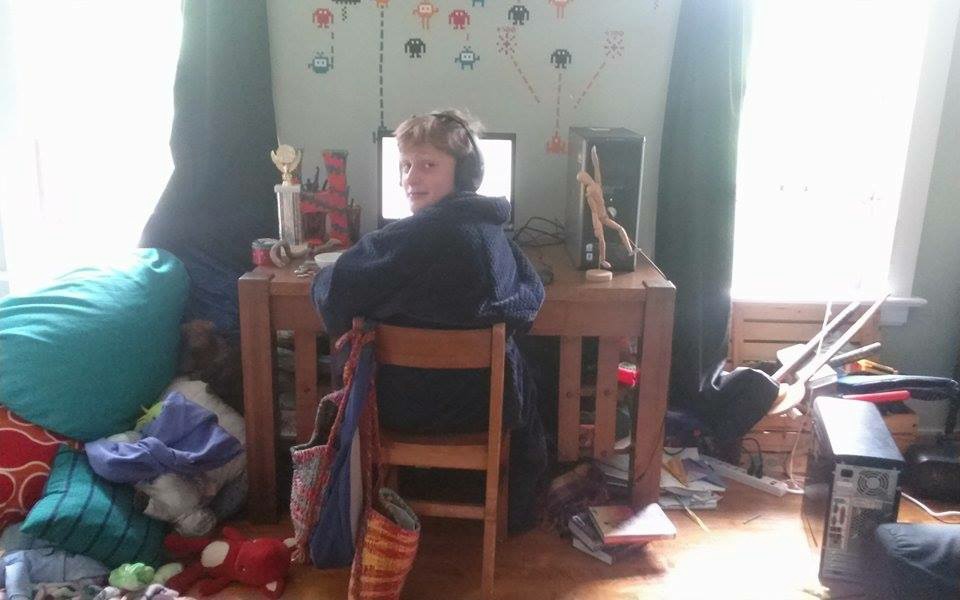 Eventually, perhaps at 3 p.m., he gets dressed. We go for a bike ride together. At the end of our ride, after we park our bikes in the garage, I moan, “Dang. I don’t have the clicker to close the garage door. I need to run inside and get my keys, so I can unlock the side door and then push the button to close this thing.”

With that, he dashes into the garage, pushes the button to close the garage door, and races towards me, hurling his 5′ 5″ out and under the closing garage door. As soon as he gets to the door, though, it stops. The magic eye, which detects blockages at the front of the garage, has detected him. The door won’t close if he breaks the beam of the magic eye.

Disappearing again into the garage, I hear him whimsically ding the little bell on my bike’s handlebars. Then he pushes the button again, and this time, when he gets to the magic eye, he’s not only crouching due to the lowering door, but he’s also hurdling. He leaps out, undetected.

Grinning hugely, he declares, “That was so much fun! It’s like doing an obstacle course!”

Admiring his ingenuity, I pat his back as we walk towards the house, discussing whether our afternoon coffees will be served hot or iced. We’re in agreement about one thing: we need the caffeine boost.

It had been a tough night, what with all the thunderboomers coming through.

5 responses to “Twelve Days of Summer with My Twelve-Year-Old: DAY FIVE”