There’s a special lull in the rhythm of the semester when students are cranking away on big projects and readying themselves for the intensity that is the End of the Semester. The work isn’t flying in because they’re diligently, one hopes, doing the work. I’m in that lull right now, swinging and swaying and trailing my fingertips across the surface of the water as the rowboat drifts.

Ah, were it that relaxed. Rather, I view this lull as the only time I have to prep for next semester, which, in online teaching, means going into each course “shell” and getting sixteen weeks’ of content, quizzes, announcements, grade book items, and discussions ready for January. In courses that I’ve taught before, this is a fairly rote process of changing dates, swapping out stale activities, rearranging some due dates so as to create better flow, updating references, and the like. It takes some hours, but the meat of the class is already in place, having been copied from a previous semester.

A new online course creates a radically different time demand, however. With a new course, the “shell” is completely empty and makes the instructor staring into that space-loaded-with-potential feel like a person who’s just bought a parcel of land and now needs to design and build a house upon it before the first snowfall. The prospect is exciting and terrifying and a benefaction and a curse. So much is possible. Too much is possible. Only the application of myriad hours dotted with beads of sweat and a few fits of weeping can move the work forward, in lurching fashion, with a step forward and three back and a jump over here and a stumble over there.

Honestly, the only part of this that’s a complaint is the sheer amount of time it takes to frame up even a few metaphorical partition walls. I actually adore curriculum design; it may be my very favorite part of the job. But getting even the basics of an online class in place can take 60 hours, 70 hours, 100 hours, depending on how detailed the instructor is being during the prep phase. For me, I prefer to do a lot of the heavy lifting before the class begins; once the class goes live and has students in it, that’s a whole new dimension of work and demand, and I prefer to be focused on those needs rather than the “under construction” sign hanging on the class Content page.

Since I have two new online classes that start in January, in addition to three I’ve taught previously, I’ve been hammering away at getting one of them, Modern World Literature, constructed. Hence, my lull isn’t so very lull-ish, really. It’s been fun, however, to make some videos, write some quizzes, explain literary analysis. All of the time I’m putting into the one course means, UGH, that I haven’t yet thought about the second new course.

Enter my heroic colleague who offered me her version of that course. She’s been teaching it online for sometime, and it’s no skin off her beak to have her course content copied into my class shell. This type of course sharing has happened between other instructors on occasion, but I’ve never benefited from it before–partially because I like to design my own classes (isn’t that a significant part of teaching?) and partially because I’m a crusty loner (professionally speaking) who doesn’t consider it part of the job description to feign interest in colleagues while standing in the mail room. Seriously, I haven’t the faintest idea how to respond to a gaggle of 60-year-olds who went to the Cher concert at the convention center. When they chatter with excitement about the concert, I just stand there and wonder, “You guys really paid a bunch of money to hear Cher SING? I mean, did you know what you were getting into? Had you perhaps never heard her singing voice before?” Five minutes later, when they’re still going on about it and comparing who sat in which section and who bought a t-shirt, all I can think is, “I could have been reading a book all this time. For the past seven minutes of my life–which I’ll never get back–I could have been engaged in something that means something to me.”

So, you know, people haven’t exactly been tossing their classes at me; they’d have to find me first, and I’ve become pretty adept at a skulk. This time, though, the offer to share came, and it came from someone who is particularly special to me. I feel humbled by her generosity and as though I might need to add a 24″ x 28″ poster to the shrine for her I’ve erected in the corner of the dining room. I know she likes mustard, so I set out a new bowl of it each day next to the incense. One thing my guru always bellered before passing out was, “There. must. be. no. skin. on. the. top. of. the. mustard. in. a. shrine.” Daily fresh mustard it is.

But really. Isn’t her offer something to be thankful for? Isn’t her offer rather in the spirit of the season, when so little seems authentically to come from a place of giving?

Certainly, I’m going to switch up her class a fair bit and inject my voice and style into it, but just having the basics in place will save me maybe 30 hours, hours that I can now apply to things like hanging ornaments on a tree and baking nine million molasses cookies. I might even see my husband between now and January, thanks to her.

So my weekdays have a predictable routine, built around coffee, exercise, dealing with current teaching, and working ahead on next semester’s classes. This past weekend, with the U.S. having Thanksgiving, mixed up that schedule a bit, though. Although it’s hard to be completely present sometimes in Life That Is Not Work when one is an online teacher, since assignments and questions are flying in every minute of every day, I have to say I enjoyed the respite from thinking up quiz questions.

On Thanksgiving morning, Allegra ran the city’s Gobble Gallop 5K, as did a couple of my cousins and their kids, so the holiday started off with a feeling of family; these cousins are, in many ways, as much siblings as cousins to me, so any time spent in their orbit feels easy and natural. 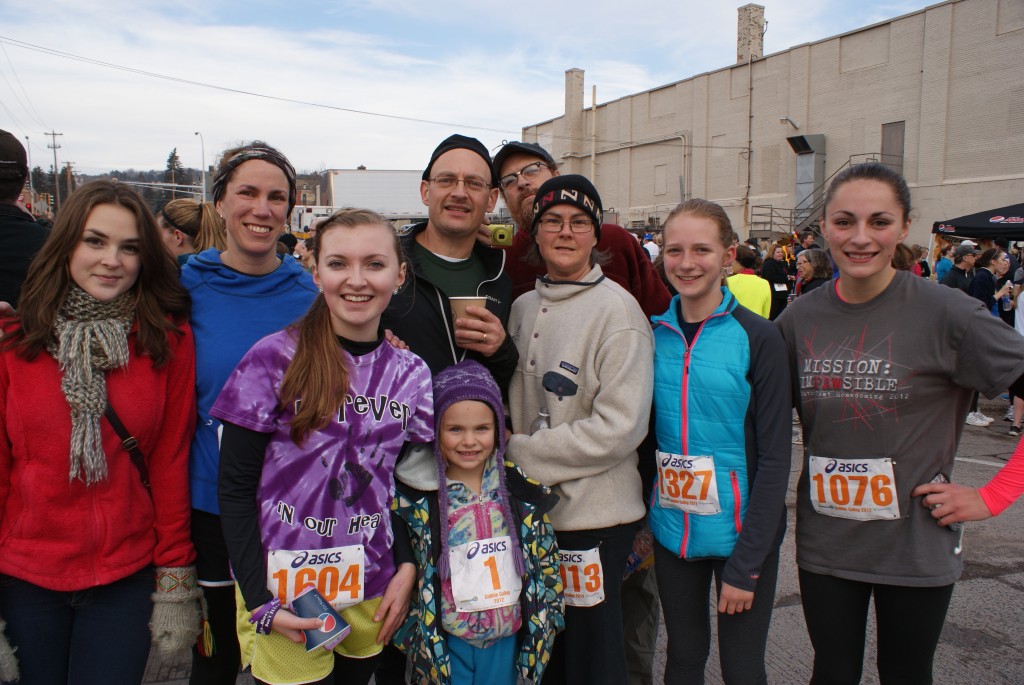 Below, three of my cousins (brothers to each other) have a quick confab. I love this photo primarily as a study in comparisons and contrasts amongst siblings. Raised by the same people. Nurtured in the same environment. Sharing many of the same values. Profoundly different human beings.

As their choices in headgear indicate. 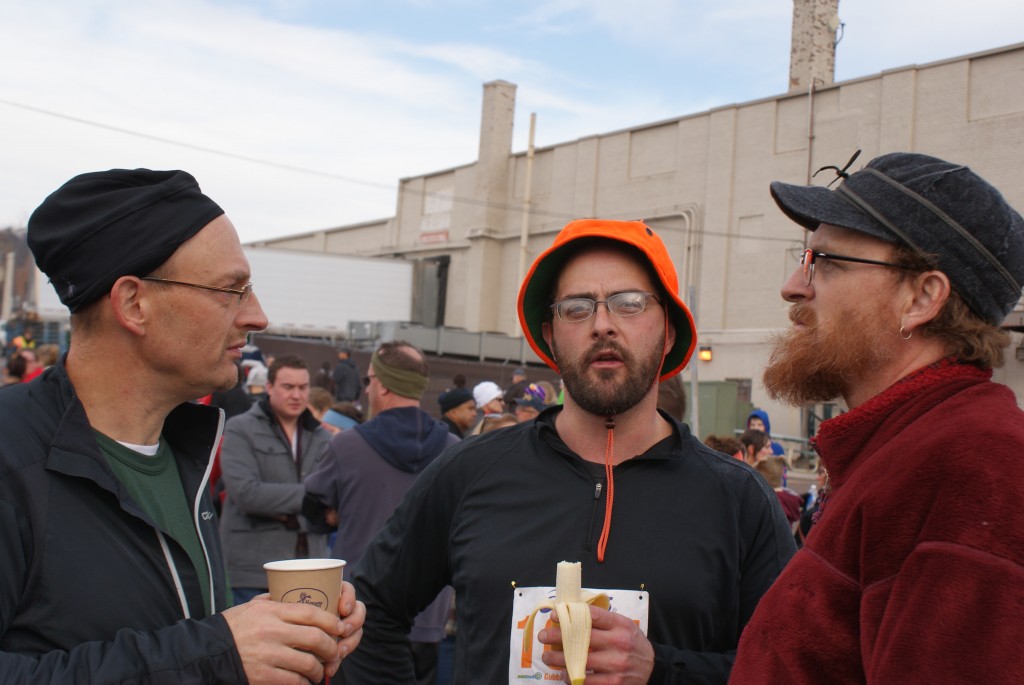 Next: here’s my girl. Every time she runs, she looks calm and happy and as though she’s not even trying. I gaze upon her, in awe, recalling how I used to walk most of the 1/2 “endurance run” during the Presidential Physical Fitness Test. I was 31 before I ran a mile.

She is 12. She just goes. In so many ways, what was hard for me is easy for her. She’s like a healing balm spread over my own childhood wounds. 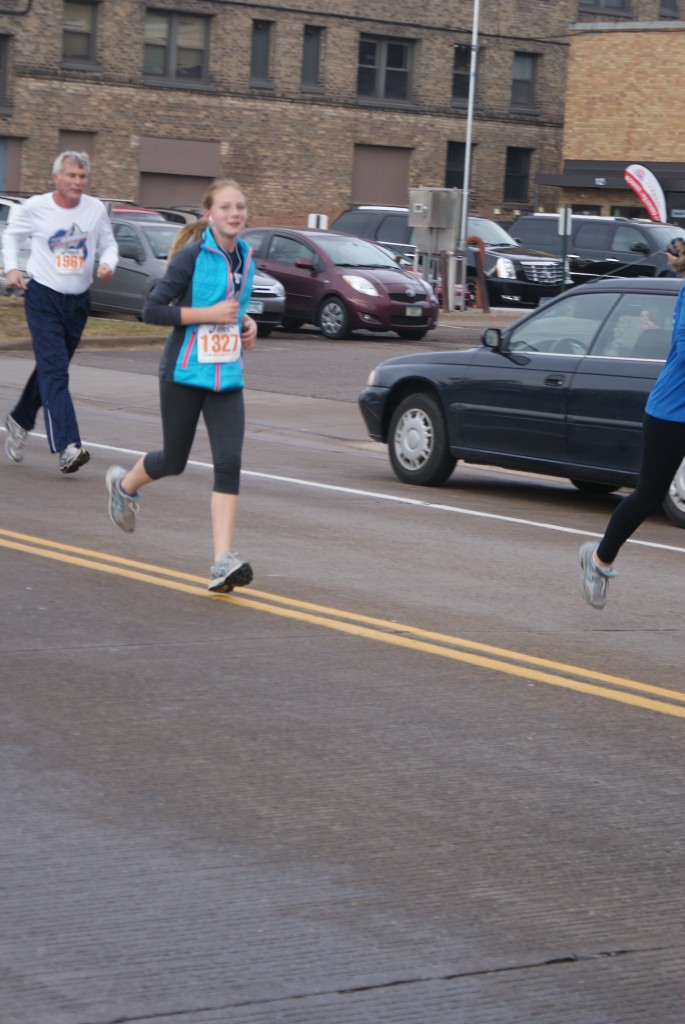 After the race, we packed up and drove four hours south, to the town where most of Byron’s family lives. Seeing the beauty of his sister as a mother, enjoying the charm of her two-year-old daughter, realizing how far my own children have come, well,

I hardly remembered that I’ve only written one opening announcement for Modern World Lit and still have 15 more to go. 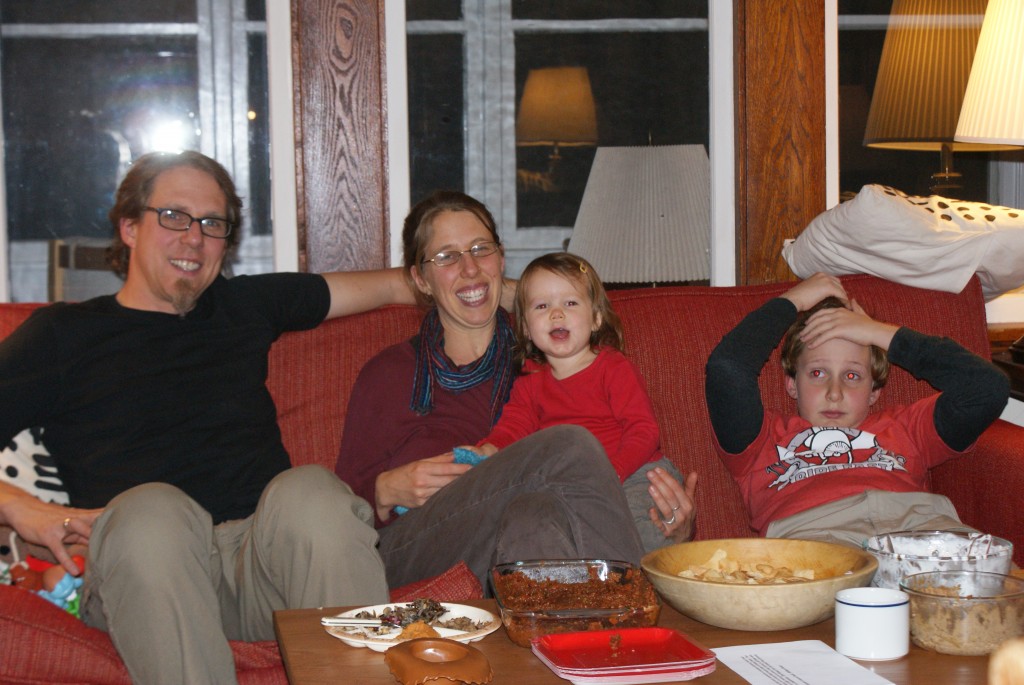 A couple days after Thanksgiving, we celebrated both the two-year-old’s and Byron’s birthday (hers was last week; his is this week). More than anything, that gathering proved that the transition of seasons is upon us. The winds were frigid, and when we brought the camera in from the car to snap a picture of candles being blown out, this is what it managed: 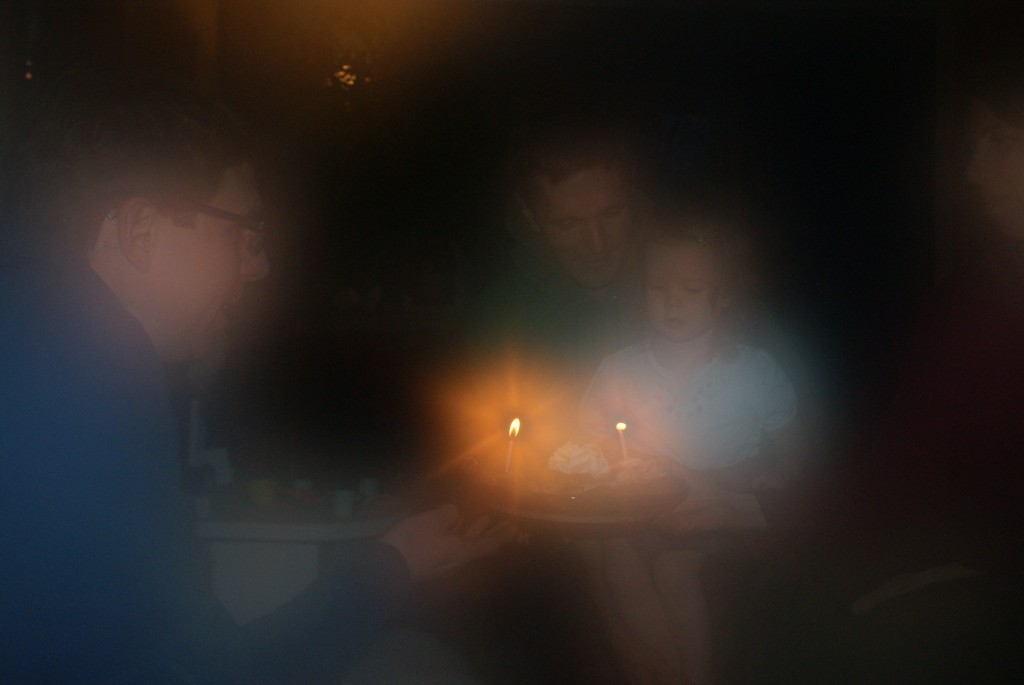 It’s kind of like those being celebrated live in a dreamy, fuzzy, foggy world of dim lights and scents of sugar. I can get behind that.

Once the fog cleared, a few presents were handed around. If you see a two-year-old coming towards you clutching a Fisher Price blood pressure cuff and stethoscope, brace yourself. You’re about to get the physical of your life. 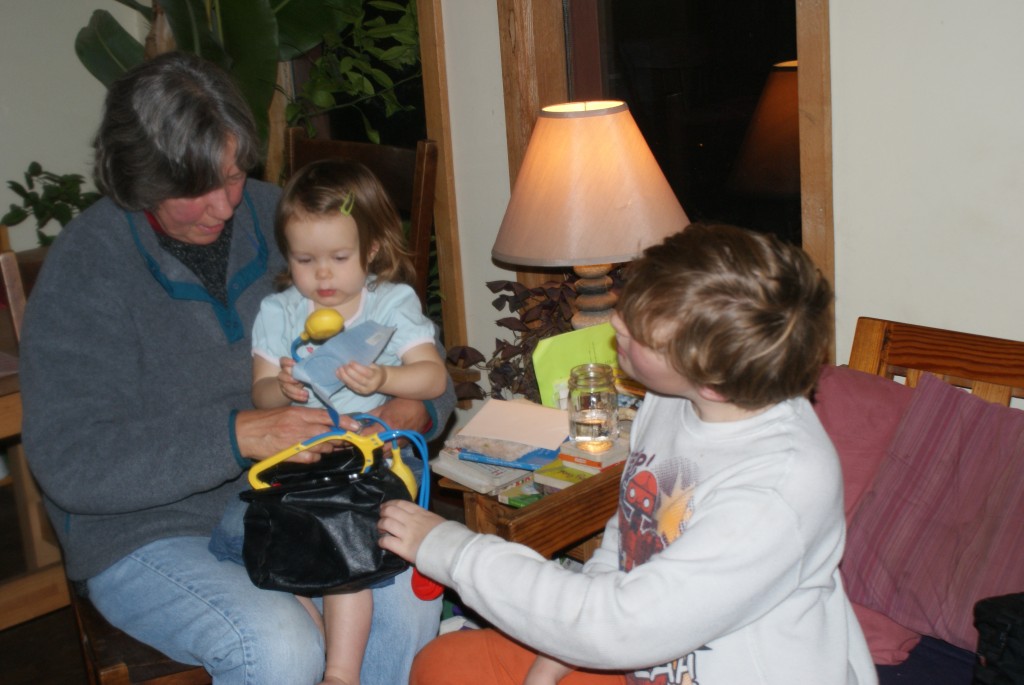 Because Byron’s parents had been suffering from the stomach flu (Happy Thanksgiving!) and were still feeling a little fragile from the afterglow of vomiting, we opted to drive back to Duluth a day early, which was lovely.

Because the seasonal transition had hit hard up in the Northwoods. A gorgeous blanket of white covered everything, and suddenly, while it’s still Autumn,

So excited was I by the fun inherent in snow and breaking out the winter gear, I completely forgot to worry about my lack of author links on the Content page of Modern World Lit. 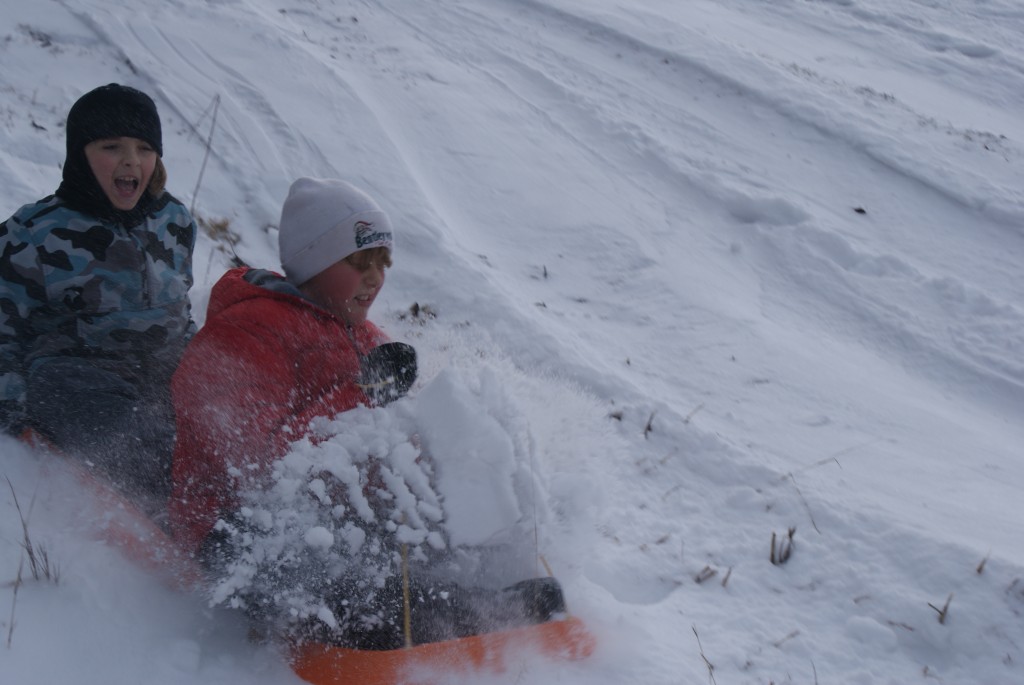 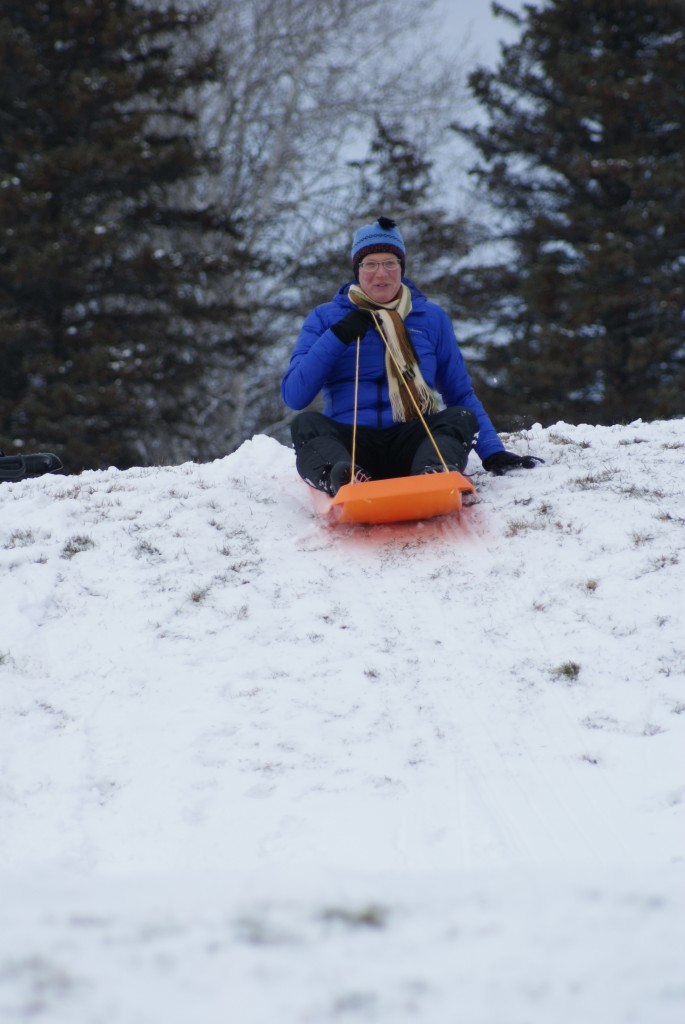 So occupied were we, heading to the sledding hills (bonus: neighbor boy!) and throwing ourselves down the slopes, 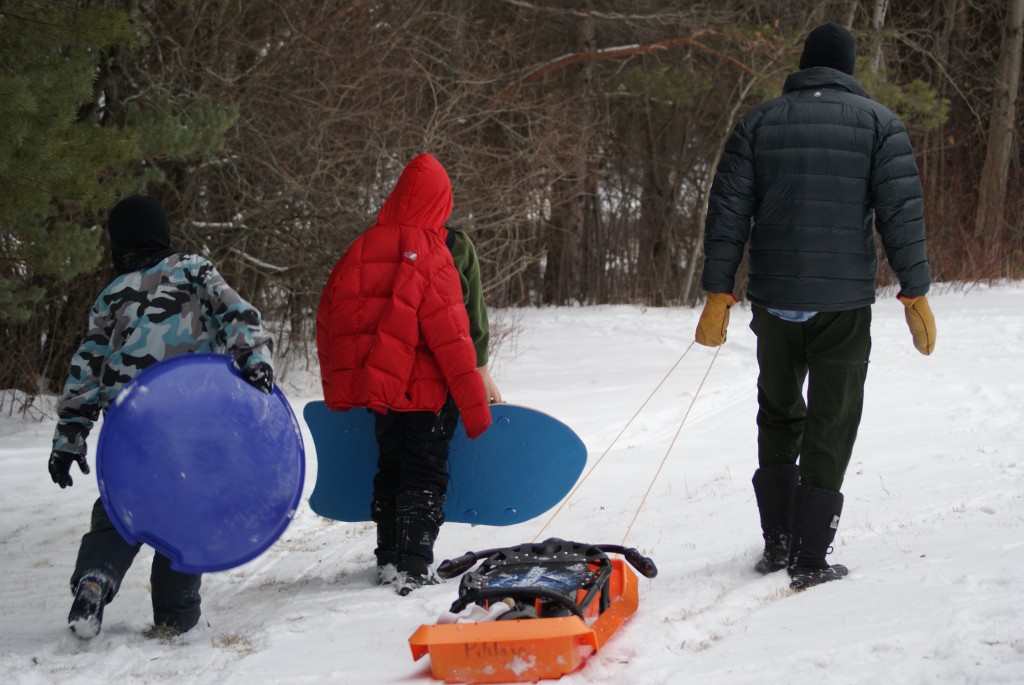 that the lack of an assignment sheet for the mid-term essay melted from my mind.

Turns out, the lull created by a long weekend was honored.

I am officially lulled.