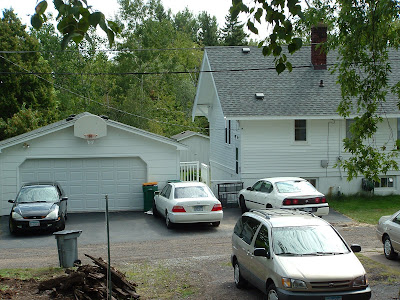 It was the yapping that yanked me to consciousness.

But what doggie? All previous yappers had met their fate as Main Ingredient in Jocelyn’s Yippy Puppy Stew (oft-requested at local potlucks). So what was this odd barking noise that was killing my snooze?

In the rental house.

Before I adulticized and became a homo-wner, I had no sense of the fear that the word “rental” could strike into a mid-life, quietly-contented heart. When I was a renter, during the Jagermeister Years, I never had the faintest notion that my lack of investment in a neighborhood, or in the quality of life of those around me, might be a bother. Parties were my right, as was coming and going at 2 a.m., car tires grinding in the gravel. Life was all just me and my peeps, doin’ our bang thang. Rhythm was a dancer, and my days were all about good vibrations. That my vibrations resonated sloppily onto anyone else in the two-block radius was so far beyond unthinkable that it took the light from Unthinkable two thousand years to reach my orbit.

But now. I live in my sweet place with sweet neighbors, and we like our family-life vibe and our quiet.

Not so much the renters. In the four years that we’ve lived next to the rental, we’ve witnessed the sad family with Abusive Daddy, he who hollered at his kids that they were “worthless f**ks”. We’ve had the Snaggle-Toothies, telemarketers who smoked out by the garbage can on Sundays (game day!) while dressed in full Vikings football regalia. We’ve had Baby Daddy, who broke up with his girlfriend right about the week their baby, Liberty, was born.

The latest, them responsible for Yapping Doggie Stewmeat, are five 18-year-old boys, all on the cusp of their first term at college.

The yappy wake-up happened about a month ago, on a day when the first of the lads was moving in to the house with the help of his father, sister, and BroBuddy. Trying not to be passive/aggressive, I straightforwardly and, in a psychologically-healthy manner, channeled my peevishness into a carefully-phrased note (“I don’t mean for us to get off on the wrong foot here, but it seems fair to let you know that your dog, while perfectly happy when you’re around, seems to get loudly and unrelentingly distressed in your absence…and if there’s anything we all can do to help with training or making your dog feel more comfortable during the long hours that you are out of the house, do let us know”), which I then tacked to their screen door with a bloody, cyanide-laced dart.

Twenty minutes later, First Boy and his posse—burping up eggs and waffles–pulled up, ready to continue to unload the moving truck. I was working in our garden, hugging the carrots a bit, which gave me a fine vantage point from which to watch the reading of the note, which spun them from bewilderment to incredulity to defensiveness. Right as they rounded the corner to “Geez, what a bitch” territory, I stood up, startling them all, and hied across the alley. I introduced myself as their new penpal and started gladhanding and gerrymandering and do-si-do-ing. Before you know it, we learned that First Lad, a thick-necked creature named Kyle, was entering the fire fighting program at the college where I teach. All his impending roommates, too, would be attending what I like to call my college.

Kyle looked distinctly nervous when I pointed out that I teach a range of required classes that would be hard for all five members of the rental to avoid during their college careers.

Quickly, he assured me that Yippy Doggie Stewmeat was only in town for the day and would be returning to his hometown that night. But, er, one of the other guys would, um, hem, haw, be bringing his dog in a few weeks, when the whole crew moved in.

Then he turned and ran.

After that day, we had two more weeks of blessed quiet, as the rental remained empty, save for Kyle’s futon, lava lamp, and keg-o-liter.

The college term started this past Monday, which meant those far-thinking boys were here in town, in full occupancy, the weekend before.

When we were out of town.

Unable to enforce the idea of No Trespassing, You Frat-Boy Wannabe RatAsses.

Thus, when we pulled up Sunday evening, spent and craving noodles, it surprised us to see our tetherball pole leaning awkwardly as it did. Groom, wide-eyed, started wondering aloud what might have happened to it. But since I’ve taught college kids for 18 years, my gaze immediately shifted to the rental, which lay there stolidly, feigning innocence.

“Looks like someone might have backed a car into it,” I noted, loading and locking another cyanide dart. “Or maybe, it looks like about 200 pounds of simpleton decided to challenge 190 pounds of shirtless drunk to a match.”

Agitated, we unpacked the car and muttered about our intention of stomping over there and cracking some heads, realizing, of course, that tempered feelings find better reception. So I began mulling, trying to find the right forceful language that also struck a chord of diplomacy, so that the next 12 months wouldn’t lapse into an impasse and climate of increasing hostility, wherein our cars are urinated upon every night at 3 a.m. and our sunflowers mauled and scattered around the alley before the lads segue to synchronized beer dives into our compost bin.

As I fought down the pissed-off-ishness, my next door neighbor, Mike, spotted me in the yard. “God, I felt like such a jerk,” he called out.

“What? Why? What’re you talking about?”

As it turns out, neighbors on all sides had become alarmed when the crew of big boys entered our yard during the weekend and started whaling on our tetherball pole, whipping at the rope and ball with a flurry of profanities as they played game after game. Mike was finally the one to go up to the boys and ask, “Do you guys, uh, have permission to be here doing this?”

Why yes, he was told, Jocelyn had told them it was fine. They were in Jocelyn’s class at the college. We all were friends. They had my explicit permission.

While a part of me admired the chutzpah in this audacious response, the bigger part of me immediately began slicing up each lad into stew-meat-sized chunks and adding them to the simmering pot.

So I shifted my mulling into high gear. I lost sleep that night. In a riveting inner monologue that lasted from 1:14 a.m. ‘til 2:24 a.m., I called each renter’s mother and advised her that her son needed her, that she should come right away and stay for some weeks, that she should bring all of her Oprah’s book club selections along and read them aloud to her respective son while simultaneously ruffling his curly head and changing the sheets on his bed–sniffing them for any hint of a spew–that the neighbor lady across the alley would love to share recipes (and phone numbers) with her, ending the entire visit with a firm and public embrace between concerned neighbor lady and college-boy mother.

After a few days of stewing the boys in my mental Dutch oven, I decided to let it go. However, I’m on alert now, crouching at the windows and observing every late-night brake screeching and cigarette butt randomly tossed into the alley. With one small incident, they’ve made me The Crazy Lady With Calloused Patellas.

I give them time. My list of infringements will lengthen. I have the landlord’s phone number.

But best of all: even though I have no one named Kyle in any of my classes this semester, there’s always Spring term.

As it turns out, I can be a very—almost unreasonably, crazily—hard grader. And with all the f-bombs being dropped out in the yard over at the rental, I find myself constantly thinking “F” this and “F” that. “’F’ Kyle” is rather stuck in my head..

Quite elegantly, grades for Spring term will be posted just when the lease across the alley runs out. Bon Foyage.

25 responses to “Foreclosed Without Purchase”