Early on in my career as a person with hair, I stumbled across the option of the beauty college. Generally titled something like Darlene’s School of Cosmetology, such places are, theoretically, win-win for both the cosmetological students and the shallow-pocketed patrons. For nine bucks, customers can get a hair cut from a country girl named Tawny, she who is honing not only her scissor, but also her interpersonal, skills:

Chairbound Client: “Yes, I’m a lawyer. I specialize in family mediation and have recently started to do some pro bono work…”

Her: “My mom totally loves Bono, too! He’s kind of a geezer and all, but so’s she, so there’s a match made in heaven. I totally have to say I only know how to count to seven in French cuz of him. Gawd, my mom played that ‘uno, dos, tres, catorce’ song, like, twelve times a day when I was in middle school.”

At this point, Tawny turns to her fellow fledgling professional cosmetologist, Heidi, who is repeatedly testing the heat of a curling iron by pressing it against her index finger–and, yes, it does seem to be hot, each and every time she recoils–and asks,

“Remember that old ‘uno tres’ song from, like, five years ago? My mom would crank it, and I’d be out back of the trailer practicing round-off flip-flops, and I’d be all, ‘Welcome to the 19th Century, Mom. Ever heard of My Chemical Romance? Like, get with the times, lady!’”

In response, Heidi puts down the curling iron and starts back-combing her own hair, eyeing her image in the mirror as she replies, “My mom’s even dorkier than that. She likes this singer guy called Eric Clapton, and I’m so, ‘Uh, yea, Mom, you go ahead and clap on and clap off your little Clapton there.’” With that zinger, Heidi picks up a bottle and begins spraying her volumized and baloonified follicles into an unmoving shell.

During this exchange, Chairbound Client has watched, first, with fascination, tutting inwardly, “My, my doesn’t life present a rich pageant?” After a moment, however, CC’s gaze shifts downward to the REDBOOK magazine that was plopped into her lap upon arrival, during the intial “So, what did you want today?” consultation. Finding an article about how to make a five-bean salad that can win over even the toughest mother-in-law, CC realizes that feigning interest in the recipe is easier than pretending to be part of Tawny’s conversation posse.

Just as CC gets to the part of the article where the forbidding mother-in-law compliments the long-suffering daughter-in-law for her beany efforts, Tawny refocuses and pipes up again, her professionalism re-emerging,

For the Chairbound Client, the best strategy at this point is not to engage, not to reveal. Rather, keeping the flow of words focused on Tawny will lubricate the proceedings.

“Oh, sure. But mostly I wonder about how you decided on this career for yourself. Tell me about it.”

A snip and a snap and a brush and a “I just always liked to play with hair” later, the thing is done. CC is released from cape and chair, able at last to pay the nine dollars and head home to wash out the masses of “product” applied to her head, stuff that, instead of adding control and shine, have just made the whole business seem lank and greasy.

But, hell, it was only nine dollars.

——————-
For me, this was the typical I’m Caught in a Hell of My Own Cheapness beauty college experience. But then, when I lived in Minneapolis for a bit, I discovered the Aveda Instititute. Yes, it was still a beauty college; however, it aspired to a kind of grandeur, to turning out more than hair cutters, to graduating salon therapists, to teaching the art of image crafting.

So what if it cost fourteen dollars? My image could get crafted, Dieter!

And this kind of implied I might have an image. Or that there was the possibility of one.

So I went there sometimes, and they gave good hair, and it was all tea and rosemary mint scents each time…until the day I went in, hoping for something special. Some friends and I had a big party weekend ahead of us, and we wanted fun hair…retro hair…beehive-ish hair.

Upon our request, the Institute fell silent. Had bobby pins still been in fashion, we could have heard one drop. Instead, we just heard multiple arm bangles clanking against each other.

“Like, a beehive? You mean, in your hair? Just a minute…” fretted Salon Therapist Carina.

Frantically, she called over her Therapeutic Colleagues, Hansi and Iris. I heard whispers of “They want ‘up-dos,’ and not Prom-type ones. How do we do an ‘up-do’ without baby’s breath?”

Moments later, these words emerged out of their hushed exchange: “We need Lorraine. Run–get Lorraine.”

During our wait for the legendary Lorraine, Salon Therapists and Chairbound Clients all chuckled nervously and stared at each other in the mirror, unsure of how to acknowledge that we’d come to The Best Thrifty Place of Hair, but no one in the joint could create a well-known, decades-old hairstyle. The whole thing was akin to when I read a document written by a fellow teacher and discover he/she has no idea how to use an apostrophe. In such moments, I find myself, quite snappishly, declaiming things like “Stop embarrassing the profession. You either need to know the fundamentals of the most fundamental things, or else you should get yourself to a Target and cozy up to one of their ‘We’re Hiring’ kiosks, where you can fill out your application and pursue a line of work that suits you better, Nutwad. Just don’t answer any questions that might require an apostrophe.”

(for more rants along this line, you can visit my other blog: O Mighty Irrational Stickler)

Fortunately, Lorraine wasn’t long in coming. At the very sight of her, the 1970’s Virginia Slims slogan “You’ve Come A Long Way, Baby” ran through my mind. Lorraine was Old School. Not only was she preceeded by a whiff of polyester, she also had a rat-tailed comb tucked into her nest of hair. A complete anomoly in the Aveda world, Lorraine was the only woman for this job.

“Up-dos, huh?” she asked. “Okay, so the hair of the 1960’s needed a good foundation, girls. Gather ’round. For this lady here, we’ll do some finger rolls, and for this one, let’s do a bubble ‘do, and for the other one there, let’s give her some shape on the forehead as well.”

A crowd of Salon Therapists followed Lorraine’s every move. She threw up some scaffolding on each of our heads and then, gradually, got the trainees involved. Every time one of them would draw back and give Lorraine a questioning glance of “Is this right? Am I done?” she’d reply with “More spray. With a good old-fashioned updo, you always need more spray.”

After much rolling and sculpting and tutting and repeated sprayings, we were done, ready to emerge into the daylight. We paid our fourteen dollars, plus tip (instead of leaving money, I wrote a little note that said, “You’d do well to follow Lorraine through life; if, for some reason, you can’t, I understand Target is hiring”) and giggled our way out onto the street, discovering that our ‘dos had turned us into showstoppers. The feeling continued for three more days, as we rode out the Power of the Spray and slept with our heads propped up on wooden blocks, geisha style.

An added bonus was that even cheap people like me always have a stash of little plastic cocktail accessories in a drawer somewhere. 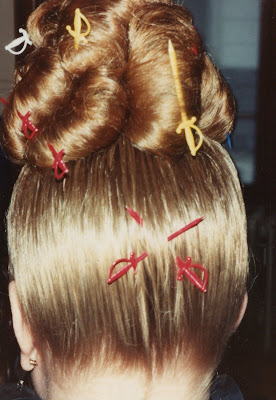 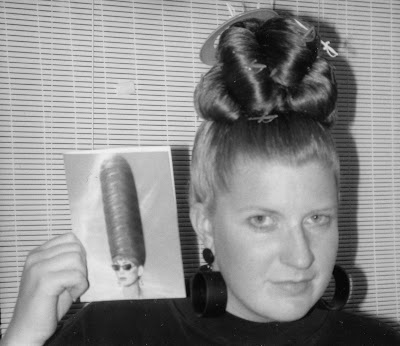 The moral of all this hoo-ha, clearly, is this: if you’re drunk enough, it is possible to sleep with swords stuck into your head.