There’s a famed regional photographer in these parts named Jim Brandenburg; he gets a lot of cred for being the best nature and wildlife photographer around. Admittedly, if you have a taste for foxes emerging from cattails and bison sporting icicle beards, Brandenburg is your shuttershooter. His photos are crystalline and mystical and make me want to put on a parka and eat s’mores.

I posit, however, that Brandenburg has nothing on our resident Groom, who is taking a few more art classes this semester. I already knew he makes really cool pop-up cards and gets charmingly excited up about automata and can scratch out a mean sheep’s head on a board and has managed to sketch a self-portrait that didn’t make me nauseous, but the truth is, despite his versatility, Groom is not known for his photography. In fact, we’ve agreed that I have a more innate photographer’s bent than he. It’s well established that in the marriage, because he’s good at all else, I get to trump at a few nominal things: semi-colons, binge eating, and photography.

Then he goes and takes Digital Photography and knocks both me and Brandenburg right in the telephoto, where it hurts the most. Check out this picture The Groom With the Zoom snapped at the beach up the road: 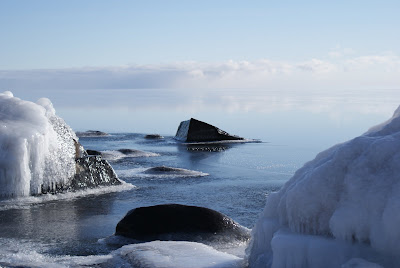 Don’t you just hear Enya in your head when you look at it?

Don’t you kind of wish Enya would stop her breathy cooing for. just. one. minute. so. you. could. enjoy. the. photograph?

Don’t you look at this photo and find yourself believing in selkies and unicorns and fairies and the transgendered?

It’s so clear. It’s just so clear. As I sit here in the coffee shop, scratching my ankle, reading emails, I glance at my husband’s photo and appreciate–yes!–its clarity.

Interestingly, his photo reminds me of a poem I like (one of four, I tell you, one of four, the other three penned by Dr. Seuss), a poem written by W.H. Auden and inspired by a painting of Pieter Brueghel, whom Wikipedia, in its infinite academic-ness, describes as a “Netherlandish Renaissance painter.” 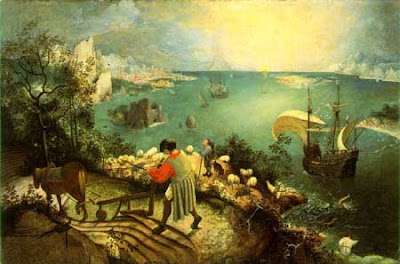 About suffering they were never wrong,
The Old Masters; how well, they understood
Its human position; how it takes place
While someone else is eating or opening a window or just walking dully along;
How, when the aged are reverently, passionately waiting
For the miraculous birth, there always must be
Children who did not specially want it to happen, skating
On a pond at the edge of the wood:
They never forgot
That even the dreadful martyrdom must run its course
Anyhow in a corner, some untidy spot
Where the dogs go on with their doggy life and the torturer’s horse
Scratches its innocent behind on a tree.
In Breughel’s Icarus, for instance: how everything turns away
Quite leisurely from the disaster; the ploughman may
Have heard the splash, the forsaken cry,
But for him it was not an important failure; the sun shone
As it had to on the white legs disappearing into the green
Water; and the expensive delicate ship that must have seen
Something amazing, a boy falling out of the sky,
had somewhere to get to and sailed calmly on.
–1940

See that little crooked leg there in the sea? That’s the thing.

Aptly, the poem points out that there’s bad shizz everywhere, everyday, all around us, but because we’re too busy drinking coffee and scratching our ankles (and innocent, or not-so-innocent, behinds) and checking our email, we miss it. We have our heads turned firmly towards our own business and, thusly, trip blithely past drowning boys whose wax wings melted when they flew too close to the sun. I know I heard a faint splash just last week when I was pulling out of the drive-thru at the Dairy Queen, yet I only stopped licking my ice cream long enough to muse, “Mmm. Yes. A splash of chocolate on this cone next time would be just the ticket to Greater Jocelyn Happiness.” Who knew it was Icarus?

The lessons of Brueghel and Auden are sinking in, though. Already, I find myself setting down my latte, slowing my scratching, closing my email, and looking again at Groom’s photo, to see what I might have missed. 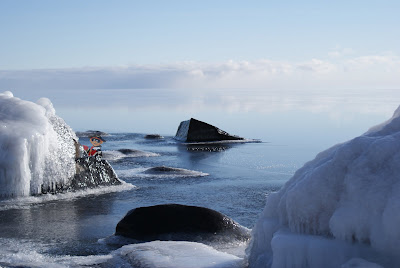 Inspired, I have written my own poem: