…And If the Coen Brothers Won’t Direct It, Don’t You Think Jonathan Demme Could Tap into the Necessary Pathos?

Subconsciously, of course, I had an inkling about the culprit.

Them was animal scats.

Looking at Former Naturalist Groom, I pled, “You used to teach Small Mammals class…so what creature emitted this junk?”

In our marriage, this question is the equivalent of “Does this make me look fat?” in other marriages. The poor male needed to be very, very careful how he answered.

You see, it’s possible I have a wee issue with things rodential. I had missed classes in college due to encountering squirrels on the path; I had called the police when a bat got into my house; I had experienced a mini-nervous breakdown in junior high when the end of my neighbor’s hamster’s tail broke off in her hand (and this, before that same hamster killed and partially ate his compatriot the time I pet sat).

Groom was aware of both my history and my desire for honesty. Thus, he didn’t want to affirm or deny the possibility that a creature with clawed, scrabbly feet, a pointed tale, and a lust for blood might reside within our house.

Cleverly, he drew upon his history of teaching diplomacy to student naturalists and answered my question as he would have the “Does this make me look fat?” query:

What I thought was that it was time to pack my bags and head to a hotel until a team of eleventy-seven pest control professionals had rid the house of every possible rodent, even if they had to inject the place with clouds of toxic gasses that would subsequently cause the fetus in my belly to grow three eyes.

Turns out, what Groom thought was that the drawer was full of something clearly larger than mouse emissions and that they had come from a shrew or a vole. His reasoned reaction entailed not a week in a hotel but rather getting some traps, yet—hello, Einstein Trump–traps do not even come with a swimming pool or air conditioning or cable tv, so where was the fun in that?

Harrumphing, I watched from the corner, arms crossed, while he set a handful of traps later that day. As I harrumphed, I realized that the traps were all in the kitchen, and the kitchen was an essential part of my nocturnal route to the bathroom. I couldn’t get to Bathroom without Kitchen. Hmmm. Suddenly, having considered the logistics and realizing Kitchen Bypass = exploding bladder, I found myself on the horns of a dilemma.

Harrumphing even more, I distracted myself by musing about The Strange Case of the Half-Eaten Banana, a mystery that had been unfolding inside my work bag that week. Every night, I would put a banana into my satchel and lean the bag against the back kitchen door, where I could grab it on my way out the next morning. Strangely, a couple of times that week, when I would get to my office and fish around my bag for the banana, I’d find it already half eaten. Pretty high-larious practical joke, O Uninspired Family, is what I’d been thinking up until the day of Rodent Squizz in the Oven Drawer. 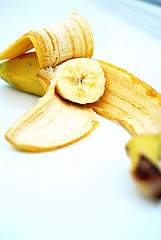 Gnawed-upon bananas and masses of excrement beneath the cookie baker and no place to relieve myself—all these traumas mixed together in my psyche, as I faced the truth of wildlife afoot inside my home.

And it wore a tiny t-shirt reading “I Defecate for Potassium!”

creatures most foul, good thing there was no work in my work bag

20 responses to “…And If the Coen Brothers Won’t Direct It, Don’t You Think Jonathan Demme Could Tap into the Necessary Pathos?”