June 2009: St. Louis, Missouri: A Wedding So Lovely I Sometimes Was Able to Ignore the Humidity

Back in 1993-1994, Groom worked as a student naturalist at an environmental learning center in Northern Minnesota; during that year, he accrued a passle of friends who have hung together over the years.

One of them, John, got married last weekend in St. Louis. Groom’s first memories of John, back at the environmental ed center in the early 1990’s, were of John trying to teach himself how to play the banjo–specifically, that Kermit the Frog song called “The Rainbow Connection.” For weeks, John worked on a few notes…then would stumble…mutter a curse, and start the #^%#@@# song over again. Rather than throttle John for playing the first measure of “The Rainbow Connection” exactly one kabillion times in a row for three weeks straight, the group of student naturalists decided, through gritted teeth, to view these efforts as part of his eccentric charm.

It’s not clear if John ever mastered a fluent run through of that song–perhaps because he also decided that year to learn to dye yarn and weave so’s he could make a Navajo blanket…which then was relegated to the closet when he decided to learn to tan a deer hide using its own brains.

You get the picture. The point, though, is not that John is all about starts; the point is that John has unending enthusiasm and curiosity and passion and energy. In anything that matters, such as friendship and love, he has consistency and follow-through in tumbling heaps.

For me, personally, one of my favorite memories of John has to do with my own wedding, which took place in 1999 at the very environmental learning center where he and my Groom first met. After the ceremony and a little bingo and some ginormous plates of roast pork, Groom and I danced our way through the reception. Towards the end of the night, when I was a fair bit tired of all the socializing, shoeless because my feet hurt so much, Johnny grabbed me off a chair and turned me slowly around the now-empty dance floor. As we spun, he whispered to me about how awe-inspiring love made public was; he eased me out of my own wedding with a feeling of joy.

It was, therefore, a karmic pleasure to share in John’s own joy this past weekend, when he–now in his early 40’s–celebrated his own wedding. I don’t know his new wife, Jan, very well, but I can say she’s worthy of every bit of John’s delights, and, by God, if he ever starts a Navajo blanket in her presence, she’ll make sure he finishes the thing.

Here’s a little pictorial tour of our wedding-related days in St. Louis: 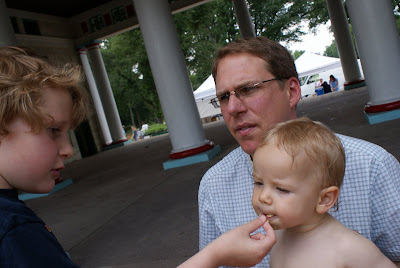 What I really like about this photo is that it illustrates how Groom, some years back, mastered dandling babies on his knee while simultaneously spacing out entirely. 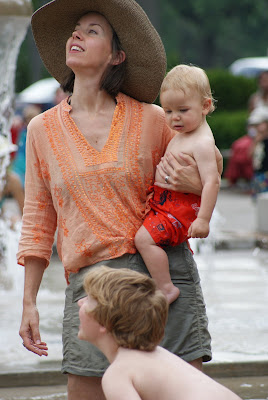 Baby Forest, Mama Ella, and Paco cool off in the wading pool, taking a moment to stare at the sky and wonder if it’s a bird, a plane, or a piece of St. Louis’ gooey butter cake flying overhead. 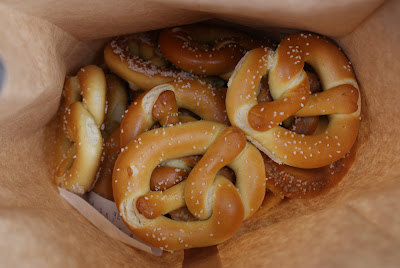 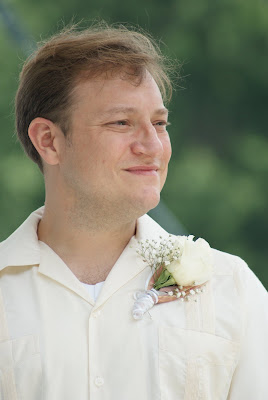 John spies his bride as she walks down the aisle towards him. The look in his eyes of naked adoration and absolute rightness gives me hope for a whole lot of things in the world. 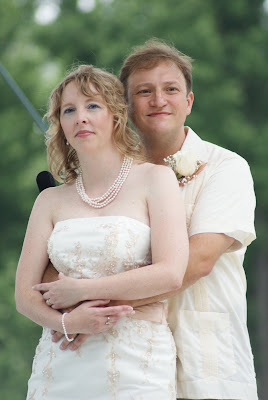 Every ceremony needs a little musical breather in the middle. Them vows can get heavym so it’s good to have some moments when the couple can stand quietly in a clutch. 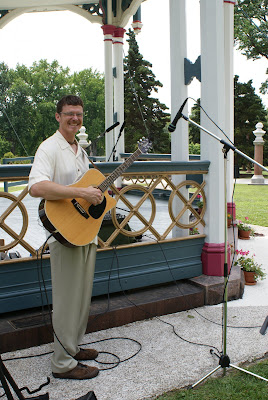 Baby Forest’s daddy (he has a name, and it is Michael) played and sang, just as he has for nearly all of the crew of original student naturalists when they’ve married. 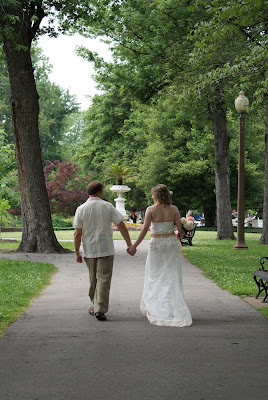 As with the moment when the groom spies the bride, this picture also encapsulates the best of what a marriage can be–that business of having someone to walk down the path with you, slowly, in dreamy step, while all else falls away. 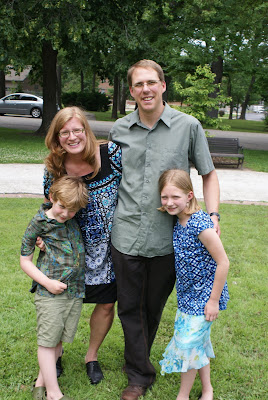 Even when we’ve made an effort (the kids saw an iron the day of the wedding for the first time in their lives and clamored to know what this new technology was called), we’re pretty much a raggle-taggle family. I like to think it keeps us “approachable.” 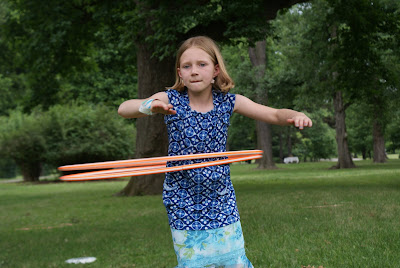 Note to everyone: if you’re having a reception, and there are going to be kids there, get about 15 hula hoops. By the way, isn’t Girl’s new St. Louis haircut all cutie-pie on her? We actually took her to an upscale Aveda salon, as a special treat; so imagine my gasp when I went to pay for the cut and was told “Nine dollars, please. Yup. Our kids’ cuts are nine dollars.” GOODBYE, Great Clips, you big, dumb cheez-whiz of a place that charges $15! I’m totally driving back to St. Louis next time Girl needs a trim!! 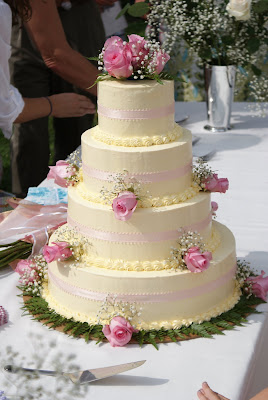 John’s brother made this cake. AND THREE OTHERS. I’m planning on writing in to the Food Network to get him on one of their cake challenge shows. Like he couldn’t make Pluto out of buttercream for the Disney challenge? 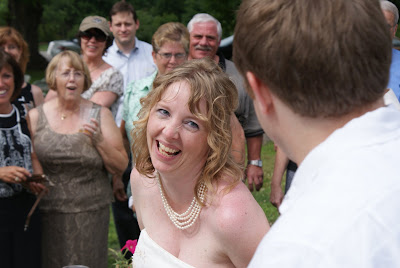 Love this picture. See what I mean that Jan’s a worthy mate? 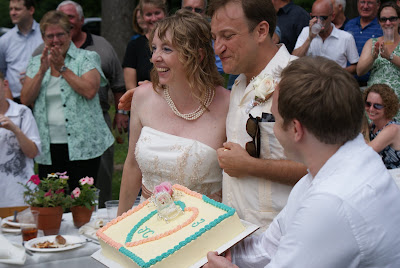 John took a moment to address all those who had gathered at the reception. There were thanks. There was some speechifying about how he and Jan, some months back, had started focusing on the project of planning their wedding, on the day they visited the park and the gazebo and decided to hold it right there. Then John speechified some more about other projects they’d undertaken a few months back.

Just when you’ve thrown a hella good wedding, you realize what will really make the crowd go wild, and it’s called “the reveal of a baby braising inside the bride’s cream-clad oven.” 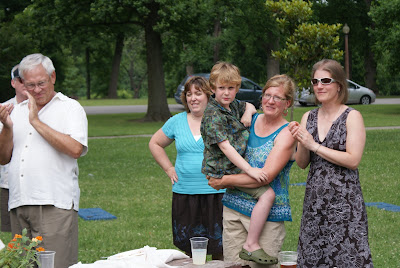 Okay, MOST of the crowd went wild at their announcment. Paco looks skeptical, doesn’t he? I think he’s worried his Pokemon trading card hours might take a hit if he has yet another baby to follow around and feed. 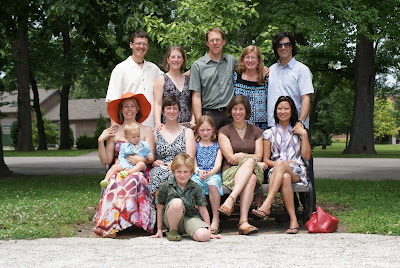 John was too busy hugging a hundred people to make this photo-op. But here’s part of the original crew of student naturalists (and a few hangers-on),

21 responses to “June 2009: St. Louis, Missouri: A Wedding So Lovely I Sometimes Was Able to Ignore the Humidity”