Ode to Sampson: I Type At You, My Vigor Diminished

Do not even ask me to hold a kettle ball for you right now, much less to swing it around and jack up my triceps.

As long as we’re on the point, incidentally, how come you’re always asking me to hold your kettle balls?

At any rate, I couldn’t heft even the lightest of your ubiquitous kettle balls, for I am vewwwwy weak, and all my muscles are shrively.

You see, the source of my strength underwent a heat-induced chopping today, and, no, I am not referring to hot flashes, although I understand that particular pleasure loiters just around a very dark corner and down a long, menacing alley.

Rather, it’s been, like, a kajillion degrees here during the hours of ye olde daytime, and the humidity has been at ninety-seventy-twelve percent. With such conditions in force, what sweaty, limp, and crabby redhead wouldn’t trot in to see a perky stylist named Rosie at the nearest air-conditioned Aveda salon?

…all of which (em, right about here, please do a little smeary motion with your hands in front of your face, and also make a little “woo-dee-woo-hoo” noise down in your larynx, the effect of which is time transport, back to the year 1997 or so) reminds me of a story about my bestie girlpal named Pamm.

See, back in 1997, Pammy had some ovarian cyst problems. And it wasn’t even humid then.

Her ovary was cystic to the point where mean doctors with anger issues planned to attack her with three-foot needles and lance the boil.

In a certain way, and thanks to laproscopy, it was to be a fairly non-invasive surgery.

However, since Pammy’s body manages to turn everything from bee stings to dairy ingestion into cause for high drama, she was justified in worrying about complications.

Once you anticipate complications, even before you get to see Doc Lancelot, you get a leeetle bit, um, nervous. Anxiety-ridden. Barfy in the mouth.

Pal that I am, my solution to Pamm’s emotional angst the day of her surgery was the time-honored technique known as “I am distracting you now, so look at these dancing puppets!”

Specifically, my distraction before the surgery was to tap into another body-based angst, one termed in the medical books Eff-All If I Wasn’t Born With No Metabolism. Indeed, Pammy and I had always been able to bond over the fact that someone in a Honda Accord could drive by, eating a cake donut, and we’d gain four pounds.

So here’s the puppet I trotted out for her during her pre-surgery anxiety: knowing she had to drink a gallon of vile bowel cleanser before the lancing (in case her intestines suffered a nick), I urged her to weigh herself first…drink the stuff…do a lot of reading of The New Yorker whilst on the toilet…and then weigh herself right before the surgery. “Nothing,” I hollered at her, “will ever again give you such rapid and dramatic weight-loss results, even if it’s hawked to you on a late-night infomercial by one of the trainers from THE BIGGEST LOSER, a show that isn’t even on tv yet because it’s only 1997! Empty your bowels, Love, and then take those numbers from the scale into the operating room with you!! Do it!! Glory in the power of those pounds peeling off…er, flushing away!!!”

Damn if she didn’t lose six pounds that afternoon. The poo came out, and Pammy went supermodel, moved to Brazil, and married a soccer player.

Okay, now do the smeary hand thing in front of your face again, and make those woo-dee-doodle sounds in your throat, ’cause we’re flashing forward to the epoch known as Right Now.

HI! How are you? Dizzy? Choose a focal point on the wall, and stare at it to center yourself. It’s 2009 now and, most importantly, Bush is out of the White House. Isn’t it nice here?

Back in 1997, my buddy Pamm lost weight from her innards. Sort of like that–but not–today I lost some weight, too; it didn’t happen because I had a cyst but because my entire self was spontaneously combusting thanks to that tart named Summer. Check out my “hell, but I need to cool down before I strangle the innocents” rapid weight loss technique, which I believe the French call Une Chop de la Tete: 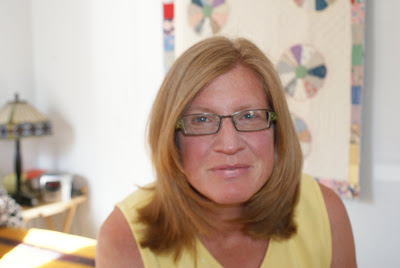 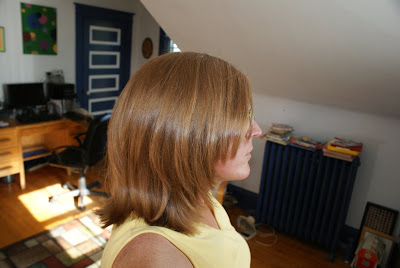 Point of pride: only one of the dropped pounds was from poo (it squozed out of my ear when I laughed too hard at a passing clown).

The other lost pound? Entirely follicular.

at least the mosquitoes are thriving, cut my hair and make me smile, ovarian cysts

22 responses to “Ode to Sampson: I Type At You, My Vigor Diminished”