I’m not much of a joiner, nor do I really like playing tag. Also, rules chafe.

Thus, I’m not a particularly good candidate for the “meme” challenges and thoughtful awards that litter the blogscape. That noted, when kind fellow bloggers throw an award or a challenge my way, I do appreciate the acknowledgment. I do.

In the last month or so, a few blog-patriots have given me the challenge to list ten things about myself that no one knows. So, okay, it’s come up enough that I’ll do it; but I ain’t passing it on or tagging anyone else. Just write your blog posts, honies, and I’ll come read them. If you want to make lists, you should do that. If you don’t wanna, then don’t. ‘K?

Ten Things. Some of them my husband already knows, as he is my central repository for minutiae that require expression. But it’s what I got. 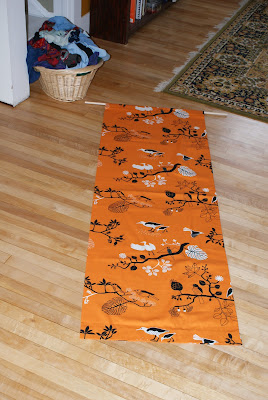 Constantly filling my eyes with birdies and bright orange, though, may just keep me off the glue during the imminent dark months of winter.

2. Streaming my own variety of “radio stations” over Pandora.com is a great way to find new music or just get a better sense what Those Kids Today are listening to. Although I can input any musical artist at all and then listen to “comparables” for hours, I’ve been using it to listen to more of The Killers, The Strokes, The Shins, The Ting Tings, and even one article-less group, Kings of Leon.

When I tire of pretending to care what Those Kids Today are listening to, I create a station for an artist I actually like, such as Lucero or Husker Du, and get all rock outy and nostalgia-afied. The other day, I played the They Might Be Giants station for Paco, and while he pipped around to the selections, it was acutally Groom who had to go over and hug the computer, commenting, “This is my favorite station ever.”

3. I am outrageously shallow and enjoy diverting my brain with the lives of celebrities. That part of my brain also really likes to go out and shop for boots. Generally, as is also the case with boots, my brain tends to love or hate celebrities. Although I will never know them, nor they me, celebrities cause in me an emotional reaction. I adore Russell Brand; I despise all reality show bimbos who, should their airplane go down over the Atlantic, sport implants that would keep them bobbing in the ocean loooong past when life rightly should have been snuffed out.

Interestingly, here’s what I realized last night: I flatline when it comes to Melissa Joan Hart. She engenders in me zero reaction. She is like vanilla pudding served in a clean white porcelain bowl, if you were to leave out both the bowl and the pudding.

4. My left hand smells like laundry detergent right now. Wouldn’t this be one hell of a puzzling mystery, if I hadn’t been doing laundry? How would the detective who finds my corpse explain the fact that one hand–only one hand–smells of Tide? Maybe I was making pipe bombs and–haHA, Karma lashed out!–one accidentally exploded and killed me.

I guess I’d rather just do laundry and get the hand smell that way. All in all, it’s one of the better hand smells. That detective should thank me for not springing a vastly different hand smell on him, in fact.

5. My Girl is growing up, which is part of the reason why I cropped this photo severely. Plus, some of y’all are big preeverts and should take your wanker selves off the Internet and stop looking for pictures of kids, you internally-broken skeezoids.

Anyhow, she’s growing up but is clearly in the ‘tween years, when the idea of middle school still has mystique. Here’s the thing no one knows about me: I just want to keep her in a bubble bath, reading books, through the middle school years. She might emerge pruney and dehydrated, but at least her self-esteem will be fluffy and clean. 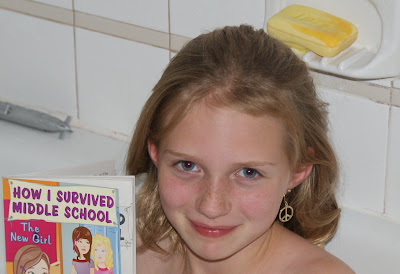 6. Because Girl is growing up, and we’ve had to admit she will one day get moods and boobies and tampons, she’s going to have her own room for the first time. We’re currently working on shoveling out our guest room so that we can paint it TURQUOISE and ORANGE and YELLOW and maybe RED!!!! With polka-dots!!!!!! Groom has spent hours going through the closet, pulling out papers and running clothes and CDs of unknown origin. The other day, we put safety goggles on Paco, gave him a mallet, and let him bash up a stack of CDs. Now our back yard glitters with silvery shards, and Paco is feeling better about his beloved “Dee-Dee” moving down the hall. His one caveat is that, into perpetuity, he gets to smash things we no longer need. Tomorrow, I’m going to lay out my uterus on the unmown grass and tell him to hack away.

7. Speaking of Paco amusing himself in the back yard, we had one dry day recently, during which he built a veritable Hadrian’s Wall of leaves, only declaring it done when it was as tall as he. I regretted his Northern European bloodstock, as the wall took a damn long time. On the positive side, it did keep him from setting fire to stuff for at least an hour. 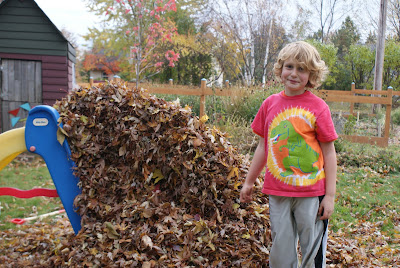 8. The mornings already are so dark, a state made worse by unrelenting lines of rain in the region, that I fear I will have bedsores by March. This morning, as is his habit, Groom slipped out of bed early, and during the brief moment when I roused, I thought, “What the hell is in his body that makes him wake up and get up? I don’t have that thing. If I lived any closer to the Arctic Circle, I’m pretty sure I would spend six months of the year under my duvet.” Half an hour later, again as is his habit, Groom brought an armful of sleepy boy into our room and dumped the softness into the bed with me. As the limp lad and I cuddled in for ten more minutes of warmth in the darkness, I realized that I could spend eight months a year under the duvet with the right company.

10. Completely without plan, I recently managed to get all twenty of my fingernails and toenails on different cutting schedules, something I hadn’t even known was possible until I did it. After a few months of, “Ooh, this one’s a little long; I’ll just do a quick snip” followed three days later by “Time to go after that hangnail, and as long as I’m at it, trim down the whole nail” followed four days later by “Hmm, that one’s snagging a bit,” I ended up with every single nail at a different stage of growth, a state that illustrates better than anything

unless we announce them.

bright banners, Girl grows up, list of ten, the versatility of leaves