Sometimes I start a blog post, and then it sits as an unpublished draft for months, even years (case in point:  the draft post about how I’m not looking forward to the presidential-nominee battle between Hilary Clinton and Barack Obama).  This lag is probably a good thing, as it reminds me of the importance of letting things gel, of acknowledging that writing can serve different purposes in different moments, and that some composing really is a process with stages, starting with getting ideas and moving into shaping them into something more polished and final.  However, in some cases, the draft remains a draft because the simple act of hammering out those ideas satisfied the impulse.

The fairly-unedited freewriting below is just such a draft, a thought vomit that alleviated stress and has sat, untouched, since its inception; after considering if I want to mess around with it any more, I’ve decided I need to toss it out as it is, just to shed the negative ju-ju in it before the new semester begins.

The backstory here is that I was grading Cause/Effect essays last term, and I came upon a run of particularly illogical, poorly-thought-out papers.  Eventually, I snapped, and I took a break from grading to pound out the start of a post–more of a rant–below.

The even backer-story is that I was grading during a week when my sleep was outrageously out of whack.  Paco, who is both charged and plagued by imagination, was unable to sleep for about three nights in a row.  He’d make it for a few hours but be up by 1, 2, 3, in the morning, crying, out of sorts, scared.  Since I can handle consciousness in the dark hours better than Groom, we have a longstanding arrangement that I’ll handle things ’til the sun comes up, and then he takes over.  The upshot was that Paco and I went through all sorts of machinations to get him back to sleep:

1)  Mama will sleep with you (however, that is about the biggest treat he can imagine, and we really get a bang out of each others’ company, so lots of times we have to talk and laugh and hug–which ain’t sleepin’);

2)  Let’s try reading (when you’re actually very tired, though, books are blurry, and even Scaredy Squirrel and Tacky the Penguin flop);

3)  Merde. Let’s watch a show and see if we can fall asleep on the couch in front of the monitor (this is the most successful approach, although neither of us ever falls asleep on the couch; rather, we just watch three episodes of Pokemon, until even the six-year-old capitulates, “We have to turn this off now.  I can’t stand it anymore”).

So, basically, I’d spent a few endless nights wandering around the house with a softie lad, and, as a result, was feeling both surreal and unhinged during the daylight hours.

Enter the stack of Cause/Effect essays.  The math here would read “shoddy papers + wrung out teacher = crabby attempt at a blog post.”

Here’s the thing, though:  after I tapped away at the keyboard that day, venting therapeutically, I went back to grading and encountered some stronger papers.  The next day, I went back to the classroom and laughed and enjoyed the students.  Plus, I slept straight through one night and found my moorings again.

I’ve been joking with increasing frequency that my husband needs to get a career or we need to open a coffee shop or I need to get a paper route.

Right now, this week, I’m in the midst of feeling more serious about it. Because I’m clearly in Bad Teacher mode.


Evidence? I’m put out with my students.

For being so damn dumb. So frickin’ dumb. They’re dumb, and I can’t get over it.

I’m pretty sure that’s not part of the criteria for Teacher of the Year.

I’m also pretty sure I wouldn’t get points for wanting to take at least half my students firmly by the shoulders and shake them ’til their hollow heads waggle about.

Now I know I’m supposed to jolly off their poor work and regroup and come up with strategies to motivate and transform them and help to bridge their gaps.

But mostly, I want to throw them all off a bridge and wave as they fall down the gap. I might yell into the crevasse, as they fall, “You know, I’m not sure the United States has it completely right in telling its citizens that everyone has a right to a college education–because that attitude overlooks the fact that not everyone should go to college. Because some of y’all are just too dumb for it.”

See what I mean?

preferably into a job where I don’t have to interact with people.

‘Specially them dumb ones.

Actually, more than being put out with the lack of innate intelligence, I’m having a wolly here about the lack of care and effort. Why am I spending more time grading a paper than the student did writing it?

That’s the insult I can’t get past today.

For I have to think–I HAVE to think–that if the students had put a little effort into their papers, they wouldn’t have written such dumb stuff. Right?

Similarly, Student Z argues that texting has resulted in a new way of communicating. Caught in her body paragraphs by this circular reasoning, she simply spun and spun, never realizing that texting IS a new form of communication and, therefore, the result of it must be something different than itself.

If Student AA had taken more than ten minutes to crank out her paper, she wouldn’t have written, “Back in my grandparents [sic] day, they never had anything except public schools. Today we have home schooling [sic] and online school.” RIGHT? And if she could have bothered herself to take more than ten minutes to write her paper, I then wouldn’t have felt compelled to spend 13 minutes writing out an explanation to her of how “online schools” are often also “public schools” and how back in her grandparents’ day (which, based on what I know of the family, was in the 1980s), there also were things called “private schools” AND HOW HOMESCHOOLING ISN’T AN INVENTION OF THE NEW MILLENIUM.

You’re getting some small sense of the huff I’m currently having, ja?

And I haven’t even copied for you yet this sentence: “The first Death Person in 1995 sends a text message by David Jackson.” Read it.

Did you get it yet?

Finally, my husband read it and figured it out: “Death Person” means “deaf person.” Apparently the deaf only function in the present tense, however, no matter what year they sent the text.

Can you see how this all might have a cumulative effect on the instructor? When the occasional student writes nonsense, it’s goofy. I can laugh. But when every single paper in a stack of 50 has this kind of confuddlement in it,

I get defeated. New to me is the anger, though. Surprisingly, I’m just pissed off. The sun is shining, and I’m inside reading this stuff? Really?

I’m sighing loudly now, as I take the next paper off the stack. It’s about the positive effects of exercise. Improves health? Check. Improves self-esteem? Check.

Gives a person something to do?

I know, on some level, that last point doesn’t seem so egregious. However, think about it–and the more you think about it, the more you’ll see it’s the dumbest of all. An effect of exercise is that it occupies one’s time?

How about you put anything into that equation; the end analysis is the same: if a person does something, then he/she has something to do. Exercise is one of a million choices.

For example, if that student took a ballpoint and inserted it, with great force, into his eardrum, that would occupy his time (and if he managed to spear his brain in the process, it would constitute the best use of grey matter he’s yet discovered).

I’m handing out ballpoints in class next time. I’m telling each of them to stick the pen up to an ear.

End freewrite.  Huzzah to sleep and, resultingly, a more balanced human being.

What didn’t end with the venting and sleeping was an underlying sense of being put out.  It’s taken me some mulling time, but I’ve figured out that, in the moment, I was angry at the students who didn’t put enough thought or time into their work.  After time has passed, though, I still have to concede that, even in the clear light of day, I have ongoing frustrations.

For sure, I’m frustrated when students don’t put in the time the assignment merits.

On a larger scale, I’m frustrated whenever anyone signs up for something and then doesn’t commit to squeezing out the best possible performance or outcome.

And I’m frustrated at dealing with students who don’t avail themselves of resources.  If a student admits he has never done well at English or that he has never understood punctuation, and then I advise him to go use a tutor at the free on-campus Learning Center or, easier yet, to email his paper to the free online tutor (which will return his paper, marked up with feeback within 24 hours)…but then he doesn’t…I. feel. my. last. nerve. warp. into. a. kink.

To wring out the another truth:  I am frustrated at the pressure to keep students happy, at an academic culture based on a business model, one in which students are “customers” (and, thereby, “always right”).  While I know teaching at the community college means I’m working with a student population that skews towards learning disabilities, mental illness, and hardknock backgrounds, I do also think I have a right to expect them to–again–avail themselves of their resources, such as free counselors, free advisors, free disabilities services.  Certainly, I know it takes an amount of self-awareness and wherewithal to get oneself to the resource.  I remember well enough my own youth of blithely tripping along my own zigzagging pathway, oblivious to outstretched hands attempting to steer me straighter.

But, you know, the inability and unwillingness of a populace to do its best work has an interesting effect (which, perhaps, I could write about it in my next Cause/Effect essay):  it means the standard-bearers have to fight, constantly, to keep the standards from eroding, from wearing downwards to meet the lack of effort.  Put more bluntly:  I’m tired of having to clap for a pile of crap. 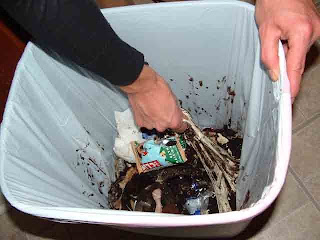 Does this inspire in you a standing ovation?

So that’s where I’m at, here, the day the new semester starts.  I wrote out how I felt.  In doing so, I extricated those feelings enough to take away some of their power–to allow me enough optimism to start the rigamarole all over again.  The gut-level anger has stormed out of the house; but a swirl of frustrations still has a seat on the bay-window cushion, where it glares hostilely out at the driveway.

On the bad days, it’ll see me hopping in my Camaro and peeling out in reverse, leaving skidmarks in the cul-de-sac, heading for the bar.

On the good days, it’ll watch me detailing the dashboard and humming along to Dan Wilson.

Mostly, if things ever get really bad, I hope it’ll confiscate my keys and send me to bed for a three-hour nap.

I need a sugar daddy, I thought about being a lawyer but can’t see how that would have been better, stupid college kids are eating my time and brain