(Apologies to those of you who read this already over at our family’s “Turkey Blog,” which is associated with my husband’s blog of his drawings and comics; occasionally, I’ll be cross-posting between the blogs, but other times, like when I need to swear or refer to genitalia, I’ll be creating separate, new posts here. This is the case of a cross-post! The “Turkey Blog” is at www.layingfallow.com/turkeyblog/) 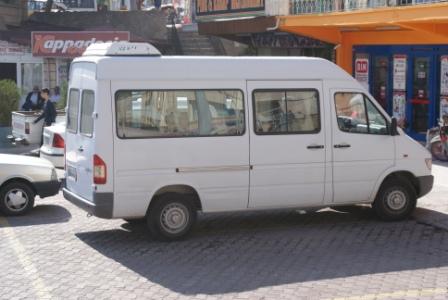 At first, we were oblivous, plopping ourselves down in any available seat, attempting not to sweat on our seatmates.

Little did we know, sweat is not the issue. Sweat can be–is–shared freely. Body odor also comes free of charge.

The issue is gender. Age runs a close second.

Our clodhopper tourist days of the easy plop down are over. Now we know.

All power, all respect, all seating hierarchies stem from The Headscarves. Who knew a rectangle of fabric could hold such power?

However, our family was oblivious to the hidden dynamics that govern seating on the bus. Over time, though, we’ve clued in; we watched passengers and the driver rearrange bodies until the cryptic code of seats cracked open for us.

Here’s how it goes:

Grandma In a Headscarf will always get a seat, even if it means the driver turns over his spot and just holds the steering wheel as he runs along side the vehicle.

Middle-aged and young women in headscarves, too, are assured of seats; bonus inches are afforded to those who enter the dolmus dragging a twenty-pound bucket of just-picked tomatoes.

Once The Headscarves all have seats, the hierarchy loosens a bit. Generally, all women get seats before men do. In the case of a hunched-over grandpa type, though, a non-Turkish, non-Muslim woman might be expected to stand (such as it is inside a mini-van). However, when a non-Turkish, non-Muslim woman enters a full bus, the younger men will hop up to offer their seats.

In other words, first to stand are Turkish men under 50. Next to stand are non-Turkish men who are aware that they should be offering up their seats; the truth is, tourist men usually have no sense that they should be copping to a traditional view of who sits, and so they continue to slump in their seats, backpacks on laps, managing to look pasty and sunburned simultaneously. Tourists get away with such obliviousness. Turks do not. If a Turk fails to follow the code, the dolmus driver or some other older male with a firm manner will reorganize things. Woe to the dreamy twelve-year-old boy who fails to register the entrance of A Headscarf, who fails to leap from his seat and compress his body into a 6-square-inch cower. Woe, too, to that same lad if he fails to hop off the bus and help The Headscarf with her twenty pounds of tomatoes or her burlap sack of peppers stowed in the luggage compartment below. Twelve-year-old boys pretty much have to dance attendance throughout their ride, often switching seats at every stop, from having a personal seat to–at the next stop–sharing a seat with an older man to–at the next stop–sitting on the plastic pink stool that is moved around the bus and lodged into any open space to–at the next stop–sitting up front with the driver to–at the next stop–standing in a hunch on a patch of floor between six older men.

Pre-adolescent children may sit with The Headscarves, usually on their laps once the bus fills up. Girls age 9 and under wear pink shirts that announce “Barbie Princess Carefully Sweetheart” and have their pert ponytails cemented to their skulls with no fewer than 6 hair decorations.

The last rule is inviolate, which means Byron and I choose to violate it all the time: men and women never sit together. Never. If they do, I’m pretty sure someone gets indignant or pregnant or something.

To sum up, then: women sit with women, preferably Headscarves with Headscarves and “moderns” with “moderns” and all women towards the front of the bus; men sit with men, with older men sitting up front by Their Buddy the Driver and younger men in the back where they can compare the nicotine stains on their fingers; the elderly always get to rest their aching backs; tourists crash in and throw off the whole mix; children get tossed on top of a mosh pit of mothers; and adolescents’ feelings that no one understands them and the world is against them are confirmed. 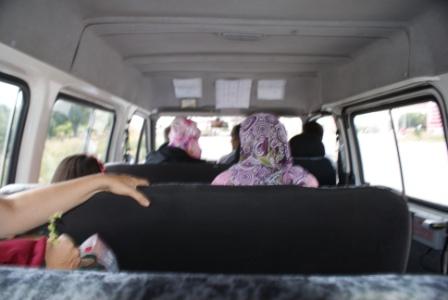 This photo is a bit blurry as I shot it surreptitiously, lest one of The Headscarves of Power turn around and chide me for treating her life as a Cultural Artifact.

a whole new back of the bus, just save yourself