One in Five: Saturday, February 3 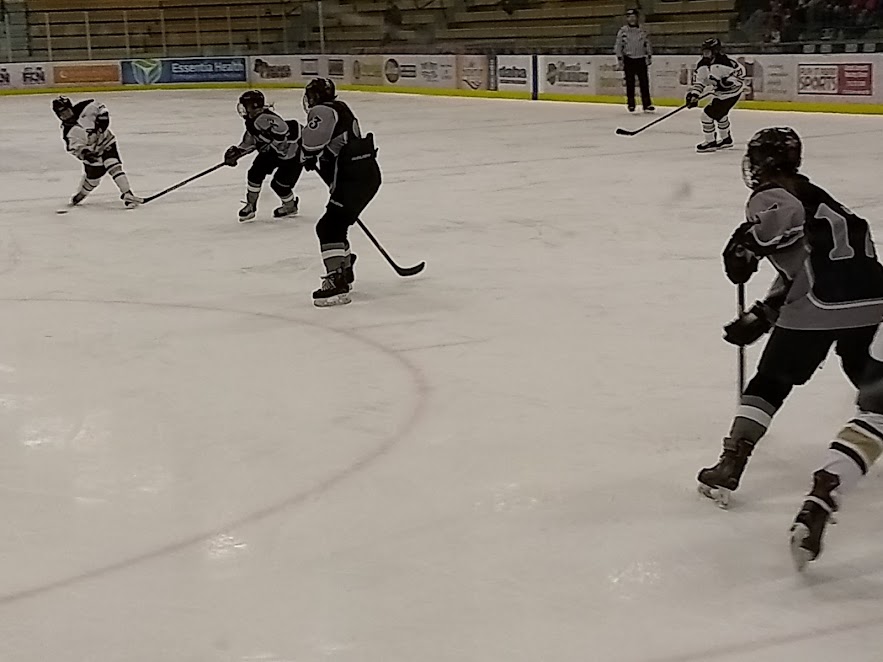 I can’t spot him. Where is he? Byron already pointed him out, his curly blonde hair below the Exit sign, and we’re not that far away, so why can’t I find my kid?

Ah, there! Paco’s head pops up. I can just make out his profile, his head small from this distance, his body invisible as it blends into the other band members surrounding him on the bleachers. Why was he bending down, head out of sight, when the rest of the pep band is ten measures into “The Lion Sleeps Tonight”?

A few songs later, when I’ve moved closer to the band to record them, his head is gone again. JEEZUS. Where’d the kid go?

Pop. His head is back. Once again, he’d been leaning down, scrambling on the floor — gathering up his stack of music, it seems from the way he’s frantically stuffing pieces of paper into his lyre.

Pep band is new to the fifteen-year-old; playing at this girls’ hockey game is only the second time he’s tooted his baritone saxophone in such a fun, casual setting. Until now, all his musical performances have been formal, tightly orchestrated, formal affairs.

But pep band is a wild ride around the moon compared to a holiday concert. A zamboni smoothing the ice behind him, wearing a black knit cap, the music director is relaxed, and the mass of kids in their quarter-zip fleeces are having a blast. No wonder Paco has announced the only good part of band is pep band. In a regular concert, the music is staid, the lights hot, the audience hushed in the dark. But with pep band, the music is contemporary, goofy, punctuating the highs and lows of the game, creating an energy that lifts the arena.

Even though I’m hard pressed to spot his constantly ducking head, we should be glad the kid is playing at all, considering we got halfway to the arena when he realized he’d left his reeds at home. Five minutes later, we dropped a sheepish Paco off at the arena to make his call time, after which Byron and I drove back up the highway, across town, to get his reeds. It was no big deal.

It was also something that would never have happened with his sister (she who has already saved on her laptop a color-coded itinerary for upcoming travels).

Anyhow, he has his reeds, and his head disappears and resurfaces as he collects the music he keeps dropping.

But no. That would be a wrong reading of this evening when our endearing freshman has forgotten his reeds, repeatedly drops his music, and enters several songs late. He might be blundering a little, but don’t we all, we people who move through long hours with eighteen things to handle? His day started at 6:12 a.m. so that he could be at school for Knowledge Bowl practice by 7 a.m. Then, after a full day of classes, he had Robotics practice for two hours, leaving early to get home, change clothes, and grab his dinner, which was eaten in the car as we drove to the hockey game. It was to his credit that he remembered, mid-bite, that his reeds were in his regular band folder and not in his instrument case — since he has one instrument for home and another for school. When he gets home at 9:30 p.m. after pep band, he’s more than entitled to crave soft jammies and a nice lie down on his feather bed.

No, this kid is not missing his moment, not by any stretch.

Rather, he’s zigzagging his way into realizing what his moments will be. That’s what it is to be a young person. When he quits band next year, he hopes to take art classes. He’s good at art. And he’s good at music, writing, cooking, caretaking, empathy, math, science, and observation. The swirl of his days right now — all those moments of coming in ten measures late — is part of the sorting process. I am grateful he’s got so very much to shake out before any of it has to land.

So, okay, he forgot his reeds. His pep band music keeps exploding down to the cement floor, lodging under fifty neighboring feet. He’s allowed a few tatterdemalion glitches.

For there’s so, so, so much that’s firing true and hard in our beloved boy.

The night before he missed the best notes in “Seven Nation Army,” this same kid wandered into the tv room around midnight, diving his hand into a bowl of popcorn regularly while telling me how tired he was and handing me the five-page outline he had just completed for his research paper about binary code.

Crunching as he spoke, he told me, a glint of excitement in his eye, that he learned from his initial research the way we talk about digital memory and storage is actually a recasting of binary code — because a series of eight 1’s and 0’s = a byte.

Later, the kid who would forget his reeds at home explained that hex code is used for colors, like #ff0000 for red — and that letters are used more in languages like ASCII.

When he speaks technical talk at me, I listen hard. I hear what he’s saying. I kind of understand it — although, for me, magic beyond written words is wrought real in musical notation. But my way isn’t the only way.

For him, though, the abstract lives when it’s cast in 1’s and 0’s, “ons” and “offs,” hex code, languages created not from black dots placed on horizontal lines but, rather, that require a different type of cognitive load, one weighted with programmed functions.

The years are flying. I want to cement the midnight scene into memory.

Stretching his neck, he stands in front of me, popping corn into his mouth and explaining basics of binary as I leaf through his outline. His pajamas, his skin, his voice — all are impossibly soft. But his explanations remind me: this kid is sharp. His intelligent late-night tutorial has me nodding. Oh, yes. Languages are infinite in possibility, with the ability to unite or divide. So, if we care, as I do when it comes to tracking his outline and research project, we bother ourselves to learn some cognates, pay attention to the foreign grammars. My boy speaks computer. He and I both share music. And we’ll always meet in the kitchen over an oil-spotted recipe.

As I look up at him to ask for clarification, the well-used rocking chair I’m sitting in creaks loudly. We bought it when I was first pregnant so that I’d have a comfortable place to nurse our babies. And now one of those babies towers above me, explaining transistors.

Possibilities, for this curly-haired cruncher, are limitless. Sure, sometimes he may be feeling around blindly on the floor while everyone else is already playing, but this young man is not missing out. He’s getting there. In his own way. In his own time. He’s on his way.