He’s always crabby when he’s nervous. Often, he swings through a few pit stops  — quick pullovers at “I’m so tired” and “I’m really hungry” — before parking at the real destination: the thirteen-year-old is cranky because his insides are a kaleidoscope of butterflies.

His comfort zone is small, about the size of our house, more specifically the couch or his bed, even more precisely the size of the book in front of his face. Although we, as parents, don’t feel compelled to reshape his natural tendencies away from dreamy introversion, we do realize that our kid, upon occasion, should stand up. Look people in the face. Take a few steps. Become acquainted with Vitamin D. Speak to human beings who don’t share his DNA.

Thus, while we don’t have many rules (don’t need ’em, having drawn two long straws in the Progeny Games), we do force Paco off the couch every now and then. Sometimes I entice him to do a little baking. Other times, he’ll grab a sword and head to the swing in the yard, where he’ll drag his feet through the mud as battles clang inside his head. We’ve trained him into “iPod walks,” wherein we meander around a trail or stretch of sidewalk for 45 minutes, unspeaking, listening to our preferred podcasts. After a sustained “you need an activity or two” campaign last year, we got him to start attending some after-school clubs — chess, Harry Potter, D & D.

Still. Summer loomed, and the empty hours yawned threateningly. If he could find books he liked, then he’d read all day, every day, with occasional breaks for walks. But if he couldn’t find books that interested him, every hour would be sixty minutes of slow-grinding hell. Even more, we know he needs to experience a variety of inputs — as a matter of preparing him to one day exist independently in the world.

So we signed him up for a local program called The Incredible Exchange. His sister participated in this program for two summers when she was younger, and it was good for her. Open to kids who fall between the “camp and daycare years” and the “driving and working years,” The Incredible Exchange asks participants to volunteer at a partner institution for 50 hours over the course of the summer, at the end of which they can choose a reward for their efforts. Some kids choose horseback riding lessons; some choose art or music lessons; most go for the free ski pass to the local slopes.

When we told Paco he would be volunteering this summer, the crabbiness flared. Immediately, he announced he wasn’t interested in horseback, art, music, or ski rewards. The kid LOVES art. He was being ornery. However, his question of “Can I just volunteer and not have to take one of the rewards?” hit an admirable note. Yes, Pup. You can just do the volunteering and not expect anything in return. It makes me like you better, in fact.

So there I was, in the car, watching him toss his pack onto his back, watching his scowling face approach the car. He was nervous. It had arrived: the day when he would spend a few hours at one of the high schools, choosing his most-favored potential sites for volunteering, sitting down at tables with representatives from those sites, enduring interviews with them.

To his credit, with evidence of emerging maturity, once he slid into the passenger seat, he deflected his crabbiness with a pained smile of acknowledgement. “I really don’t want to do this tonight,” he stated, the verbal equivalent of a much-put-upon sigh.

“I know, Bubs. But you’ll get through it, and then it will be over.”

It is a distinct relief to have moved past the years of cajoling and deal-making, a welcome move into the era of “Some stuff sucks. It’s still going to happen” pragmatism.

“Yea, but I really don’t want to,” he confirmed.

Fueled by the tick of minutes, his anxiety gained momentum. By the time he reached the high school an hour later, he obsessively fidgeted with his hair, smoothing wayward curls and cowlicks, fluffing, flattening, poking, channeling his nerves into grooming.

In the big cafeteria, following the proscribed procedure, he approached the tables of his top three potential sites — the railroad for tourists, the county fair, the Boys and Girls Club — and sat down at each one. He talked to the strangers sitting at the tables. He answered their questions. He had prepared a question for each of them (“What traits would you like to see in a volunteer?”).

By the time he’d finished three interviews, he was on an endorphin high. Checking in with Byron, who sat off to the side working on a crossword puzzle, Paco announced, “I’m going to one more table, just in case. I mean, in case none of the ones I’ve talked to decides that they want me.” With that, he strode determinedly to the table of the daycare housed in the senior citizen home three blocks from our house. We had been lobbying for this site both because he would be able to walk to it and because he has long exhibited an affinity for the little buddies of the world. Earlier, when he’d been nervous and crabby, he’d refused the idea. No, not the daycare. Two hours later, once the nerves melted, and confidence replaced fear, his mindset shifted. Maybe it would be fun to work with little kids. He’d seen them being taken out for walks sometimes, and he couldn’t think of anything more awesome than being able to hold the leash-tail of a preschooler wearing a monkey backpack.

After talking to the volunteer coordinator from the daycare, Paco knew: this site would be his first choice. Before leaving the high school, he easily ranked the potential sites on the card he would turn in; he could only hope the daycare also put him high on their list of hopefuls.

They did. A match was made.

So now it’s summer, and the hours can be long, and mostly he just wants to read, yet: our long-legged, big-footed thirteen-year-old walks three days a week to the daycare. He did their training, watched their videos, filled out the forms. His task now is to face the saucer eyes of a crowd of toddlers; they cluster around the door whenever someone new, a teenage volunteer perhaps, comes into the room. From the minute he arrives, “my hands are full — because the little guys grab them.” When he sits, his lap serves as couch to every little pudgy diaper-wearer. “The only time I don’t have a toddler on me is when the groundskeeper comes by on his tractor mower. When that happens, all the faces are pressed against the window, and everyone’s yelling and waving. He never sees them, but they never stop trying. Tractor guy is apparently named Cam, but some of the kids don’t get that, so they pound on the glass and yell ‘Ham, Ham, Ham!’”

Naturally, on occasion, they throw fits. Sometimes they tell Paco long stories in which only two words are intelligible. Sometimes they need his help. Sometimes they bang at his head — gently, he assures me — with a plastic hammer. Sometimes they are crabby, and it is his task to weather their moods. For the Fourth of July, the entire daycare lined up and marched around the old folks’ home, parading flags, spreading toddler energy to the retirees. The report has it that the senior citizens loved that parade. Except one guy in the Memory Care unit who got really, really mad.

But parades are for special days. Mostly, Paco’s hours are spent on the floor, seeing the world from their perspective. He is learning to accept their unconscious violations of his boundaries as they plop in his lap, tug at his shorts, lean on his back. He sees ways he can be of help. He reads books and books and books because the toddlers love to hear about Elmo and the letter Q. Subconsciously, he is absorbing a lesson: he has power and strength in that room, and he is comprehending that, when thoughtfully applied, his power and strength can make days better for “The Littles.” He watches the tiniest girl, a wee sprite who moved from the Infant room to the Toddler room on his first day of volunteering, and he adores her. “She’s the cutest thing, Mom. She doesn’t talk very much, maybe because she’s new, or maybe because she’s so small, but I really like that about her. She’s always quiet. So we sit in silence together. I love that.”

In his hours of volunteerism at the daycare, our sometimes-sullen hair fidgeter is experiencing a monumental shift: from taken-care-of to caretaker.

During the second week of his stint, he came home and announced, “Well, I guess I’m really good at putting people to sleep. That’s what the teachers tell me.” I pressed him for details.

It was nap time. The cots were out. Some kids lay down docilely, but others, their energy hard to harness, ramped up. It was a time of transition, of muting bright energy into shadows.

Along with the teachers, Paco worked the room.

He helped tiny people take off their shoes and socks.

He covered them with blankies.

He lay next to a two-year-old boy and read him a book.

He moved towards the boy who can never settle down, whose energy always zings off the walls.

Gently, Paco enveloped that energy with his own, bringing calm to storm. He reached out a hand, started rubbing clockwise circles on the toddler’s back. Slowly, deliberately, he traced O-O-O-O around the shoulder blades, the spine, the neck.

The boy relaxed his grip on havoc, gave over to Paco’s ministrations.

Reluctantly, he released into sleep.

Once the small, sweaty form went limp, Paco kept his hand on the boy’s back for another minute, a benediction of zzzzzzzzzzs.

Then, his legs half-asleep, our tall, beautiful, tender boy unfolded, moved away from the short, beautiful, sleeping boy, stood, looked at the clock. His shift was over. It was time to go.

Whispering goodbye to the teachers, he crept out of the room.

There he stood on the side of that road waiting for the light to change — our boy who is just learning how to control his moods, to tend to the needs of others, to dig inside himself and pull out his gifts.

Alone, he took that step.

At home, my eyes on the clock, I muttered an agnostic’s prayer that all those agitated drivers would see him, watch for him, protect him, treat him like their own, guard his form with their love.

He needed the care of strangers if he was going to make it.

Firmly between the white lines, he hustled across the momentary pause of a red light, heading towards safety, trying to beat the green.

His foot hit the curb just in time, and he smiled.

That road was hard and scary and loud, but he could handle it so long as he remembered

not too far away

was a different kind of place

of hush and shadow:

the toddler room at nap time. 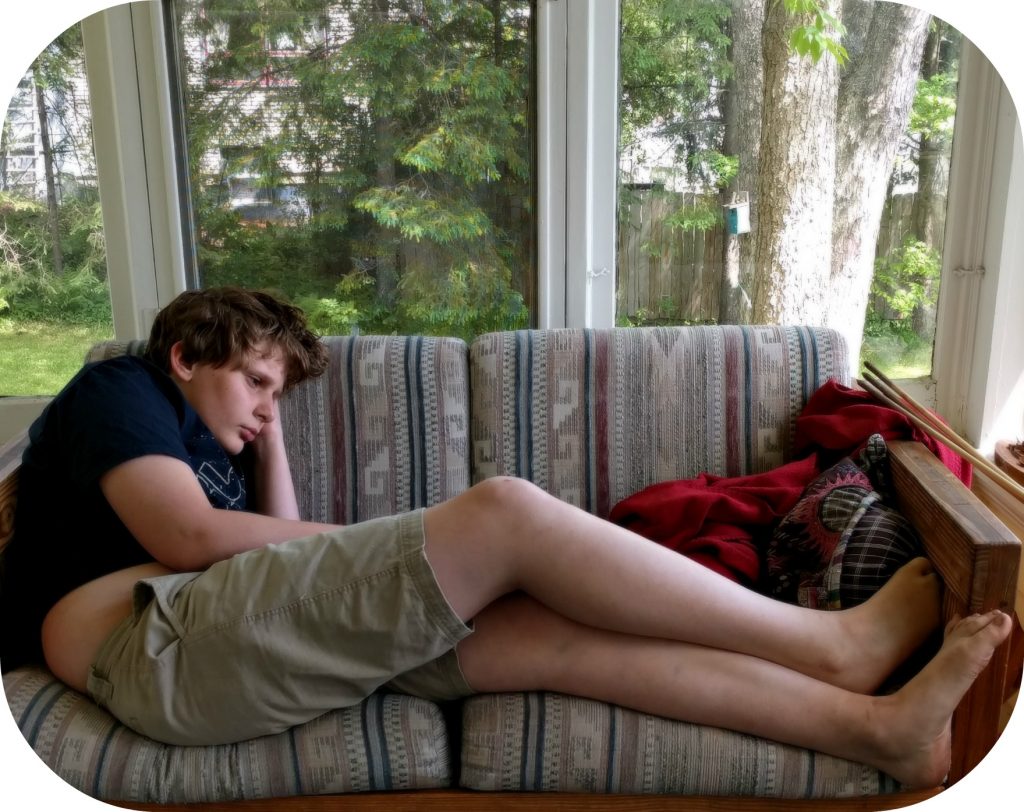