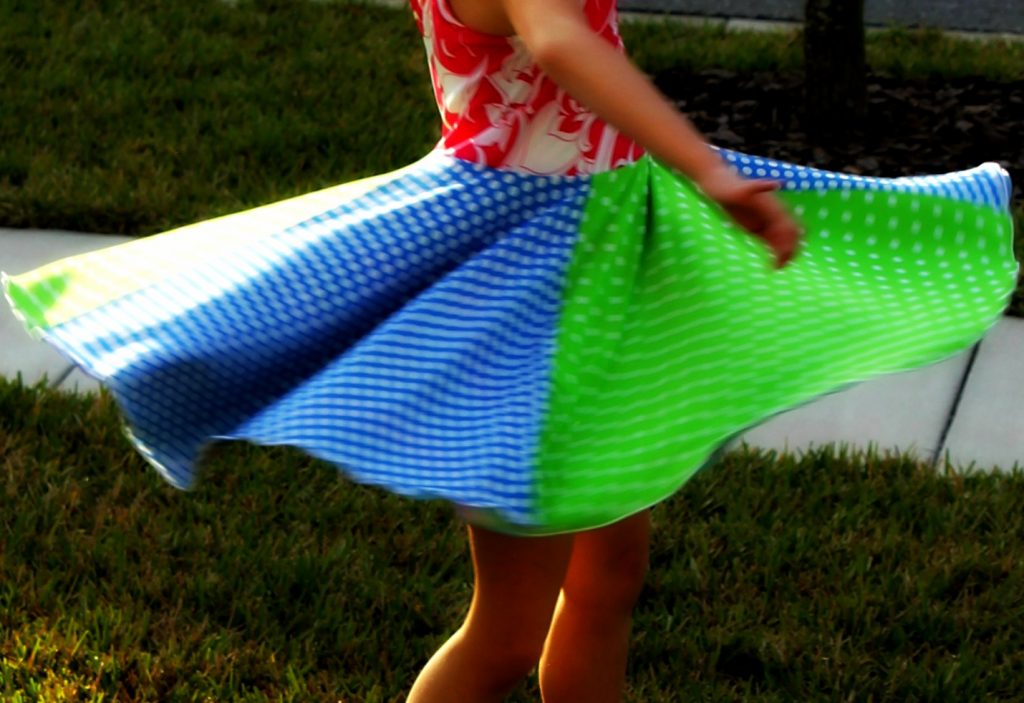 He doesn’t care that I’m running past him, earbuds in. From his three-foot height, perspective is a tricky thing.

Intending to slide by, I smile at the little boy.

As soon as his eyes meet mine, though, words fly through the gap in his top front teeth. A big boy at age six, he shouts: “I brwaught my sister to the creek to show her the creek, and we rode our bikes!”

Slowing to a molasses trot, I smile again — my heart genuinely feels the smile at the same time my public face, knowing it must be kind to children, makes the right move. “Hey, cool,” I reply, grinning towards his younger sister, all of four, who, gasping with excitement at the sight of her brother talking to a tall person, hikes her charming flowered sundress and holds up a single muddy hand, showing the tall person that she’s been busy.

“I this dirt water brudder.” Her lips move, the voice reaching me faintly over the podcast that pours into my ears.

Still, a four-year-old is waving her hand at me, so I wave back, slowing my movement to two inches per second. Part of my brain thinks, “Should I worry that a six and a four-year-old are by themselves at a creek?” while the other part reassures “Those noggins are still strapped into bike helmets that some bigger person helped clasp.”

As if he reads my fleeting consternation, the big brother in charge continues his information dump. Pointing, straight-armed, up the gravel road, he yells, “We live on Idlewild, and we came over there from Idlewild on our bikes, and there are two ways you can get to our house from here.”

My bladder is full; I consider asking him for specifics about main-floor plumbing.

“Two ways, huh?” I ask, still shuffling my feet, trying to convey that the runner lady has places to go. Yet, gad, an enthusiastic gap-toother is about to provide me with a map to the place where his Legos live. I surely do love Legos.

And I surely do love teaching kids lessons about not talking to strangers, which is exactly what they’ll learn when all their Legos disappear.

I pull an earbud out. All the better to hear him with.

“YETH, THERE ARE TWO WAYS TO GET TO OUR HOUSE ON IDLEWILD FROM HERE,” the creek host hollers. “YOU CAN GO UP THAT ROAD, OR YOU CAN…”

His arm remains outstretched, but he stops. This is hard. Two ways is hard.

“Okay, first you can either go up that road. Or you can –…” An invisible hand reaches up and scratches his head.

I am compelled to help Short Stuff out. “Can you maybe also get to Idlewild if you go on that road, right there?” I ask, pointing at the nearest street.

Attempting to win through volume, the brother corrects me. “NO. NOT THAT WAY. BUT THERE ARE TWO WAYS. ONE IS THAT ROAD. AND THE OTHER IS–…”

He stands, frozen. Yet the energy of adventure fuels him. “THERE ARE ACTUALLY THREE WAYS. IS WHAT I MEANT TO SAY. THERE ARE THREE WAYS. FIRST, YOU CAN GO ON THAT ROAD. AND THEN YOU CAN–… BUT THEN THERE’S A THIRD WAY, TOO, IF YOU GO OVER…”

In this election season, I am familiar with his impulse to cover confusion and ignorance with a flood of words. His parents, no doubt sipping vodka gimlets in deck chairs somewhere on Idlewild while their kids riddle their way home, must be CNN junkies.

The kid is flummoxed, but he persists, saying words about the third way. Street. Bikes. Go. Up. No. Down.

Behind him, his little sister twirls, admiring the flare of her skirt.

I love these kids. But a thin trickle of urine threatens my spandex. Inhaling deeply, I reach for closure. “So there are three ways home? You seem really sure of the first one, so when you head home, that would be the best one to take, right? When you have a couple of choices, but you’re unsure, it’s best to–”

The four-year-old interrupts me with a bellow learned from a gap-toothed master. “HE SAID THERE ARE THREE WAYS. THREE IS NOT A ‘COUPLE.’ TWO IS A ‘COUPLE.’”

These kids are going to be just fine.

Shrugging with defeat, I wave goodbye and turn towards home.

There are probably fifteen ways I could get there.

2 responses to “The Creek Elves”