We had a concept. We had an invitation. We had a guest list. We had promotion. Eventually, the big day arrived.

It was time to potluck. Competitively.

As always, the set-up took a fair bit of time. Fortunately, after the Children’s Stories Potluck of 2014, we’d set our neighbors’ long tables (borrowed for the event) on our front porch…and left them there for 54 weeks.

Thus, it was easy as hell to set up the long tables ‘cause there they were.

In addition to chairs and tables, another component of the preparation is creating ballots and a registration sheet for tallying the votes.

Plus, we’re usually scrambling to get our entries made. I tell you: hosting is sweat-inducing work.

Fortunately, my mood this year stayed light, largely due to two visitors: Celebrity Guests Kirsten and Virginia, who had driven five hours north to attend the event. We also felt fortunate and blessed that my uncle, Scott, freshly out of the hospital after having had two strokes in the preceding days, was able to attend. The day after the party, he suffered another stroke and was re-hospitalized but appears, as of this writing, to be doing well.

My point is this: you don’t keep a life-long Minnesotan away from a potluck.

At the appointed hour, guests and dishes began to arrive. I’ll let pictures tell the story. 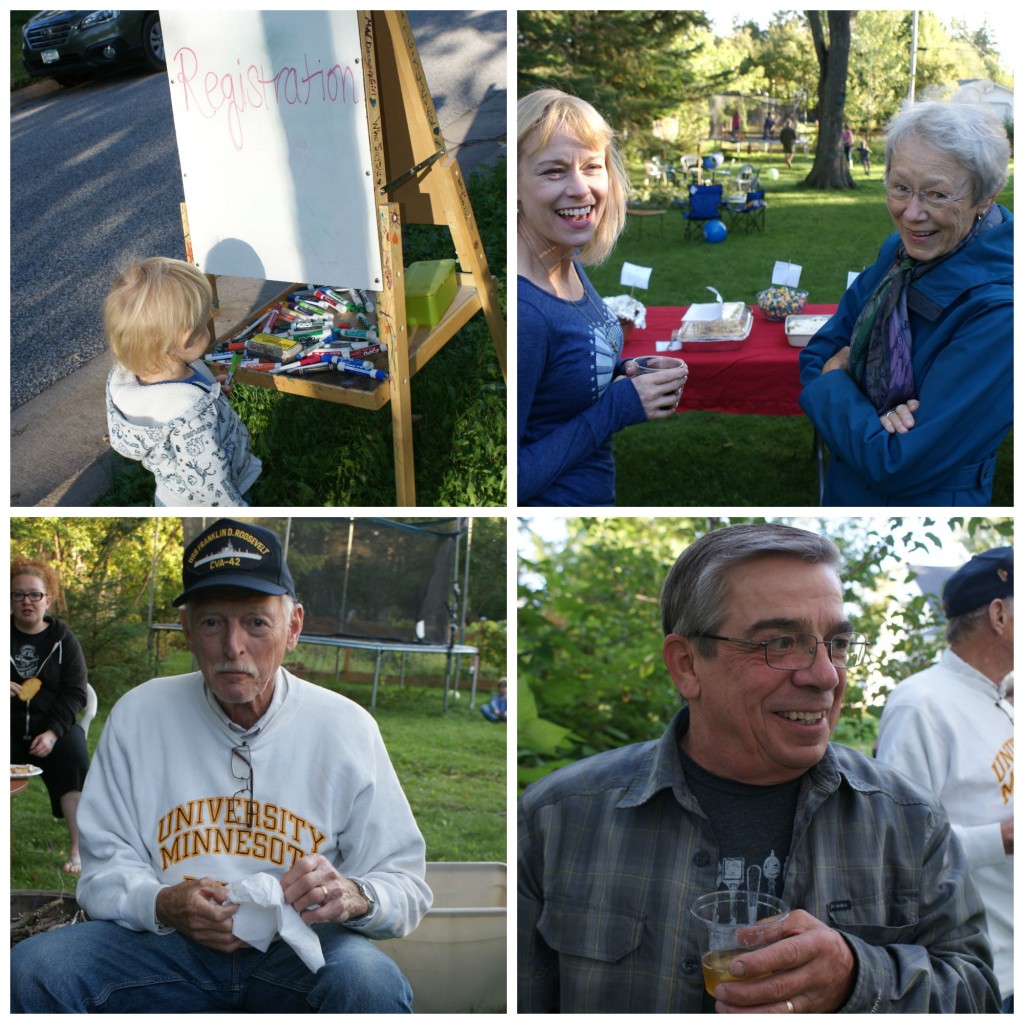 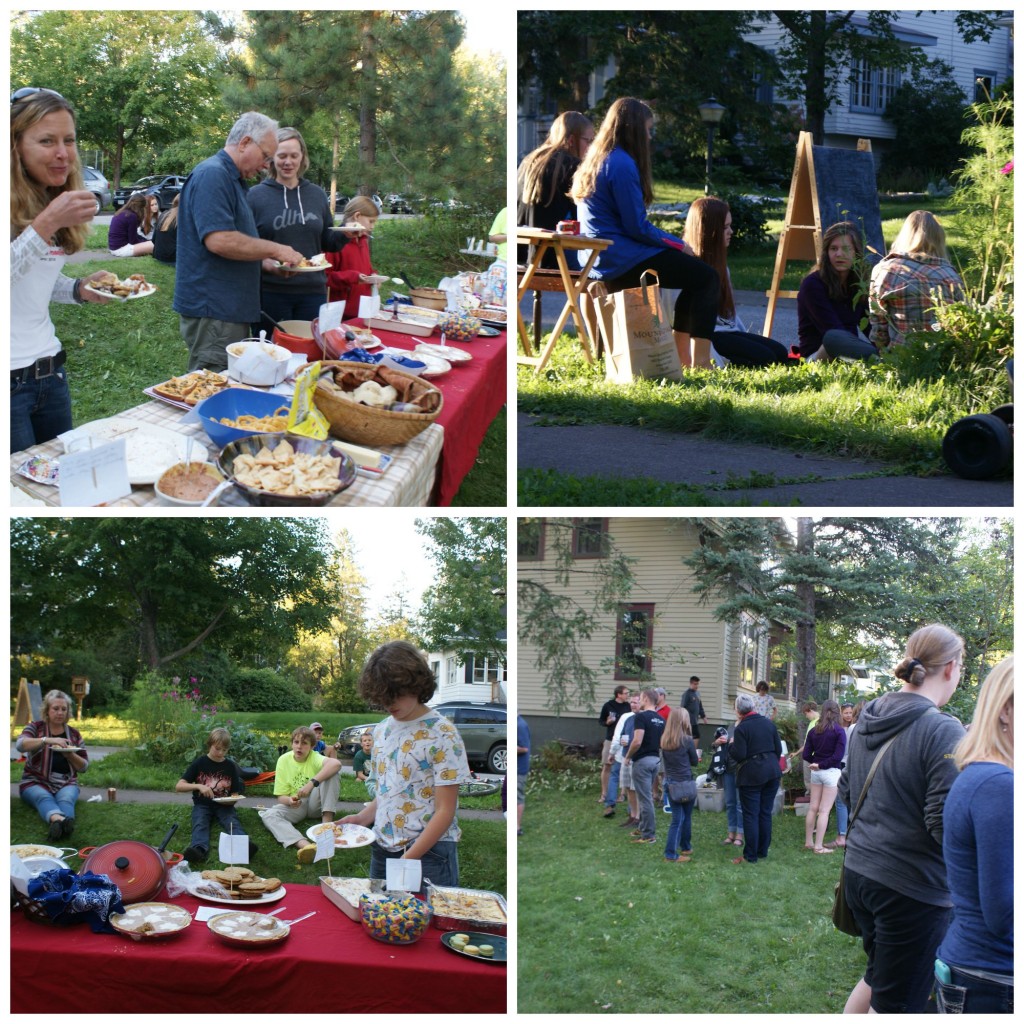 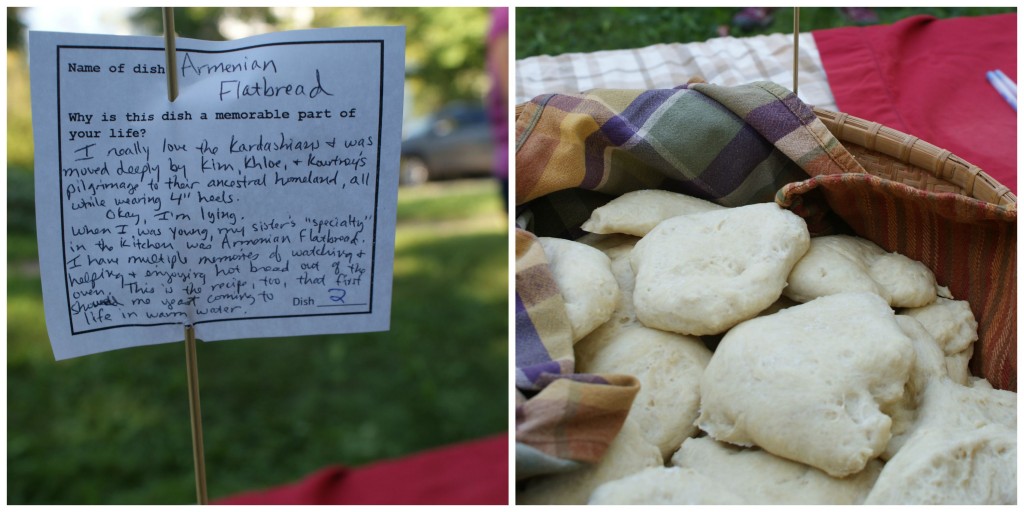 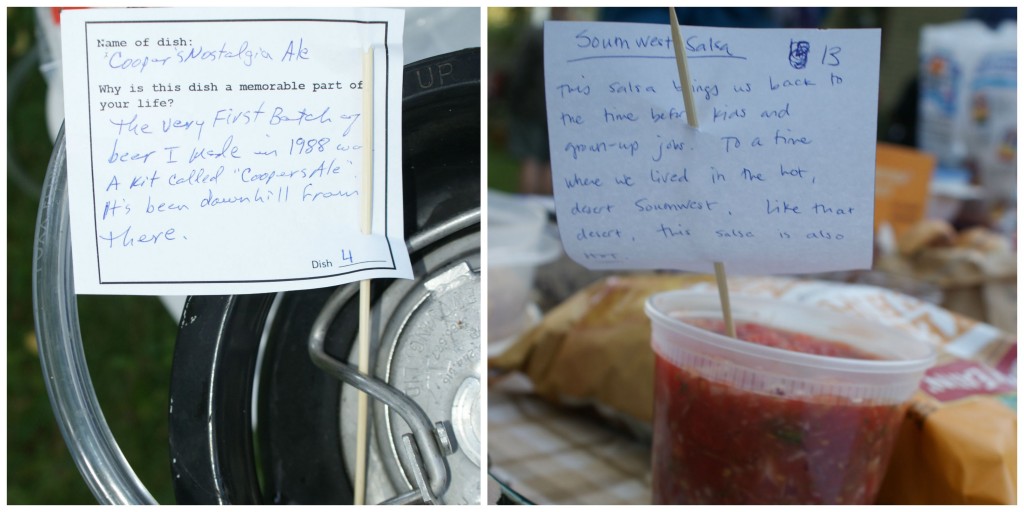 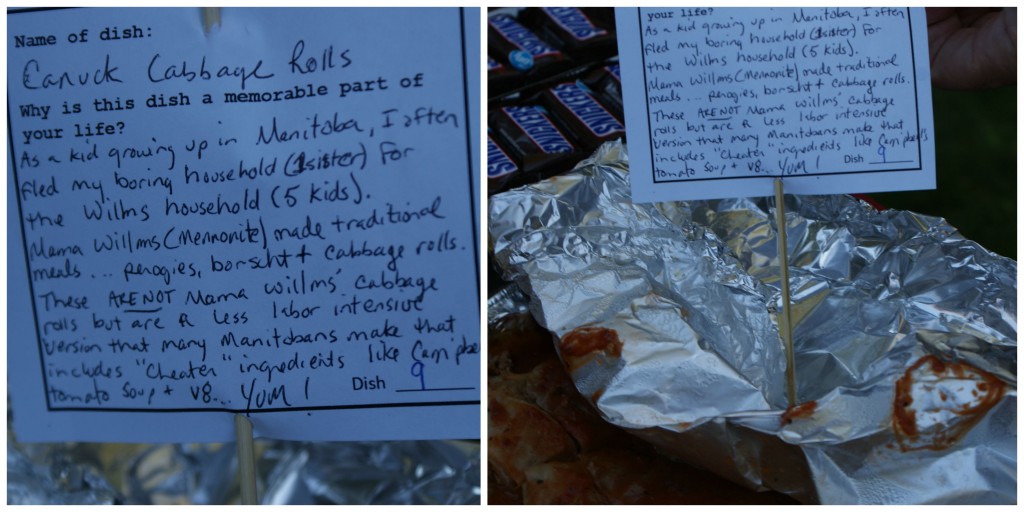 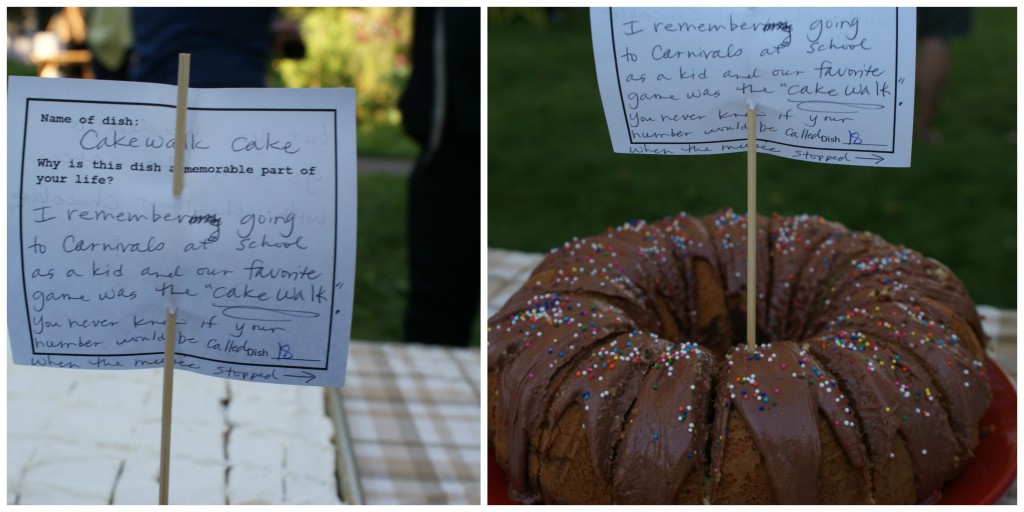 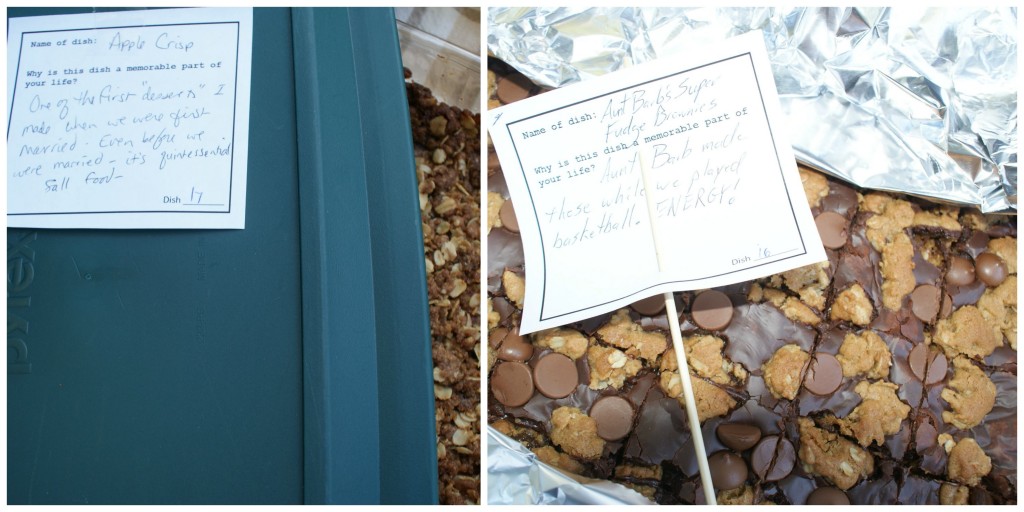 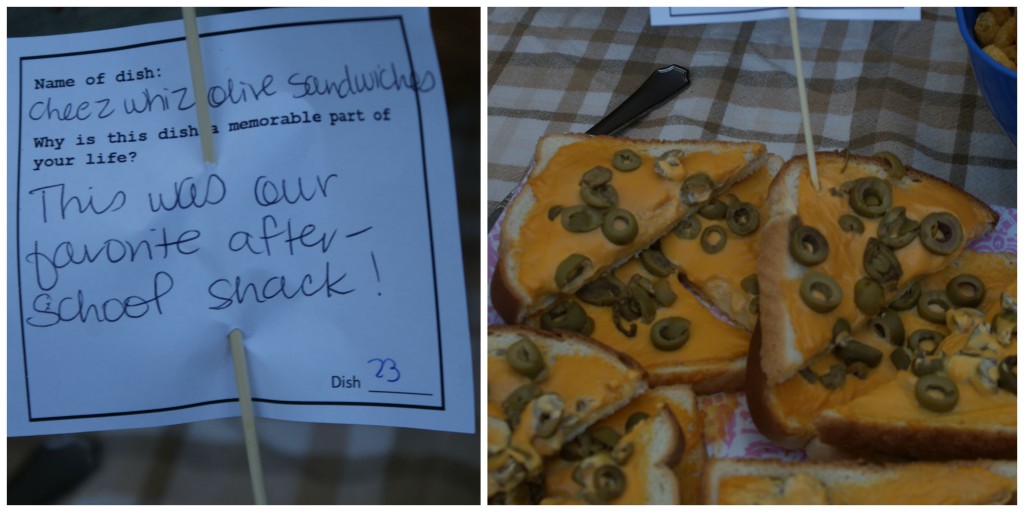 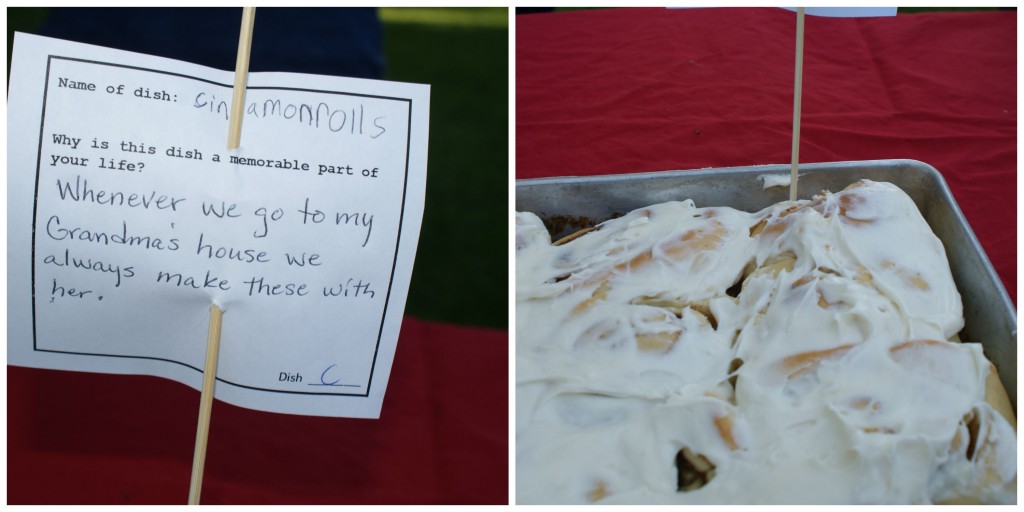 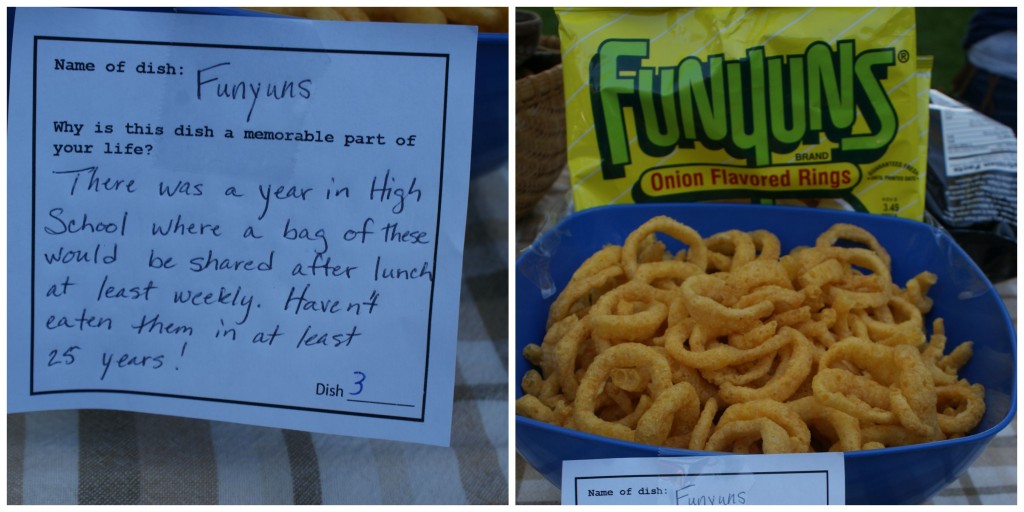 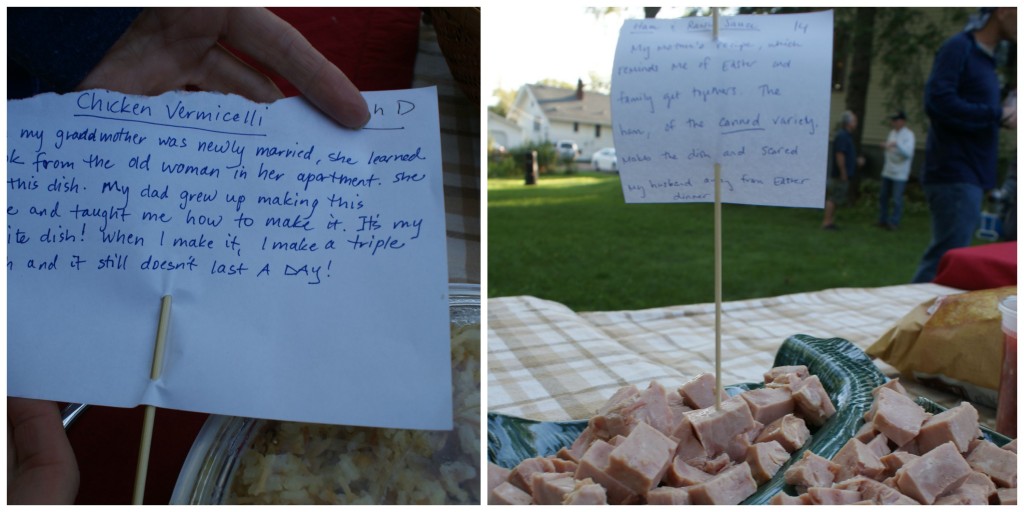 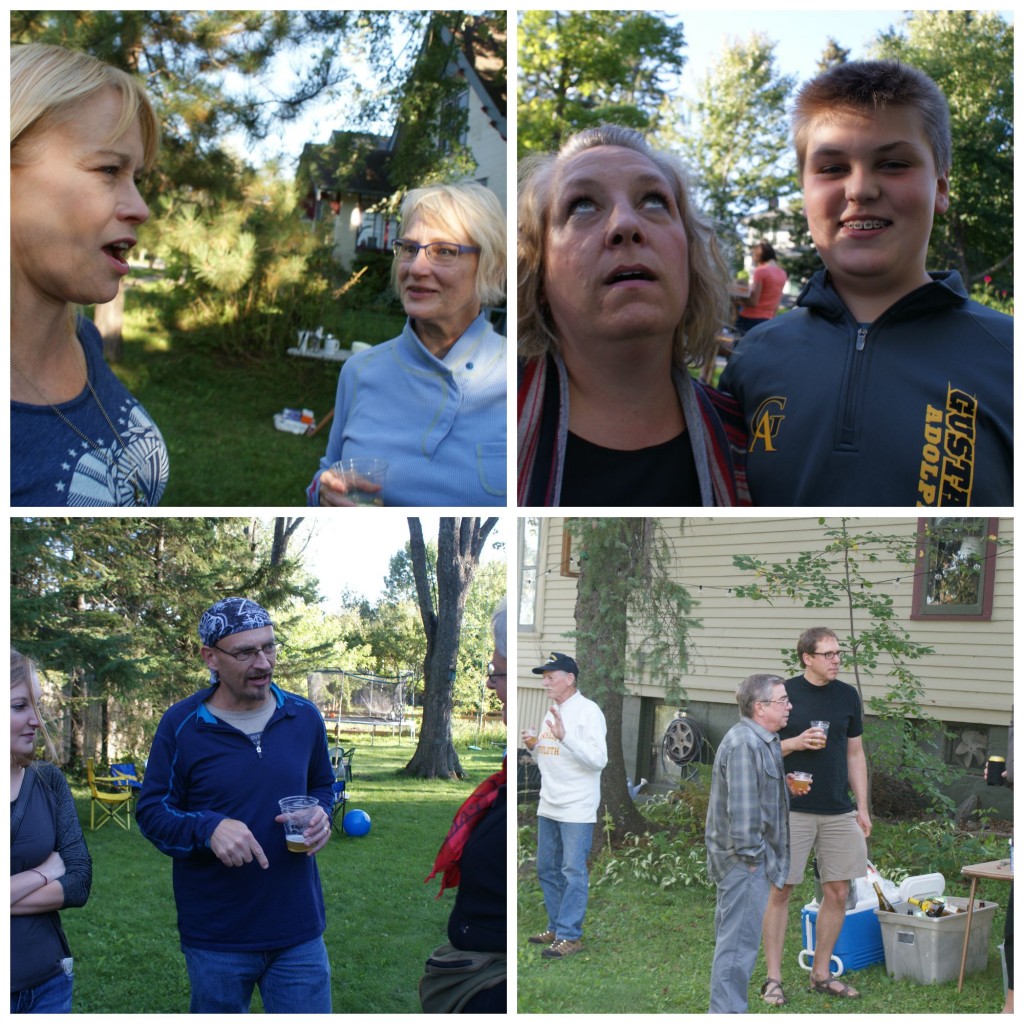 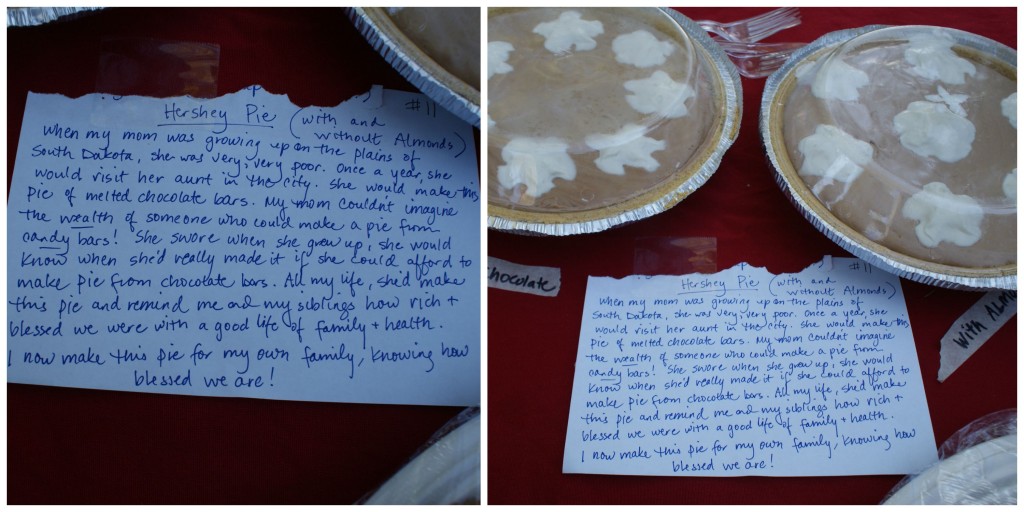 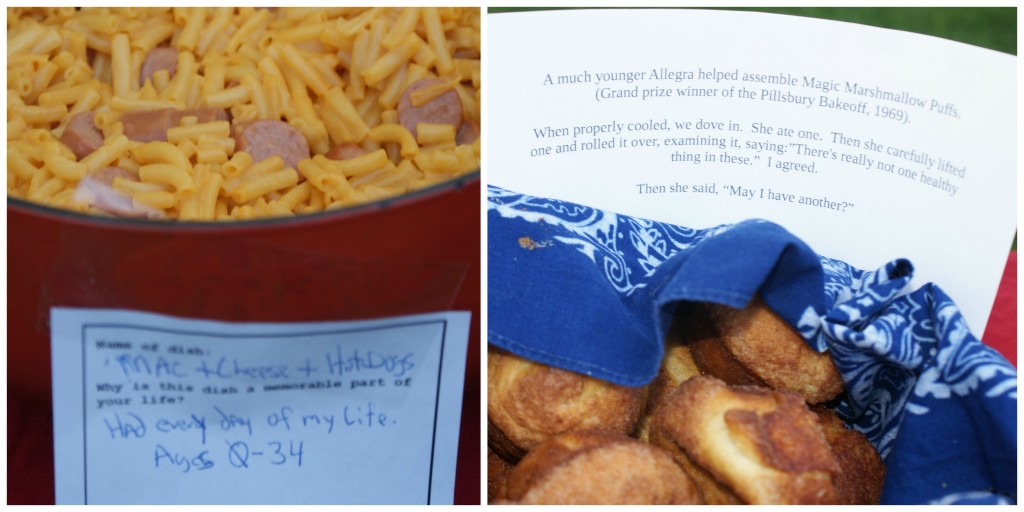 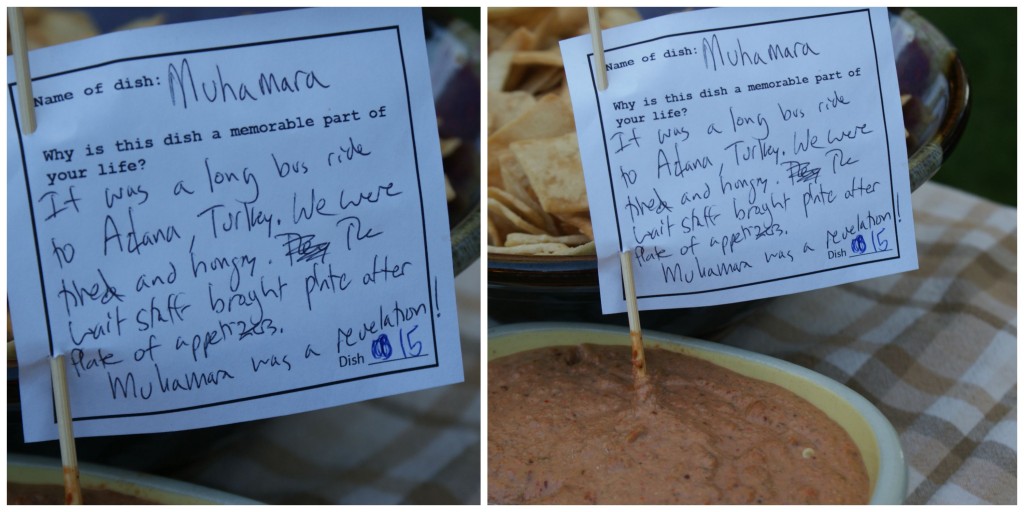 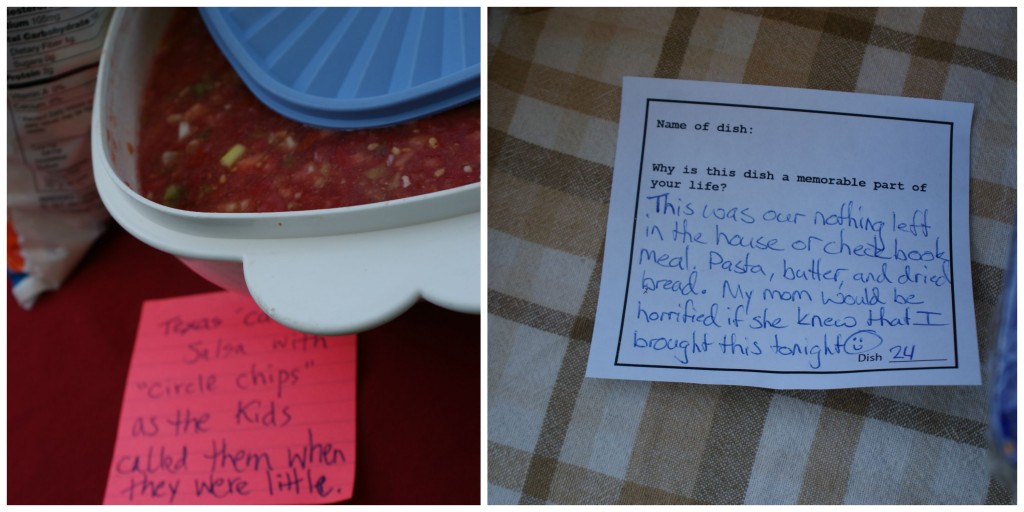 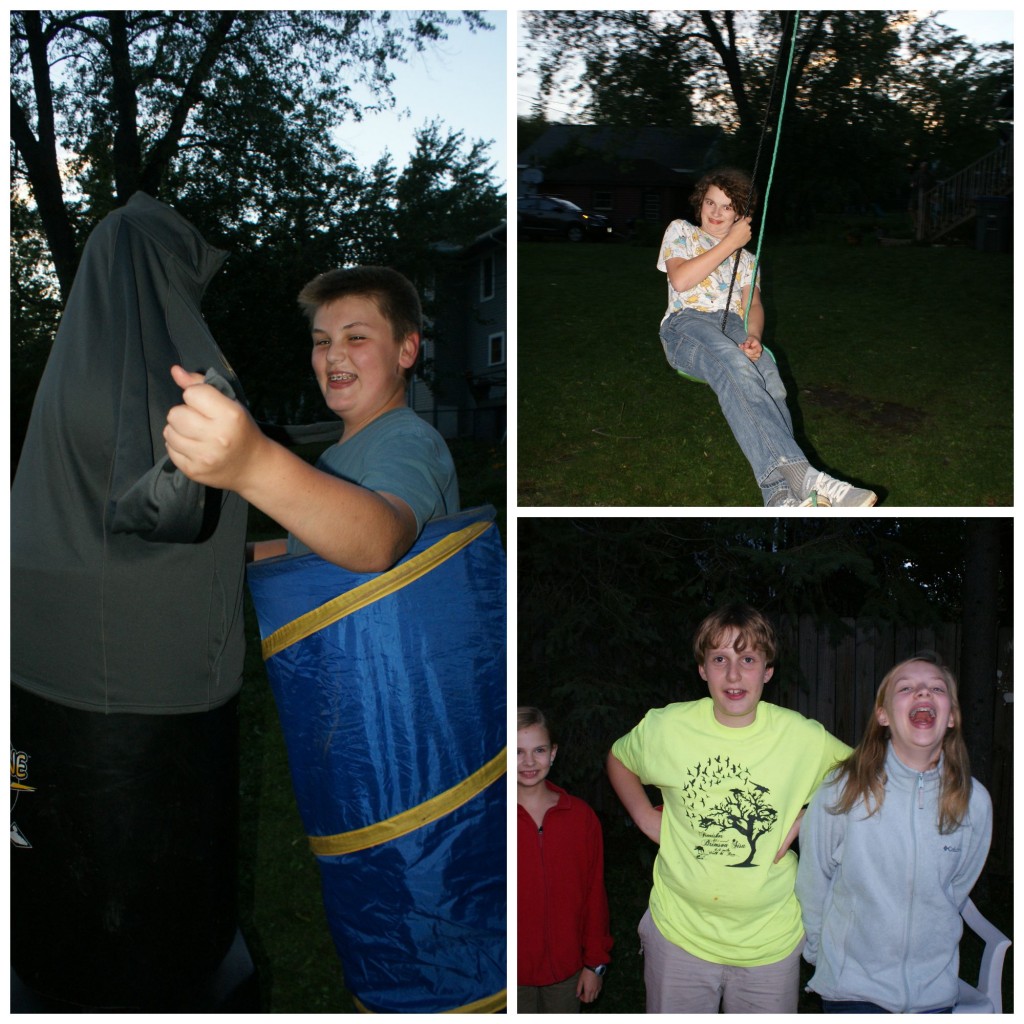 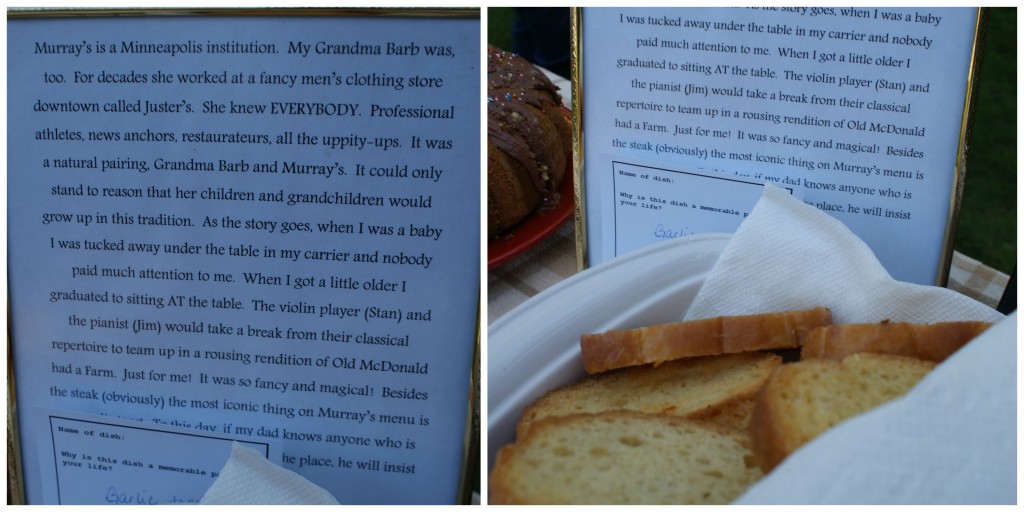 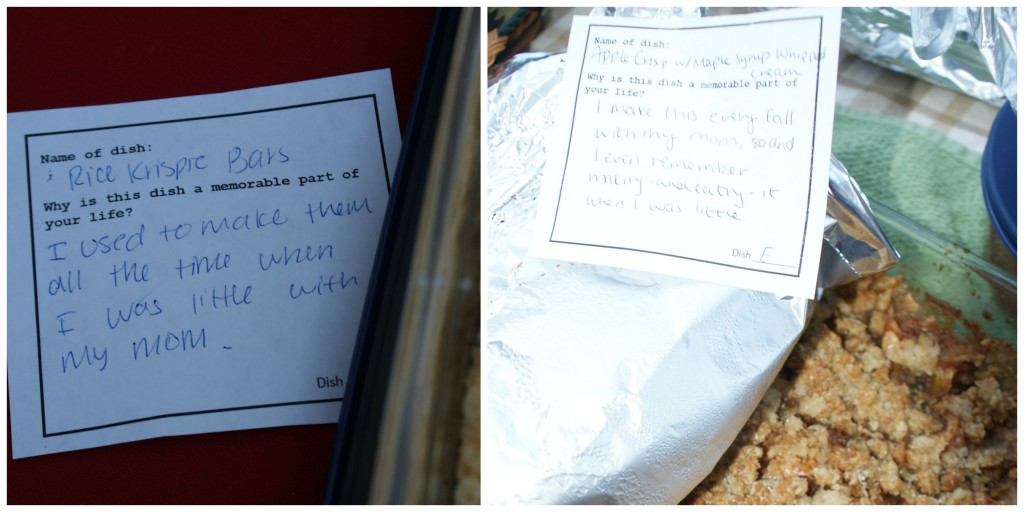 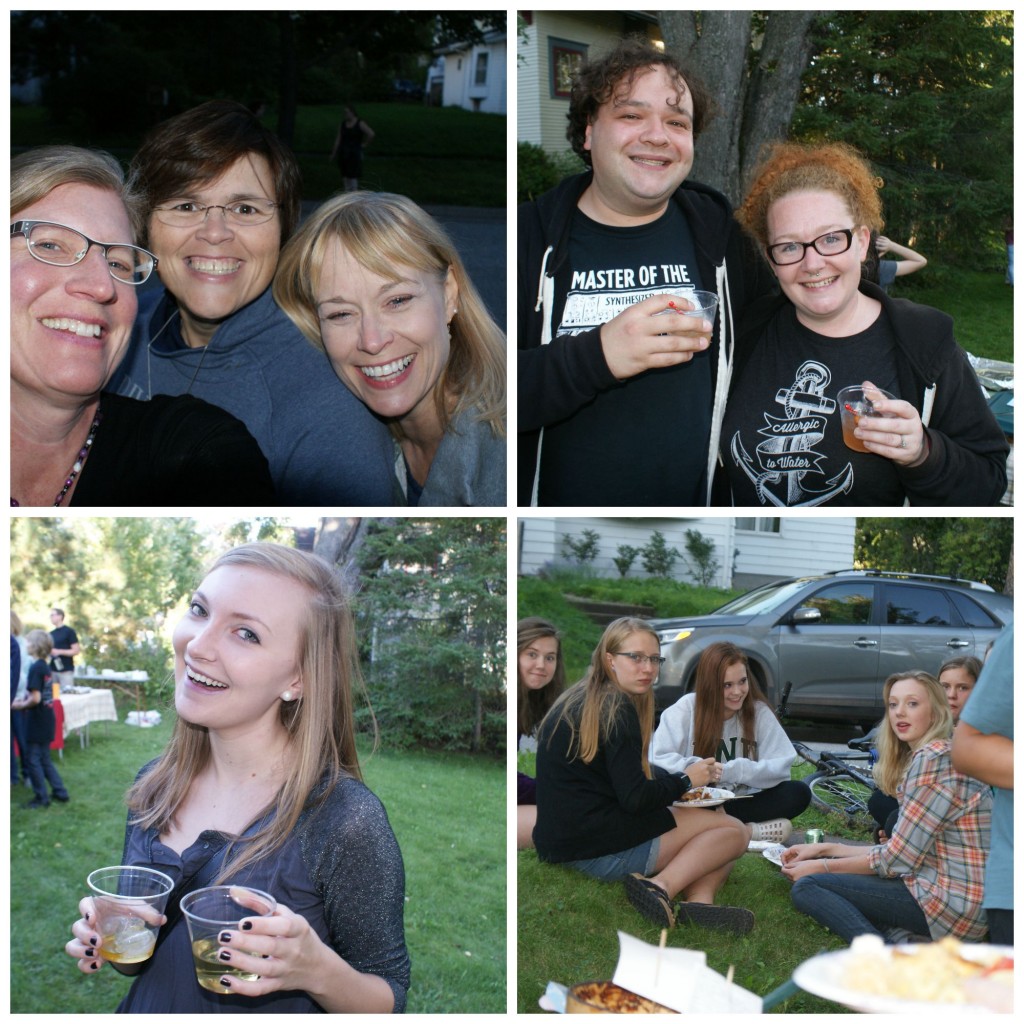 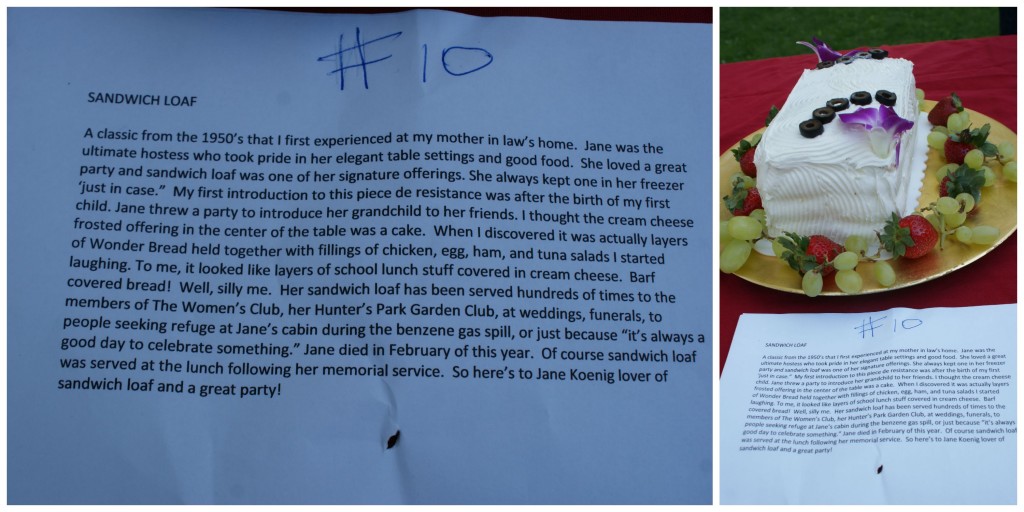 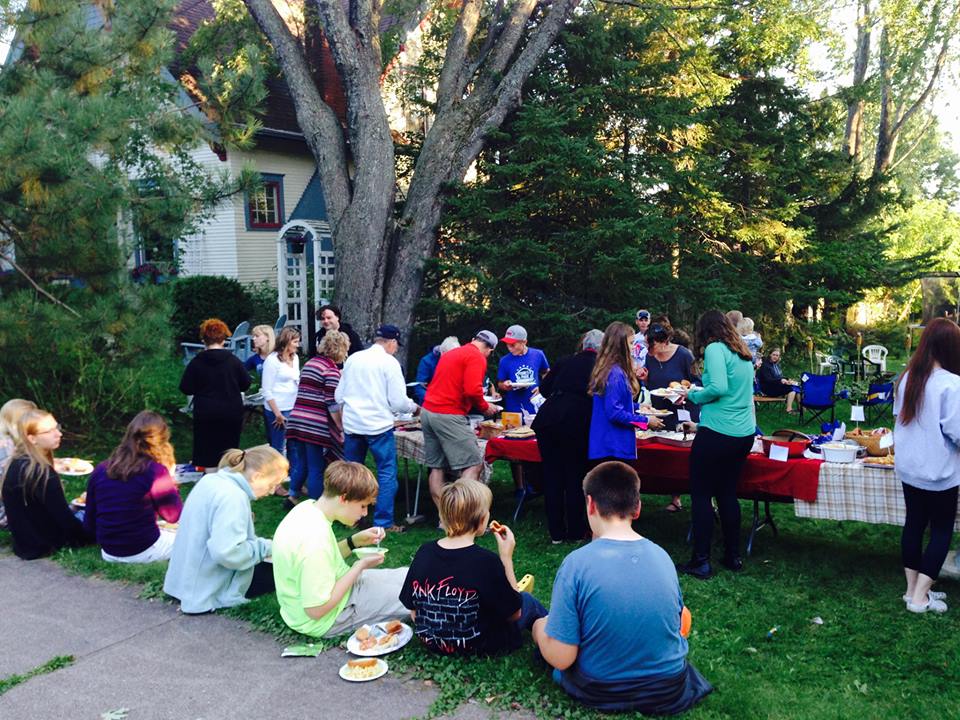 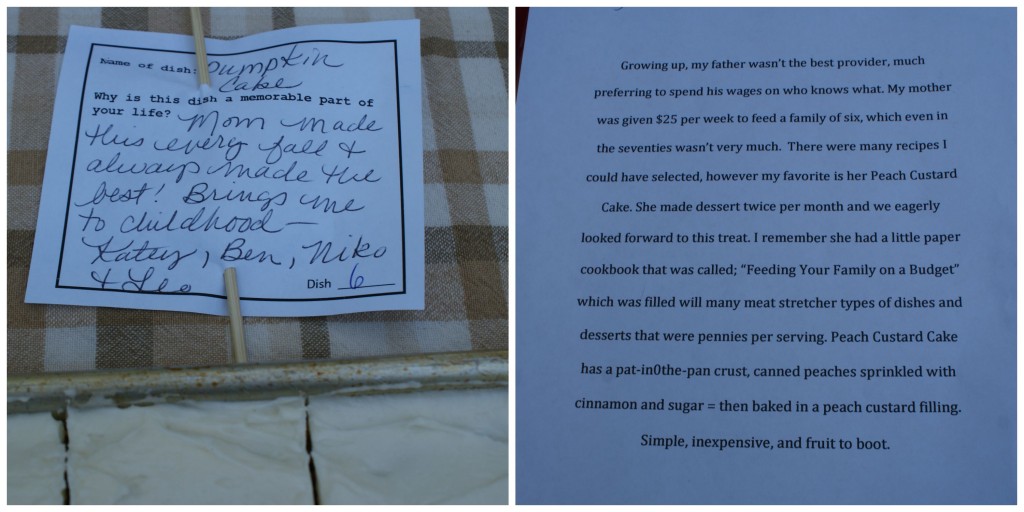 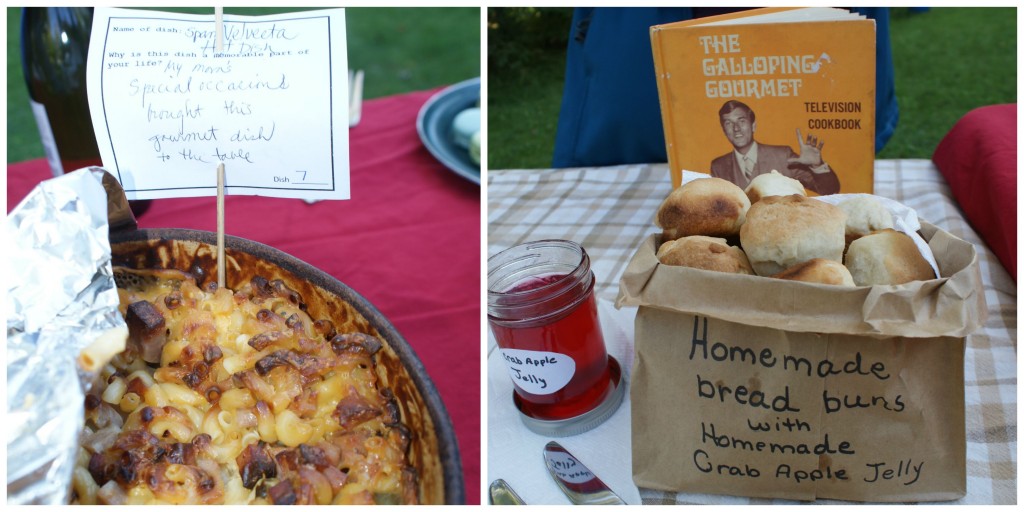 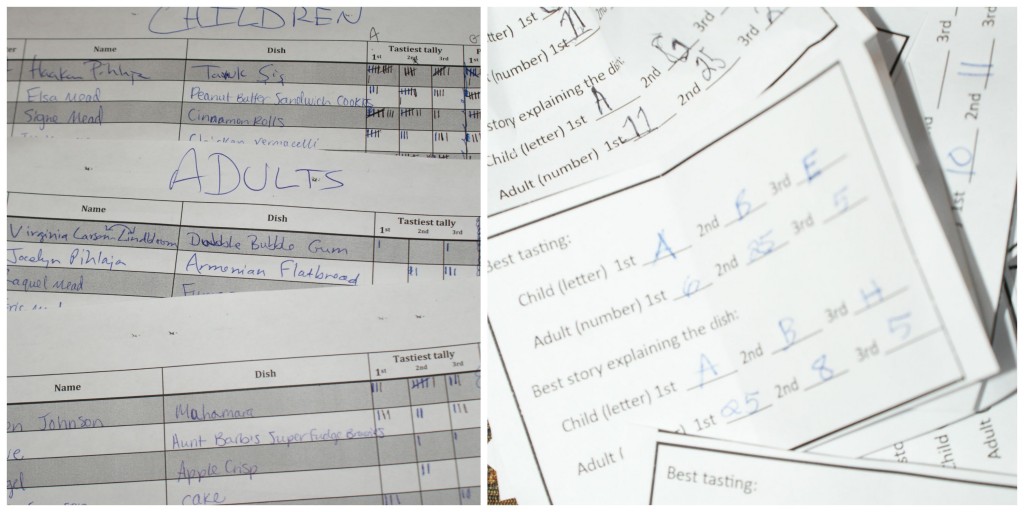 When the votes were tallied at the end of the evening, we had our winners:

Best Taste: Paco, for his Turkish chicken shish kebab (one of the few proteins on the table) 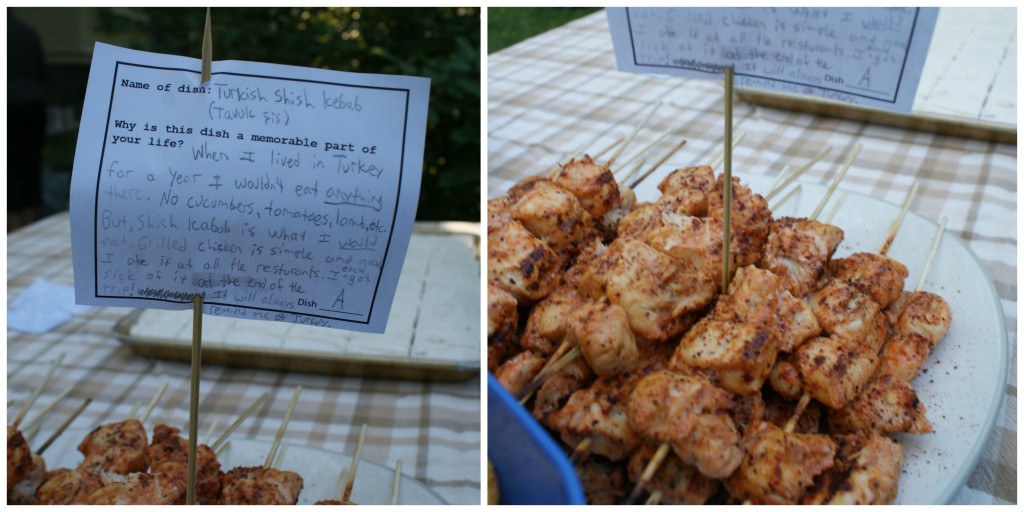 Best Story: Emily, for her story of Goofballs. Her great-grandma always made Goofballs; they were a family standard particularly loved by Emily’s uncle. This uncle suffered from mental health issues that resulted in his life ending prematurely. At the top of Emily’s sign of explanation was a mirror, so each person taking a Goofball from the tupperware container saw him/herself reflected: a real goofball. As a poignant epilogue to her story, Emily’s great-grandmother passed away a few days after the potluck. It is lovely that Emily’s dish received recognition, as it proved that food is love; food is memory; food connects us through the generations. 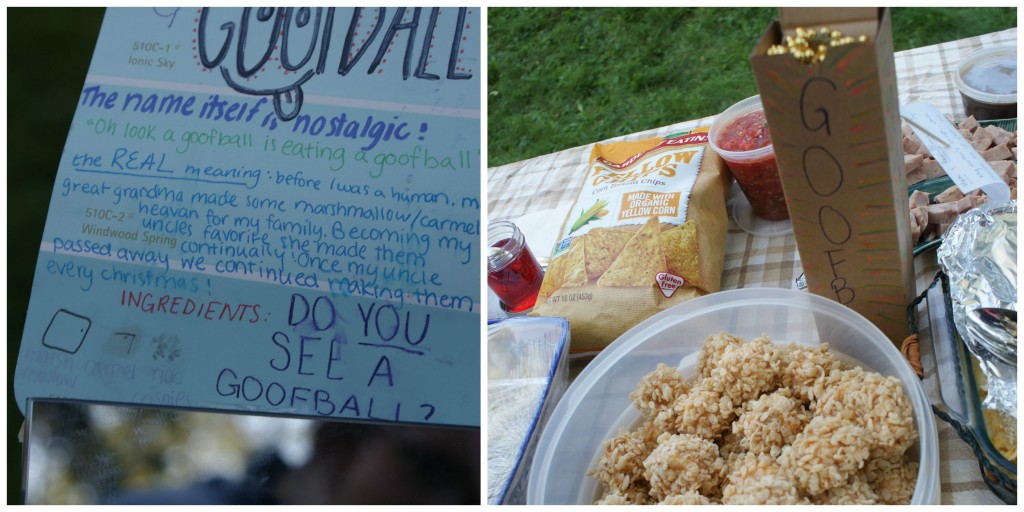 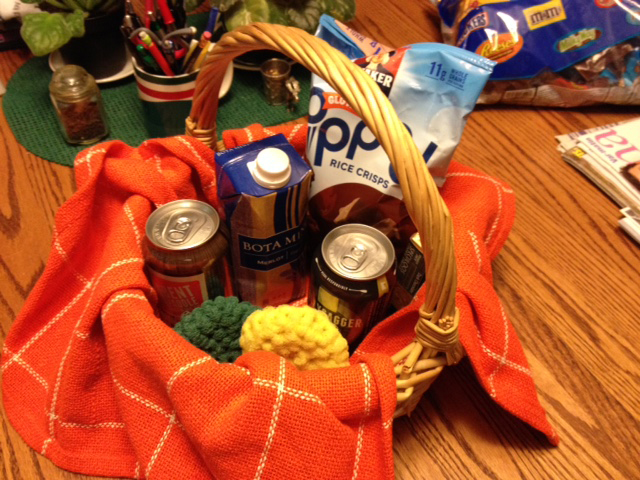 Best Taste: Aunt Phyl (who also won last year for bringing shredded pork under a brick as tribute to “The Three Little Pigs”) for her Magic Marshmallow Puffs, which are essentially a marshmallow wrapped in a crescent roll, all sprinkled with sugar and cinnamon. Again, it was a delight that Aunt Phyl won–since she’d whipped together her offerings after spending a few days in the hospital worrying about her husband. All Hail The Caretakers!

Best Story: It was fitting that the Best Story award went to the best storyteller I know: my beloved Virginia. More than one friend and neighbor were charmed by her that evening. Her story, below, won her a crowd of fans, for it reminded all of us, standing there on the lawn in the gathering darkness–a group held rapt by her voice as she read her tale–that coming together in fellowship, that standing shoulder-to-shoulder with good people, that sharing stories with friends and strangers, that giving over to the flow of conversation and food and laughter, that the togetherness generated when we extend and accept invitations

are some of the greatest gifts of our lives. 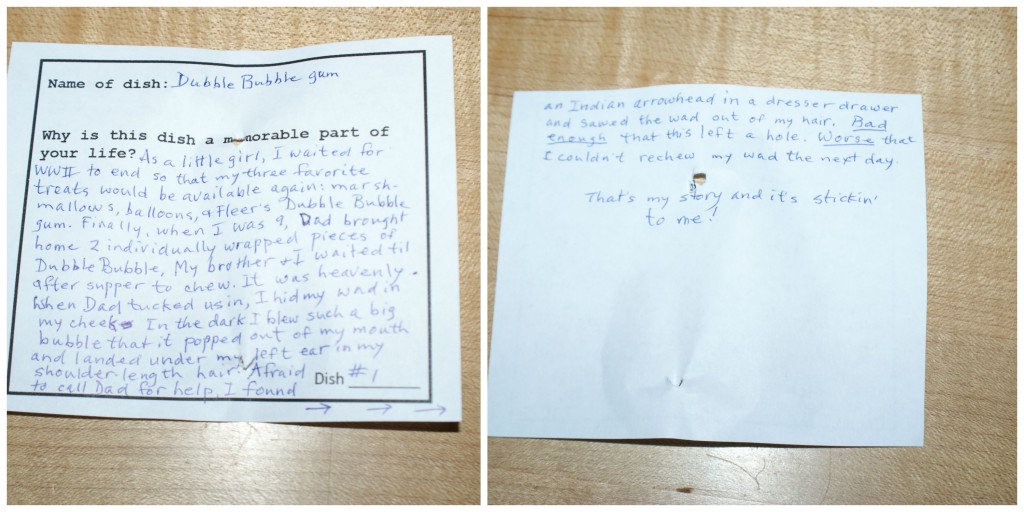 As a little girl, I waited for WWII to end so that my three favorite treats would be available again: marshmallows, balloons, and Fleer’s Dubble Bubble gum. Finally, when I was 9, and the war had been over for one year, Dad brought home 2 individually-wrapped pieces of Dubble Bubble. My brother and I waited until after supper to chew. It was heavenly.

When Dad tucked us in, I hid my wad inside my cheek. In the dark, I blew such a big bubble that it popped out of my mouth and landed under my left ear in my shoulder-length hair. Afraid to call Dad for help, I found an Indian arrowhead in a dresser drawer and sawed the wad out of my hair. Bad enough that this left a hole. Even worse was that I couldn’t rechew my wad the next day.  (hairball)

That’s my story and it’s stickin’ to me.

If you are interested to know more about Virginia, here is a post I wrote about her during the year Byron, the kids, and I lived in Turkey: “To Feel the Sun from Both Sides”