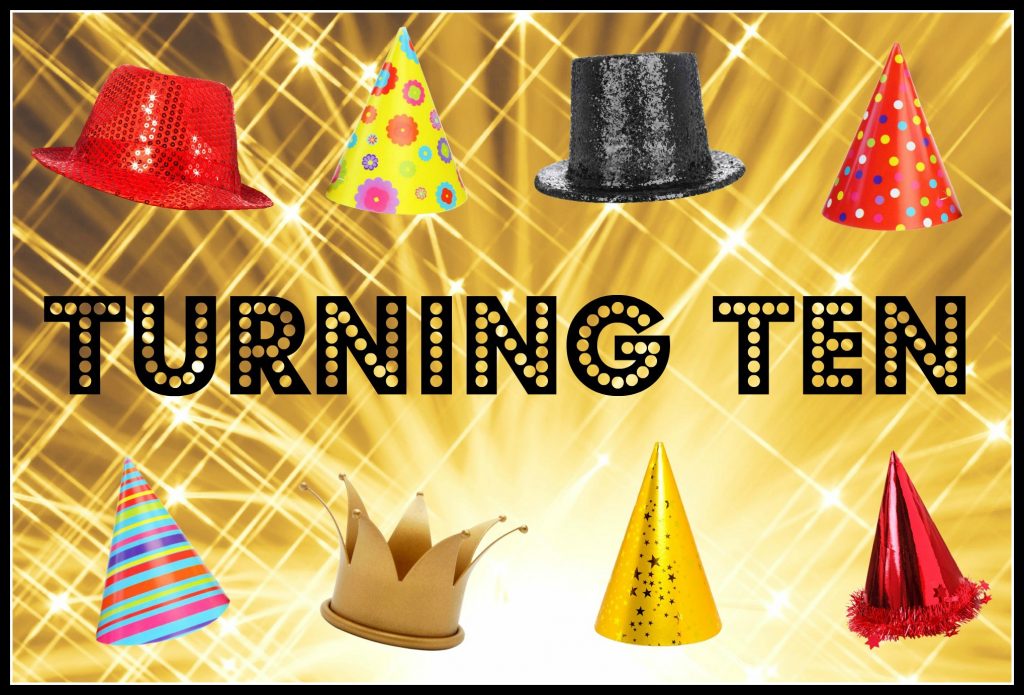 Ten years ago this week, I posted for the first time to this blog. Ten years. That’s like high school plus college plus graduate school.

It was the start of a new semester, and I’d had the revolutionary idea to ask one of my composition classes to try out this new thing — “blogging” — in the hopes that writing assignments would feel more authentic when actually published where other human eyes could clap onto them.

Then the semester ended, the students roared off into their respective futures, and I kept writing little stories and snippets and nonsensicals, putting them on my blog, and feeling simultaneously motivated and lonely.

One day, a person I didn’t know — a person not a student in my class — left a comment. Her name was Kristin, and she lived in Scandanavia. Then Kristin told one of her blog friends, Lilian, that she should come check out my writing; so then Lilian, in Quebec, started leaving comments on my posts. I couldn’t believe such an amazing and glamorous thing was happening.

After that, I visited their blogs and left comments, and then I left comments on the blogs of people who read their blogs, and then those people visited my blog, and out of nowhere, a beautiful momentum had taken hold, and I had A New Tribe, one that felt more close and caring than many “real” people in my life.

A few years after that, a lot of bloggers started nailing CLOSED signs onto their blogs, for a variety of reasons, and the comments and interplay started tapering off. Still, though, I felt the stories and snippets and nonsensicals burbling up inside of me, and the blog still felt like the right repository, meeting my needs and purposes. At the same time, other forms of social media kicked up, and I discovered that nearly all of my favorite current and former bloggers and I could connect on Facebook.

Sometimes, people would share links to my blog on Facebook, and eventually, I got a message from someone, Alexandra, who waxed enthusiastic about my writing, who told me I should try to reach a larger audience, who showed me channels for submitting my work to sites Not My Own.

The years passed, and still I wrote on my blog, to suit myself, and I wrote other pieces — stuff that challenged me with word counts and editorial expectations and forced me to sculpt my skills — and between the two, I learned. I made connections. I realized a whole lot of things. I found my people. I pissed off people. I got sick of people. I loved people.

The key to continuing to write, to not shutting down, to posting again and again, even when no one really cares or when I know what I’m turning out isn’t so good or when someone is giving me a deliberate and mean squint-eye, is simple: I like to write. Sure, it’s a powerful experience to have an audience, but even if no one’s looking: I like to write. With a blog, I have a place to experiment and make mistakes and throw sand in the air and be really dumb and occasionally stumble across something meaningful. Even when I make mistakes, I like to write.

At the same time I’ve been engaged in this surprising and transformative journey, I’ve made a heap of bloggy friends, meeting a few face-to-face, and we’ve exchanged gifts, private chats, and support in tough times. I had no idea when I started the engine in this rig back in 2006, but the blog world is a compassionate, generous-hearted community.

Now, a decade later, I’m still blogging; I still love this space. It’s the start of a new semester, and although I’m not having my composition students blog, I am teaching Writing for Social Media, a class I was able to envision and propose, thanks to all I learned here. Students in the course tweet and Facebook and blog — and, as of this semester, because I’m all about pretending I’m having a new revolutionary idea, they are also each in charge of doing a “takeover” of a class Instagram account for a day.

No matter how you splice it, I’m grateful for the connectivity of a modern technological world. It’s, to be boring and cliche (after ten years of yammering, I’ve run out of original words), made me better.

In case you are reading this now and aren’t named Kristin or Lilian — in case you haven’t been here since the beginning — I’d love to direct your attention to a few of my favorite posts from the past ten years. Many times in my posts, I’ve been too “try hard” or have been an out-and-out idiot. Unintentionally, I’ve gotten things wrong. Occasionally, I’ve gotten things too painfully right. I acknowledge these difficulties.

At the same time, I’ve been someone who created a space for herself and then showed up in it, again and again, fiercely, dumbly, enthusiastically, wistfully, angrily, joyfully.

Ten years of stabbing repeatedly at a blank, white, yawning expanse, filling it with font and doubt and flourishes.

I click on “All Posts,” and 733 entries pop up. Without blogging, there would be zero.

And to all of you who have visited, read, left comments, and supported this space: thank you.

Below is a sampler of some of favorite posts from the past ten years. Each post takes me back to a specific moment where I had something I needed to get out of me. Maybe, if you have a minute, you’ll click on one or two that you haven’t yet read.

Here, then are posts: